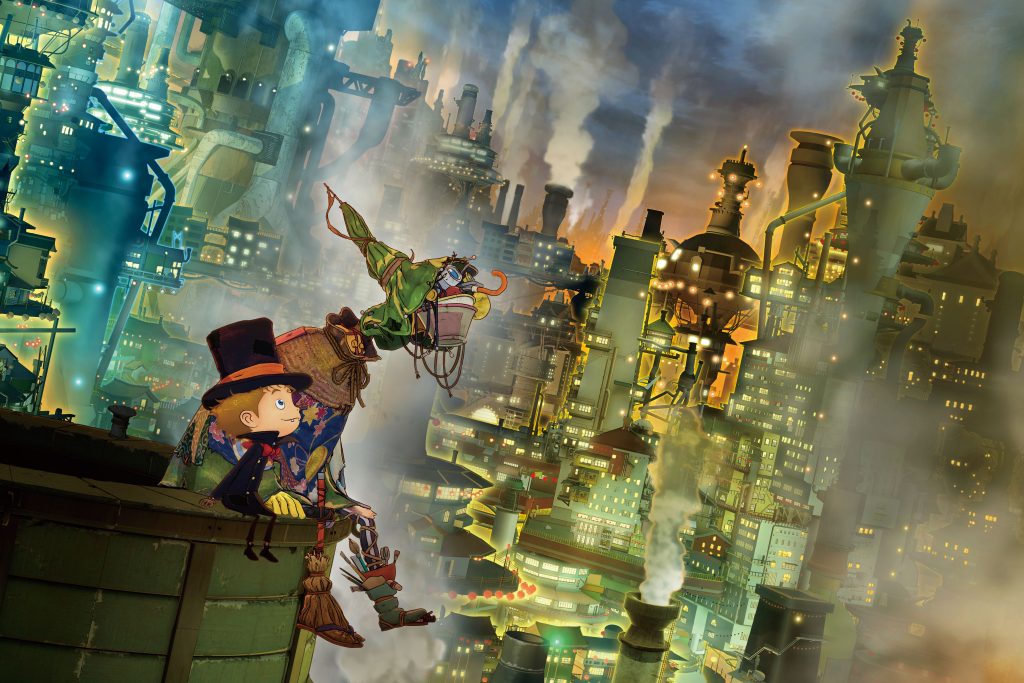 In a city hemmed in by towering walls, where chimney smoke clouds the sky and patrolling Inquisitors ruthlessly shut down any hint of the outside world, one young boy wants nothing more than to see the stars. Meet Lubicchi, whose head is filled with the stories his dad told about the “Town of Night’s Last Night,” and the brave Poupelle, explorer of a world beyond the sea of smog. However, as everyone else in Chimney Town never fail to remind the boy, stars aren’t real. Lonely and friendless, Lubicchi spends his days hauling himself up tall ladders with shaking legs, facing down his fear of heights to be closer to the stars.

That is, until Lubicchi rescues a pile of trash from the unfortunate fate of being dumped into an incinerator. Well, not any pile of trash: a man, with a green umbrella head, a bucket jaw, a camera shutter eye, and a glowing red orb as its heart. Instead of handing the garbage man to the Inquisitors or abandoning it, Lubicchi asks the man to be his friend. He christens the garbage man Poupelle, and boy and garbage fast become close friends, dreaming together about a star filled sky.

Based off of a children’s book by Akihiro Nishiro, Poupelle of Chimney Town is a whimsical, kid-friendly adventure in a beautifully drawn fantasy world. Ultimately, the film contains a touching and emotionally resonant story, though some of its animation and storytelling choices leave something to be desired.

Perhaps the biggest strength of Poupelle is its core characters, who are the most memorable of the cast. The mild-mannered Poupelle treks after Lubicchi like a caring old grandpa, exuding care and empathy. The disappearance of Bruno, Poupelle’s hulking and gentle storytelling father, sets the stage for the film’s most potently emotional moments. And the gap-toothed Lubicchi is an adorably innocent protagonist; voice actor Antonio Raul Corbo captures the boy’s unwavering spirit in a touching and genuine performance. Ultimately, Lubicchi’s stubborn refusal to quit his hope of a smokeless world, despite the constant negativity and pushback he receives from the society around him, will deeply resonate with many who also wish for a better world.

Furthermore, the movie’s steampunk-esque aesthetics are captivating. Despite being a sooty, dark, smoke-filled hole in the ground, Chimney Town is gorgeous. Dense stacks of metal buildings, windows glowing with life, tall chimneys shrouded in billowing smoke, and even the dark pits of the garbage dump are all rendered with an astounding amount of detail. The art style is especially effective at one particular moment at the film’s climax, adding an additional emotional punch at a critical moment. The color palettes are well-chosen and atmospheric, such as the warm furnace-like orange that fills many of the aboveground Chimney Town scenes, giving Lubicchi’s scrappy town a homey feeling.

It will sound contradictory, then, to say that the movie simultaneously feels visually stilted. The problem is that fantastic background art does not make up for character animation that is not quite as expressive as the plot, which contains a number of humorous moments, needs it to be. Each character seems to rotate through a set number of expressions—cry, look sad, look happy, look worried—without much variation. Of course, it’s not fair to compare an animation to still images in a book it was based off of. However, lively and fluid expression is a hallmark of anime—such as in comedy anime, where a character’s uniquely drawn expression can become a joke in itself—and would have much improved the film’s jokes, which sometimes fall flat.

This disjunction may be due to the difference in how the characters and landscapes are rendered. Poupelle is Shin Godzilla CG director Yusuke Hirota’s first feature film, using his 3D expertise in an animated production. Unfortunately, the character animation bears many hallmarks of 3D animation: awkward pans and tilts that stiffly swing around characters, stilted facial expressions, washed out coloring, a high frame rate that makes character’s movements seem unnaturally smooth.. However, this style does not mix well with the traditionally drawn landscape; as a result, the characters lack visual depth, sometimes seeming like paper cutouts superimposed on a vivid background.

Aside from the somewhat stiff animation, Poupelle also juggles a few too many characters, plot points, and worldbuilding devices, with little time to develop them. Intriguing side characters, such as the anti-Inquisitor flamethrower wielding Lola, tend to show up for their important scenes and disappear; Lubicchi’s society is never quite fleshed out. This is not helped by the English dub dialogue, which is often particularly basic: characters often say the most basic version of what they’re trying to express, to the point where some lines in the dialogue are predictable. This tell-not-show approach leaves worldbuilding and minor characters less space to make a memorable impact in the little time they are allotted to begin with.

To be absolutely clear, this is not to say that Poupelle is a bad movie—far, far from it. However, it does come from an animation tradition with high standards; after all, Japan is the home of Mamoru Hosoda and Hayao Miyazaki, directors who have produced gorgeous children’s films which resonate with all ages. A more detailed character art style and a better fleshed out world certainly would help it cohere both visually and storywise. Regardless of these considerations, Poupelle is an effectively poignant and emotionally resonant journey on its own, sure to inspire those of all ages who, like Lubicchi, strive to reach the stars.

Poupelle of Chimney Town is currently playing in select theaters across North America. 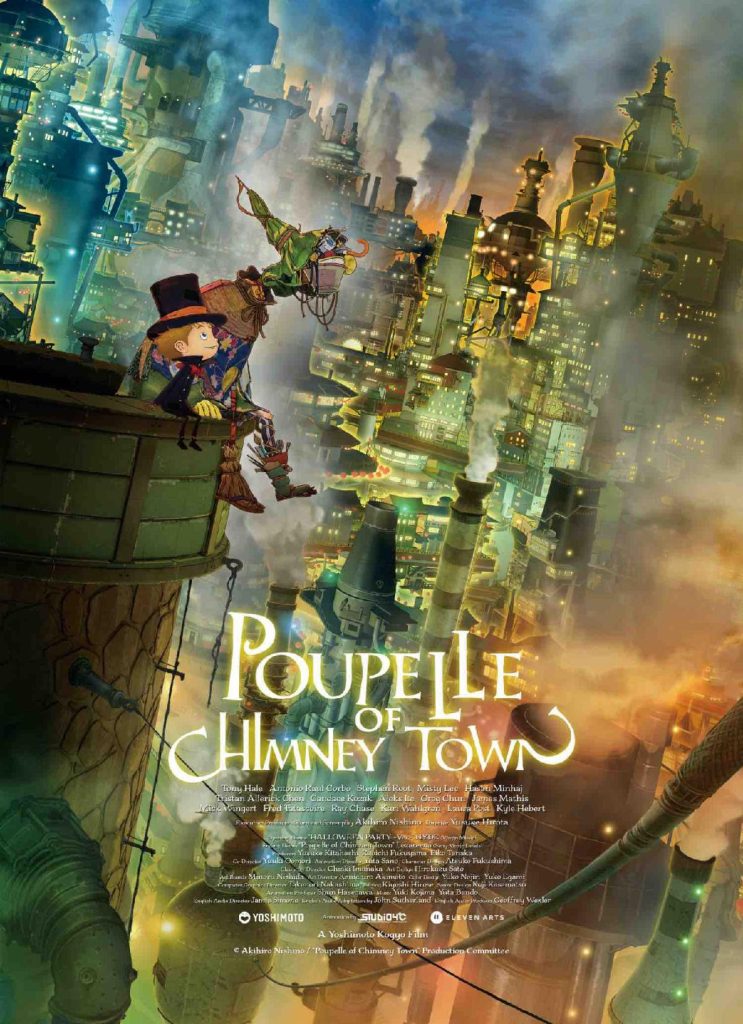