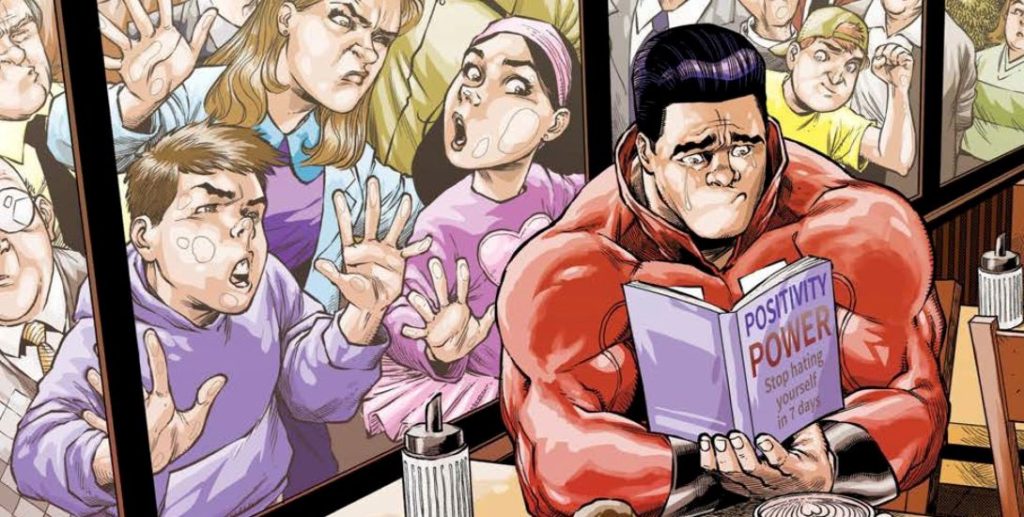 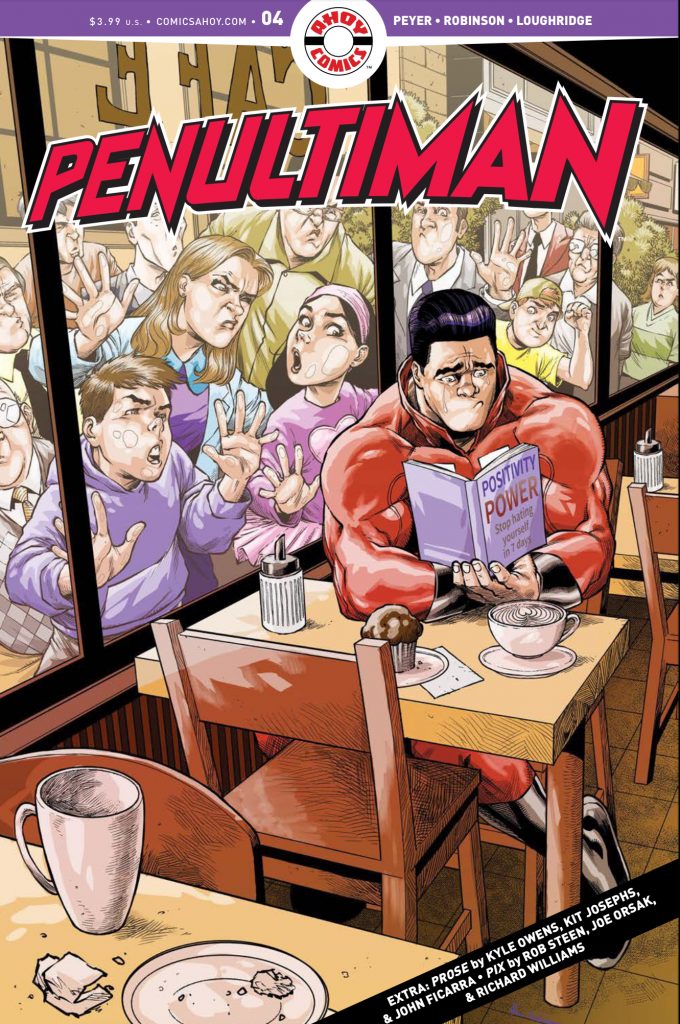 Imagine you had a friend who was struggling with self-esteem issues. Try as you may, you cannot seem to help them. In fact, you seem to be making things worse instead of better. After time, your inability to help starts to make you start to doubt YOURSELF. That appears to the space that AntePenultiman is encompassing as Issue 4 explores.

As issues One through Three have detailed, PenultiMan has not recovered from being basically cast out from his home world. This rejection had set him on a course of self-doubt that threatens to swallow him up. However, it’s not like he’s not trying to find his way. Self-help books are piled up next to his bed. All extolling various avenues of self redirection. None of which have helped. In fact, it has put him on the outs with the one group of people who were on his side. his human fans. Much to the chagrin of AntePenultiMan. After visiting PenultiMan, he sees that he has failed to get any better. However, he warns him that he should avoid doing anything more to “damage the PenultiMan brand.” If he does, he will be punished. 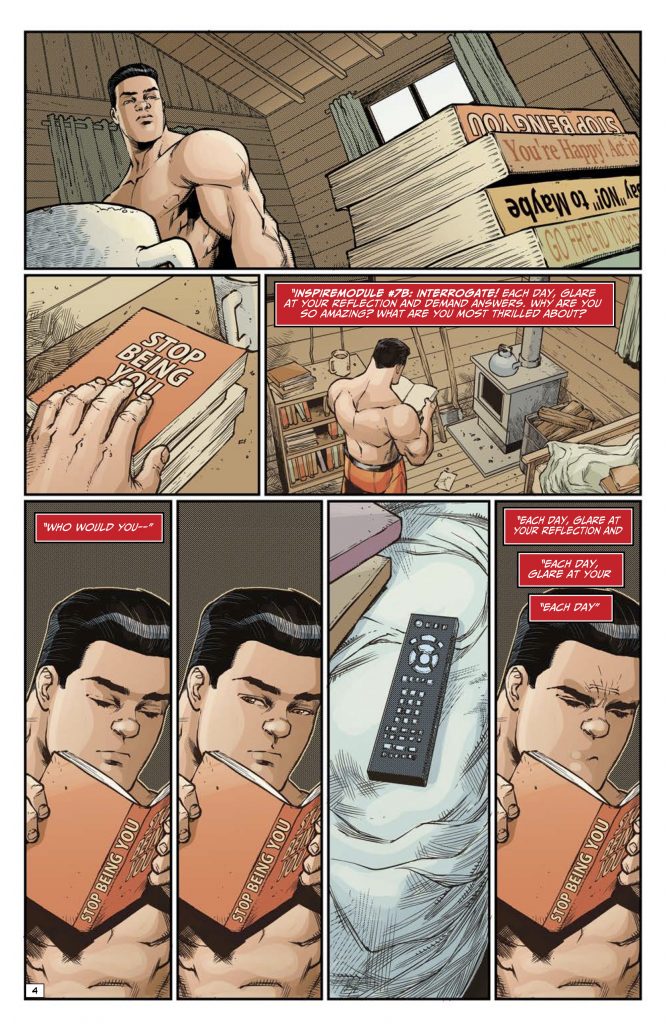 So that is what things have come to. The creator is being threatened by his creation for bad behavior. It gives AntePenultiMan no joy to make such ultimatums. In fact, he perceives that his inability to help PenultiMan as a failure on his part. Self doubt apparently is as contagious as COVID 19. 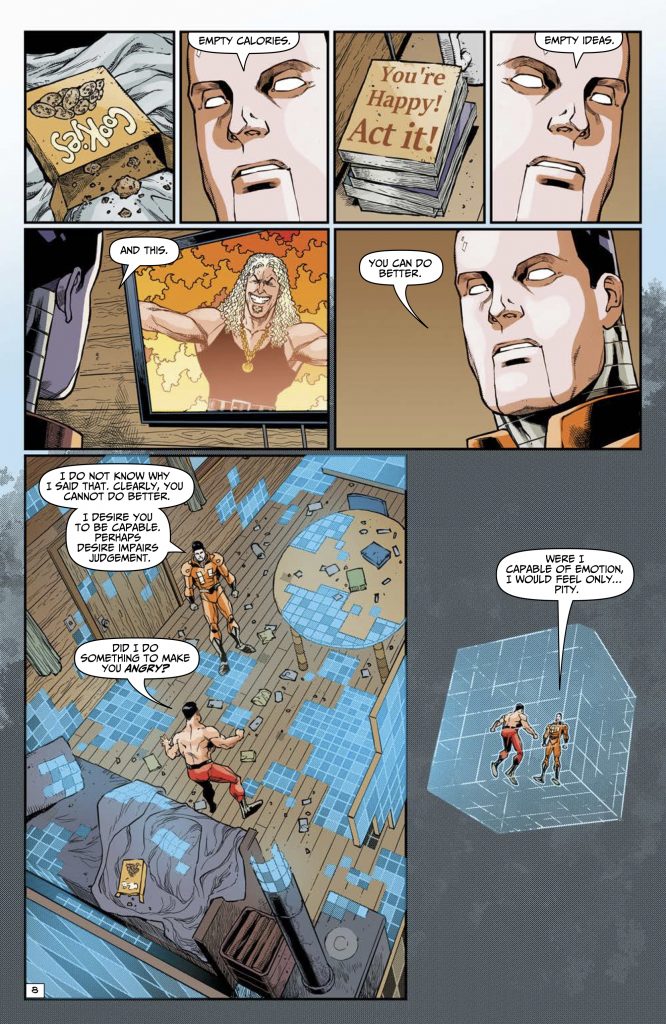 In order to try to resolve his inability to assist his creator, AntePenultiMan decides to build his own assistant, just as PenultiMan built him. As he proceeds with his PreAntePenultiman, he explains the problems that PenultiMan is suffering from and the resulting self-doubt he finds himself engaged in. To that end, after talking to his creation in progress, he realizes that to help PenultiMan, he must first be torn down completely. Fortunately, judging from previous events, there might not be far to go.

As I continue to read Tom Peyer and Alan Robinson’s stellar series, I find myself having a great deal of empathy for both PenultiMan and AntePenultiMan. With a family member who suffers from depression, I can sort of see where PenultiMan is coming from.

Self-Esteem issues are real and can be debilitating. By the same token, I also can relate to AntePenultiMan. Over time, I have come to the realization that I am ill-prepared to be able to help my family member. I consider myself fairly even-keeled so understanding what might go into feelings of inadequacy have been difficult for me to relate with. As much as I would love to help. Especially for someone I know to be a strong willed person and have a lot going for them. During this story, Tom has done a remarkable job of addressing such issues in a unique and entertaining way. I look forward to seeing how he reconciles PenultiMan’s issues.

Have I mentioned that Alan Robinson has become one of my favorite artists? I’m sure I have. But if not, he is. Panel use, facial expressions, action, Robinson rules them all and his touches of whimsy (see some of the self-help book titles) is made for Tom Peter’s prose. They make such a fine creative team.

Ahoy has always blessed it readers with extra written stories. These are always worth the reading and many have been exceptional. This issue is no different with three entertaining stories. First off,  I have to admit that I LOVED John Ficcara’s “A Life Well Lived?” In it, he extols the virtues of a life lived without partaking in the many things that others might use to define such a life. John’s writing is reminiscent of personal posts that I myself have done. Quite frankly, that’s as high praise as I can think of.  Although…”never been inside a Wal-Mart?” You need to fix that…how am I supposed to support MY bad habits if you don’t shop at the “world’s largest retailer?”

Next, “The Strange Case of Goldy the Goldfish” by Kit Josephs tells the tale of two siblings and a possibly Demonic Goldfish. But don’t let ME put words in its mouth, read the story. The other is “Winter Summer of Fall Springs” by Kyle Owens. A tale told by the neighborhood watch lady who proclaims no knowledge of what she spies on. Ahoy has hit a triple with this set of stories.

Ahoy Comics PenultiMan, Issue 4 can be found where all great comics are sold. If you haven’t read this series, by all means check out issues 1-3.