Sammy Guevara: Moving Up in AEW? 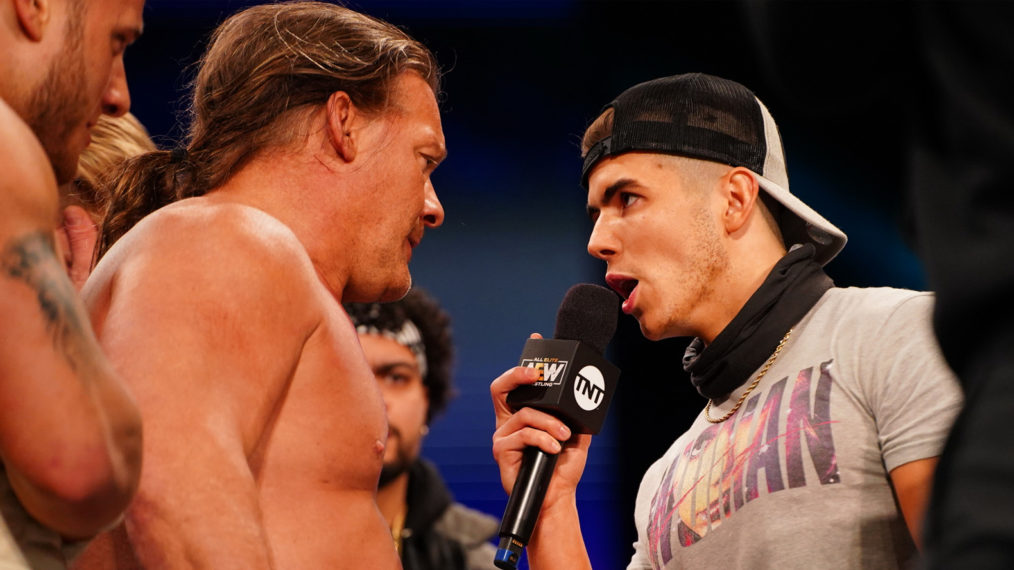 Sammy Guevara did the unthinkable when he quit The Inner Circle. The man known as The Spanish God decided on the February 10 edition of Dynamite that he was done with the faction that made him a star in AEW.

The moment was a long time coming for Sammy’s character, who had been struggling with The Inner Circle’s new status quo. The current environment of the group has been greatly affected by MJF, who has done everything in his power to make life hard for Guevara. But could Sammy’s split be just the beginning of what’s to come?

Think About the Future

Since AEW’s inception, many young stars have had the opportunity to shine. From Darby Allin, to Jungle Boy, to Will Hobbs, one talent after another has impressed on the main event stage. But Sammy Guevara has always stood out from the rest and AEW obviously agreed.

Guevara wrestled the opening match against Cody Rhodes on the first-ever Dynamite. The decision to book that match was questioned by many fans at the time. Those fans were skeptical of the move due to Guevara being a relative unknown in the industry.

Pro wrestling insiders knew he was special however and so did Cody, who believed that Sammy was the future. He saw something in Sammy and now that vision is beginning to materialize.

Guevara’s work with The Inner Circle has been great thus far. Sammy has matured as a performer and he consistently brought his best every time he appeared with the group. Guevara was the villain that fans loved to hate, because they knew that he was having fun embracing that role.

They could see the enthusiasm he brought to his game and they respected him for his work. That respect continued to build over the past year and now the AEW faithful is convinced that Sammy is indeed the future of the company. But did that future begin on February 10?

Sammy’s actions on Dynamite that night directly contradicted what he’s done before. He wasn’t the tongue-wagging, arrogant heel that constantly found himself neck deep in trouble. He wasn’t smiling, he wasn’t laughing and he wasn’t playing games. This Sammy Guevara was all business and he definitely had some business with Maxwell Jacob Friedman.

Sammy played the straight man, even through MJF’s typical nonsense. Guevara wasn’t falling for it and he really never has. He spotted MJF’s insincerity a long time ago, even if the other members of The Inner Circle did not.

Proud and Powerful accepted MJF. The same was true of Jake Hager. The trio did so reluctantly, but it happened nevertheless. Even The Inner Circle’s veteran leader, Chris Jericho, accepted MJF. Jericho has been around for quite some time and he should instantly recognize a con-man when he sees one.

But Chris and MJF became fast friends. Jericho was threatened by Max’s presence in the beginning, but that eventually changed. The truth is that everything changed, including the entire dynamic of the group. Sammy became the odd man out and instead of fighting it, he decided to let it go.

For the first time in his AEW career, Sammy Guevara came off like a babyface. MJF was the smarmy heel and Sammy was the one displaying common sense the entire time. When he confronted The Inner Circle in the middle of the ring, it was obvious that Sammy was at the end of his rope. He kept his words short and straight to the point and he made no secret that he was done.

So what happens now? Does Sammy Guevara embark on a solo career that ultimately leads him to the AEW World Championship? While anything could happen, the fact is that any talk of a sudden skyrocketing to the top is perhaps a bit premature. The storyline with The Inner Circle is likely not over yet, which means there’re more to come between Sammy and his former faction.

But when AEW fans talk about the company in the long term, Sammy Guevara’s name is often mentioned as a future world champ. The idea that he, MJF and Darby Allin will be the top three stars at the forefront of AEW has become universal. Of the three, Darby is the one that has come the furthest so far. But Sammy is now on his way.

It may take some time for him to get there, but Sammy Guevara is a force to be reckoned with in AEW. He has the talent, he now has the reps in the ring and he has confidence that he’s never shown before. Sammy has blossomed as a rising star and there’s no limit to what he can accomplish moving forward. Sammy Guevara is on his way and it should be a fun ride.