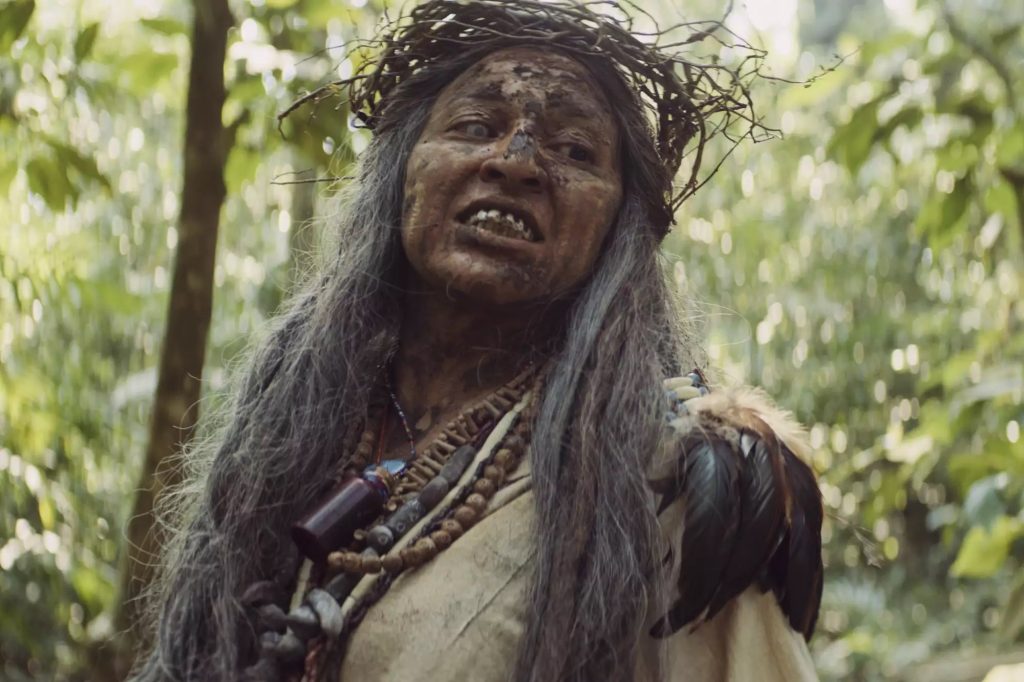 Plot Summary: Satanic Hispanics is an anthology of five short films from some of the leading Latin filmmakers in the horror genre, spotlighting Hispanic talent both in front and behind the camera. In the film, the police raid a house in El Paso and find it full of dead Latinos with only one survivor: The Traveler. When they take him to the station for questioning, he tells them about the horrors he’s encountered in his long time on this earth.

I love horror anthologies, especially when they are made from a very specific and interesting viewpoint. This is why I was so excited to check out Satanic Hispanics ever since I heard of its production. When I heard the director lineup was announced, well, I was champing at the bit to see it. Sadly, this is a mixed bag, and that might be being very generous. The biggest problem here is, with the exception of one segment, all of the shorts feel to various degrees underwritten and bound by the short film format. Even the wraparound segments feel clunky, especially as it pertains to the ending, which is so vague in plot that the viewer has to draw their own conclusion. It is appreciated that each director brings their own voice and cultural viewpoint. I just wish that the writing almost a cross the board was handled with more care. Oftentimes, I felt like I was having to fill in gaps in the plot myself, rather than the filmmakers doing that for me. It also didn’t help the only one of the segments made any kind of lasting impression.

Eduardo Sanchez (co-director of The Blair Witch Project) directs what is easily my favorite segment entitled El Vampiro. The short is far and away the only overtly over-the-top outing that blends comedy with horror. Though tonally it makes it stick out like a sore thumb, it does make a nice refreshing palate cleanser. The core concept is a fun one which finds a vampire dressed in stereotypical vampire clothing wreaking havoc on Halloween night. The catch is, he really is a blood sucker, and this is the one night a year he can feed in public. After all, because of the night of the year, people assume all the blood and body parts are decorations. The complication is, the reckless vampire goes out without realizing that dawn comes an hour later, putting himself at grave risk. This alone would have made for a really solid premise, yet, Sanchez boldly mixes in a romance which blends quite well together. The finale is equal parts savagely funny and tragic.

I fully understand that, to a certain degree, there is a cultural disconnect that has me at a disadvantage here. That’s fine, I completely agree that every piece of media shouldn’t be aimed towards me, and it’s high time we re-center the narrative. Often times, I find myself engaging with films from all over the globe. While some aspects I need to educate myself on, if the film is well written, I should still be able to fully digest and enjoy the final work of art. Every segment does have its highlights in direction, atmosphere and solid special effects, and I certainly don’t want to take away from that. It’s just when I have to fill in aspects (some big, some small) of pretty much every segment, that’s a problem.

Satanic Hispanics is wonderful in its wholly unique spin on horror, but is sadly pretty forgettable despite the talent involved.

Satanic Hispanics had its World Premiere in the Official Selection section of Fantastic Fest 2022.

Satanic Hispanics is wonderful in its wholly unique spin on horror, but is sadly pretty forgettable despite the talent involved.