‘Searching For Mr. Rugoff’ Blu-Ray Review – A Compelling Portrait Of A Man Who Shaped Cinema Culture 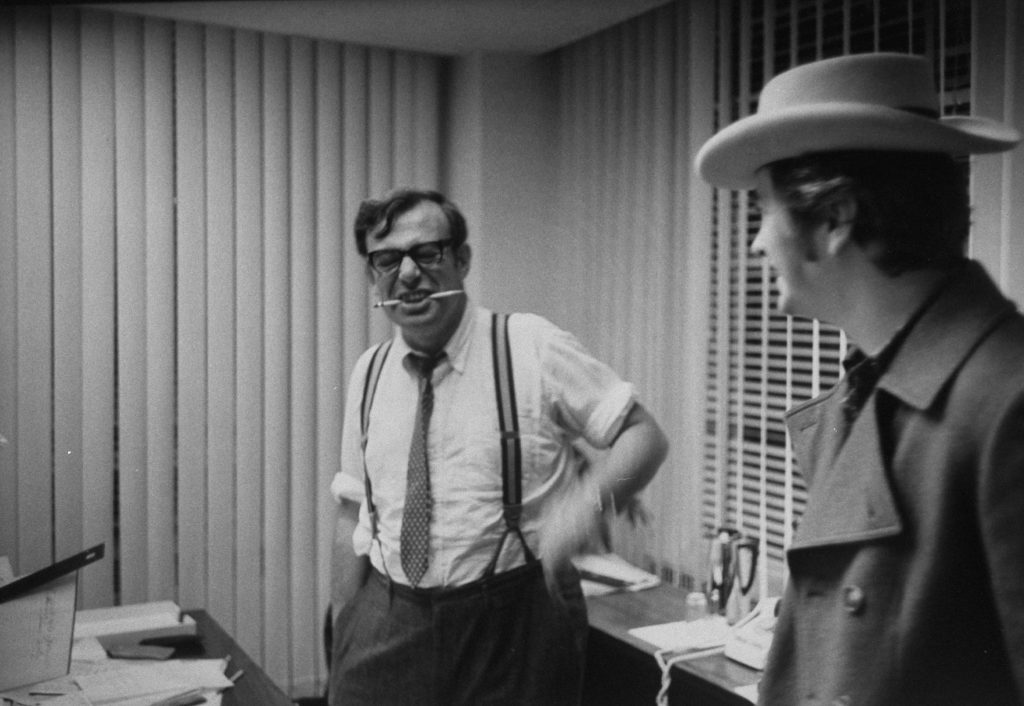 Last year, we took a journey through New York’s theatrical heritage from the gritty 1970s forward in Abel Ferrara’s The Projectionist, a portrait of a charismatic independent exhibitor, Nicolas “Nick” Nicolaou, who was essential in shaping the cinematic landscape of the city. As enjoyable as sections of that movie were, there was a failure in vision which kept it from being the best film it could be. This is where Searching For Mr. Rugoff from industry veteran Ira Deutchman enters the picture as a documentary that proves to be the quintessential version of this story. For as prominent as Nicolaou was, Rugoff seems to make an argument that he was just taking advantage of the opportunities created by another forward-thinking man with a complicated personality.

Donald Rugoff was the mind behind Cinema 5, the mid-century theater chain and film distribution company that helped the bubbling independent cinema scene from the ‘50s and ‘60s explode into the mainstream in a major way. Unfortunately, Rugoff faded away into obscurity long ago; the extent of his legacy in recent years was a passing reference to his career in an awards show speech complete with the furthering of the lore that he was buried in a pauper’s grave in Edgartown, Massachusetts. This did not sit well with Deutchman, who realized he had been influenced by Rugoff more than he ever thought previously as an employee of the Cinema 5 production company. To have a man so towering in the industry reduced to a footnote felt unjust, which inspired Deutchman to investigate what actually happened to the impresario after he lost his company, all the while educating a modern audience why his name should not be forgotten.

Searching For Mr. Rugoff is a film of multitudes. At its core, you are learning the good, the bad, and the utterly bizarre about a man who could sense a potential hit movie with his eyes closed (literally). For cinephiles, the deeper exploration behind his curation of an entire scene will feel like the main course of the feast. Rugoff started off with a strong foundation as he took much of what he learned from his father about owning and shaping a theater and created an experience that would connect with the audiences who were hungry for something novel. By purchasing and shaping some key theaters in New York, including the famed Cinema 1 & 2, he was able to inject a modernist sensibility to the design which extended to the diverse, growing audience who began looking to him as an arbiter of quality.

The key was not just that Rugoff knew what was likely to succeed, but rather he was confident that he could market it in a way that would force people to pay attention. The film takes a fun detour into the aesthetics surrounding a film; Rugoff would place ads in the newspaper just like anyone else, but he used striking images and negative space; the art of theater displays is questioned on the merits of enhancing sales, but is shown to be memorable for many decades later; and we cannot discount inventive street marketing such as employees clomping up and down the streets of New York dressed as a knight to promote Monty Python and the Holy Grail. Film as a foundation for a community is likewise discussed, as film buffs standing in long lines to score tickets to the latest hot title would exchange ideas that would deepen their knowledge and appreciation of the artform.

In addition to pure numbers, the most valuable insight of his impact on the artform comes from some of the filmmakers themselves. Robert Downey discusses the impact Rugoff’s guidance had on his incendiary satire Putney Swope, which had audiences lining up to give a middle finger to the advertising industry. Even more momentous is the care he gave to both documentaries and international cinema. Audiences are treated to relatively recent interviews with both Costas-Gavras, whose iconic film Z was nurtured to the first dual nomination for Best Foreign Language Feature and Best Picture at the Academy Awards, and Lina Wertmuller, the first woman ever nominated for Best Director for her film Seven Beauties. They both admit that they may have never broken through internationally if it were not for some of Rugoff’s more dogged techniques.

Yet, this is not simply a celebration of Rugoff. On the contrary, the film is not afraid to tackle the more prickly elements that made him a prototype for figures like Harvey Weinstein to emulate to even more despicable depths. Deutchman gathers many former employees, many of whom have gone on to bigger and better things in the business, along with other friends and family members to get to the core of who Rugoff was. He was a man who had two secretaries at any given time because there was always a good chance one of them would suddenly quit. He yelled at people, he exploited people. By all accounts he was a disgusting eater and was an absent spouse and father. Even with all of these negatives, he is spoken of fondly by many. He helped shepherd many people to where they are today, and he was fiercely protective of those close to him. He was not a saint, nor was he a complete sinner. It’s the shades of gray that makes him such a transfixing figure, whether you like him or not.

The final piece of the puzzle is the personal journey undertaken by Deutchman to Massachusetts to play detective and figure out what really happened once Rugoff’s penchant for choosing hits fell apart and the industry adapted while leaving him behind in the dust. Unlike Ferrara in The Projectionist, all of the material with Deutchman feels vital and pertinent to the story. You see a man who was once really close to our subject reckoning with his memories of the past while trying to solve this larger mystery. The conclusion is not shocking enough to rival any of the numerous true crime series, but it also is not set up to be the point of the film as a whole. It is a satisfying journey that fits in perfectly with this rest of the material.

For as much broad-strokes history as you may feel you have gotten from this review, it is truly only the tip of the iceberg. Deutchman has crafted a tightly paced, deeply informative and entertaining portrait of a complicated man who is defined by the nuances within these conversations. While this will primarily appeal to firmly established cinephiles, there is enough of a universal truth to this tale that general audiences should find this equally rewarding. The world at large finally has a chance to find Mr. Rugoff.

Searching For Mr. Rugoff comes to MOD Blu-Ray in its original aspect ratio from a great high definition master. The film is a great mixture of new footage with scenes of various films and archival footage interspersed.  The footage of the classic films seems to be the strongest version of it that would be possible, with most of it looking pretty great. The new interview footage looks as technically excellent as it can look in high definition. The transfer appears to have plenty of room to breathe and there are no issues with compression artifacts, banding or other digital nuisances. Black levels are appropriately deep and give way to a nice amount of detail in shadows. Interview segments look crisp and clear depending on the filming conditions with natural skin tones and detailed facial features. The colors featured in the film are natural and vibrant as they provide a nice visual pop on screen on occasion. I do not see how this disc could have been improved visually. It’s a beautiful transfer for those who decide to pick it up.

This Blu-Ray comes with a more-than-capable DTS-HD 5.1 Master Audio track that captures the content perfectly well. The din of the locations they chose to film in provides a nice base texture to the proceedings with ambient sounds placed well in the rear channels. Dialogue is the spotlight of the film, and it appears to be in perfect harmony with competing sounds. While some filming locations are not the most ideal, the track rarely lacks when it comes to clarity. The music is well resolved here as it flows through the room, especially during the closing credits with the perfect New Pornographers song sending you out on a high note. The audio track is not stretched to its limit with this content, but it delivers the information clearly enough to provide a satisfying time. There are no subtitles provided on this disc.

Searching For Mr. Rugoff is a very compelling documentary about a man who no one outside of the most devout fans of theatrical exhibition have probably heard of previously. While this is a shame, this presented an opportunity to explore the highs and lows of a personality who was larger-than-life and complex in a number of ways that may be polarizing but never less than interesting. Filmmaker Ira Deutchman does not take any misguided detours, choosing instead to keep the focus tight and the information flowing towards a common goal. The Deutchman Company has released a new MOD Blu-Ray that features a very strong A/V presentation and even some supplemental features. If you are a film fan who loves to seek out the stories of how cinema was shaped in the past, do not pass this up. Recommended

Searching For Mr. Rugoff is currently available to purchase on Blu-Ray, DVD and Digital.

Disclaimer: Cinetic Media and the Deutchman Company have supplied a copy of this disc free of charge for review purposes. All opinions in this review are the honest reactions of the author.