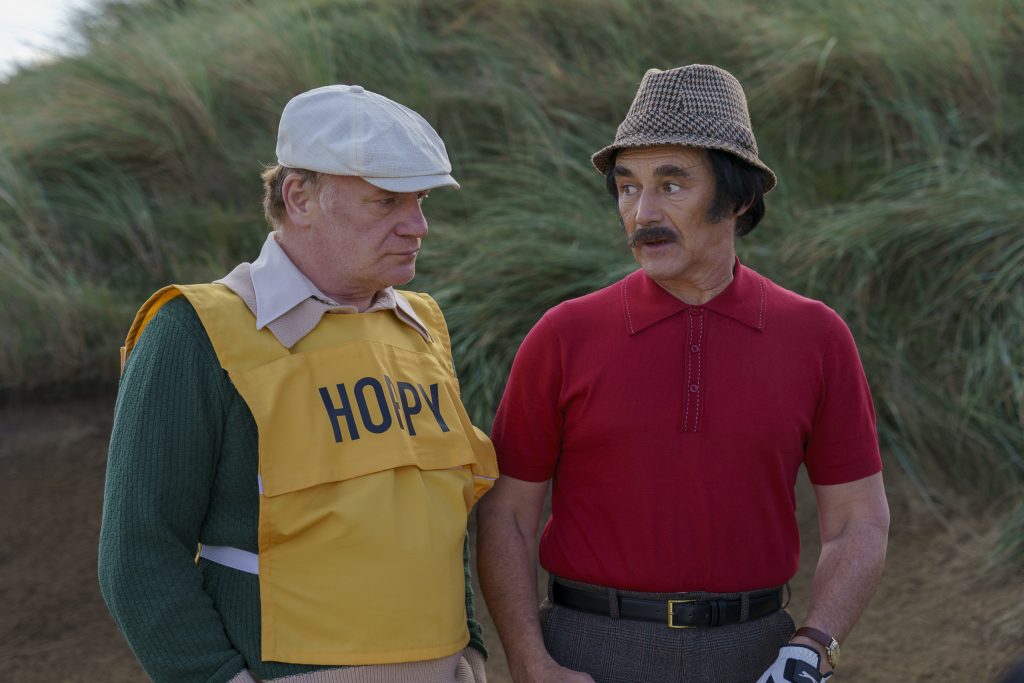 When asked about their collaborative process, director Craig Roberts is quick to begin the banter.

“Simon just gives a lot of orders and you just kind of have to follow, that’s really it.”

“I don’t answer the calls from Craig.”

Roberts laughs with a high-pitched cackle and a broad smile, the kind of cheeky energy that confirms working together on The Phantom of the Open was a joyous experience. Fitting, as the story behind “worst golfer in the world” Maurice Flitcroft, and his perseverance to compete in the sport despite universal lambasting, is one that should inspire this kind of joy.

“I trusted Craig,” Farnaby asserts. “We’d done so much with rehearsal and with [the] script, and Craig had storyboarded everything and knew what he was doing. I sorta let him get on with it.”

Their relationship is even more remarkable when you learn that Farnaby was barely on set. Though he portrays a character in the film, the lasting effects of COVID-19 kept his production presence limited to just that. “Unless you were absolutely needed on set,” says Farnaby, “you couldn’t come in.”

Thankfully, there’s such a thing as pre-production.

“That’s when we really collaborated and really got to work with each other. We were on the same page from the start.”

Farnaby, who co-wrote the beloved sequel Paddington 2 with Paul King, only to then team up with him again for the upcoming Wonka prequel, was already attracted to collaboration. His background is in sketch comedy, and he shared writing credits on his first screenplay, Mindhorn. Now, as the sole writer on this Mark Rylance-led comedy, his sensibility was turned toward the director.

“The dailies would get sent out to everybody,” Roberts recounts. “There was a lot of me just texting Simon, making sure he’s happy–that we were getting it right.”

Based on the laughs and smiles during yet another press interview, it looked like Farnaby was happy. Audiences will get to feel that same happiness this upcoming weekend when the film releases in New York and Los Angeles. It’s a charming, humble British entry into one of the most barren subgenres in sports movies, one that may surprise people with its level of style and craft.

In anticipation of the film’s release, Roberts and Farnaby sat down to talk about the movie’s journey to the big screen, the delight that is Sally Hawkins, and what they’ve been inspired by most recently.

The following interview has been edited for length and clarity.

Larry: Simon, this is a very unique story because I understand you wrote a script, then it became a biography, and then it eventually became a film again after that. Can you talk to me a little bit about that adaptation process and, especially given that there are some fantastical sequences in this film, what were the key changes in adapting between those different mediums?

Simon: The film has had a sort of “Flitcroftian” journey, if you like. [laughs] It’s sort of an embodiment of Flitcroft himself. I wrote a really terrible screenplay first–

Simon: –when really I had no right to, I didn’t know how to write screenplays. Then I thought, ‘okay, I better do some research.’ I teamed up with a journalist and we did proper research for a book and it turns out that is a really good way to get to know your subjects. [laughs] We discovered so much. We got Maurice’s unpublished autobiography [that] had 500 pages of every thought and feeling he had through the whole story, which was a gold mine. I’d also written Mindhorn and Paddington 2 by this point, so I went, ‘okay. I can now write a good script.’ It was really about curating these moments in his life. We always struggled with things–like the ending. It’s a sports movie about a guy who’s bad at sports and stays bad at sports, so it doesn’t have a very normal sports movie nature. [laughs] I think we found a really good ending.

The fantasy sequences–I think they had to be there cause he’s a dreamer, right? He spends a lot of time in his mind, imagining himself, so I really felt that would be great to have. I love things like The Big Lebowski, they have sort of dream sequences there. There’s a film called Billy Liar, that has dream sequences where you go into his imagination. Craig just loved those and was on board with those. We wanted to lift it out of the Kitchen Sink-y British thing and Craig was on board with that.

Craig: I love that part of it. It felt important to escape with him when he was having these moments. What’s interesting is that sometimes you’ve got to hope that it’s not going to take people out of it, that you have permission to go surreal. So like, at the beginning we have a globe within the camera and stuff like that, and [hopefully] that would set up that we will go other places for this.

Larry: Craig, this film has you reuniting with Sally Hawkins after you previously directed her in Eternal Beauty. How did you approach her about this project and what do you love about working with her?

Craig: She knows both myself and Simon, we’re close to her and we’ve both worked with her before. She’s the best really, I love everything about working with her and learn something new all the time. She keeps you on your toes and every time you get something different. I’d go as far as saying she works harder than anyone I’ve seen work. When she’s on set, you can’t get her off it. She absolutely loves being there. You know, she’s the heart of the movie really, she’s the support system. Sally’s just done a fantastic job.

Larry: Gentlemen, one last quick question for you: I’m always curious to know what is inspiring artists who are putting out films today. Is there a film or a TV show that you’ve seen recently that has really inspired you or really opened your eyes?

Larry: Then a recommendation, perhaps?

Craig: Is it going to be one of your own TV shows?

Simon: I’ve suddenly had a block on it–[the show] where 1% of the population disappear, you know this one? I absolutely love it and I keep recommending it, but because I’m on the spot it’s gone. Oh, my brain. Uh, what’s it called?

Larry: We’ll have to have our research team–

Simon: Not many people have seen The Leftovers. Completely bizarre, surreal, but brilliant. It’s fantastic.

Craig: The Kanye doc as well, [jeen-yuhs: A Kanye Trilogy] was inspiring.

Larry: Oh, very nice. See, a multi-faceted palette. We got some TV, we got some documentaries. Simon, I appreciate you finding that name on the spot for me!

Simon: I’m so happy you have that. [laughs]

Larry: It was such a pleasure to get to speak with you. The film is a beautiful story and so fun and so charming, so thank you both for your work.

Simon: Really glad you enjoyed it, thanks man.

Craig: Thank you so much for your time. Really appreciate it, Larry.

The Phantom of the Open, a Sony Pictures Classic release, will open in New York and Los Angeles on Friday, June 3rd, with a wide release soon to follow.