BILLY PILGRIM LIVES – FROM TIME TO TIME TO TIME… Past, present and future collide in darkly satirical fashion in Slaughterhouse-Five! Based on Kurt Vonnegut’s classic 1969 novel, this tale of time travel and alien abduction emerged as part of a wave of more cerebral science-fiction films in the late 60s to early 70s, elevating the genre beyond the B-movie fare of previous decades. Upstate New York, 1968. Mild-mannered Billy Pilgrim (Michael Sacks, The Sugarland Express) finds himself “unstuck in time”. Traveling back and forth across the entire span of his existence, he experiences key events of his life in a random order, including his formative years, the firebombing of Dresden and finally, at some undefined point in the future, his surreal adventures on a distant planet. Praised by Vonnegut himself for its fidelity to his novel, Slaughterhouse-Five boasts assured direction by George Roy Hill (Butch Cassidy and the Sundance Kid) and a memorable score by renowned concert pianist Glenn Gould. Now exclusively restored in 4K, Slaughterhouse-Five shines like never before, reinforcing its timeless appeal.

For in-depth analysis of Slaughterhouse-Five, please check out my appearance on the Film At Fifty podcast here.

For more thoughts on Slaughterhouse-Five, please check out our discussion on The Video Attic:

Slaughterhouse-Five comes to Blu-Ray courtesy of Arrow Video in its original 1.85:1 sourced from an excellent 4K restoration of the original 35mm negative. The only word to describe this presentation is stunning. The new transfer shows off a great amount of depth and enhanced detail in all of the various settings and time periods. There are certain elements like close-up shots of decaying feet that look quite striking in their clarity. Black levels are very deep with no trace of black crush or compression artifacts. The contrast is well defined, and there is virtually no print damage to be found outside a few stray nicks. The striking photography which captures the dreamy quality of this odyssey sparkles in high definition with natural grain intact and nicely resolved. There are moments that become a bit more coarse than others, but it is never unnatural or unsightly. There is a fantastic amount of detail present with nice textures on the clothing and production design. Arrow Video has done a miraculous job with this transfer in a way that should make anyone who decides to pick this release up extremely happy.

This Blu-Ray comes with an LPCM 1.0 audio track that sounds perfectly clear without sound effects or the music trouncing on important information. The film employs some impressive sound design when it comes to the transitions through time which is given the appropriate consideration within the mix. The film is as much of an environmental affair as it is dialogue-driven with everything balanced just so in the mix. The score and musical cues come through nicely in relation to the competing sounds which helps establish a unique tonal atmosphere. This presentation presents everything accurately with pleasing fidelity and without damage or other unwanted issues. There are optional English subtitles provided on this release. 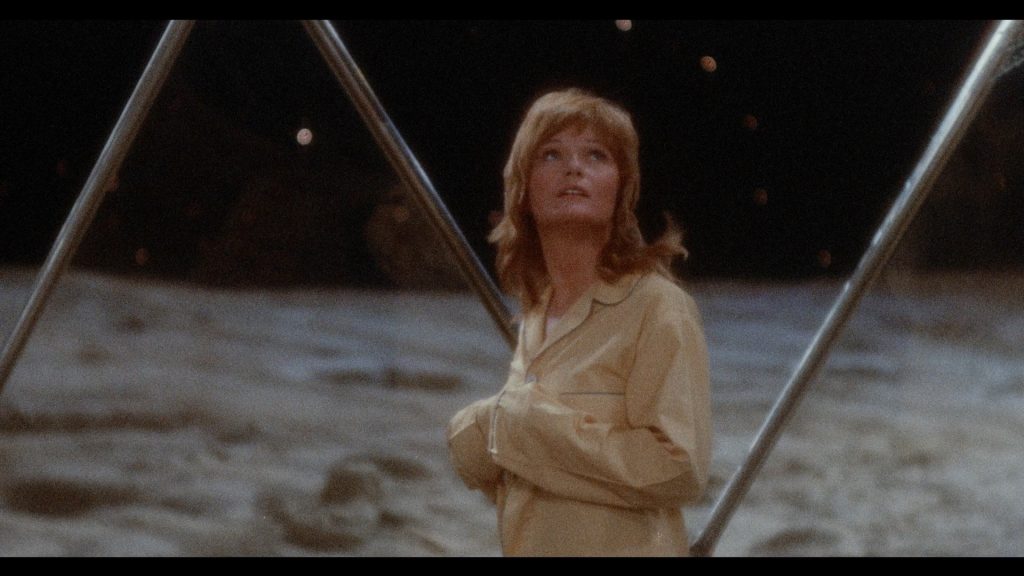 Slaughterhouse-Five feels like a bit of a strange choice for director George Roy Hill after really hitting the big time with his previous effort. Nevertheless, you have to appreciate when creatives take major swings in their work, even when it does not entirely work out. The film is a truly disorienting experience the first time through, which captures the spirit of the novel. The more you get in-tune with the story, the more it seems to reward with material ripe for friendly debate. The performances are mostly very strong across the board, and the creative elements come together quite nicely overall. Arrow Video has released a Blu-Ray featuring a stellar A/V presentation and a great assortment of special features. For as tricky as the novel is, this adaptation should be appreciated for all that it does so well. Recommended

Slaughterhouse-Five is currently available to purchase on Blu-Ray.