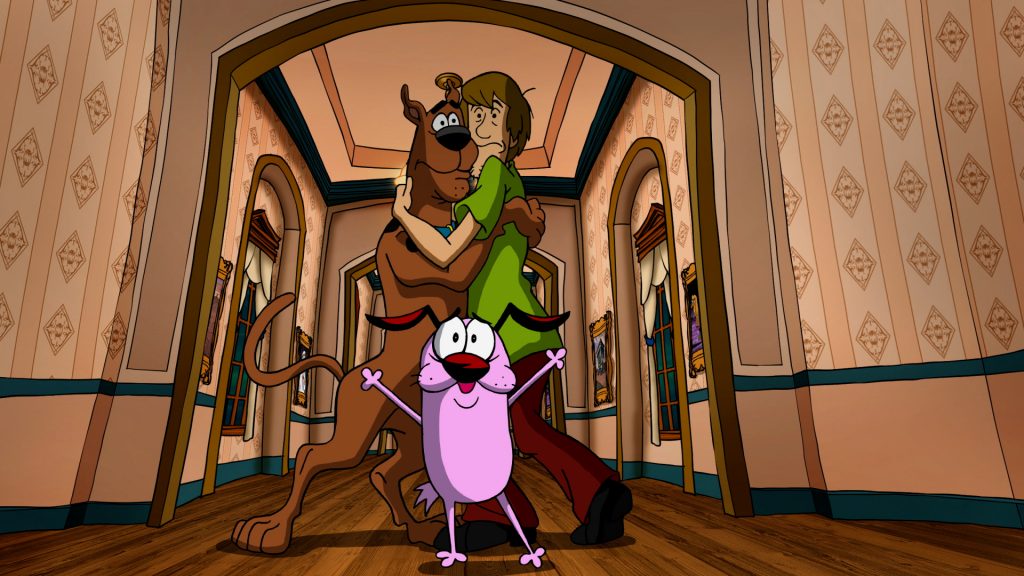 Few heroes get into as many wily predicaments as Scooby-Doo and the gang. With numerous television series and over thirty direct-to-video films over the last fifty-plus years, you can scarcely think of a situation that our lovable scaredy pup and his family in the Mystery Machine have not conquered. Zombies, vampires, Gene Simmons –  the group has seen everything and met seemingly every oddball character. So who can our frightened friend meet that would get audiences excited? An arguably even bigger nervous nellie: Courage the Cowardly Dog. It has been nearly twenty years since this delightfully off-kilter series of the same name wrapped up, but those who grew up with it still remember his horror-tinged comedic adventures vividly. Thankfully the new feature-length animated film Straight Outta Nowhere: Scooby-Doo Meets Courage the Cowardly Dog brings these iconic canines together. These two worlds felt like they were destined to meet at some point, and the only objection we have is that it took so long to happen!

The new film begins with a familiar situation to even the most casual Scooby-Doo! fan. Fred, Velma, Daphne, Shaggy and Scooby have captured a demented clown who has been dipping into funds at a local bank, and the time has finally come to unmask the culprit. Contrary to their normal state of being, Shaggy and Scooby are not on the verge of a nervous breakdown from fear. With the help of a new app (“Being Afraid Is For Chickens”), the boys are working towards eliminating fear from their life – a worthy endeavor that will surely be short lived. While his human counterparts wrap up the case, Scooby hears a high-frequency sound that puts him into a trance and causes him to run off towards the nearby town of Nowhere, Kansas. When the gang catch up with Scoob, they find themselves outside the home of Courage, who similarly was put into a trance. Things have always been a little different in Nowhere, but when all parties come face-to-face with giant cicada monsters, no one is quite prepared for what’s in store. 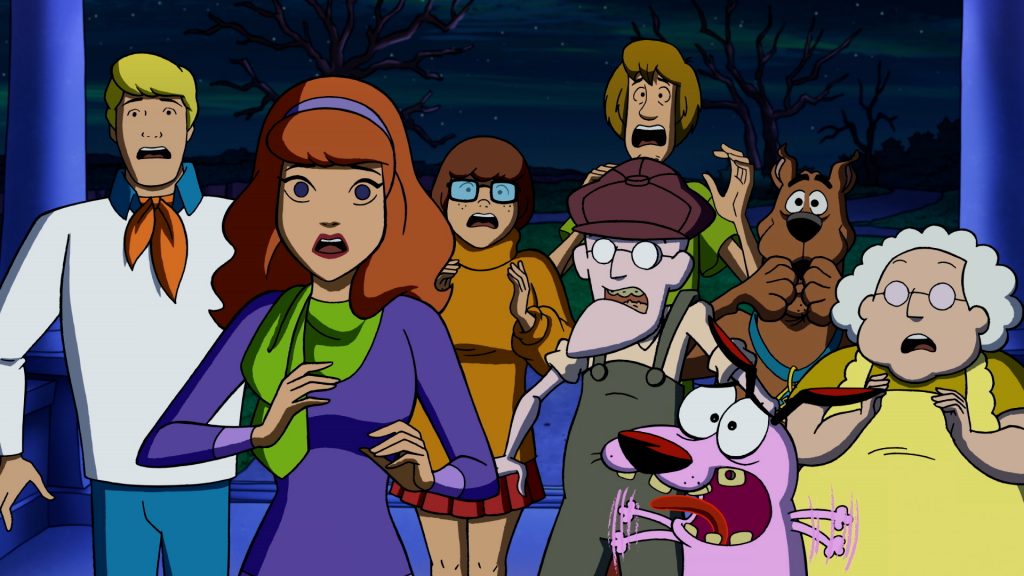 While audiences get to spend time with Scooby-Doo fairly often, the real treat of this film is catching up with Courage and his owners, Eustace and Muriel Bagge. The Mystery Machine gang blend seamlessly into the more paranormal-leaning Nowhere. The easy-going, occasionally flighty Muriel is all too happy to welcome a group of youngsters into their home. Scooby finds he has a lot in common with Courage from a love of Muriel’s fresh cookies to his penchant for getting thrust into bizarre situations. Eustace is in rare form as he now gets to pull out masks and scare TWO dogs at once, along with a trembling Shaggy. The plot itself is fairly straightforward as everyone tries to figure out the mystery behind the cicada monsters while also being invited to meet the mayor of Nowhere (who no one has ever heard of nor remembers electing). The normal formula of increasingly bizarre encounters happens like any Scooby adventure, but the Nowhere setting gives it a fun, supernatural twist.

Straight Outta Nowhere offers a good amount of thrills to go along with the comedic moments. An early chase scene involving the Mystery Machine and Eustace’s truck is appropriately chaotic, and it is topped off with the perfect comedic bow due to each owner’s love for their vehicle. The standout comedic sequence involves our heroes in an exterminator disguise which almost feels like something that would be in a classic Steve Martin comedy. At a brief 78 minutes, the film goes by fairly quickly but still feels stretched out a bit too much for the particular story they are telling. The film loses steam as it approaches the end, and a late-period scene of Eustace rapping provides one of the film’s only true missteps. Those who are more of fan of the Scooby gang may feel that those human characters are not showcased properly, but each has at least one moment where they get to make their mark. Even if it is not perfect, it is a lot of fun bringing these two franchises together.

The vocal performances are very strong all around. Matthew Lillard has always been our preferred Shaggy in the modern era, and Frank Welker effortlessly does double duty as both Scooby-Doo and Fred. Kate Micucci inhabits the personality of Velma perfectly, and Grey Griffin proves why she is one of the best in the business as Daphne. It is a treat to hear Marty Grabstein return as the voice of Courage, and Jeff Bergman takes to the role of Eustace quite well following the deaths of Lionel Wilson in 2003 and Arthur Anderson in 2016. With the unfortunate recent passing of Thea White, who voices Muriel, this film serves as a worthy send off for a talented vocal performer. This is one of the stronger original Scooby-Doo films to come out in some time. Fans of either property should find a lot to enjoy here. 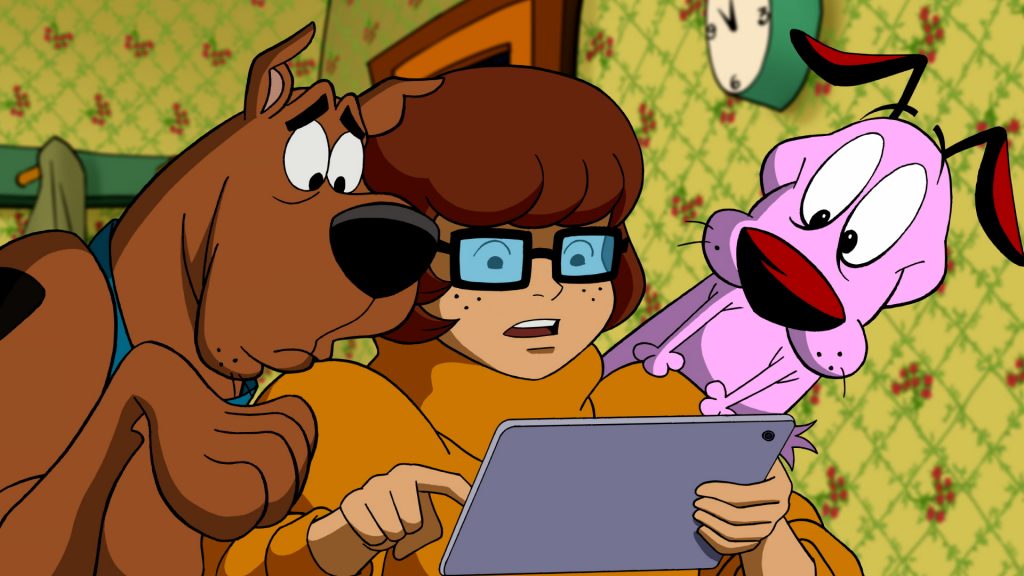 Straight Outta Nowhere: Scooby-Doo Meets Courage the Cowardly Dog comes to DVD with a 480p transfer that looks very good despite the lack of a HD option. This disc lacks the definition that a Blu-Ray would provide, but it does avoid an abundance of digital anomalies such as artifacting and digital noise. The film features a lively color palette throughout most of the runtime, but it lacks a visual pop off the screen due to format limitations. The disc provides fairly deep black levels for a clean viewing experience mostly free of crush. The animation style of the film is quite gorgeous, and line detail remains appropriately strong throughout with only occasional instances of blurring along edges. The DVD presentation is an enjoyable experience, but I would have loved to have seen this one on Blu-Ray.

This release boasts a Dolby Digital 5.1 track that more than gets the job done where it needs to. The track engages all of the channels with panning effects and sounds of destruction that really make you feel like you are in the thick of the action. There is a good amount of activity in the low-end which brings the chaos of monster attacks to life in a fun way. Dialogue is consistently crystal clear with no issues of clipping during more active moments. This usually stays in the center channel, but there are some fun moments where characters are calling from off screen that are rendered well. Warner Bros. has done a pretty excellent job with this audio track. There are optional subtitles including English SDH and French included on the disc for those who desire them.

Straight Outta Nowhere: Scooby-Doo Meets Courage the Cowardly Dog brings together two of the most beloved canines in the animation world for a very fun, lightly spooky adventure. There are moments that feel a bit padded to justify a feature-length effort, but it is easy to give them a pass as you enjoy spending time with these characters. Warner Bros. Home Entertainment has released a DVD featuring a strong A/V presentation (for the format) and a couple of classic episodes to round out the package. We will only put forth another plea to start releasing these direct-to-video efforts on Blu-Ray, and get the complete run of Courage The Cowardly Dog out on that format while you are at it. Recommended

Straight Outta Nowhere: Scooby-Doo Meets Courage the Cowardly Dog will be available to purchase on DVD and Digital on September 14, 2021.