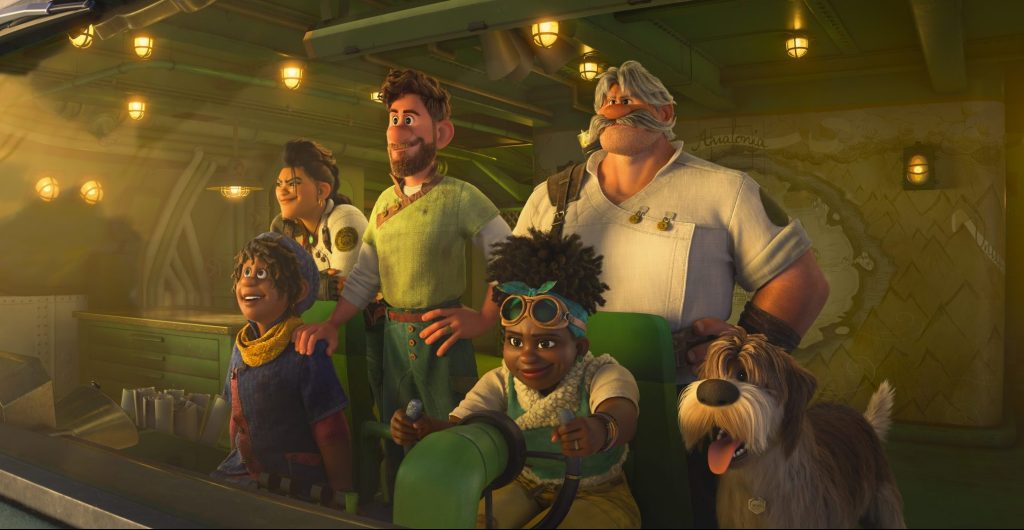 At first you wonder why there is so little fanfare surrounding the release of Strange World, Disney Animation’s latest in-house animated effort. It’s upon watching the film that you realize Strange World has very little fanfare for itself. Many things make it a very different film for the House of Mouse, predominantly that it trades the traditional, normative whimsy of Disney’s fantasy oeuvre in favor of a more pulpy, honest, and progressive story about generational trauma and environmentalism.

Like most inherited problems, the telltale signs appear early. The film’s introduction frames the entire story as an installment of “The Clades,” a pulp adventure magazine centered on a father-son duo of explorers. They even have their own theme song (a jaunty earworm courtesy of composer Henry Jackman, whose score in this is effortlessly Williams-esque). Jaeger Clade (Denis Quaid doing his best Harrison Ford) is a man’s man, first to thrust himself into thrill-seeking danger. Searcher Clade (Jake Gyllenhaal) is the brains, quieter but insightful.

In this week’s edition of the story, Jaeger and Searcher, along with their team, are attempting to scale the mountains surrounding their hometown of Avalonia, a safe haven protected by these unscalable peaks. Searcher discovers a plant infused with energy that could help power their town. He insists it should be studied, but Jaeger is dead set on reaching the opposite side of the mountains. After a heated argument unearthing deep-seated differences between the two, Jaeger abandons the group and is thought to be lost to the elements.

Cut to many years later, where Searcher Clade has brought Avalonia into an era of sustainable, plant-based energy. Searcher, now married to Meridian (Gabrielle Union), is attempting to raise his son, Ethan (Jaboukie Young-White), in the opposite vein of how his father raised him. He thinks the answer is a safe existence tending the fields, but Ethan is beginning to long for more than the farm life. When Callisto (Lucy Liu), a member of the Clade’s old expedition team and now president of Avalonia, insists that the source of their energy is withering, the entire family is brought along on an expedition to the source, a marvelous, technicolor world of imaginative creatures. There, they rediscover Jaeger, who has been trapped there since his disappearance.

None of this has seemed to make it into the marketing of Strange World, mostly because it’s not a story wrapped around a basic conceit. Combining the science fiction appeal of Journey to the Center of the Earth with the rough-and-tumble spirit of Indiana Jones, it’s channeling a kind of escapism far more interested in edges. You won’t find any “bippity, boppity, boo” here, which admittedly is part of the beloved “Disney magic.” However, what Strange World lacks in grandiosity is made up for in granular specificity. It’s less about the “Strange” world and more about the real world.

Co-directors Don Hall and Qui Nguyen (who also serves as writer) are both fathers and have been open about this film being about the world their children will inherit. Beyond the film’s environmental themes, a large part of that comes from parenthood. Jaeger and Searcher are both fathers struggling to connect with their children because of their own selfishness. Searcher, particularly, is forced to reckon with the fact that overcorrecting his own trauma does not immediately translate into being a good father.

These are not simple subjects and, rather than flatly characterize them, Strange World dares to display the messiness of it all in earnest fashion. Perhaps it lacks the tact of the deeply metaphorical Disney Renaissance classics, but it’s admirable that a film with progressive ideals is so on-the-nose about them that Disney can’t edit around it for international censors. The film will make waves for its queer representation (which it does skillfully), but the much larger conversation is its deconstruction of toxic masculinity in all of its forms.

It’s so direct about this, in fact, that the animation largely takes a backseat. The titular setting may be one of Disney’s most buckwild and expressionistic, but it doesn’t indulge in its weirdness. Wacky creature designs come and go, but they almost exclusively serve narrative purposes as opposed to the clever visual gags of a Pixar film. It’s all beautiful, and quite creative, but it never visually coalesces into one singular vision. However, it does reveal complexity in the third act, excavated by a twist that turns the entire story on its head.

Strange World has all the makings of a Disney hit: imaginative action, lovable characters, and lots of laughs–it even has the classic Disney lampshading (at one point, a character looks at the film’s cute sidekick and says “I want to merchandise it…”). It doesn’t hit quite the same way, but it hits in a different, more meaningful way. As much as films like Frozen or Encanto capture the world with wider eyes, Strange World feels more resonant because it’s looking straight ahead. It wants to make sure we learn from our past mistakes, daring to say the quiet parts out loud, even if it makes a few of its own mistakes along the way.

Strange World will debut exclusively in theaters on November 23, 2022 courtesy of Disney.

Though it lacks the metaphorical tact of Disney classics, “Strange World” is still a fun adventure thanks to its honest, messy family dynamics and vividly imaginative animation.