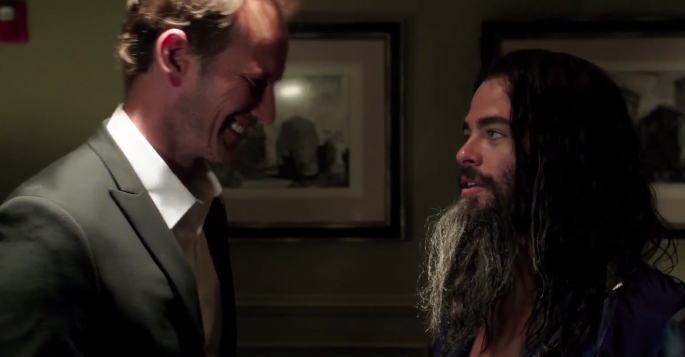 Director Joe Carnahan knows how to skillfully play with tone from the controlled seriousness of films such as Narc and The Grey to the gleeful lunacy of works such as Smokin’ Aces and The A-Team. He is the type of director who may not always stick the landing, but you always want to follow to see what he is going to come up with next. This is what made the unexpected theatrical scrapping of his 2014 comedy crime film Stretch from Universal such a disappointment for his fans. Smokin’ Aces is a very polarizing film, but its brand of over-the-top craziness personally worked for this reviewer – granted it has been nearly 15 years since I have last seen it. Stretch seemed like the film of his that would come closest to capturing the same spirit, and the fact that it was pulled from the theatrical calendar only to be unceremoniously dumped on VOD feels baffling. This pitch black comedy is a supremely entertaining time that finds Carnahan reuniting with some of his old favorite performers while bringing some fun new talent into his wild world.

We first meet Kevin “Stretch” Brzyzowski (Patrick Wilson, Aquaman) as he is being launched out of his car after being T-boned by Candance (Brooklyn Decker). This is not an epic death scene that we will spend the rest of the film leading up to. Stretch is surprisingly fine, as his narration tells us; we are just getting a glimpse of the dramatic “meet-cute” between these two. More than just starting this film off with a bang, this opening is key to establishing the heightened reality this film is going to occupy for the remainder of the film. Stretch is a struggling actor in Los Angeles who has cleaned up his hard-partying, gambling-addict ways in the year he has been with Candance. He is just about to propose to her when she breaks up with him at the worst (or best? – you be the judge) time after she falls in love with someone much more famous. The only thing he has going for him is his job as a limo driver; that, and a $6,000 gambling debt from his past that has unexpectedly been demanded to be paid in full by midnight. Stretch is going to have to go above and beyond in the course of his duties to get a tip big enough to get him out of hot water. 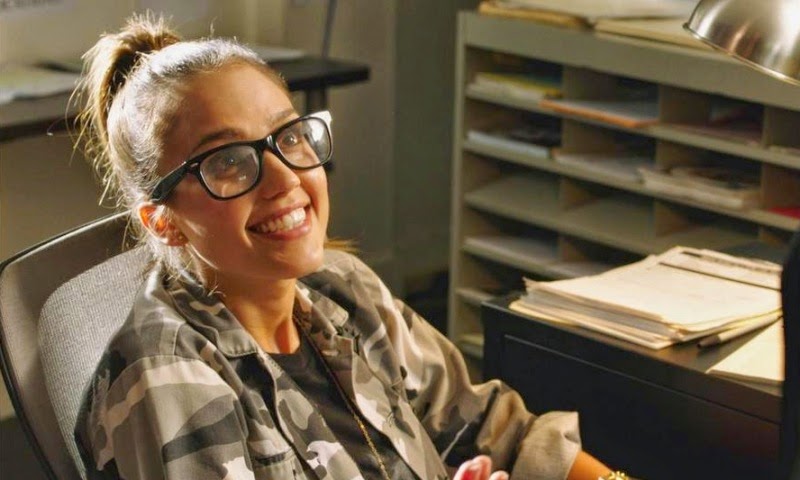 Stretch has a colorful array of personalities joining him for his day of madness. His boss Nasseem (Shaun Toub) informs Stretch that their top competitor, a mysterious figure known only as The Jovi (Randy Couture), has been stealing their clients and they will need to do the same to him if they want to stay afloat. Though, this will put him in the crosshairs of The Jovi’s Hulk-like tow-truck driving brother Boris (Matt Willig). Aiding him in his efforts to poach clients such as a wonderfully self-aware David Hasselhoff is the charming receptionist at the limo company, Charlie (Jessica Alba). Every hero needs a right-hand man, but Stretch wishes his was not Karl (Ed Helms), a manifested hallucination of a former limo driver who took his own life and pops up to comment on what a poor job Stretch is doing with his life. The performance of the film might go to Chris Pine, who plays an eccentric millionaire who might be the key to getting Stretch out of his financial jam if he can survive the night of depravity and the FBI manhunt that is being planned for the unhinged figure, led by a man named Laurent (James Badge Dale).

Stretch is unabashedly over the top as it simultaneously offers commentary on the lengths people will go to in order to make it in Hollywood as well simply providing a showcase for these performers to engage in increasingly more outrageous situations. You can feel the fun radiating off the screen as these performers gamely tackle everything that is thrown at them. Patrick Wilson has been mostly a figure either in the horror scene or as a supporting player in bigger franchises as of late, but his charisma as a leading player in this story provides a strong argument for why Hollywood should be utilizing him more skillfully. Some of the situations that arise in this movie can verge a bit too much into the puerile side of the spectrum, but overall the film provides a solid mixture of laughs and excitement as you wonder how Stretch is going to get out of his insane predicament. This is not going to be a movie for everyone, but if you are a person that loves dark humor and actors leaning into big performances, this is the movie for you. 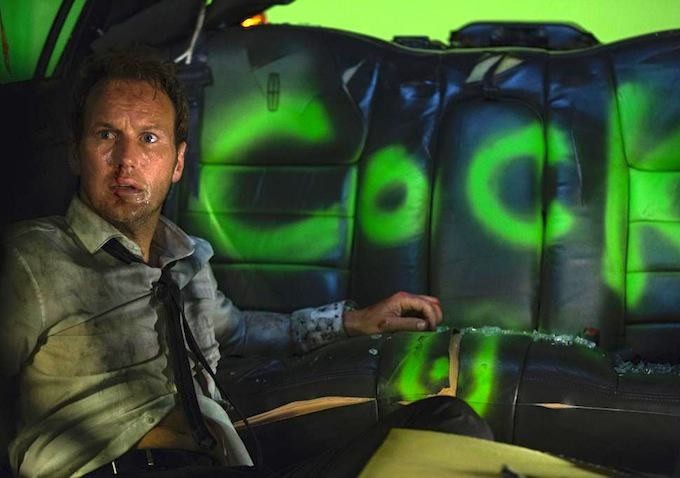 Stretch makes its Blu-Ray debut with a 1080p transfer that is quite striking and represents a top tier presentation from Kino Classics. While I have no specific details about the transfer, this appears to be derived from a rock solid master from Universal that shows no signs of damage or digital tinkering. For the majority of the film, the transfer looks incredibly clear and detailed with only a couple of shots exhibiting what would be labeled as noise. The image quality is completely stable with some impressive detail in the production design and texture of clothing. Colors stand out in a really pleasing manner with bright, vivid hues leaping off the screen in key scenes, such as a detour to a nightclub. Black levels are very pleasing in their depth with not much in the way of crush present. There are no compression artifacts or other digital anomalies in the transfer. Overall, I was extremely impressed by how strong the presentation was from beginning to end.

Kino Classics brings us this new Blu-Ray with a lossless DTS-HD 5.1 Master Audio mix that is a powerhouse effort. The dialogue holds up quite nicely, coming through clearly for the most part with only a few instances where lines are stepped on by the music or sound effects. The environmental effects are delineated nicely and given a dynamic placement throughout the speakers. The sounds of raucous partying along with an immense amount of car action bring nuanced life to the rear speakers. The movie features many high-energy songs which sound great within the mix. The low end is given a lot to work with from various set pieces throughout the film including at least one major explosion. This is a track that was way more dynamic than I ever expected it to be. A truly pleasing experience. 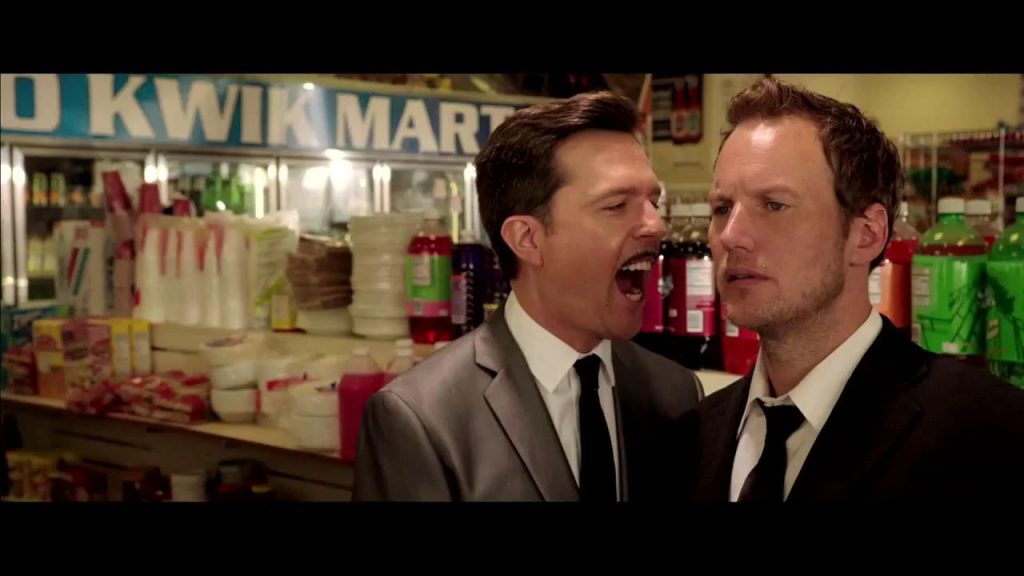 Stretch is quite the unhinged ride which you would expect from director Joe Carnahan. This is the type of film where you can feel that everyone is having fun with many people gleefully playing outlandish versions of themselves. The movie is completely insane, but if you throw out the need for believability and embrace the chaos, this might just be the hilarious thrill ride you have been craving. Patrick Wilson especially provides you with more than enough reason to devote some time to this one. Kino Classics has provided this film with a Blu-Ray that has an incredbile A/V presentation and some incisive special features. If you are a fan of the film or if it sounds like your type of crazy fun, this disc will make a great addition to any collection. Recommended

Stretch is currently available to purchase on Blu-Ray and DVD.