‘The Black Phone’ Review – A Supernatural Thriller that is Super Underwhelming

Finney, a shy but clever 13-year-old boy, is abducted by a sadistic killer and trapped in a soundproof basement where screaming is of little use. When a disconnected phone on the wall begins to ring, Finney discovers that he can hear the voices of the killer’s previous victims. And they are dead set on making sure that what happened to them doesn’t happen to Finney.

More times than none, our parents were right. Well, about most of the practical things at least. Things like, don’t touch the hot stove, look both ways before you cross the street, be nice to your sister, don’t juggle the steak knives, normal stuff. Undoubtedly, the most important one of them all, the one that is passed down from generation to generation is, don’t talk to strangers. Of course, that now extends to online as well—if only we knew that in the AOL chatroom days, weird times. Anyway, it was true pre-internet and it’s true now, listen to your parents.

“Look what you made me do.”

I always knew magicians were hiding something. Based on a short story of the same name by Joe Hill, The Black Phone is a supernatural thriller that is super underwhelming. Most of us have been looking forward to this film since 2021. The trailer sold you with its dark vintage look, horrifyingly-cool mask, and subject matter that is terrifying on its own. Set in 1978, the film takes place in the perfect time for a scare. The decade before harbored multiple serial killers that spilled over into the 70s and child abductions became a huge problem as well. So, when you add a supernatural aspect to the mix, the stage is set for an unhinged horror spectacular. The only problem is that the story is a bit too uplifting and triumphant to be scary. What initially felt like the makings of a grim and twisted tale, quickly became a transformative story of meek to merciless. A story of perseverance, inner strength, and standing up to the bully. Also, one of unmatched sibling love. Now, that’s not to say that it makes for a bad film, but that’s not what was promised. I should’ve prefaced that with, I’m not familiar with the short story, so for all I know, it could’ve unfolded the exact same way. If you’re looking for scares, they are rather minimal. However, there are plenty of thrilling “will he get caught?”, “run!”, and “fight back!” moments. The biggest issue is that the story feels incomplete. There are multiple plot points and plot devices that are introduced and would make the story darker and more interesting, but they are never fully explained or revisited. It caused some of the characters to feel one-dimensional when clearly there was more to explore. Is it all due to past trauma, you know, hurt people hurt people? Pure evil? Mental illness? Sadistic fun? Just because? I have no clue, you tell me. It leaves you with way too many unanswered questions that we’ll never get the answers to. Oh, and Ethan Hawke is vastly underutilized. Other than that, the film looks great. The production design and costume team really captured the essence of the 70s. The supernatural aspect is cool but also confusing. The kids, Mason Thames and Madeleine McGraw are terrific, and Miguel Cazarez Mora is the badass kid we all wanted to be. And the ending is rather satisfying. While I have my issues with the film, I can still see how some people will love it. Its rewatchability is medium.

The pacing of the film feels fine, initially. However, you begin to realize that it takes the film entirely too long to any kind of the point it wants to make. It takes its time setting up plot points that it never explains or bothers to return to. What popped for me and unfortunately is never explained in any way is the mask that The Grabber wears. It’s one thing for someone to be completely evil, but when you add a hellish mask and never know what they look like underneath, it’s that much more creepy.

Starring: Ethan Hawke, Mason Thames, Madeleine McGraw, Jeremy Davies, James Ransone While I may have had some beef with the film, I enjoyed the cast. Ethan Hawke, even with limited screentime, was incredibly eerie as The Grabber. From his voice, his movements, to his twisted game, Hawke needs to play more dark characters. He feels reminiscent of someone you might see in a true-crime documentary. Newcomer, Mason Thames did an amazing job as Finney. He is really able to convey inner strength and determination in a realistic and relatable way. This kind of role had to be a lot to take on and for it to be his first film, it’s very impressive. The shining star of the film is Madeleine McGraw as Gwen, the younger sister of Finney. She’s basically a solo clairvoyant Mystery Inc. but instead of yelling, jinkies, she says, fuck. She’s the light, lifeblood, and humor of the film. The Black Phone releases in theaters on June 24, 2022. Stay safe and don’t talk to strangers. 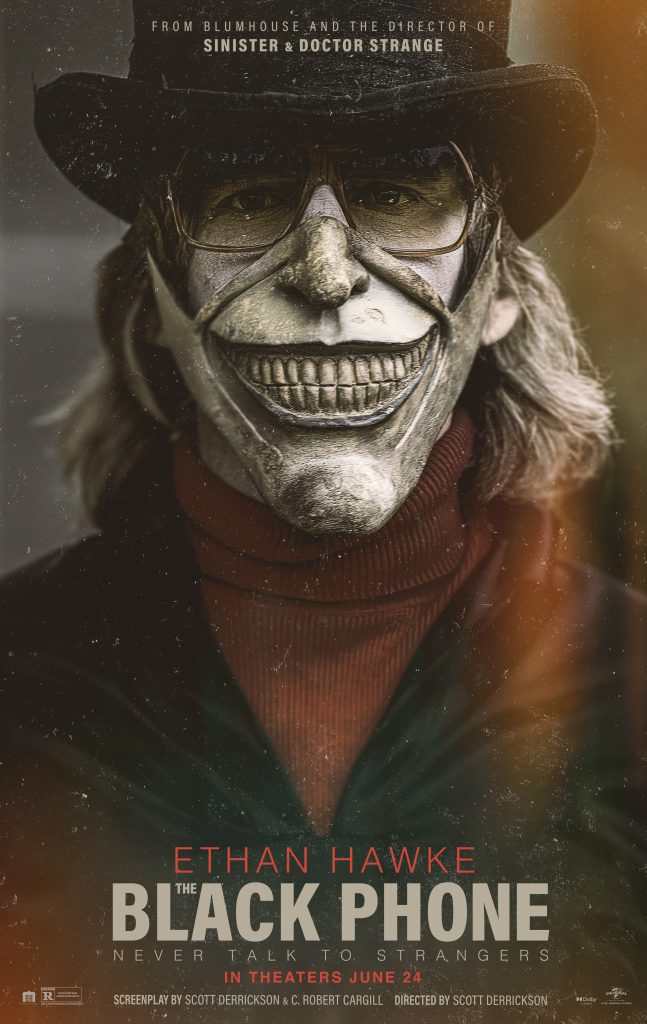 ’The Black Phone‘, is a supernatural thriller that is super underwhelming