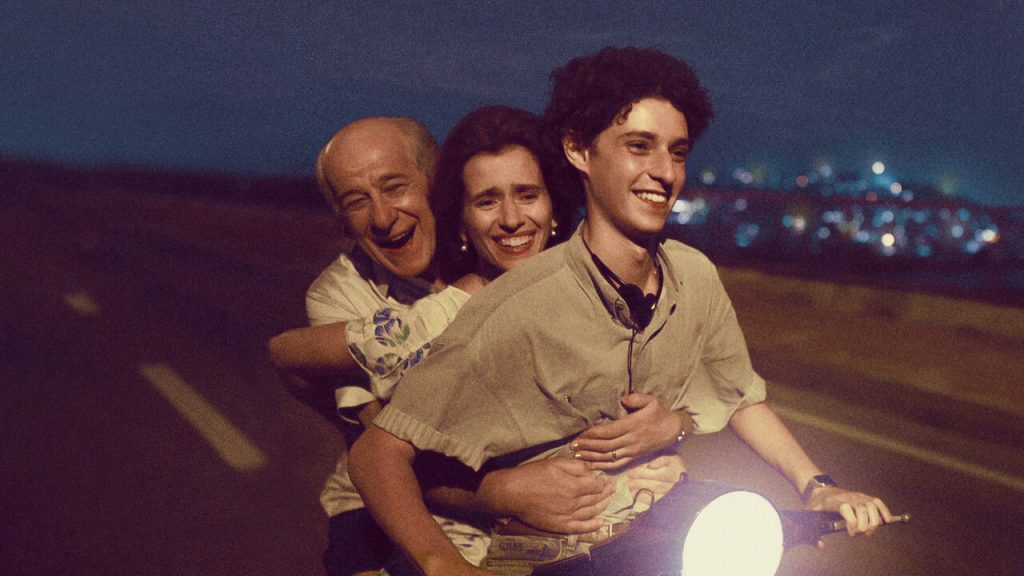 After winning big with Alfonso Cuarón’s Roma in 2018, Netflix is back in the awards race with another semi-autobiographical love letter, this time from one of Italian cinema’s most decorated modern auteurs.

Paolo Sorrentino, a previous Oscar winner for his film The Great Beauty (La Grande Bellezza) in 2013, is back with another grand exploration of the human condition, though this time on much more personal terms. For every sprawling wide shot of a gorgeous Italian vista, there is a solemn stare out into the elusive Tyrrhenian Sea. The water is such a deep, rich blue that it could only come from a memory.

The Hand of God follows Fabietto Schisa, portrayed by newcomer Filippo Scotti in a deeply insular performance, a quiet but observant teenage boy growing up in the Italian city of Naples in the 1980’s. His family consists of his father, Saverio (veteran Sorrentino collaborator Toni Servillo), his mother, Maria (Teresa Saponangelo), his brother, Marchino (Marlon Joubert), and his sister, Daniella, who is largely off-screen, not to mention his many raucous aunts, uncles, cousins, and grandparents, who all make for memorable caricatures of the traditional Italian family.

One highlight of the family is Patrizia, portrayed by the luminous Luisa Ranieri, who opens the film. She is visited by San Gennaro, Naples’ patron saint, personified here as a suave but scruffy older gentleman in a vintage luxury motorcar. After San Gennaro promises Patrizia he can help her bear a child, he takes her to see the mysterious Little Monk, an ancient creature of Italian folklore, who slips her money. After a brief sexual encounter with San Gennaro, he grants her the ability to have children.

She returns home to her husband, Franco, who sees the money and submerges into a jealous rage believing Patrizia has cheated on him. After consulting her family, nobody will believe Patrizia’s story…all except for Fabietto. From this point on, Sorrentino centers the story on Fabietto and uses him as a surrogate to explore the many characters, events, and interests that would shape the director’s upbringing.

You wouldn’t know it by the first scene alone, but Patrizia’s prologue sets the scene for the many spiritual elements following Fabietto’s journey in The Hand of God, a title that has its own spiritual double meaning. Those familiar with Italian sports culture will understand it as a reference to the iconic goal scored by prolific Argentinian soccer star Diego Maradona using his hand in the 1986 World Cup quarter final. This event proves to be seminal for Fabietto as a soccer fan in the throes of Maradona’s looming celebrity over the country, but his experience of this event ultimately saves him from an unspeakable tragedy that splits the film into two slightly uneven but still compelling parts.

The connections to both the Little Monk and Maradona further explore the role of fate in Fabietto’s life, a more figurative hand of god guiding him along as he is forced to reckon with his future. While the first half establishes the character dynamics and several key moments that define Fabietto’s life, the second half forces him to carve out his own path, which is where more of the story’s intrigue lies.

Though a two-act structure is rather unconventional in filmmaking––it feels more reminiscent of theater if anything––Sorrentino uses it to good effect here in that the midpoint is so shocking that it reverberates across the entire second half. Previously innocent relationships become something much more haunting. Fabietto and Marchino begin as two supportive brothers but begin to drift apart; Marchino wishes to dissolve into his adolescence and first love, while Fabietto aspires to become a director and escape his life in Naples. This comes to a head in a beautiful scene by a pier in Stromboli in which the two brothers embrace, knowing full well this may be the last time they see each other for the foreseeable future.

Perhaps the most effective shift in dynamic comes from Fabietto and Patrizia. What begins as a deep infatuation, colored by Fabietto’s sexual awakening, blossoms into a mutual love and admiration felt through shared trauma. In one of the film’s most tragic scenes, we see Patrizia’s face has withered, as though she hasn’t slept in years. Patrizia is no longer a symbol of sexual radiance, now haunted by her desperate longing for a child.

Upon a first viewing, it can be difficult to fully internalize all of Sorrentino’s choices. Despite its deeply personal, intimate nature, the film feels like an epic at times. With so many relationships affecting the main character, and cinematography that makes every room feel larger than life, certain scenes feel closer to The Godfather than Call Me By Your Name. But upon further reflection, it is this multi-faceted depth in Sorrentino’s intentionality that makes The Hand of God a beautiful and effective character study. Though it never fully comes to a sense of clarity on its lofty philosophies on myth, cinema, love, and loss, it is that paradoxically warm confusion that puts us right in Fabietto’s shoes.

This is only elevated by the cinematography, courtesy of Sorrentino’s collaboration with his previous camera operator-now director of photography Daria D’Antonio. The film was shot in Naples, with numerous specific locations from Sorrentino’s childhood utilized during pivotal scenes. Every location feels lived-in and understood as only Sorrentino could execute.

I must admit that I was not familiar with Paolo Sorrentino’s body of work before watching this film, nor the history of Naples in the 1980’s. While the film isn’t the most accessible to those unaware of that context, Sorrentino’s strong intentionality as a filmmaker is itself compelling from the very first shot. Viewers who stick with the film, and maybe even do a little research afterwards, will be rewarded in their deeper understanding and appreciation of one of this year’s lesser heralded Oscar nominees.