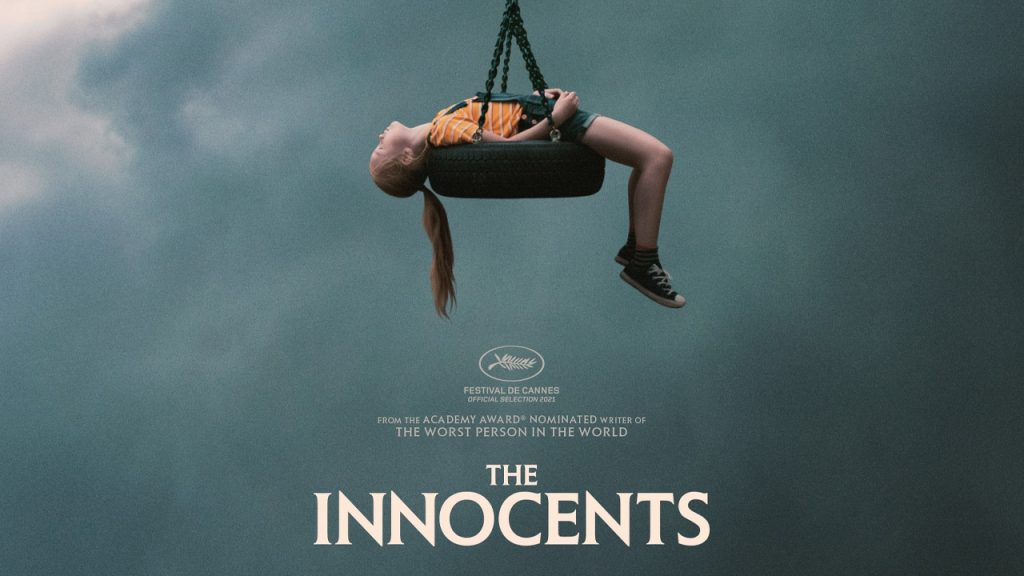 In Eskil Vogt’s Norwegian thriller The Innocents (2022), childhood is the locus of evil. Young girl Ida (Rakel Lenora Fløttum) and her family have relocated while most of the country is on summer holiday. Her primary company, and responsibility, is her autistic older sister Anna (Alva Brynsmo Ramstad). Ida resents having to help look after Anna, and jumps at every opportunity to venture away into the apartment complex and surrounding woods. It’s on one of these sojourns that she meets Ben (Sam Ashraf), who reveals he has a handful of telekinetic powers. The two connect with neighbor Aisha (Mina Yasmin Bremseth Asheim) and even bring Anna into the fold, unlocking an array of supernatural abilities across the group of kids. Yet, adding powers into the chaos that is childhood only leads to wild emotions and deadly flights of fancy.

The Innocents shuffles into the rife sub-genre of horror and adjacent works where children’s penchant for vicious behavior is blown out to comment on innocence and morality. The first scene with Ida features her, a young, white, blonde, blue-eyed child, pinching Anna as hard as possible simply to see if she will react. Her sadistic streak extends to putting glass in Anna’s shoes, and taking part in a scheme with Ben that results in dropping a cat down many flights of stairs. Vogt pulls on the playbook championed by The Omen (1976) and the same-named The Innocents (1961), which is a loose adaptation of “The Turn of the Screw.” While we may be living in the Stranger Things (2016-) inspired age of children fighting evil, The Innocents harkens back to the era when revealing the wickedness of youth was forefront of the cultural mind.

As a director, Vogt embodies the cold and calculating aesthetic so often expected of Nordic chillers. Taking cues from Let the Right One In (2008) and his own Thelma (2017), Vogt embraces a steady stream of creeping zooms and stark lighting setups to sap the joy from the proceedings. From the jump, there is little question about the twisted lengths Ida and pals will go to as they embrace more warped approaches to dealing with childhood disappointments and challenges. Vogt is helped greatly by a remarkably talented group of 12-and-younger performers. Ashraf and Fløttum are standouts, oscillating between a frightening lack of empathy and exasperating but understandable immaturity. Collectively, they effectively raise the question about whether or not it is as simple as classifying a child as evil, or if fiendish actions are more a result of underdeveloped reasoning amplified by supernatural abilities.

Yet, for all of this impressive work, The Innocents cannot escape a central miscalculation that torpedoes its successes as a result of poor decision-making; Anna. The first red flag is an autistic character played by a non-autistic actress in a performance that hews to an exaggerated vision of autism. While not as utterly vile as Sia’s Music (2021), Vogt’s writing and direction express little interest in letting Anna be more than a plot device meant to trounce around and create issues for Ida. The only diversion from this is when Anna suddenly expresses extensive supernatural abilities, but that development also plays into a harmful trope that fetishizes autism as a way to “Other” characters. As a result, Vogt’s decisions as both writer and director offer an open-armed embrace of crude representations and considerations of autism that are such a central part of the movie that the failure is inescapable.

Vogt is a masterful stylist, yet no amount of cinematic verve should distract from the fact that The Innocents fundamentally fails the characters it is theoretically conceived to explore. The glacial emotionality of the film services it well in terms of heightening terror and discomfort, but it also results in a finished piece that only amplifies the projects misguided and, frankly, archaic approach to the vision of a differently-abled main character. The full-throated critical embrace of The Innocents no doubt reflects a mainstream prepared to overlook such issues in favor of Vogt’s burgeoning auteur status, but it is a mistake to consider this film without grappling with its failings. There is much to respect and love in The Innocents, but I cannot help and walk away from it wishing Vogt and company had chosen to care more for Anna.

The Innocents releases in Select Theaters and Everywhere You Rent Movies on May 13, 2022.