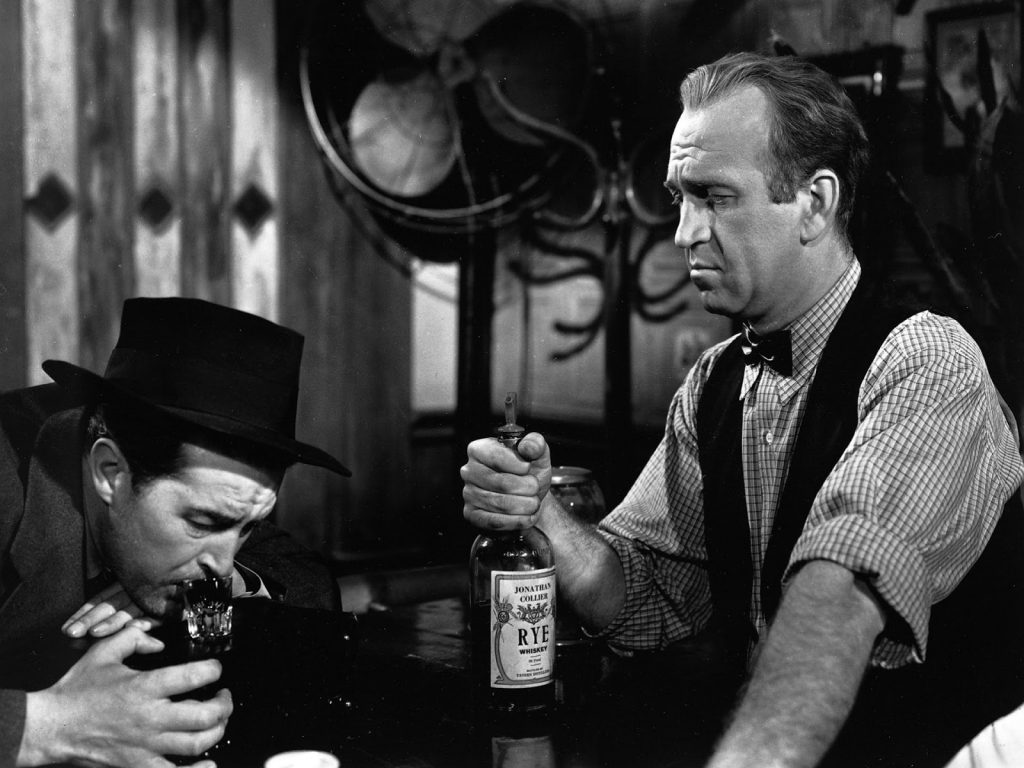 To have a feature narrative revolve around an alcoholic protagonist is nothing new, but one of the most notable depictions came from the brilliant mind of Billy Wilder in 1945. The iconic auteur had written scores of films during his fifteen-plus years in the industry at this time, but his career as a director was still relatively new. Coming off the success of Double Indemnity, the always-varied Wilder took a turn from the criminal to the deeply personal with his adaptation of the Charles R. Jackson novel The Lost Weekend. This tale of an alcoholic writer called to him after experiences with his recovering-alcoholic writing partner during the creation of Double Indemnity. Alcoholism was often played for laughs in Hollywood such as in W.C. Fields pictures and The Thin Man series, but this story tackled the disease with a grave seriousness that felt innovative. Audiences thought so too, as the film became a box office success and won Best Picture at the Academy Awards. Much of the power of the story has been lessened by time, but there is an innate honesty that remains timeless.

New York writer Don Birnam (Ray Milland, Dial M For Murder) is searching for any way to have a drink when his brother Wick (Phillip Terry, Born To Kill) comes over to prepare for a weekend vacation with his brother. Wick, along with Don’s girlfriend Helen (Jane Wyman, All That Heaven Allows), has strategically gone through Don’s apartment and attempted to locate and dispose of all of the liquor that has been hidden away. Believing they have been successful in their endeavor, Wick and Helen attend a concert together, under Don’s insistence, and leave Don alone in a liquor free apartment with not a dime to spare. What we will come to know about Don is that he is crafty and unscrupulous when it comes to indulging in his addiction. Milland brings an innate earnestness to the character which you want to protect, but this only makes the pain from his slip-ups hurt so much more. Don is not only ruining his own life, but he is making the lives of everyone around him unbearable, no matter how much they care for him. 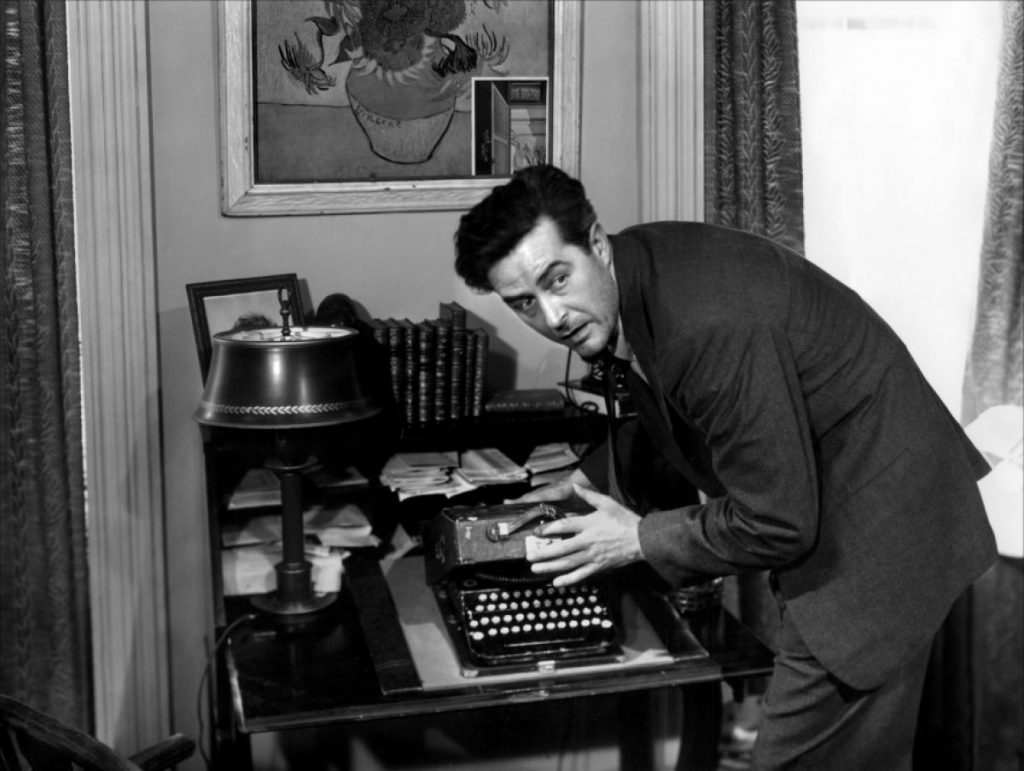 Wilder follows Don into the depths of his disease in a way that feels pretty bleak even by modern standards. We have seen this story in various ways over the years, but this feature still packs a punch. None of it would amount to much if the film did not give you something to hold onto as a reference, and flashbacks to his initial romance with Helen do the trick. Even at his most desperate, Don can still see something greater than booze when it is in front of him – at least for a little while. Wyman brings a great amount of sympathy to Helen, a person who remains committed to the man she loves even when everything is pointing to him being a lost cause. When Don attempts to put his story down as a novel, you root for him as the siren call of liquor pierces his ear like a needle. With addiction dramas, there tends to be a penchant for repetitive sequences of succumbing to the problem, but The Lost Weekend somehow keeps the narrative fresh as you see each new low from Don.

Wilder won Best Director at the Academy Awards for this film, and it is easy to see why when you sit down and take a look at the way the form is used to enhance the story. For example, there is a shot in which Don is losing track of time as he walks down the street in a drunken stupor as the world around him goes hazy. It may come as a shock, but this was not always a known technique on film, and this film helped put that aesthetic choice on the map. The way Wilder depicts alcoholism as a living nightmare is also pretty thrilling. Let’s just say that there are some hallucinations during a particular low point for Don that send a shiver up your spine. The trip to the alcoholic ward at the hospital is honestly enough for most people to think twice about taking their next drink. The Lost Weekend is a knockout character piece that clearly tackles the heartache that comes from alcoholism. Wilder would go on to make much better films, but this one stands out as a solid outing that breaks ground in ways that were quite necessary. The film may never go as dark as the novel on which it is based, but for the time period the film earns no qualms. 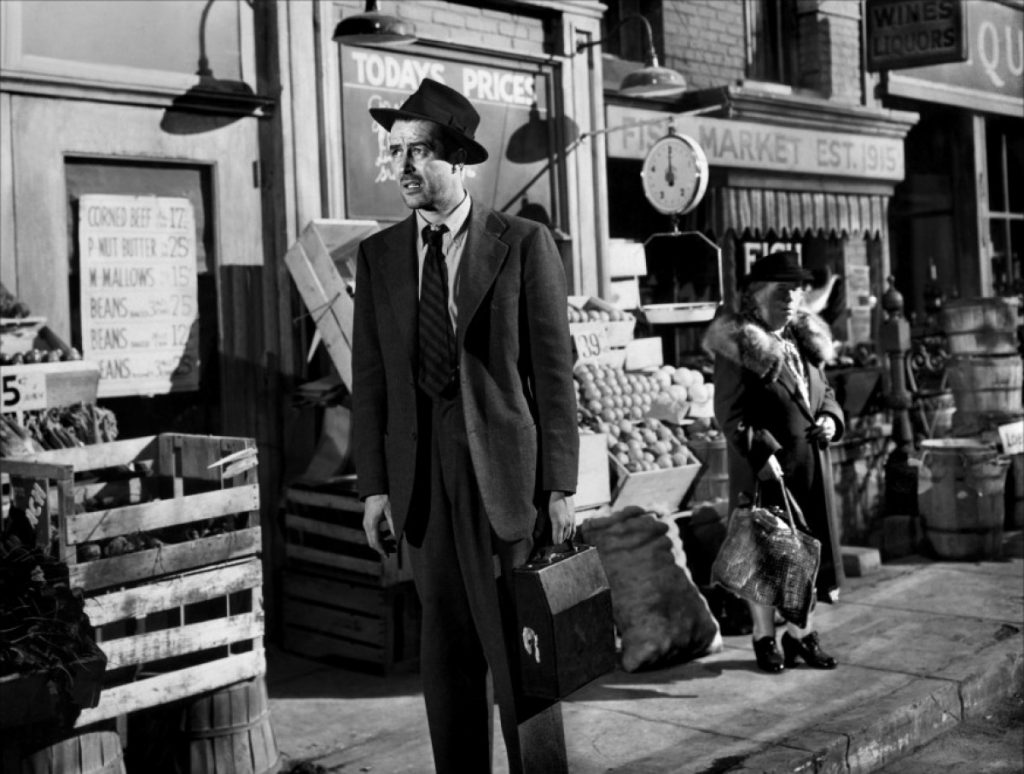 The Lost Weekend makes its domestic Blu-Ray debut thanks to Kino Classics with a brand new 1080p master from a 4K scan. For a film that is over 75 years old, this is a truly spectacular presentation. The gorgeous black-and-white photography shot by John F. Seitz shines in high definition with natural grain intact. There is a pleasing amount of detail present with nice textures on the clothing and within the production design of the apartment and drinking establishments. The new transfer shows off a great amount of depth and enhanced detail within the film’s composition. Black levels are very deep with no overwhelming occurrence of black crush or compression artifacts. The contrast is well defined, and the track only experiences a very minor amount of flicker and specks of damage to the print. Kino Classics has done some marvelous work here with the provided master from Universal.

The Blu-Ray comes with a solid DTS-HD 2.0 Master Audio track that serves this movie well given the quality of the source material. Dialogue and background noises are represented in perfect harmony with all competing elements. This track does present with a minor amount of age-related wear and tear, but the main issue is that overall the track sounds a bit thin. The music from Miklós Rózsa never overpowers the dialogue or other important information. There are a few moments where the music is in danger of being clipped ever so slightly. There are optional English (SDH) subtitles included for the feature film. The good folks at Kino Classics have done their best to prove the most stable track possible for this one. 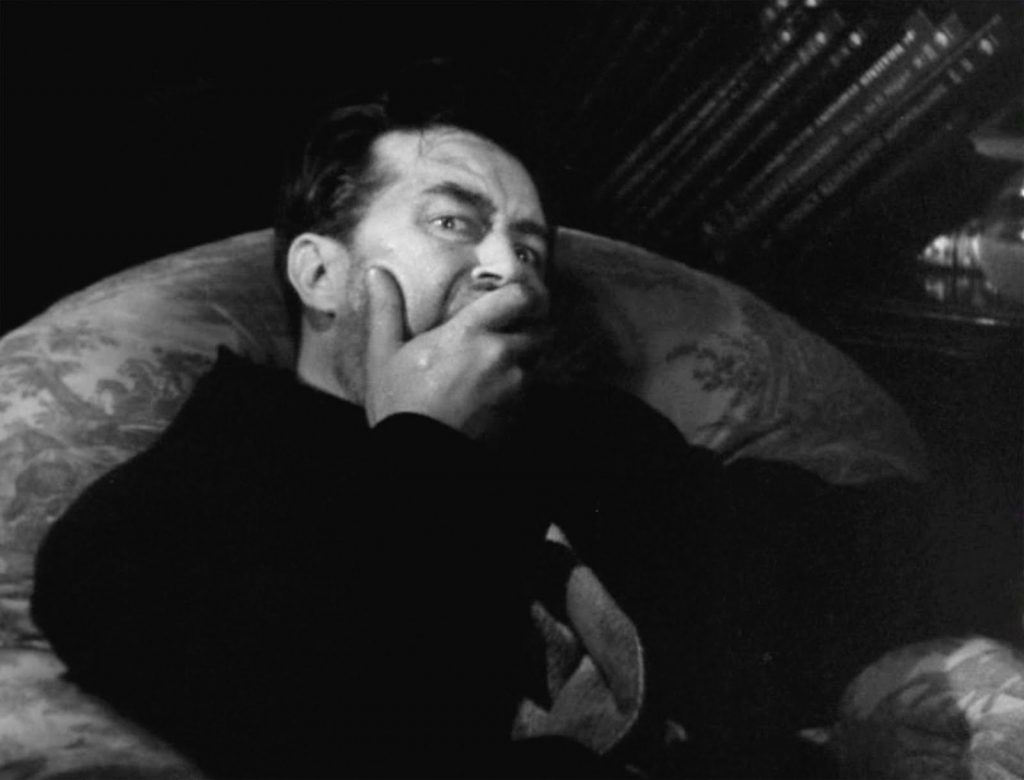 The Lost Weekend is a pretty impactful and unsparing tale of the dangers that arise with alcoholism. The movie is not the absolute pinnacle of the career of Billy Wilder, but with a legacy filled with so many classics that is not necessarily a knock against the film. Ray Milland toes the line between sympathetic and detestable that allows the audience to remain invested in the outcome. Kino Classics has released a glorious Blu-Ray that features a pretty wonderful A/V presentation and some interesting special features. If you are a fan of classic films, you probably already have this on your watchlist by virtue of the fact that it won Best Picture. This disc will make your viewing experience even better, though. Recommended

The Lost Weekend is currently available to purchase on Blu-Ray.