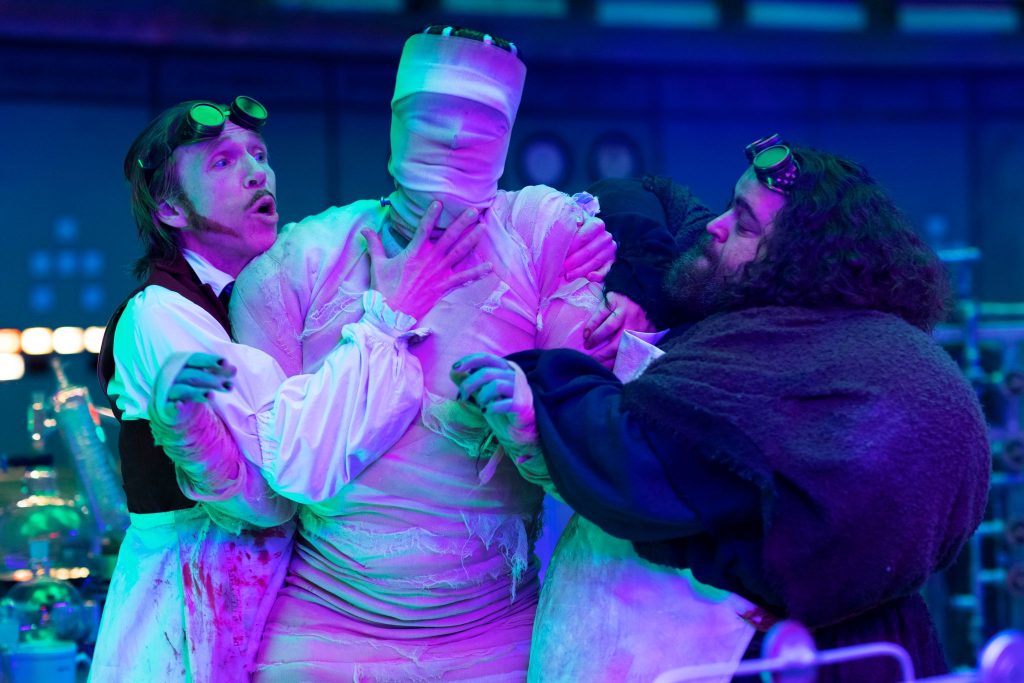 Plot Summary: From writer/director Rob Zombie comes the strangest love story ever told. Lily is just your typical 150-year-old, love lorn vampire looking for the man of her nightmares . . . that is until she lays eyes on Herman, a seven-foot-tall, green experiment with a heart of gold. It’s love at first shock as these two ghouls fall fangs over feet in this crazy Transylvanian romance. Unfortunately, it’s not all smooth sailing in the cemetery as Lily’s father The Count has other plans for his beloved daughter’s future, and they don’t involve her bumbling beau, Herman. You’ll laugh, you’ll cry, you’ll howl at the moon as The Munster’s make their way to Mockingbird Lane!

By now, as I clack away on the keys, I am surrounded by the Halloween lights and decoration to fully get into the spooky season. It’s in this very apt environment that I screened The Munsters from Rob Zombie. Despite the hate over the trailer, I was damned excited, and I hoped that Zombie would not let me down. Thankfully, for the most part, I was really pleased with this movie. Clearly, Zombie is a diehard fan of The Munsters, and the show occupies a very special place in the rocker’s black heart. The end result is a movie that can be a fun entry point into the series, while also offering up deep cuts for fans like myself. For spoiler’s sake, I won’t mention them, but to say, if you are very familiar with the show, you will have a blast spotting the easter eggs. Since this is produced by Universal Studios, we also get a lot of clips and nods to classic movie monsters.

Even if other critics don’t connect with this movie, I truly hope that they can at least mention just what a marvel this production is. Visually, Munsters plays out like an incredibly cool ‘60s dreamscape with bombastic camera movements, wonderfully moody lighting and a production design that is jaw-dropping in its execution. The end result is an E.C. horror comic stitched together with a campy Gothic aesthetic. I cannot stress just how wonderful this movie looks, and I want to live in this surreal and haunting Halloween dreamland.

The cast also does a great job, and yes, Sheri Moon Zombie is a sheer delight as the undead beauty Lily Munster. Sheri Moon brings a lot of fang-tastic energy, and you can’t help but be completely under her velvet spell throughout. Jeff Daniel Phillips is tasked with bringing the iconic Herman Munster to shocking life, and I am very happy to say he does a brilliant job. Phillips totally understands the charm and endearing quality of Herman, who is basically a big child. His Dad jokes are ripped straight out of the show, so the corniness is intentional. Phillips also makes the character his own by adding little touches that feel like it’s not just a carbon copy. After all, Fred Gwynne left some very big boots to fill.

Daniel Roebuck plays the grumpy Count aka Grandpa Munster (who isn’t a grandfather just yet here) and, like Moon and Phillips, is an utter joy to watch. Like his co-stars, Roebuck isn’t trying to do an impression of the original actor’s work (in this case Al Lewis) but rather boiling down the essence of the character and re-contextualizing it. Richard Brake (31, Doom) delightfully hams it up as a mad scientist, and you can tell he, and everyone else are having a “damned” good time. It’s also fun having cameos from Butch Patrick and Pat Priest, who are the only remaining cast members of the original series.

The movie is not without flaws, and yeah, I think the biggest is pacing. The movie is nearly two-hours long, and I think it could have trimmed a good twenty or thirty minutes. It just felt like an overly long episode with low stakes (not of the wooden variety) injected with a monster-punk flare. So, I cannot really be mad at that. At the end of the day, I found myself really enjoying this movie, and it captures the source material in a way that only a “died” in the wool fan like Zombie could. The Munsters is a groovy, ghoulish good time!

The Munsters is currently available to purchase on Blu-Ray, DVD and Digital courtesy of Universal Pictures Home Entertainment.

The Munsters is a groovy, ghoulish good time!