There’s no rivalry in sports that tops Red Sox-Yankees. The history, the hate, the talent, it’s all there. And for the first time since the Red Sox made their dramatic comeback in the ALCS in 2004, the two teams will meet again in the postseason. If you like baseball, you’re looking forward to this matchup. If you love baseball, you can’t wait. If you’re a fan of either one of these two teams, you could’ve seen this coming from a mile away, and now that it’s here, it has your undivided attention. It’s what both fanbases wanted. Look back at the Wild Card game from Wednesday night. In the 7th inning, you could hear what the Yankee faithful was chanting loud and clear through the broadcast: “WE WANT BOS-TON” All season these two have been going at it for the American League East, all season they’ve compared and contrasted, and finally, it’s time for some good ole fashion hatred to show. It’s Red Sox-Yankees, don’t act like you’re not excited.

The teams played 19 times this season, with Boston winning 10 and New York taking 9. Boston won 108 games, New York won 100, although according to statistics from Elias Bureau if Aaron Judge had not been on the DL for almost 2 months, New York would have won over 108 games. The two teams love to hate each other, just look back at the game from May when Joe Kelly nailed Tyler Austin (who is no longer on the Yankees) and Austin charged the mound, inducing a benches-clearing brawl. Boston will send Chris Sale out for Game 1. Against the Yankees, Sale has a 0.67 ERA and is 2-0; however, since July 17th, Sale has only thrown 17 innings due to elbow inflammation, and he’s clearly hurting as his fastball in his last start only topped out at 94 mph. The Yankees will counter with J.A Happ, who they acquired at the trade deadline specifically to pitch against Boston. In 18 starts against the Red Sox, Happ has a 1.78 ERA. And while pitching is important, these two lineups are the best in baseball, by far. Take a look at the statistics below and you’ll see just how evenly these two lineups are:

The Yankees also hit 267 home runs this season, a major league record, and became the first team to have every spot in the batting order hit more than 20 home runs. The Red Sox love to steal bases, as they stole the 3rd most in the majors this year, and it’ll be up to Gary Sanchez to keep them at bay. While Sanchez has one of the best arms in baseball, he’s spent over 3 months on the disabled list, so his stats are down this year. Look to see how aggressive Boston will be against the Yankees in the aspect. The biggest difference in the two is the bullpens. While Boston has a great closer in Craig Kimbrel, they have nobody to get from the starter to Kimbrel. Meanwhile, New York has a whole slew of guys that can shut down any lineup including Zach Britton, Dellin Betances, David Robertson, Chad Green, and of course, their closer Aroldis Chapman. Boston will send David Price to the mound in Game 2, followed Rick Porcello in Game 3, and former Yankee Nathan Evoldi in Game 4, should that be necessary. Against the Yankees, David Price is 0-8 and has allowed 20 runs in 15 2/3 innings against the Bombers this season. He’s also struggled mightily in the postseason since he came to Boston posting a 5.03 ERA, and having a 0-9 record. Earlier this season, Porcello and Evoldi shut down a Yankee lineup that did not include Luke Voit, Andrew McCutchen, Gary Sanchez, or Aaron Judge. Porcello threw an 84 pitch complete game shutout, while Evoldi threw a solid 7 innings. The Yankees will send Masahiro Tanaka to the mound in Game 2, followed by Luis Severino in Game 3, and most likely CC Sabathia in Game 4, should that be necessary. Tanaka has been lights out on the road going 7-1 with a 3.47 ERA. And we all saw good Severino looked Wednesday night against Oakland. 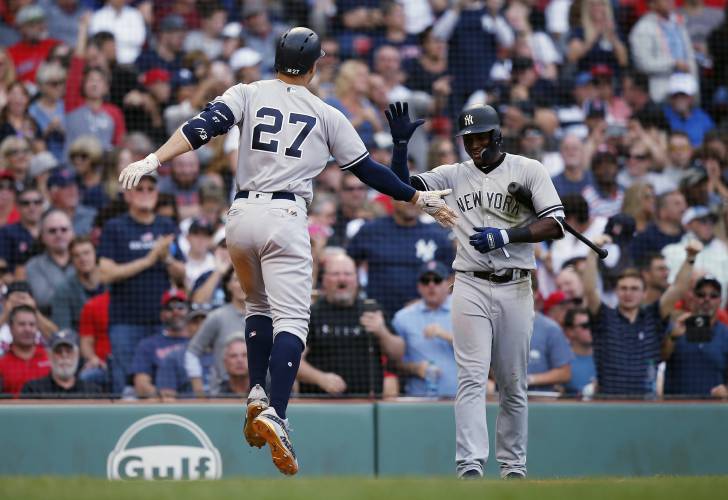 The Bronx is hot, and so are the Yankees. Probably the hottest team in baseball, New York will come into this series looking to make a statement. The lone time these two teams faced off in a series, while both were healthy, was last week, with the Yankees taking 2 of 3 at Fenway. I’m rolling with the Yankees because they have the better bullpen, have better starters, and their lineup is much deeper and more intimidating than Boston’s. Pitching Severino in the Wild Card game was a brilliant move by manager Aaron Boone as it will set up two guys who have pitched well against Boston and on the road to pitch the first two games, and leave Severino to pitch Game 3 back home where he’s most comfortable. Giancarlo Stanton came to New York to play in the postseason. We saw what he could do Wednesday night as he hit that mammoth home run in the 8th inning. He’s also played REALLY good against Boston hitting 5 home runs with 17 RBIs and batting .371. I think he continues those numbers and propels New York to the ALCS. The big thing here is if New York wins Game 1, this series could very well be a sweep.