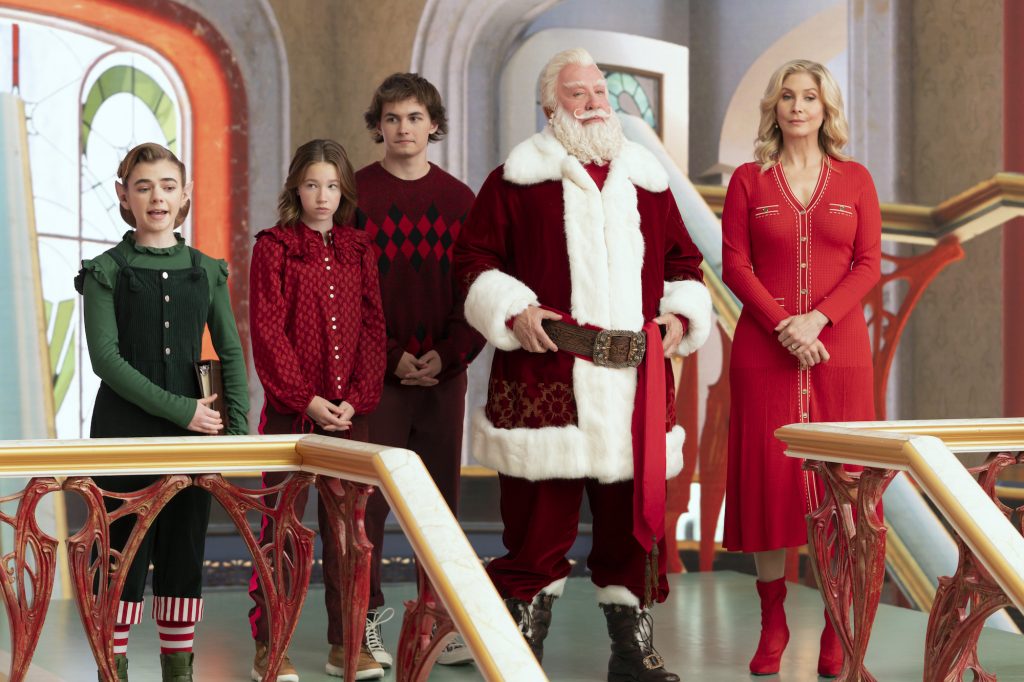 It’s not the Christmas season without at least one viewing of The Santa Clause. There’s just something about that movie that’s so fun. But the sequels were always more of a mixed bag. Narratively, they just kept repeating themselves. And while they continued exploring the mythos in new and exciting ways, they never felt quite as magical as the original film felt. Enter Disney+’s new series, The Santa Clauses. Set sixteen years after the most recent film, The Santa Clause 3: The Escape Clause, The Santa Clauses hopes to reinvigorate this beloved series for an entirely new generation. And in some ways, it probably accomplishes that. But in other ways, it feels like an exercise in nostalgia, aimed squarely at those who grew up with the original movies while continuing to lack a lot of that original spark.

It’s been nearly three decades since Scott Calvin (Tim Allen) first put on the Santa Claus suit. And in that time, he’s gotten married, almost given the North Pole away to Jack Frost, and brought Christmas joy to countless children all across the world. But after all this time, his magic’s beginning to fade. In this modern world filled with online shopping and virtual reality experiences, is there still a place for Santa Claus? And if there is, is Scott Calvin even the person for the job anymore? After one particularly disastrous Christmas Eve, Scott finds himself asking these very questions and facing a dilemma that eventually plagues everyone – is it time to retire? Can Santa Claus even retire? And if so, who would become the next Santa?

Based on its first two episodes, The Santa Clauses is as frustrating as it is fun. It’s hard to judge the story as a whole yet because, after two episodes, it hardly feels like it’s gotten started. The episodes act as an hour of exposition, killing time until the story properly kicks into gear. An hour-long first act, if you will. If you’ve seen the trailer, you’ve already got a better sense of where the show’s going than you’ll have after episode two. That’s not to say that the first two episodes are bad or anything, though. Far from it. But they move at an absolute snail’s pace, and you never fully shake the feeling that you’d be having more fun watching a ninety-minute movie than a six-episode series.

A Mixture of Intrigue and Nostalgic Excess

That being said, the premise itself is an interesting one, certainly interesting enough to carry a Santa Clause sequel. The idea of the current Santa needing to find a replacement is a great one. As is the continued expansion of the Elves as this weird sort of North Pole bureaucracy, keeping everything moving behind the scenes while Santa does whatever Santas do in the off-season. As far as Christmas stories go, there’s something here. The Santa Clause series has always thrived on balancing the whimsy of the North Pole with Scott’s family life, and that’s where this show thrives. The show explores how being Santa has negatively impacted Scott and his family – an idea previous films hinted at but one which serves as the show’s focal point. And that exploration is genuinely captivating, even if it feels like the show can’t delve into it that deeply.

But for every intriguing angle the show takes, it leans a bit too hard on nostalgia for the original trilogy of films. There’s yet another sub-clause to the original “Santa Clause” for Scott to consider. And once again, he finds himself unsure whether he even wants to be Santa. And, naturally, whatever decision he makes is almost certainly gonna blow up in his face. There’s a big sense of “been there, done that” here. And the way this show tries to modernize the franchise, making references to changing sensibilities and technologies, all feels a bit “old man yells at clouds” for my taste. But at the same time, there’s an undeniable sense of fun. The world-building remains as magical as ever, many of the side characters have delightful subplots, and there’s enough Christmas sweetness to give you a toothache.

It helps that the cast is easily the best part of the show. Tim Allen and Elizabeth Mitchell return as Mr. and Mrs. Claus, and they step right back into their roles like no time has passed at all. The new elves – chiefly Noel (Devin Bright) and Betty (Matilda Lawler) – are a whole lot of fun, all of them having this wonderful mixture of childlike innocence and timeless wisdom. Scott’s kids, Cal (Austin Kane) and Sandra (Elizabeth Allen-Dick), are exactly as strange and quirky as you might expect. And Kal Penn’s Simon Choksi, an inventor obviously being set up as a potential new Santa, makes for a great addition too, and I’m eager to see him interact with Allen’s Santa at some point. With a cast as great as this one, it’s easy to just let the show wash over you and enjoy how much fun everyone’s having.

On the whole, The Santa Clauses feels like yet another entry in this long-running series – for better or for worse. On the positive side, the premise is immediately captivating, hooking you in for what’s sure to be a holiday-themed joyride. And the continued expansion of the Santa Clause mythology is as fun as it’s always been. But on the negative side, the series moves too slowly for its own good, leans too heavily on nostalgia and questionably funny jokes, and doesn’t quite live up to the excitement of its premise yet. But it’s still early days, and if I’ve learned anything from growing up with The Santa Clause, it’s to never doubt this series’ ability to somehow tie everything together with an enjoyable bow. So, ultimately, The Santa Clauses gives you exactly what you’d expect, and it’s worth a watch if you grew up with these movies.

The first two episodes of The Santa Clauses premiere Wednesday, November 16th, on Disney+, with new episodes releasing every Wednesday.

Disney+’s “The Santa Clauses” is as enjoyable as it is frustrating. Its premise is intriguing, but its incredibly slow pacing and overreliance on nostalgia hinder what could’ve otherwise been an enjoyable holiday film. Still, it’s a mostly enjoyable watch, buoyed by a delightful cast, captivating world-building, and holiday cheer.