Tucked among the magical redwood trees of Northern California and surrounded by her grandmother’s gargantuan roses, 17-year-old Lennie Walker, a radiant musical prodigy, struggles with overwhelming grief following the sudden loss of her older sister, Bailey. When Joe Fontaine, the charismatic new guy at school, enters Lennie’s life, she’s drawn to him. But Lennie’s complicated relationship with her sister’s devastated boyfriend, Toby, starts to affect Lennie and Joe’s budding love. Through her vivid imagination and honest, conflicted heart, Lennie navigates first love and first loss to create a song of her own.

It’s impossible to fully prepare someone for how to handle the loss of a loved one. Even if you were to somehow completely contextualize the full range of emotions one may feel, it doesn’t mean that those feelings will materialize. Some may not feel anything, some will have a full breakdown, some will move on quickly, and others may be affected for years. Not to mention, the funeral is just as difficult to traverse. In the midst of either experience, you begin to ponder your own mortality. You may also think about the people, things, and what matters most to you. Unfortunately, it often takes tragedy for us to realize what’s important. Hopefully, we can do better going forward.

“I’ve lost the one person on Earth that understood me.”

Every once in now and then we need a reminder that life is beautiful. I feel it’s especially necessary for our younger generations. Based on a novel of the same name by Jandy Nelson, The Sky Is Everywhere is an imaginative awakening of love amid grief. Directed by Josephine Decker, this transformative coming-of-age story while dark, is full of light and while dealing with death is exploding with life. Taking the loss of a loved one in a truly expressive and unique direction results in something fresh and entertaining. While its exterior is pain and the difficulties of coping, at its core, it’s a story of blossoming romance. Rife with teenage drama, angst, and energy, the idyllic setting allows the acting to flourish and the dream-like visualizations of feelings to pop as they take shape. Filled with creative sequences of emotion and great camerawork, the film succeeds by being completely in touch with its feelings. With themes of friendship, family, perseverance, and chasing dreams, this is a story that can be enjoyed by most. The writing is very enjoyable. There’s a subtle sophistication that jumps out at you coupled with honest narration on what it feels like to live through a confusing and heartbreaking time in one’s life. Despite its subject matter, the film is optimistic and encouraging from beginning to end. Whether it be a friend who sticks around no matter how mistreated they are, family members who reinforce their love, or a crush that sees only the best qualities at the lowest moments, positivity and conquering the devastation of loss are at the forefront. All lifted up by music and the search for lost music, the film does miss a few beats. However, it’s hard not to get drawn in by one of the other aspects. I’m curious to hear what fans of the novel think. This is a film that you either love or you think is just okay, but I can’t see anyone hating it. Its rewatchability is medium.

While the story dealt with grief on its surface, the pacing of the film is rather lively. This pain of loss is not a stagnant one, rather one that badly wants to be anything but. However, I do think it could’ve benefited from taking its time in some instances. What popped for me was the tangible nature of Lennie’s imagination. My imagination is very visual and expressive so it was cool to visually see how someone is feeling.

The cast is very enjoyable. Grace Kaufman as Lennie is a great representation of the intersection of teenage angst and grief. She delivers a terrific performance. Her chemistry with heartthrob, Joe (Jacques Colimon) is exciting and genuine. Colimon’s performance is exuberant and full of life. These two relatively new faces are sure to have a bright future. Jason Segel is a perfect fit for this story as Uncle Big. We get the wise stoner Segel that we love. Some of the best chemistry comes from the unexpected connection between Lennie and Toby (Pico Alexander). It feels extremely intimate but also extremely inappropriate due to the circumstances.

The Sky is Everywhere is now streaming on AppleTv+ as of February 11, 2022. Stay safe and enjoy. 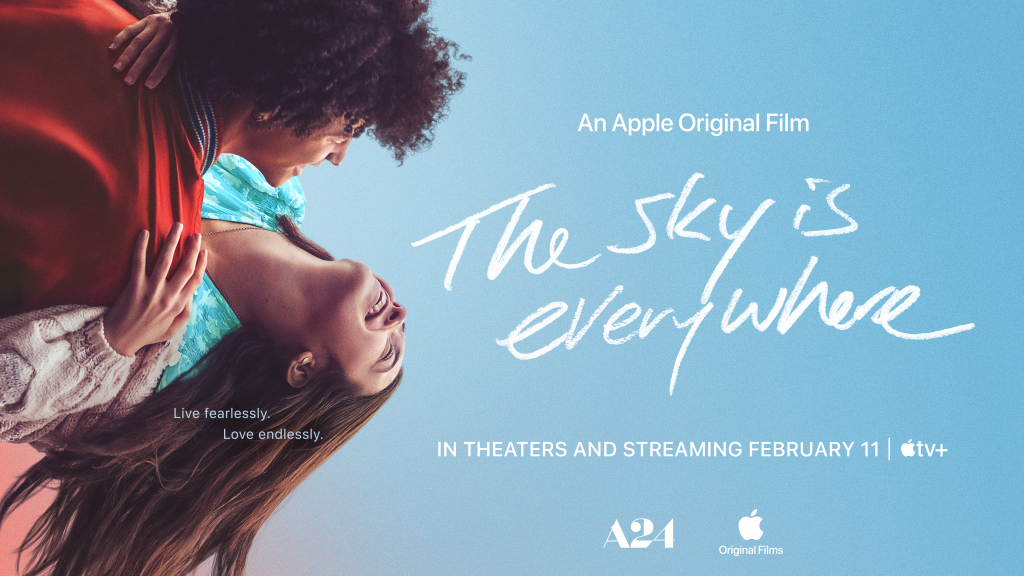 Based on: Novel of the same name by Jandy Nelson