The Top 10 Non-Christmas Christmas Movies Ever 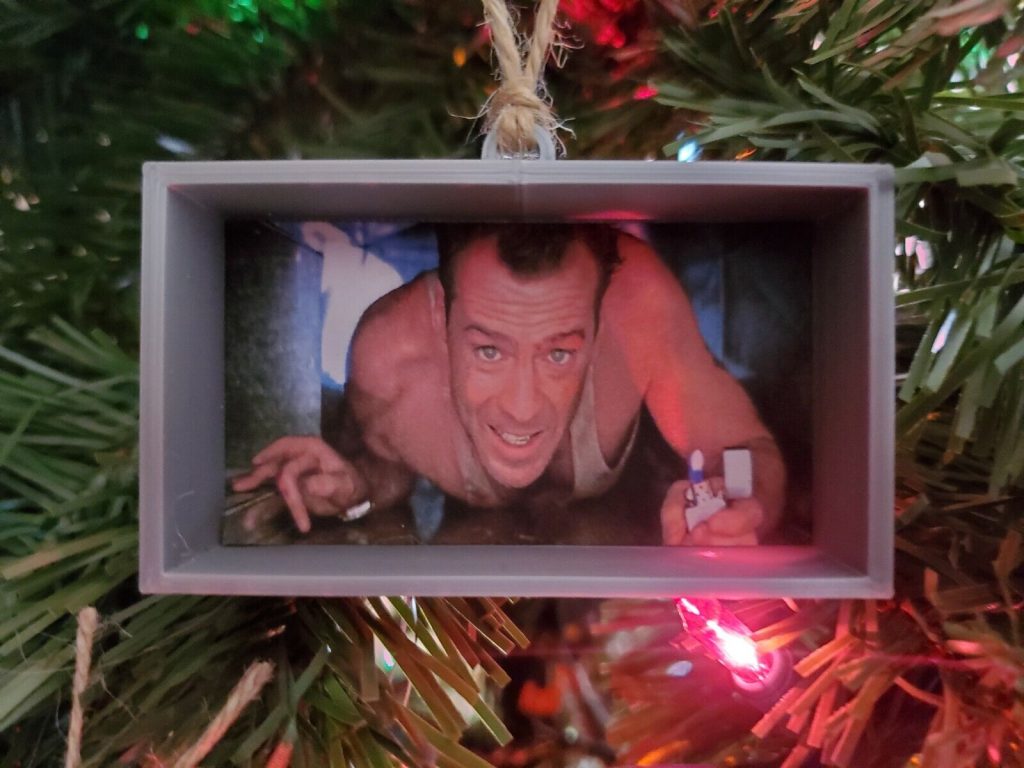 A list of non-Christmas Christmas movies will stir up some “Bah, humbug” vibes, so let’s do this! Now, before we do, the Author’s Memo below discusses the elephant in the room, so tap the brakes on your views for a second.

While said colossal pachyderm always leads to a listicle like this, there are many more non-Christmas Christmas movies than you may think. For a film to be “of the holidays,” several things must be displayed. You know the signs? Carols, gifts, references to Santa, and even spiked egg nog.

It’s not an unwritten rule of cinema, but just because a movie scene shows someone singing “Jingle Bells” in the shower doesn’t mean the movie belongs to the holidays.

Cinephiles and Yuletide enthusiasts can count on certain films making the rounds every year. Turn on the TV, and you may run straight into Clarence Odbody, Ebenezer Scrooge, or Buddy the Elf. Shoot, there is even a 24-hour marathon of Ralphie and his quest for an “official Red Ryder, carbine action, 200-shot, range model air rifle, with a compass in the stock and this thing that tells time.”

Nonetheless, there is a truckload of movies that, while technically not a “Christmas movie,” are so Christmas movies. (And, no, we are not counting Yuletide horror movies here. Sorry, kids.)

Here are the Top 10 non-Christmas Christmas ever.

Author’s Memo: Now, for that movie. The one that begins or ends any list on this subject.

You know what’s so screwy about Die Hard? John McTiernan directed one of the most prolific action movies in history. The film solidified Bruce Willis as top-tier talent. It introduced one of the best characters ever in Hans Gruber, played by the superb Alan Rickman. It was amazing. No one discounts its place among the all-time greats.

However, this movie sparked the entire “What even makes a Christmas movie a real Christmas movie?” If you have tired head over this age-old argument, look no further than the people responsible for Die Hard in the first place.

For the defense: Die-Hard screenwriter Steven E. De Souza. He wrote the movie with an understanding of character, plot, and theme discovery. If anyone should know if Die Hard belongs with the iconic favorites, he should. Right?

For anyone unconvinced #DieHardIsAChristmasMovie, here is a handy chart pic.twitter.com/FhkzPIG0ms

A convincing argument, counselor. For the prosecution, we have the man himself, Bruce Willis. Admittedly, he was half-hammered at his unassailable Comedy Central Roast amid a room of hilarity, but he made global news when this NSFW moment took place. (Ask the kids to leave the room.)

So, there’s that. On with the show to discuss numbers 2-11, because this will always be tops on a list of non-Christmas Christmas movies…

Anyone having a ham for Christmas? See there? You almost forgot the Christmas season in this film. You probably know the story about a persistent pig who finds his purpose amid a flock of sheep. Cute. And then comes, “Christmas means carnage!” The hell?!

Because when a parent wants to watch a wholesome movie with talking animals, the idea of Santa as an axe murderer always does the trick. Who cares that Babe sings Christmas carols and herds sheep? That’s a plate of bacon and pork chops with feet, so one possible heartwarming story becomes a movie akin to something you see in Saw. Yeah, that’ll do, pig. That’ll do.

The holidays are even referred to in the title of the Christmas movie. This casino heist at the turn of the century film has a meh existence in the world of the cinephile (or Ben Affleck fan). That’s a fancy way of saying, “This suckfest was made a couple of decades ago.”

However, the film is smack dab in the middle of Christmastime. The John Frankenheimer-directed movie (this was his last) was even supposed to be released during the holidays in 1999, but was delayed until February 2000 after poor test screenings. Now, if the holidays don’t even want you, so much for being considered a Christmas movie.

Hark, the Herald Angels are signing…what in the world is wrong with Tim Burton?! Some AI-morphed dude recreated, but the budget for Ed (Johnny Depp) went awry in prosthetics, so he gets scissors for hands. Man, Burton’s meth dealer must be one rich individual!

To make matters worse, for what appears to be a holiday-set movie, Edward Scissorhands is just shy of being chased out of town by people with pitchforks and broomsticks. Yet, the trimming of Christmas trees is supposed to make us feel warm and fuzzy. Yeah, not so much. (And don’t even get us started on The Nightmare Before Christmas.)

If you are in the Stephen King camp of “Why I hate Stanley Kubrick movies,” this is Exhibit A. Fifty Shades of this. Don’t Worry Darling that. No gratuitous horndog fest in Hollywood holds a candle to Eyes Wide Shut. And many people think this is a holiday film. Yeah, I don’t Mrs. Claus is quite this much of a freak.

If you haven’t seen this movie, written by Shane Black, you’re definitely missing out. Geena Davis is a typical housewife, outside of having amnesia where she forgets her past as a world-class assassin. Samuel L. Jackson rides shotgun on her journey to discover her past as a CIA operative Charly Baltimore–and save the planet. And it all takes place during the holidays.

This Steven Spielberg film was a marketing machine, and being set during the holidays made it even more lucrative. Did it have to be during Santa Claus coming to town? No. Did it help? Most definitely! The fun part about this film is Mogwais (the Gizmo to Spike experience) are walking naughty-nice lists.

They’re adorable unless they parade through the pantry at night or take a dip in the pool. Then, Christmas is over, and all hell breaks loose. You almost forget the season right after Kate (Phoebe Cates) shares the most heinous Christmas memory ever about her dad coming down the chimney and breaking his neck as he is stuck. Really, Steven?! Yeah, not feeling the Kris Kringle joy buzz there.

Once considered the best comic book movie sequel, Batman Returns takes us back to Tim Burton’s vision of Gotham and cranks it up to 10. To make it extra special, the film is ripe with holiday allusions and references, like when Batman (Michael Keaton) and Catwoman (Michelle Pfeiffer) get a little randy under the mistletoe.

Gotham is stripped of the reason for the season, yet, many people still think of this classic sequel as a holiday must-see collection of stunts, characters, and action. One problem with that is the “gift” of this movie. If you know, you know. If not, take some time to travel down a rabbit hole about the crisis communications issues McDonald’s experienced putting the Penguin (Danny DeVito) inside Happy Meals.

Why was there no Number 3 of Tim Burton’s vision? That’s why. It’s not the most wonderful time of the year, always.

Where my nerds at? You knew this movie was coming up in conversation, so did Shane Black purposely make Tony Stark (Robert Downey, Jr.) into Santa Claus? Remember the scene when Tony is testing his new super suit to the tune of some dubstep version of Jingle Bells? Or, what about when he goes for a pensive walk in the snow nearing Christmas Eve? Did any of that put you in the Christmas spirit?

There are also a few other “in-your-Yuletide-mush” references like:

Take the snow and Christmastime references out of the film. It could have taken place during the dog days of summer; it’s still Iron Man 3. And let’s not forget Black’s love affair with Yuletide settings–see The Nice Guys, Lethal Weapon, Kiss Kiss Bang Bang, and the aforementioned The Long Kiss Goodnight.

The holidays are just his jam. Yet, this is a major “Ho-Ho-No” in the minds of many cinephiles.

Oh, the great John Landis. What an excellent Christmas gift he created in Trading Places. Or, was it? The movie almost exclusively is filmed around the holidays, but it doesn’t really matter when you see the splendid performances of fellow fantastic SNL alums, Dan Aykroyd and Eddie Murphy.

Ah yes. There’s no place like home for the holidays.

This is one few people seem to understand being included in the non-Christmas Christmas movies conversation. Yet, despite it all, Frozen always ends up in the “Need to watch this during the holidays” list. Why? Even the first word of the trailer is “summer.”

There is no celebration of the holidays. Cold doesn’t mean holidays. And if you live up north, not even reindeer means the North Pole. No Santa, no Rudolph, no gifts–except for that one song‘s never-ending siege on our nerves. The only slight connection is Olaf could be a distant cousin to Frosty. Oh yeah, trolls in the Ice Kingdom could be elves, but that’s a serious stretch. The movie has a ton of snow and ice, but it has zero connection to Christmas.

World famous? For certain. Holidays? Eh, not so much. So, can we please just let it go, now?!