The Top 10 ‘Wakanda Forever’ Easter Eggs You May Have Missed 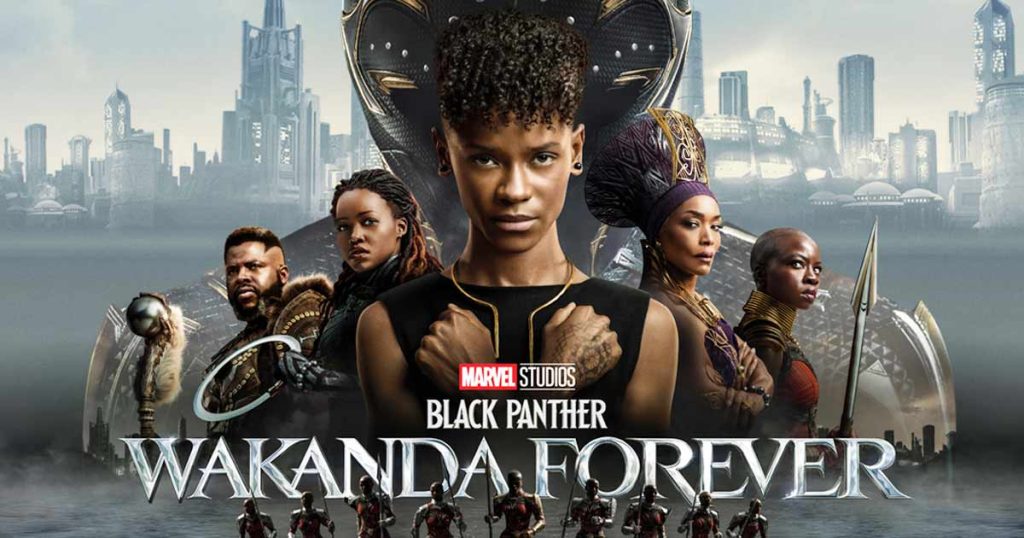 Now that Marvel Studios has blown our minds, it’s time to chat up the Top 10 Wakanda Forever Easter Eggs scattered among the crooks and crevices across Wakanda and Talokan. If there was ever a movie in Kevin Feige‘s fiefdom that has created polarizing debate and uncertain discussion following Chadwick Boseman‘s death, it’s this one.

The heroic way Boseman died was enough of a story to make fans–and friends–everywhere mourn and celebrate his career. But now, how would Ryan Coogler commemorate his legacy?

When I wrote an obituary about the man behind the mask, full nerd tears on display rolled down my cheek onto my dusted keyboard.

When I went to see the movie (and no spoilers…yet), there were more nerd tears. Yet, finding these brilliantly placed Easter Eggs (and some were Cadbury quality, no joke), I applauded.

That’s the art of movie making–when a true dork understands the nuance of the subject matter but still takes the time to hide some subtle nods of appreciation. Coogler is that master dork, and we owe him some heartfelt thanks!

Author’s Memo: Consider yourself warned. Past this point is a minefield of spoilers! Please bookmark the page and come back. All of us at Geek Vibes Nation appreciate your patronage. But, trust us, you want to see how Marvel Studios and Ryan Coogler placed the Easter Eggs with grace.

That said, this entire movie is one orb of Easter beauty dedicated to Chadwick Boseman. So, this won’t be about the gorgeous mural we saw in the trailer or the remarkably beautiful tribute of silence and tears in that Marvel Studios montage.

But, seriously?! There has never been anything more lovely in a CBM film than that. And probably, never will. (The sound of the wind was deafening–and it was nothing but respect!) This was the one from four years ago. Trust me. Don’t miss the tribute to kick off Wakanda Forever. Love!

New Asgard was funny when we saw “Fat Thor.” It was cute in the latest moment in Mr. Odinson’s saga, but it’s not gone…yet. There is a point in Black Panther: Wakanda Forever where CNN gets some pub, mainly Anderson Cooper as Marvel Studio’s favorite newscaster. As the Talocans wreak havoc on the surface world, news is needed.

There’s some bad news about Queen Ramonda during this particular breaking news report. During the report, if you look below Cooper’s baby blues, you see the crawl sharing news about a treaty taking place at New Asgard. You may recall Thor’s (Chris Hemsworth) peeps call the place Midgard. So, there’s more to come to the idyllic New England tourist town. Stay tuned in Phase Five.

Who is Bashenga? He was a warrior shaman in Wakanda who ended up as the first king and first Black Panther of the secluded African nation. Following a visit and vision from the Panther Goddess Bast, he united four tribes across his land. We hear about the mountain named after him, where Vibranium was stockpiled. He was also mentioned in during King T’Challa’s funeral and during the prologue discussing Wakandan history. Nicely done.

If you have watched any Marvel animated features on Disney+, or listened to any DCAU programming, you know the actress Lake Bell. Her inaugural MCU appearance was in voice only as she voiced Natasha Romanoff’s Black Widow in What If…? In the movie’s first few scenes, she qualifies to become one of the Wakanda Forever Easter Eggs.

Granted, she gets smoked, but she’s there. It’s probably hazing since Lake Bell is more well-known as Poison Ivy in the tawdry animated Harley Quinn. And no kidding, don’t sleep on animated nerd gems. Lake Bell is fantastic in DCAU! Maybe she’ll bring that love to Marvel. You know, if she’s given more than 20 minutes.

Speaking of the acclaimed Panther goddess, what did you think of the high-tech armor Shuri created for the Dora Milaje? Every branch of the military has its elite force.

The Army has Green Berets. The Navy has SEALs. Marines have Force RECONs. Air Force has the Thunderbirds. And Wakanda has the Midnight Angels, direct from the pages of Doomwar No. 5 in 2010.

Quick note: Battling Namor was awesome, but is this a link to the future? The Midnight Angels were established to fight Dr. Doom. Uh-oh!

I almost forgot something. The Midnight Angels’ aesthetic is fresh from how Bast was originally conceptualized in comics–the ribbons as dreads and all. That makes one of the movie’s most thoughtful Wakanda Forever easter eggs.

Among the top Wakanda Forever easter eggs, there was a small chocolate-filled morsel along the trail and a massive one that probably had $50 inside. The small one was during T’Challa’s compelling funeral. We get an aerial shot of the King’s casket and his challenge weapons from the original. Nice. And then we got Aneka’s unique daggers.

If you watch the movies only, you thought Ryan Coogler wanted to make his new warrior a little different. If you read the comics, you howled. Those Vibranium Energy Daggers didn’t begin with the Midnight Angels. Those were T’Challa’s! His suit was made to generate knives and fire them like darts at will. Solid nerd reference. By now, every fan knows Wakanda Forever was not kicking off Phase 5 of the MCU. This was the closing of Phase 4. Kevin Feige is always looking ahead and positioning the future. While everyone was preparing to meet Namor, he knew we were all giddy about already being introduced to Kang (Jonathan Majors)!

Ant-Man and the Wasp: Quantumania is on everyone’s minds. It was one of the trailers before we entered Wakanda. So, this attack warranted a cameo by CNN’s Anderson Cooper. As he is reporting about the Atlantic Ocean issue, there is a note in the crawl about a Scott Lang (Paul Rudd) memoir entitled “Look Out for the Little Guy.” Who’s next in the MCU to hit theaters? Ant-Man in February 2023. #ChefsKiss

Nerds and comic characters love their catchphrases, so what will stop a dude who lives underwater? Nothing outside figuring one out that extols the greatness of shellfish or something like that. With Namor, Stan Lee wanted something that sounded a little more academic. He didn’t go back in time to find something in Sumerian or Koine Greek. Stan Lee kinda’ made it up.

Therefore, the “King” of his “Empire” would cry that into battle, as in, “This is why I do what I do!”

Fans were expecting it, and Marvel didn’t disappoint as Trevor Noah was back–and expanded–as the obedient but slightly snarky assistant in the lab rat cohort, Griot. His dulcet tones are heard throughout the movie, pointing the Wakandans in the right direction. And although his vast knowledge could help Shuri save T’Challa, he appeared in one of the Wakanda Forever Easter Eggs.

But, if was another A.I. reference that deserved our attention. Queen Ramonda (Angela Bassett) isn’t a fan of Griot or anything technology that acts, but she can’t see. In fact, she believes “A.I. will kill us all.” Remind of you of any previous concerns? Was anyone giving homage to James Spader and the underrated brilliance of Avengers: Age of Ultron? You should have. That was intentional.

You know that you have a successful brand when they own a word. The X-Men is one such brand. Say it with me…Mutants! For the “M”-CU, that has been the “M-Word” because Marvel owned, but didn’t own, mutants. At one point, Marvel Studios were going to have a coming-out party. Sure, we saw Reed Richards in Doctor Strange 2, and Ms. Marvel discussed a “mutation,” but there’s power in that word.

Then, Namor flexed, and it was brilliant. As Namor shares his origin story with Shuri, he says, “I was a mutant!” That line should not go unnoticed among the CBM elite. This is certainly one of the most Cadbury-esque Wakanda Forever Easter Eggs possible. We’re talking butt-puckering, breath-gasping, fist-pumping greatness. Welcome back, Mutant…eh, Marvel.

This is No. 1 for an important reason — a hypothesis, but it includes sage insight, so check this out.

In trailers and the movie, we get a snoot full of Shuri’s new and intricate tattoo. Nothing is by mistake, so Coogler and Feige want us to stare and come to our nerd blogs to guess what it meant. Look at that thing!

Shuri spends a fair amount jacking around with friends’ and her brother’s double helix in the original and in Wakanda Forever. However, that’s a touch more purposeful work wrapping around her knuckle. She is a typical scientist–logic is paramount, but faith is not so much. That mindset is present during the film as Shuri tackles the supernatural fables of her youth.

However, there has to be more than that, right?

Linguaphiles and Philologists have determined all those cool symbols in Wakanda are actually a language. They’re called Adinkra–symbols depicting West African symbolism (near Ghana) seen in design for a more authentic feel. Elsewhere in both Coogler-directed films, we have a “lost iconographical language” native to Nigeria, Nsibidi. Both of those have been used delicately to create “Wakandan.”

Using a legend from Adinkra and Nsibidi (featured on the great website Omniglot.com), the venerable mural seen during the T’Challa funeral says something to all of us, “The Panther King Forever Live in Us.“

All that to say Shuri’s tattoo must be Akindra in nature. Its foundation must be mathematical. And so, look up “supersymmetry.” In the deep-cut Math world, that’s another hypothesis that stresses all particles of nature are connected through a deep relationship, which opens minds up to the existence of other particles. Essentially, a belief the universe is limitless and even things lost are still within reach. And when I looked up “Akindra math,” I found this; hence, my A-ha moment!

(And I’m not repeating this ish again. It is the best among these Wakanda Forever easter eggs.)