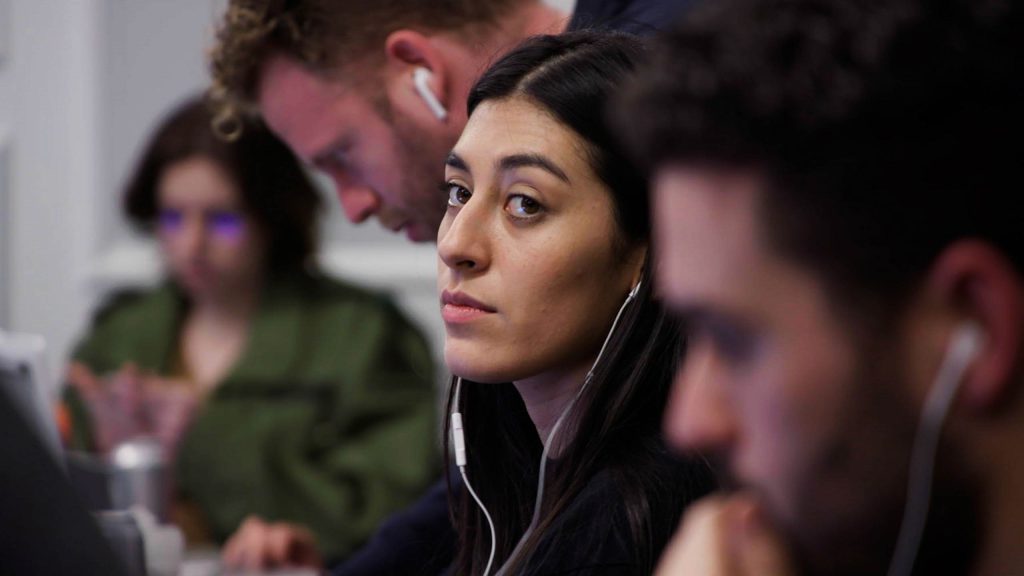 Alexandra Rojas appears in To the End by Rachel Lears, an official selection of the Premieres section at the 2022 Sundance Film Festival. Courtesy of Sundance Institute.

The documentary To the End begins with an apt quote describing the state of the climate catastrophe in the US: “The crisis consists in just this: the old world is dying and the new world cannot quite be born. In the meantime, all kinds of dreadful things are happening.”

Appropriately, the documentary opens with devastation. Climate activists from the Sunset Movement drive through the wake of the destruction caused by record breaking wildfires. One recalls the town that used to be there: a shopping center, a Safeway, a yogurt shop; residents, trapped in the blaze by narrow road which prevented easy evacuation. Another picks her way through a pit of twisted rusty metal and snapped wood that used to be a building. As the camera pans over the devastation, it cuts to a video of the fire itself: a car zooming through a blazing inferno, surrounded on all sides by flames and smog that looks like it erupted straight from the pits of Hell itself.

“There’s a sense of, ‘It’s here, and it’s terrifying, and it’s real,’” the activist says in a voiceover.

By “it,” she means climate change, one of the greatest problems facing our world at the moment, escalating storms, heatwaves, wildfires, and more disasters across the world. The Intergovernmental Panel on Climate Change (IPCC) has issued progressively more dire reports over the years. Nearly three years ago, now, they predicted that we only had 12 years left to avoid climate catastrophe; in 2021, they warned of irreversible damage to the planet should the crisis not be mitigated.

It’s fitting, then, that the next documentary project from Rachel Lears would feature the fight against climate change on Capital Hill. Lears gained acclaim for Knock Down the House, a documentary which followed four progressive politicians as they campaigned for congressional seats. To The End offers a similar insider’s view in the electoral process: it follows a diverse group of activists, lawmakers, policy writers, political action committee (PAC) leaders, and more as they all advocate for some form of meaningful legislation against climate change. In doing so, Lears crafts a pressingly important lens into the political fight against climate change—albeit a perspective that is sometimes limited in scope.

The strategies to do this are numerous. Sunset Movement mobilizes the youth, organizing demonstrations such as a sit in at Nancy Pelosi’s office. Alexandra Rojas, leader of the Justice Democrat PAC, speaks to national media and fights for more progressive candidates to be elected into Congress. Alexandria Ocasio-Cortez, whose dramatic election victory was spotlighted in Knock Down the House, campaigns for a Green New Deal that will provide jobs during the transition to clean energy. These are only a snippet of the many influential figures the documentary follows. This is, of course, a lot of ground for one film to cover. As a result, the documentary tends to jump around as it highlights crucial moments, yet never quite gets in depth into the operations of any organization.

The fight is an arduous, frustrating, and often unfruitful one. Progressives face a barrage of attacks from both sides of the aisle, including climate denying Republicans, and establishment Democrats who believe that climate change is either too expensive to mitigate or too unimportant. These attitudes are encapsulated in a scene in which Sunset activists surround Joe Manchin, the Democratic senator from West Virginia, as he heads to his yacht. Manchin has received the highest amount of donations from the oil and gas industry in Congress and is (not so) coincidentally blocking critical climate change legislation. As activists shout at him to prioritize their lives over his profits, he keeps his windows rolled up and forces his way out of the crowd, soundproofed against every criticism of his action.

Of course, climate change is more important than profit—the film takes this fact for granted, emphasizing the “faith” that powers numerous activists to continue fighting for a better, greener, world. This, however, is also the crux of the film’s shortcomings. To The End touches on the impacts of climate change, from flooded subways and streets to raging wildfire, and the promise of jobs the future envisioned by the Green New Deal brings. However, it is light on specifics, assuming viewers already know why and how climate change will impact their lives, how to address the barrage of talking points about high costs and lost jobs, specifics on how legislation can implement “green” jobs, etc.

Ultimately, at times it seems that To The End fails to fully define what’s at stake in this fight. This is a shame, considering that some of the documentary’s most powerful moments are when it foregrounds the devastating impacts of climate change and environmental damage. In one scene, Sunset activists listen as community organizers at Rise St. James speak about the health impacts of the pollution in their community: nearly everyone has had, and knows someone who has had, cancer at a young age. The scene emphasizes the necessity of environmental justice, especially one that features marginalized populations and the fight for racial justice. It’s a shame that these moments are often overshadowed in the broader documentary.

To be clear, this isn’t to suggest that the film should’ve completely abandoned its central premise of following Congressional politics and climate change advocacy. Simply put, a greater contextualization of the stakes of the fight, and the specific policies being demanded, would help significantly strengthen its central argument.

This raises a critical question: who is this film made for? Certainly not to the climate skeptics or deniers, who will not be convinced. Likely not to centrists or moderates as well, who may be swayed by common talking points about the expense or infeasibility of fighting climate change that is frequently parroted in media and establishment Democrats that the film fails to fully address. People in the anti-climate change fight, of course, already know why they fight, and the stakes of what they are fighting for.

Plus, the heavy focus on electoralism, which is sluggish and often frustratingly unproductive, will lead viewers wondering about alternatives to the system. Given that we now have, according to the IPCC, less than 8 years to avoid unmitigated climate catastrophe, is this truly the best we can do?

But perhaps that is the crucial question. As To The End posits, the system is disappointing: the rate of change unacceptably slow, the need for climate legislation pressingly high. Perhaps, then, this is the true impact of the film: a call for all of us to join the fight and demand better from elected officials. And, ultimately, an inspiration for a renewed—and much needed—mobilization that will fully pressure the US government into enacting significant policy that will contain the havoc that a superheating climate will wreak.

To The End had its World Premiere in the Premieres section of Sundance Film Festival 2022.