‘Too Cool To Kill’ Is Just That, and Dangerously Funny 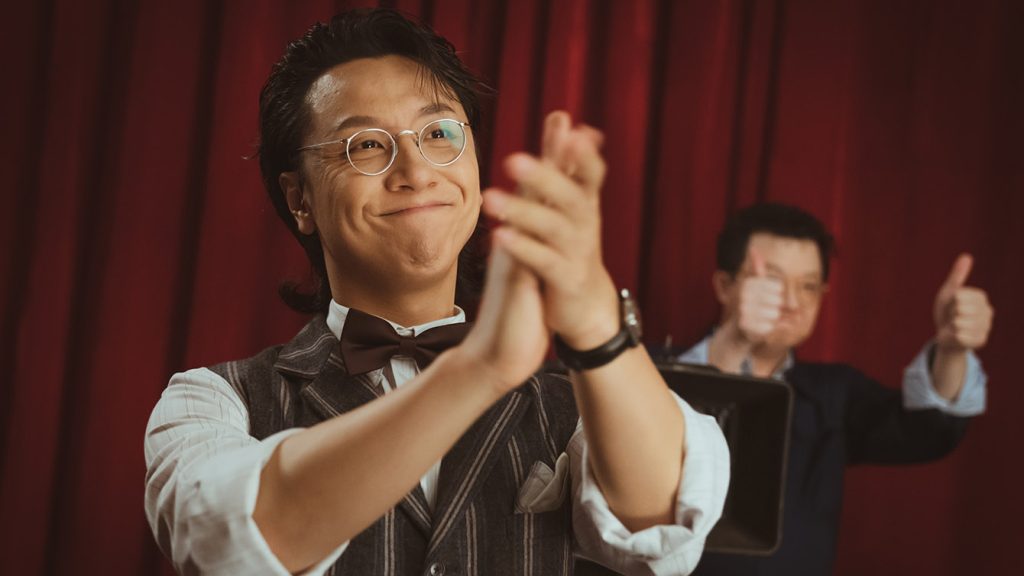 Wei Chenggong is a struggling actor trying to get noticed as an actor and is desperate to get a leading role, no matter what it takes. While on the set of a war film, he brings his character inspiration a little too far, getting himself kicked out of the project. But the film’s director, Mi Le, is visited on set by Mr. Harvey, a violent gang leader who isn’t too happy with the success rate of the production company. Le’s sister Mi Lan happens to be the apple of the gangster’s eye, insistent on marrying her to solidify their “professional” relationship. But neither sibling wants this future so they decide to come up with a plan to escape Mr. Harvey’s sinister influence. Lucky for them, Wei Chenggong is still lurking around on set to convince his director to stay on, and from there is offered the role of a lifetime: Karl, a dangerous hitman whom Mr. Harvey has been looking for since an attempted assassination left him injured and insulted. Wei Chenggong accepts the role on the spot, his first leading role in the history of his career, but under some conditions: the cameras are hidden, all the other actors will never break character, and the director will be on the sidelines to call “cut” if things don’t go right. Show business!

Set in a dream-like diorama world circa the 1930s, Too Cool to Kill wastes no time in establishing itself as a world we still identify with. It has a healthy sense of comedic self-deprecation, but never lets itself get too goofy either. The tone swings back and forth between satisfying screwball comedy and impactful drama, which helps the film blossom into fertile ground for a truly compelling story. Wei Chenggong as Karl struts into each situation with death-defying ease, oblivious that there are no cameras, no other actors, and no safety web other than his own acting prowess. The only tether Mi Le has to his only cast talent however, is himself and his sister. As long as one or both of them are there to keep an eye on their main character they can help guide his performance, lest he realize what’s really going on and doom them all.

The writing is armed with a wonderfully witty bite and balances its variety of tones thrown at both the audience and Wei Chenggong (as well as his character Karl) with ease. At a runtime of 109 minutes the premise never wears thin, rather finding ways to re-use it differently, pleasantly surprising its audience. In some sequences gut-busting chuckles go hand in hand with taut tension, one after the other or even at the same time. Watching both Chenggong’s characterized version of Karl and Mr. Harvey feels less like an intense game of chess and more like a sloppy game of tennis. Each character plays off the other, one helping the other into reaching near-ridiculous heights of one-upmanship, leading to an unlikely (and amusing) affection between the two men. Their performances specifically are just as infectious on the audience as they are to each other, inspiring us and making us feel like we are reacting and laughing right along with them.

The action in the film delivers on a comic book-like intensity that feels just real enough for the audience yet showy enough for our leading man Chenggong to assume that they’re just fancy special effects. Too Cool to Kill is a highly entertaining concoction of self-aware comedy built on a fantastical version of the real world, evoking both light-hearted and dark dramatic gangster yarns from gangster noir titles as well as filmmakers Stephen Chow and Quentin Tarantino.

Too Cool to Kill successfully condenses what draws us to the gangster genre, connects its characters emotionally with its audience amidst flying bullets, speeding cars, and hidden ketchup packets for blood. As the director in the film gifts a struggling actor with his first ever leading role, Xiang Wei is too gifted his first lead role as Wei Chenggong after playing minor characters in previous projects. Be sure to keep the credits rolling for one of the most heartwarming blooper reels you’ll see in a while, and even you’ll be surprised by the film well after it’s over.