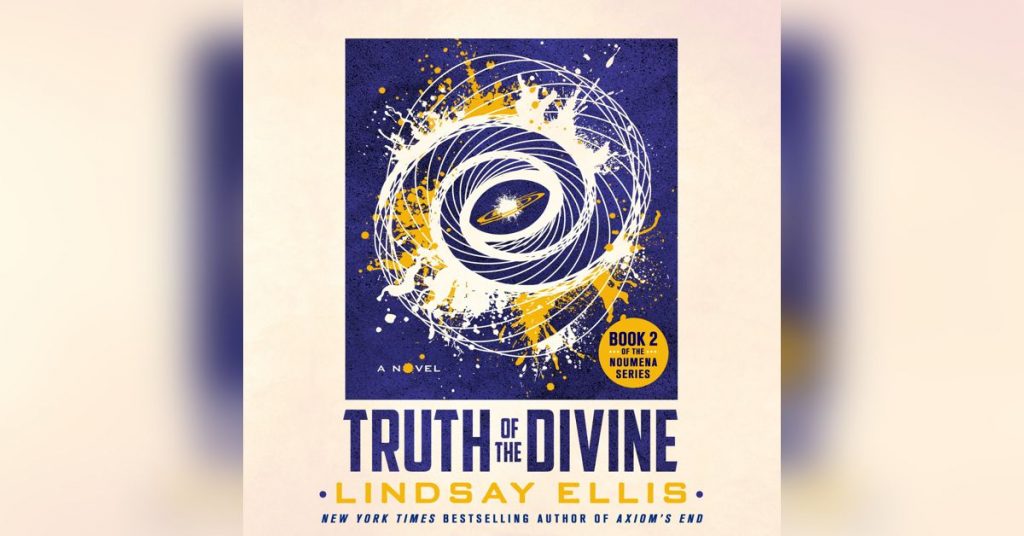 Alien first contact stories are a dime a dozen. They always focus on the immediate impact of extraterrestrial contact – how does humanity survive that first encounter? But what about the aftermath? What happens months later when the dust has settled and the shock dissipates? What are the long-term impacts of knowing humanity isn’t alone in the universe? This is the question at the heart of Lindsay Ellis’s Truth of the Divine. Picking up where the first book, Axiom’s End, left off, Truth of the Divine simultaneously expands the world introduced in that first book while delving even deeper into the psyches of its characters – human and alien alike. Truth of the Divine takes everything that worked in Axiom’s End and makes them even better. And it’s a thrilling, thought-provoking read that stays with you long after the first page.

Picking up a few months after Axiom’s End, Truth of the Divine finds Cora and Ampersand both suffering from some serious PTSD. Cora’s PTSD manifests as nightmares, panic attacks, and intrusive thoughts that stem from her near-death experience with Obelus (another amygdaline, like Ampersand). And Ampersand’s PTSD manifests as erratic and deceptive behavior stemming from Obelus’s death, a fear of humanity, and an overwhelming sense of existential dread. But the two find solace in each other, even as the bond they share increases the pain they feel. Together, there is a chance of healing. Until the sudden arrival of another extraterrestrial sends Cora and Ampersand’s fragile bond – and humanity, itself – careening into a new unknown. The arrival of this new amygdaline, codenamed Enola Gay, only deepens humanity’s uncertainty about extraterrestrials. At question is the personhood of these aliens – should they be granted the same rights as humans?

Truth of the Divine keeps what worked in Axiom’s End and improves upon its weaknesses. The pacing here is much tighter, with no time wasted on introductions. Some might balk at this general lack of exposition. But I appreciated it, as the lack of exposition resulted in an absolutely thrilling read that held my attention from start to finish. Part of this is due to Ellis focusing more on how humanity, at large, reacts to their new knowledge of alien society – and the government’s attempted coverup of this knowledge. But most of the energy comes from Truth of the Divine dividing its focus more evenly between the amygdalines and the humans. This better balance results in a more character-driven story with Cora, Ampersand, and journalist newcomer Kaveh directly influencing events, rather than simply reacting to them. And more dynamic characters lead to a more dynamic story.

A Story About Trauma

One of my favorite things about Truth of the Divine is the way that Ellis dives deep into her characters’ psyches. More than anything, this is a book about trauma. Individual trauma, shared trauma, even societal trauma. It’s such a pervasive theme that Ellis literally includes a content warning at the beginning of the book. And that warning is much appreciated because this book gets quite dark. There are no rosy depictions of mental illnesses here. Instead, it all feels almost too real. Cora and Ampersand both have their own versions of panic attacks, intrusive thoughts, and even moments where they wish they weren’t alive. And even some of the newer characters, like Kaveh, have some issues to work through. It’s dark, painful material.

But there is a sense of hope here. For as dark as things get, seeing humans and aliens alike finding solace is deeply emotional. And this realness is what grounds the book. At its heart, this is a story about people – human and otherwise – coping with incredible amounts of trauma. And this shared emotion is what connects humans and amygdalines. This sense of humanity. The way that painful events can reshape a person’s entire life, ruining relationships, destroying trust, and even unmooring them from reality. It’s the kind of emotional core that hits you in the gut. It hurts to see characters you love in pain. But the way that Ellis explores their pain, and uses it to inform the story she’s telling, is deeply moving. And much of it stays with you long after you finish reading.

Equally impactful is all of the social commentary scattered throughout the novel. Truth of the Divine spends a lot of time exploring what makes a person a person. If a being has consciousness, autonomy, language, and some kind of society, why shouldn’t they have personhood? And as is often the case in these kinds of stories, Ellis draws a direct comparison between humanity’s desire to otherize aliens to their penchant for otherizing other humans. Where Truth of the Divine differs from other stories is in how blatant its commentary is. I mean, multiple characters literally suggest that denying amygdalines personhood on the basis that they’re not human is a slippery slope to denying some humans personhood. So, it’s pretty in your face. But for good reason.

Almost all of the debates had in the book – denying people (or aliens) fundamental human rights, a distrust in government, etc – are ones we’re having right now. Even the way Ellis shows various right-wing militias organizing via online chatrooms and forums feels very 2021. And much of Truth of the Divine‘s fear factor comes from this eerie closeness to reality. I wouldn’t be at all surprised if real-life humans reacted to alien life in exactly the same way Ellis’s characters do. And that’s both interesting as hell and deeply upsetting. I’ve always loved science fiction stories with a healthy dosage of politics – whether that’s Earth-based politics or space-based politics. And the way Ellis weaves these political themes throughout the book is both thought-provoking and extremely well done. It’s in your face, sure. But it works and it feels true to the world she’s created.

My only problem with Truth of the Divine is that, at times, it feels more like a middle chapter than a story in its own right. Axiom’s End explosively introduces the world of the Noumena series, laying down the foundation for future stories. And Truth of the Divine builds upon that foundation, delving deeper into the overarching story – but in a more introspective way. Sure, there are plenty of explosive moments, and action sequences, and sci-fi goodies scattered throughout the novel. And there are answers to some of the questions raised in Axiom’s End. But mostly, Truth of the Divine feels like the setup for a more bombastic sequel. As though Ellis is moving the chess pieces around the board, preparing them for the battle ahead. It doesn’t necessarily feel like the story’s moved forward a lot, but it has grown deeper.

To be fair, there’s absolutely nothing wrong with this. I mean, I enjoyed Truth of the Divine even more than I enjoyed Axiom’s End. But I think it’s important to point out that you’re not really getting an entire story here. Like Axiom’s End, Truth of the Divine does wrap up its central threat by the end of the novel. But it, again, ends on a cliffhanger at the exact moment where it feels like the powder keg is about to blow. And for some, ending before this explosive moment might be disappointing. And that’s fair. A part of me definitely wishes the story kept going just a little bit further than it does. But where things end does make me eager to read the next book, whenever it comes out. So, your mileage may vary.

I honestly can’t say enough nice things about Truth of the Divine. I enjoyed Axiom’s End a great deal, but I had a few problems with the pacing and some uneven characterization. It was a deeply enjoyable read, but an imperfect one. Truth of the Divine, however, feels like Ellis firing on all cylinders. She dives deeper into her characters’ psyches, using them as conduits to weave a sort of morality play about the state of our own real-world discourse. Underneath the science fiction exterior lies an underlying truth that feels enormously relevant to everything that’s going on today. And this commentary is as intriguing as all of the “cooler” alien/sci-fi stuff is.

Everything about the book just works. It’s a dark read, and not always an easy one. But it feels like there’s a purpose to the darkness. And through that purpose comes a sense of catharsis and hope. Even in the darkest days, when everything looks grim, holding onto every bit of humanity you can find might just be what saves the day. It’s an idea found in many a sci-fi book, but one that’s explored beautifully here. Truth of the Divine is a must-read for all sci-fi fans, alien invasion fans, and lovers of Axiom’s End. And I can’t wait to see where Ellis takes the Noumena series next.

Truth of the Divine is available now from St. Martin’s Press/Macmillan in hardcover, ebook, and audiobook formats.

Disclaimer: A review copy of the novel was provided by St. Martin’s Press/Macmillan and NetGalley. All opinions in this review are the honest reactions of the author.