Note: Publicity stills are NOT screenshots from the 4K master

Master Sergeant Sam Harper (David Fralick) is tragically killed in a horrible accident in Kuwait after his helicopter is shot down by friendly fire. Sam’s charred remains are shipped back to his hometown of Twin Rivers, just as the town is preparing for its annual Fourth of July celebration. While being stored at his sister’s house, Sam’s dead body becomes reanimated and goes on a patriotic killing spree over the course of the holiday weekend. Uncle Sam is an over-the-top, tongue-in-cheek satire about America’s obsession with military dominance and the great lengths the nation will go in order to appeal to the country’s youth.

For thoughts on Uncle Sam, please check out our discussion on The Video Attic:

Blue Underground presents Uncle Sam with an eye-popping 2160p transfer in its original 2.40:1 aspect ratio restored and scanned in 4K 16-bit from the original 35mm negative with Dolby Vision and HDR. Among the most impressive aspects of the disc is the application of Dolby Vision for increased color output that has to be seen to be truly appreciated for its grotesque beauty. For a lower budget affair such as this, you do not expect to be so dazzled by the end result.

The film ranks among the best films of this age that I have seen on the format. The new master features some colors in the production design and costumes such as the classic Uncle Sam outfit that pop off the screen with a stark intensity. Lighting is an essential part of establishing the mood of this outlandish tale, from the blinking neon sign outside of Jed’s room to some of the luminous elements at the 4th of July celebration. No matter the situation, this disc handles every slight environmental change with ease. The black levels are outstanding with nothing in the way of crush present, and white levels are solid as a rock with no evidence of blooming.

The level of detail and clarity will blow you away with the perfect amount of natural film grain intact. The grain resolves impeccably well with any previously loose moments tightened up here. The texture on display in the outfits and within the production design are a revelation. Even the special effects details such as Sam’s makeup present with impressive clarity that makes the visuals all the more visceral. This transfer does not register anything in the way of print damage. This presentation is true to the original look of the film with the added resolution making elements seem more natural and immediate. There does not appear to be any jarring digital anomalies such as compression artifacts, banding or any other such nuisances. This presentation is top-tier work from the good people at Blue Underground.

The 4K UHD Blu-Ray disc comes with two great tracks with the Dolby Atmos and a DTS-HD 5.1 Master Audio tracks in the original English. The Atmos track provides an expansive soundscape that never betrays the artistic intent while adding some a bit more depth to the world. While the track does not feature constant activity in the side, rear and overhead channels, it goes towards making the world sound more robust. The environmental sounds such as the din of the citizens at the festival and burning houses are rendered with precision alongside everything else. The score and classic John Philip Sousa tunes have never sounded better and are used impeccably to establish the tone of the story. There is never a moment where it threatens to overwhelm competing sounds, and it maintains a good balance so that dialogue comes through clearly. There does not seem to be any major instances of age-related wear and tear. Blue Underground has given this film a perfectly preserved audio presentation that sounds better than anyone ever could have expected. This disc provides optional English SDH, French and Spanish subtitles. 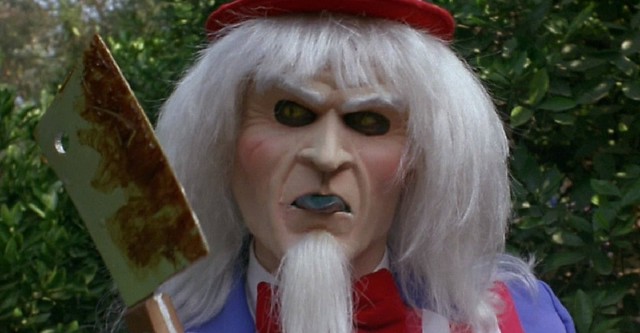 The first-pressing of the Blue Underground 4K UHD Blu-Ray of Uncle Sam includes a lenticular cover while they last. The on-disc special features are as follows:

Uncle Sam is way better than it has any reason to be given its ridiculous logline. Director William Lustig and Writer Larry Cohen nail the satiric tone they set out to execute in a very memorable fashion. The movie is outrageous much of the time, but it is not dumb when it comes to the message it is trying to convey. There are some performances that struggle slightly, but the acting leans more towards the positive along with the strong special effects. Blue Underground has released a sensational 4K UHD Blu-Ray package featuring an A+ audio/visual presentation and some enlightening special features. Fans of the film will be blown away by this release. Highly Recommended

Disclaimer: Blue Underground has supplied a copy of this set free of charge for review purposes. All opinions in this review are the honest reactions of the author.