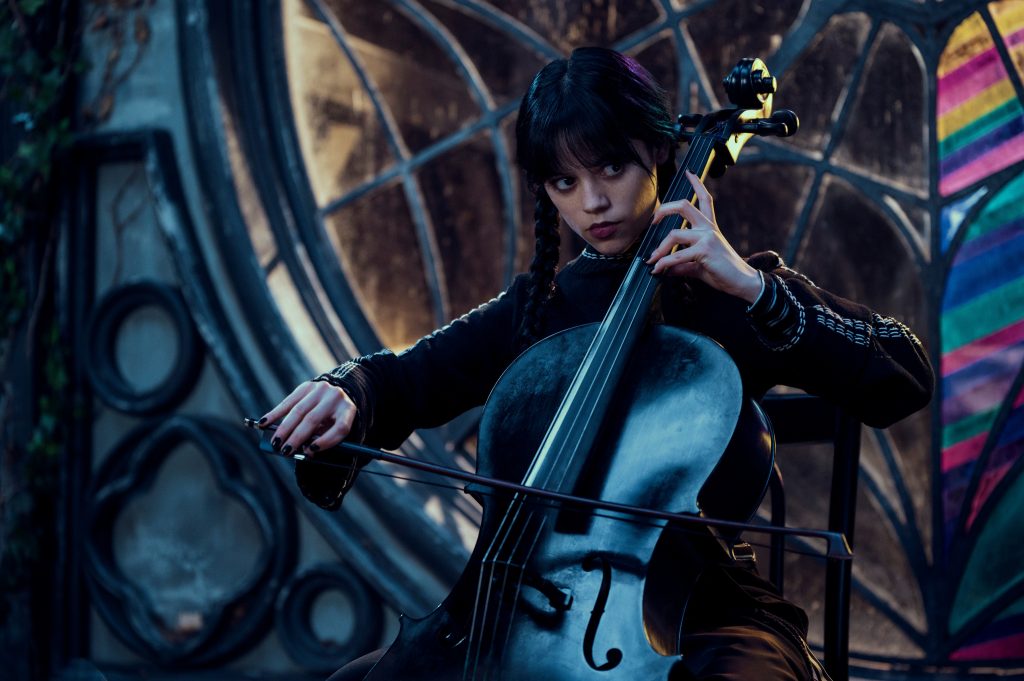 Somehow, The Addams Family never quite goes out of style. Over a lifespan of 70 years, Charles Addams’ iconic characters have remained pop culture mainstays. From cult classics to couples costumes, it’s not difficult to see why. The family’s gleefully macabre sensibilities make for an oddly endearing presence, no matter how mysterious and spooky. The characters surrounding them, more often than not, feel like detritus. The more fun the Addams are having, the more fun we are having.

In that sense, Wednesday makes for a perfect case study in our era of IP-worship. Netflix’s latest original series, a reimagining of the Addams Family mythos in the vein of teen dramas like Riverdale and The Chilling Adventures of Sabrina, is both an attempt to savor what works about the property while also targeting it to a younger, modern audience. It’s a massive expansion of the original 60s series, set outside the family mansion and bursting with original characters, but the show is at its best when it lets the ghoulish charm of the source material speak for itself.

Despite feeling like a soft reboot of the property, Wednesday is an entirely original story set in modern day: after another near-murderous encounter at her public school, Wednesday (Jenna Ortega) is sent to Nevermore Academy, a New England private school for teenagers with supernatural gifts, deemed “outcasts,” and her parents’ alma mater. Upon arriving, we are immediately introduced to a slew of new and original characters, including Principal Weems (Gwendoline Christie), Wednesday’s werewolf-roommate Enid Sinclair (Emma Myers), and teacher Marilyn Thornhill (Christian Ricci, a fun nod to her portrayal from the beloved 90s films).

Wednesday is, naturally, repulsed by the school and intends to escape. However, when she discovers a monster is wreaking havoc in the surrounding woods, she becomes determined to find out what it is and where it came from. As she delves deeper into the mystery, she discovers that her family’s legacy is intertwined with the monster’s origins and strives to clear the Addams name, all the while fighting resistance from Weems and local Sheriff Galpin (Jamie McShane).

For the first time in the franchise, Wednesday is put center-stage in her own story. In fact, she’s the only Addams character to play a primary role in the series (minus Thing, the family’s disembodied handservant, portrayed by Victor Dorobantu). One could see this as a potential misstep, but Jenna Ortega is so inspired in the role that she steals everybody’s thunder with just one glare. The 20-year-old actress has already had a killer year, literally (Scream, X), but this is her true star-making turn. She effortlessly embodies the beloved character’s sterile personality, exacting expert deadpan delivery with every line.

What we do see of the original characters has been effectively translated to modern day without zapping away their ghoulish charm. Wednesday’s relationship with Thing is given a new dimension, filled with plenty of rapport but also a surprising amount of heart. It helps that the visual effects are superb, thoroughly selling the characters’ five-fingered physicality. Luis Guzmán and Catherine Zeta-Jones, as Gomez and Morticia respectively, are a treat, but it’s Fred Armisen as Uncle Fester who steals the show. It’s a rendition of the fan-favorite lightning rod that fits perfectly into Armisen’s goofy wheelhouse and he revels in it.

However, when the show strays from the path to chart its own territory, results are mixed. The political divide between Nevermore outcasts and the humans (“normies”) across town in Jericho makes up a large part of the show’s story, a lot of which delves into CW levels of teen angst and melodrama. Showrunners Alfred Gough and Miles Millar were behind the hit show Smallville, so this shouldn’t be a surprise, but many of the newer, younger characters and their arcs are simply uninteresting in comparison to Wednesday herself. It doesn’t help the performances range from stilted to overdone.

It also feels a bit bizarre, ironically, to see The Addams Family channeled in such a high-genre aesthetic. A lot of the franchise’s humor comes from the juxtaposition between morbid curiosities and the nuclear family lifestyle. Here, the characters are surrounded by fantasy creatures, dark forests, and deceptive intrigue. Part of the Addams magic is lost when the entire show feels committed to putting the fish back into water.

Still, if you’re going to get someone to direct the hell out of an Addams Family tv show, Tim Burton is your best bet. He is only credited as director for the first four episodes, but you can see his fingerprints from start to finish. Burton’s legendary gothic palette is a match made in heaven for Wednesday Addams’ aesthetic, basking in dark shadows and even showing off a few moments of body horror. Netfiix will always filter their shows through squeaky clean framing and color gradients, which holds Wednesday back from reaching some of the director’s earlier highs (Edward Scissorhands, Corpse Bride), but there’s an infectious fun to be had in seeing one of Hollywood’s most beloved visual storytellers return for a property he was made to helm.

There’s a lot to like in Wednesday, even if it doesn’t quite capture what makes the original stories so timeless. The show’s compact whodunnit-story keeps things entertaining and the script features plenty of biting wordplay for Ortega to chew on. It is its own thing, thoroughly constructed with its heart in the right place. It’s normally admirable for a reboot to stray away from simply regurgitating its predecessor, but the result is malnourished. Wednesday would surely approve.

The complete first season of Wednesday premieres on Netflix on November 23rd.

"Wednesday" is an entertaining, hilarious rendition on the "Addams Family" mythos, even if its descent into CW melodrama holds it back from capturing the spirit of the original series.