What is Paul Wight’s Future in AEW? 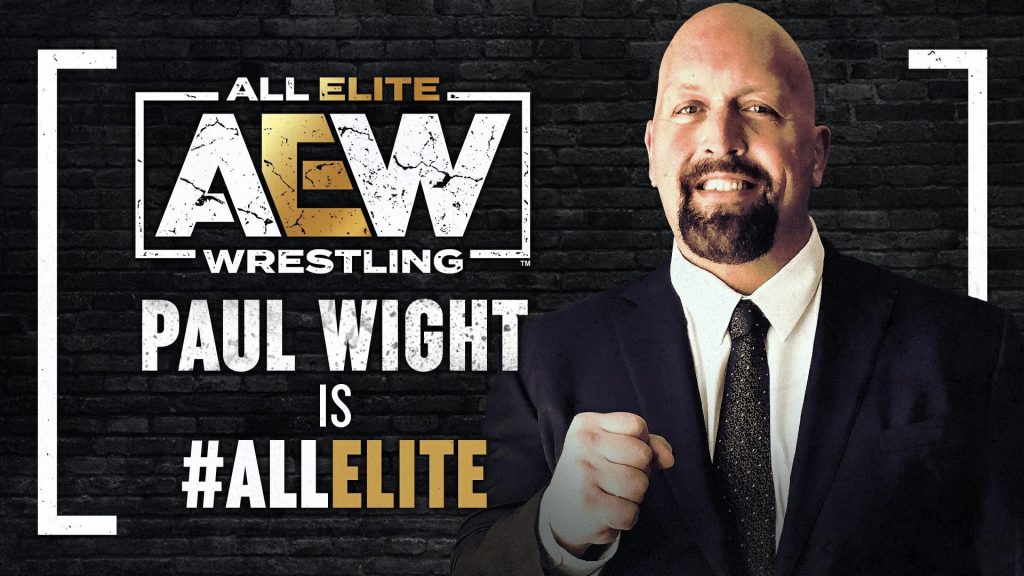 Billed as The World’s Largest Athlete in WWE, Paul Wight was known as The Big Show and was a longtime attraction in the company. Wight spent 20 years with Vince McMahon’s promotion and many fans believed he would eventually retire from the sport as a WWE Superstar.

But all of that changed when he signed with Tony Khan’s All Elite Wrestling. That signing was just the latest for AEW, which has amassed an impressive talent roster since 2019. So while fans speculate as to Wight’s future in AEW, the question is, what happens now?

The immediate word coming from AEW is that Paul will serve as a commentator for the company’s newest program. AEW Dark: Elevation will air every Monday on the company’s YouTube channel and promises to feature rising stars against established talents.

It’s a perfect role for Wight, who is one of the most professional and humble stars in the industry. He knows how to carry himself on camera and his personality will surely shine through every time he’s on the air.

It may be odd to see Wight in such a capacity, especially for fans who are expecting him to make an immediate in-ring impact. But the truth is that after 27 years in the business, Paul is likely ready to take a step back from action. But how far back is he actually stepping?

AEW’s press release announcing Wight’s signing included the fact that the giant would indeed be returning to the ring. Khan’s statement about that return was clear and straight to the point.

“He can benefit and guide our young talent with his mentorship, and his expert commentary on AEW Dark: Elevation will educate and entertain our fans, and also educate the younger wrestlers on the roster.  Furthermore, Paul enters AEW as a licensed wrestler, and he’s very much looking forward to studying our talent firsthand from the commentary desk in preparation for his return to the ring!”

So what does this mean for the future of AEW’s newest player/coach? Paul is joining a company that already includes some of the most respected veterans in the industry today. That list includes Dean Malenko, Jerry Lynn, Tully Blanchard, Jake Roberts, Dustin Rhodes and Arn Anderson. Each man is working behind the scenes to help in many capacities, which is making AEW’s foundation even stronger.

The addition of Paul Wight to the mix is yet another element that can only help the company. His years of experience, combined with his desire to give back to the business, will benefit AEW in the long run.

But then there’s Paul Wight the wrestler. The seven-foot star made his name in the ring working for both WCW and WWE. He earned his stripes along the way and earned respect as well. There’s no question in the minds of many fans that Wight is one of the best big men to ever lace up a pair of boots.

However, there is something of a stigma attached to the former Big Show. That’s due to the fact that while he worked for Vince McMahon, Wight was often rejected by the WWE faithful. Constant personality changes and bad booking were to blame for much of that reaction. It lead to a great number of fans losing interest in him altogether.

Big Show was a heel one minute and a babyface the next. This happened all the time and despite how good he was in either role, he would suddenly change with little to no warning. While fans understood that this was through no fault of his own, many of them turned on him anyway. But will they accept him now? Perhaps the answer hinges on who he faces in the ring.

Wight and Chris Jericho were a wildly popular tag team known as Jeri-Show in WWE. Chris currently has hands full with The Inner Circle in AEW. But it’s likely only a matter of time until he and Wight cross paths. Could the two men either reform their team, or perhaps wrestle each other at some point?

Paul has some unfinished business with Shaquille O’Neal. O’Neal is making his in-ring debut on the March 3 edition of Dynamite. WWE teased a match between the two men, but that match never happened. Assuming Shaq’s debut goes well, could he finally wrestle Wight in an AEW ring?

If Paul is indeed coming onboard primarily to give back to the business, then perhaps Luchasaurus is a good match for him. No one in AEW knows better how to get over as a big man in the ring better than Paul Wight. Working with Luchasaurus would undoubtedly be an invaluable learning experience.

The fact is that Paul Wight is 49 years old and his best days are likely behind him. He’s in phenomenal shape and he definitely has tremendous heart for the business, but will that be enough? Common sense says that he should receive a fair chance in AEW, despite what his critics might say. But will that be the case?

There’s no question that Paul Wight will make an impact despite who he faces, or what he does, in AEW. Whether or not the pro wrestling fanbase will give him a chance, remains to be seen.