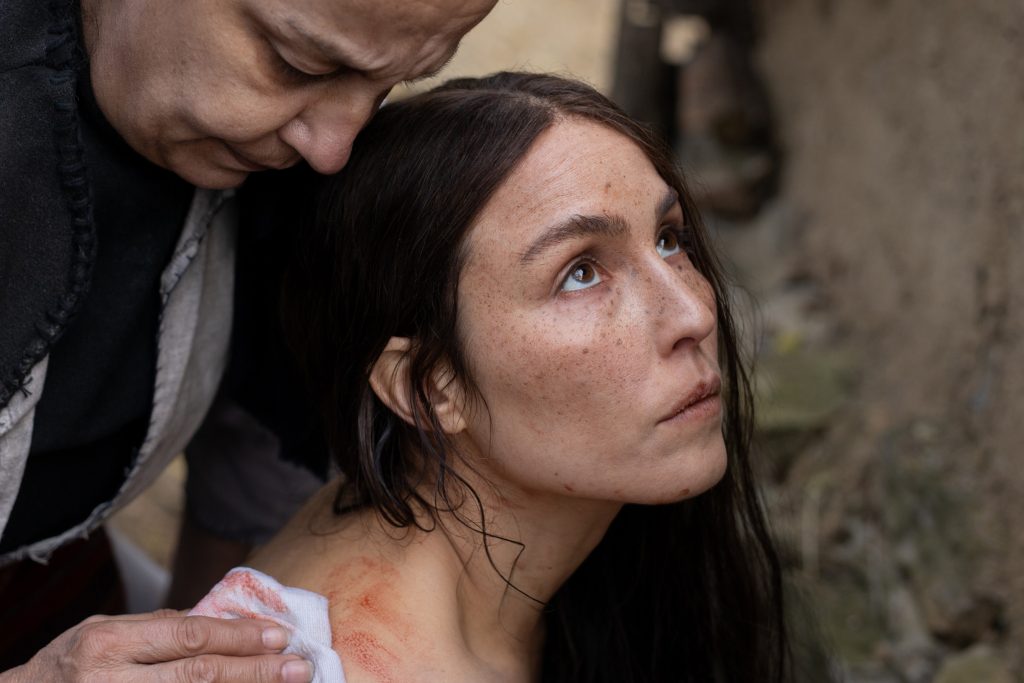 The foundation of any slice of folk horror worth its salt is a careful blend of devotion for and fear of the very landscape its narrative nestles within. For many, this manifests through the installation of a frightening “Other” that lurks in the untamed shadows of civilization. Drawing from folk tales dreamt up by terrified townsfolk, that “Other” often emerges as a variation on witchcraft, that prototypical horror interlaced with the early days of just about every culture. Witchcraft and witches have, therefore, remained a staple in folk horror cinema, giving us classics like Viy (1967) and modern masterpieces such as The VVitch (2015). Wading into this arena is Goran Stolevski’s You Won’t Be Alone (2022), a film that repurposes the conventional trappings of a witch tale in pursuit of a lyrical journey through human nature.

Set in 19th century Macedonia, You Won’t Be Alone opens on new mother Yoana (Kamka Tocinovski) and her baby girl Nevena as they are visited by Old Maid Maria (Anamaria Marinca), an ancient witch who has come to take the child. Yoana bargains with Maria who agrees to leave the child for now, but will come to get her on her 16th birthday. In hopes of outwitting the witch, Yoana hides her child in an isolated, rocky, and forgotten church, where she grows into a teenager (Sara Klimoska) having never stepped outside or met anyone but her mother. Unsurprisingly, Yoana fails to dupe Maria, who comes and collects the girl, finishing her transformation into a witch with the ability to take on the form of any dead human or animal. Stumbling into this power with wide-eyed innocence, Nevena cycles through a series of forms in and around the local village, hoping to understand this humanity she has never known.

I entered You Won’t Be Alone expecting an experience that hewed to the aforementioned witch movie precursors, but found instead a film far closer to something that would spring from Terrence Malick’s mind. Apart from the inherently supernatural premise of witchcraft, traditional horror elements give way to haunting but wickedly human drama. There is body horror galore in the witch’s transformation process, one that requires Maria or Nevena to stuff the guts from their chosen new form into a hole that opens in their chest. Yet, apart from those moments interspersed between Nevena’s array of metamorphoses, the experiences of her inhabitations center on what she learns of humans and society while masquerading as someone else. Even Maria, whose makeup causes her to resemble Freddy Kreuger with her burned and gnarled skin, is less a boogeyman than a rageful outcast, a feeling deepened when we finally learn her history. The result is a meditative lesson on dispelling one’s external genre expectations to meet the film where it is.

Stolevski’s writing and direction harmonize in their approach to examining the relationship between the earthen wild, embodied by Nevena, and the humanity of the village. Even before Nevena transforms, the dialogue seeds her relative wildness. Her mother refers to her as “my chick” and “my puppy,” explicitly drawing out attention to her animalistic tendencies. When she emerges from the cave-like church, her astonishment at the world around her allows Solevski’s camera to linger on the awe-inspiring beauties of the landscape. A repeated shot of Nevena framed from the waist up as a tiny center of the frame surrounded by some natural realm, be it massive trees, expansive rock, or a misty field dissipating to the sky, intimates both her wonderment and recognition of her smallness in contrast to nature. Elsewhere, Stolevski orchestrates his composition to entwine energetic stretches of handheld tracking with elliptical pillow shots of the Yazujiro Ozu variety. The filmmaking and storytelling rhythm that ponders the village life as much as its protagonist, inviting us to do the same.

From an acting standpoint, You Won’t Be Alone’s ensemble has the unenviable challenge of maintaining Nevena’s childlike credulousness across multiple performances. Klimoska turns in exceptional work to establish the baseline, portraying Nevena’s rawness as a general awkwardness in her own body. She walks stiltedly, cocks her head like an inquisitive bird, and imitates all that she sees out of sheer curiosity. As she passes through characters and bodies portrayed by Noomi Rapace, Carlotto Cotta, and Alice Englert, each new actor inflects her spirit with subtle revisions fitting the circumstances around them. Rapace is the first of the series, and so has the task of embodying Nevena’s initial brushes with the village. Her work reminded me of Kyle MacLachlan’s in Twin Peaks: The Return (2017) where he played the childlike version of Dale Cooper, Dougie Jones. Rapace morphs Nevena into a reflective surface for the humanity around her. As she tries to imitate how the women laugh, sweep, cook, and talk, it is never quite right, and so confronts the relative absurdity of convention.

There are times when You Won’t Be Alone dips into a recursiveness that somewhat breaks the spell it otherwise casts, but they are forgiven in relation to the genre-defying expressionism that characterizes the whole experience. Stolevski takes the traditional folk horror elements of an isolated village, a witch, an outsider, and haunting pastoralism and devises a gorgeous film that defies categorization. This is his first feature effort after a string of nine short films, and it is a truly auspicious debut that should have him join the conversation around young directors working to meld classical horror with their own modern approaches. Hopefully, You Won’t Be Alone is the first of many times I will have the chance to write about Goran Stolevski.

You Won’t Be Alone had its World Premiere in the World Dramatic Competition section of of Sundance Film Festival 2022.