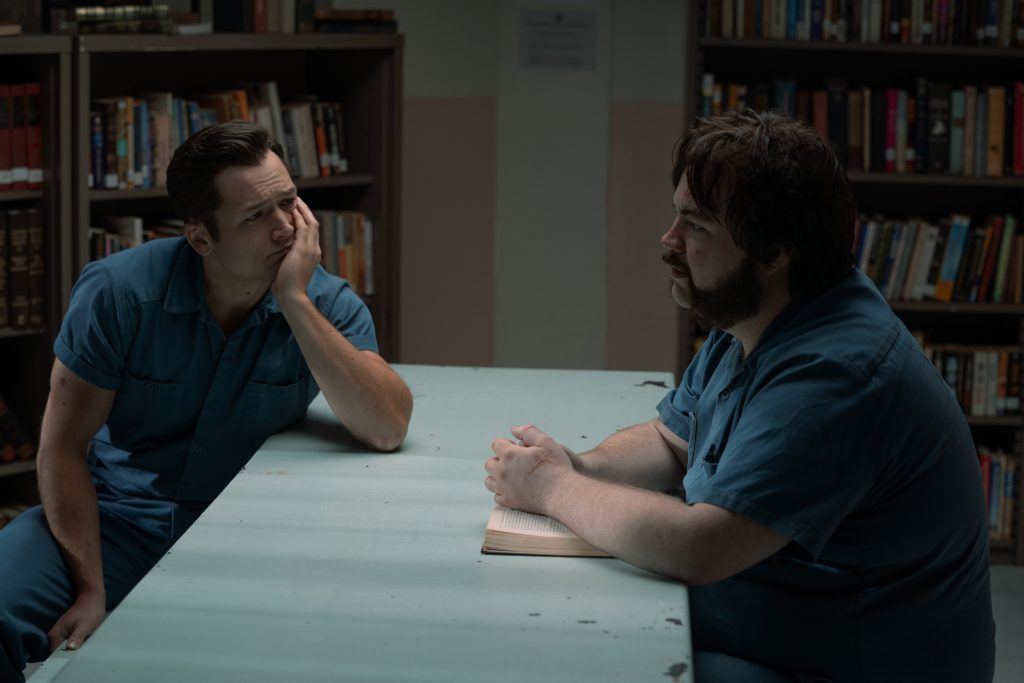 Plot Summary: After Jimmy Keene is sentenced to 10 years in a minimum-security prison without parole, he cuts a deal with the FBI to enter maximum-security prison for the criminally insane and befriend a suspected serial killer, Larry Hall (Paul Walter Hauser). Keene’s job is to elicit a confession from Hall in order to slam the door on Hall’s appeal and find the buried bodies of as many as eighteen women. But is Hall a serial killer? Or a serial confessor?

Outside of Ted Lasso, AppleTV+ has struggled to find content to capture the public imagination and embed itself firmly into the zeitgeist. Hell, I thought when I was reviewing The Shrink Next Door, “This is gonna be a much talked about limited series.” Seriously, a dark comedy-psychological thriller series with Will Ferrell and Paul Rudd seemed like a sure-fire recipe for buzz-worthy television. Then it was released to little fanfare, and it seemed to have little-to-no cultural impact despite being a very solid series. It currently has a very lukewarm 58% freshness rating on Rotten Tomatoes.

AppleTV+ is trying their hand at another psychological limited series with Black Bird, based on a real-life case. The show opens with a cheesy voice-over, which made me incredibly nervous about the rest of the series. Thankfully, despite this rocky start, Black Bird manages to be an unnerving journey into the heart of darkness. The major tension of the series is, did Larry Hall actually kill a number of women, or is he just someone craving attention? For the most part, I think this is a compelling thread that kept me invested throughout.

This push-and-pull of Larry’s innocence thankfully never wears too thin. This is thanks to the show presenting Jimmy with other things to contend with such as daily brutal violence from inmates and a corrupt prison guard. While yes, some of these side-plots do tend sideline the main narrative, I couldn’t help but be invested nonetheless. The writing is by no means perfect and if were being totally real, Black Bird has its share of clunky dialogue, tonally awkward moments, as well as falling back on some true-crime cliches. While I mentioned the show is engaging enough, I will admit that the pacing is something that could have used some fine tuning. Bluntly put, Black Bird didn’t need to be six episodes long.

The real secret sauce of this show is the cast. Before getting too far in, I feel it’s worth mentioning that there is a specter that haunts this entire show. Of course, this is because the legendary Ray Liotta died before it could be completed. Indeed, the actor did not look good in the series, and I wonder if his illness was written in. It adds an extra layer of sadness to the series which will no doubt be felt by many. Taron Egerton plays our main hero, Jimmy, who is tasked with acting as a sort of POV character. He also has to carry the bulk of the emotional weight, not to mention act as its anchor. Egerton does a fine job at bringing a complexity to the role, and really does get to show off a wide range of skills. I can see a nice arc from cocky criminal to someone with more emotional growth as a result of all the crazy things thrown his way.

But make no mistake, this is truly Paul Walter Hauser’s show. Black Bird is certainly an actor’s dream project, and the role of Larry Hall is a meaty one. Hauser fully commits to the role with a high falsetto voice and creepy demeanor. Hauser is talented enough to know the line between a wonderfully nuanced character study without ever going fully ham. If he doesn’t get at least an Emmy nomination, I would be shocked. Egerton and Hauser also play well off of one another, and the two seem to have an odd chemistry that works.

For me, Black Bird isn’t the greatest true-crime limited series. In fact, I would say outside of its performance by Hauser, this tends to be a pretty solid but predictable series. I truly feel it could have been shorter by at least an episode. This is a chilling bird that fails to fully take flight despite some strong acting.

Black Bird is available to stream in full on AppleTV+.