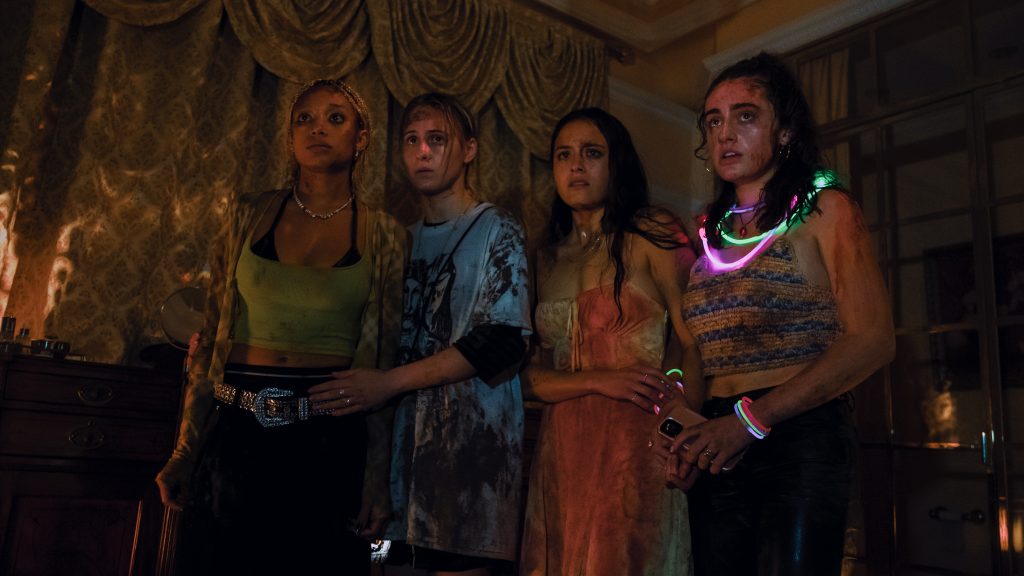 From the first few moments of Bodies Bodies Bodies, there’s a storm brewing. Not just literally, as the film is set against a torrential hurricane, but also very figuratively, which is actually far, far worse.

Sophie (the talented Amandla Stenberg) has brought her girlfriend, Bee (Maria Bakalova, proving her range post-Borat sequel), to a hurricane mansion party/all-night bender hosted by her childhood best friend, David (Pete Davidson, finally cast in a film role that makes great use of his talents). However, their arrival is far from welcoming, as both of them have apparently come unannounced.

Sophie’s friends are shocked to see her, having not heard from Sophie since a stint in rehab. Sophie insists she “messaged the group chat,” the first of many Gen Z euphemisms that help to establish a world of digital disconnect, but nobody seems to have gotten the memo. There’s an awkward air, loaded with resentment without so much as a word about it said.

Setup like a modern whodunnit, think Clue by way of Project X, each partygoer is entangled in each others’ lives in different but meaningful ways. Bee remains our surrogate character, a humble interloper forced to maneuver a minefield of unspoken drama and backhanded comments. Jordan (a high-strung and menacing Myha’la Herrold) insists to Bee that Sophie is “not who she seems.” What that’s supposed to mean, she doesn’t yet understand.

Rounding out the ensemble is David’s girlfriend, Emma (Chase Sui Wonders), the vapid and slightly ditzy Alice (MVP Rachel Sennott), and her two-week tinder beau Greg (the excellent Lee Pace), who is noticeably older than the rest of the attendees, causing more friction. The entire group is well-cast, with not a weak link in the bunch.

Things kick into high gear when Sophie suggests they play “Bodies Bodies Bodies,” a social deduction game along the lines of “Werewolf” or “Among Us”–one character is the killer, and the remaining participants must find out who the killer is as their fellow team members are taken out. Naturally, a game built on manipulation gets everyone’s blood boiling, until it begins to actually spill. Now there really is a killer, and they’re coming from inside the house.

It’s a brilliant twist on the slasher genre, originally conceived by Kristen Roupenian and expanded on by screenwriter Sarah DeLappe. Not only is it a simple concept executed extremely well, but it acts as a perfect extended metaphor for the film’s larger deconstruction of social paranoia in a digital age. In a game like “Bodies Bodies Bodies,” reality is disguised by a thin social agreement—after all, it’s just a game. But in a world where people communicate more through group chats and social media than face to face, reality is disguised completely. Nobody knows who to trust, and the results aren’t pretty.

Director Halina Reijn, in her English-language debut, and production designer April Lasky make several visual choices to further obstruct their characters. At one point in the film, the power goes out; their game is now lit by iPhone flashlights and glowsticks, tools of their own destructive nature. In an extended sequence, Bee is literally left out in the pouring rain, captured with surprisingly effective storm cinematography by camera operator Jasper Wolf. In his second A24 credit this year (the first being Marcel The Shell With Shoes On), composer Disasterpeace uses digital drones and pulsating electronic beats to imbue the film’s sound with as sinister of an effect as the technology has had on their lives.

As things escalate, the entire friend group wreaks traumatic havoc on each other, slicing open old wounds and dissecting each one’s fakeness under a microscope. With each piercing observation, every severed tie, it’s clear that an entire generation’s social language has degraded. Intimacy and honesty are outweighed by self-satisfied one-upmanship. When it is finally revealed who the killer is, it doesn’t even matter anymore–the damage has been done.

Reijn’s bitingly funny satire is certainly a comedic takedown of Gen Z trademarks, as its trailers promised, but it is that and more. Fans hankering for a juicy slasher thriller will be satisfied by the film’s frenetic cinematography and curdling suspense, but the film’s acute observations are so deeply attached to the material that film lovers looking for something deeper will see it unfold with ease. It’s abundantly clear over the course of its gloriously tight 95 minute runtime that Bodies Bodies Bodies fits perfectly into A24’s healthy library of aesthetically and thematically complex indie darlings.

Halina Reijn's multi-faceted, thematically loaded slasher comedy speaks to the current moment with a fiercer voice than any other film this year.