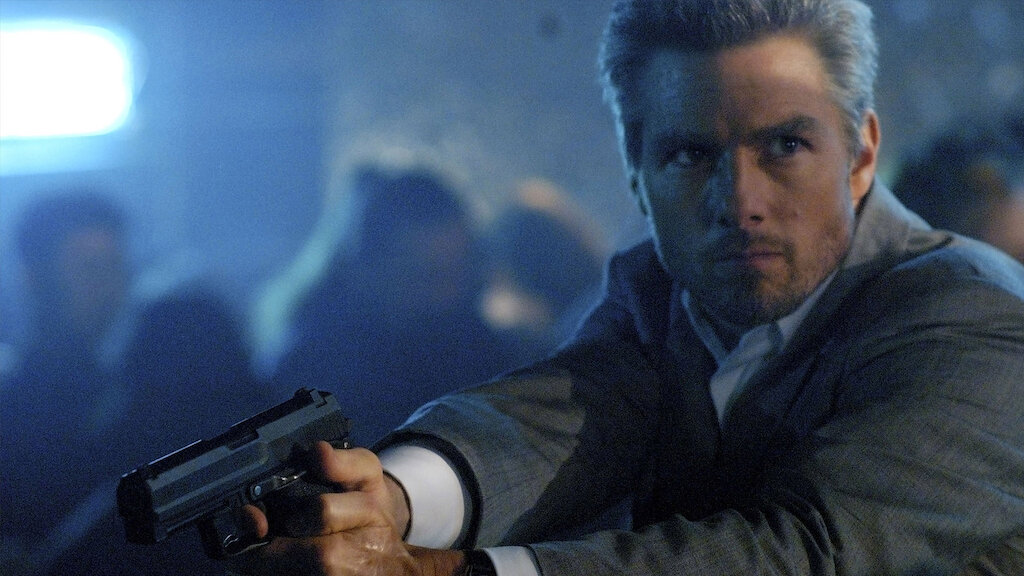 Back in the year 2004, it was a really good time to be Tom Cruise. The iconic movie star was arguably at the height of his powers, coming off a string of critically-acclaimed hits including Minority Report and The Last Samurai. This was the year before he would face the biggest stumbling block of his career – the infamous couch-jumping moment while he was out promoting War of the Worlds. Before he would be hindered by that unfortunate blunder, he would make the fascinating decision to take one of his rare villainous roles alongside Jamie Foxx in the Michael Mann thriller Collateral. This combination of talent delivered one of the most exciting films to come out of the early 2000s. The film earned Foxx an Academy Award nomination for Best Supporting Actor – he lost, but I am sure Foxx was comforted by his Best Actor win for Ray the same year. Even with vast critical acclaim and a very impressive box office haul, the film feels criminally underrated. With the new 4K UHD release from Paramount, it is the perfect time to remind everyone how hard this film goes.

Jamie Foxx plays Max, a Los Angeles cab driver who is very particular with nearly everything in his life. Max prides himself in being very organized both in the practical sense and in the mental sense – he has a plan to own his own limousine company and he is going to scrape every penny together to do so. His latest fare offers an unexpected moment of joy when he meets Annie (Jada Pinkett Smith), a federal prosecutor with whom he engages in playful banter over traffic patterns. Annie is overwhelmed by a key case she is set to prosecute, but Max makes a strong impression on her when he expertly brings a semblance of calm to her life while showcasing his trademark charm. The chemistry between the two is palpable, and it is key to establishing emotional stakes in the film early. But this is not a romantic comedy, and Max is about to embark on a very different kind of night when he picks up his next fare, Vincent (Tom Cruise). Cruise is in rare form decked out with steely silver hair and a perfectly put-together suit for a man who means business.

Unbeknownst to Max, Vincent is a hitman in town to take out five targets that certain parties really need to be six feet under. Vincent needs reliable transportation throughout this very important night, and he coaxes a very reluctant Max to bend the rules and be his personal driver for the night under the guise of brokering a real estate deal. Max gets clued in really quickly once a body lands on his cab during the first stop, and the movie does not really let up from this moment. Cruise and Foxx play off each other beautifully with one performance feeding into the other. As Max begins to have a borderline breakdown over what he has been drawn into, Vincent seems to grow more manic and emboldened in his mission. Cruise plays with unhinged malevolence in such a fulfilling way that you wish he would dip his toe into the arena that much more. The cat-and-mouse tension grows more and more unbearable with each stop along the way. You get very little in the way of backstory for Vincent, which makes him all the more unpredictable. Some of the best moments of the film are when Cruise lures you in with his charisma and you begin to let your guard down, only to be reminded of his killer nature in a most spectacular fashion.

Not only are our two leads incredibly dynamic, but the rest of the ensemble is composed of some real heavy-hitters. The previously-discussed Jada Pinkett Smith showcases a lot about her character in a compressed amount of time. Mark Ruffalo shows up as a narcotics detective who hopes to bring down Vincent before he takes out everyone on his case. Ruffalo has always been great, and he makes the most of his performance here. Even Javier Bardem pops up in a brief but memorable role that keeps you glued to the screen. The cast takes the movie a long way towards being great, but proper credit should be given to director Michael Mann for bringing everything together in such a masterful way. Mann was pushing boundaries when it came to using digital cameras during this production, and the gritty cinematography is one of the standout aspects of the film. This is a movie that does not waste any time including extraneous scenes. This is a propulsive ride from beginning to end that deserves to be recognized as one of the great films of the early 2000s. 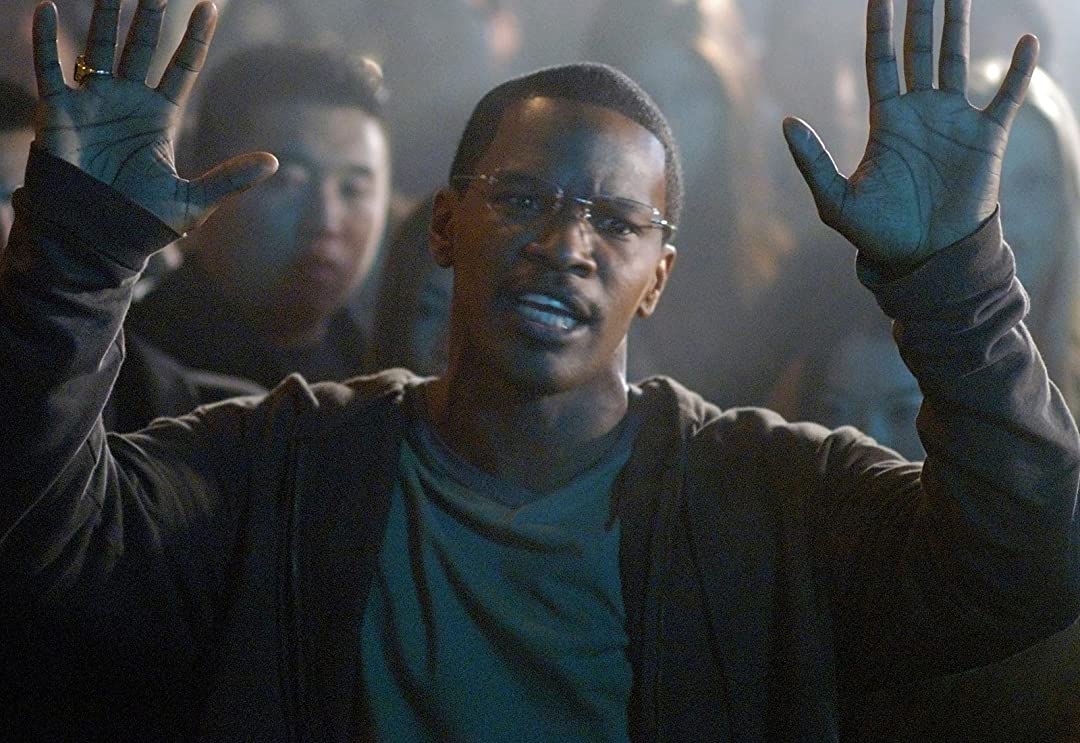 Collateral improves on its decent looking Blu-Ray with a gorgeous 4K UHD Blu-Ray upgrade. Mann blended film with digital photography to construct the intentionally gritty look of this presentation. This is not a film that is intended to wow in 4K in the traditional sense, but this disc offers upgrades in nearly every respect to provide the ultimate presentation. The aesthetic that Mann created for Collateral is not compromised in this presentation as the transfer handles grain and noise more organically. Whereas the previous Blu-Ray suffered from clumpier grain, this 4K presentation maintains this texture more efficiently and evenly. The clarity and detail present is greatly improved, exposing details previously lost due to the limitations of the format.

Everything looks more natural from the skin tones to the colors of the clothing and the urban landscape. The shadow gradients look so much more natural than the old Blu-Ray presentation. A great amount of depth is gained with this transfer, both in close-up and long shots. The Dolby Vision really shines in the way it increases the depth of the black levels. All of the varying shades within the shadows are handled deftly in this very dark film. Instances of intense whites never give way to blooming or other unsightly occurrences. This 4K UHD transfer brings richness to the movie that you did not know you were lacking until you see it for yourself. The disc is mostly free of compression artifacts and other digital nuisances. This might not be the first disc you pull out to show off your new 4K TV to the common person, but this is a stellar presentation from Paramount that maintains the integrity of the film really well.

This 4K UHD Blu-Ray comes with a lossless DTS-HD 5.1 Master Audio track that makes the film extra thrilling. Collateral has a lot of great atmospheric effects that engage the surround speakers including location-specific sounds such as a busy train station, traffic noises from the long night’s journey, club music and much more. Dialogue comes through clear in the front channel without being overwhelmed by any sound effects or score. The track has a good sense of directionality with sounds always coming from the appropriate channels. The movie is filled with some thrilling moments of action, which puts the low end to work quite often. The James Newton Howard score provides the perfect atmosphere for this tension-filled night, which flows through the speakers well. There are no issues with fidelity or damage to the track. This audio presentation is pretty fantastic even without an upgraded audio mix to go along with the video upgrade. 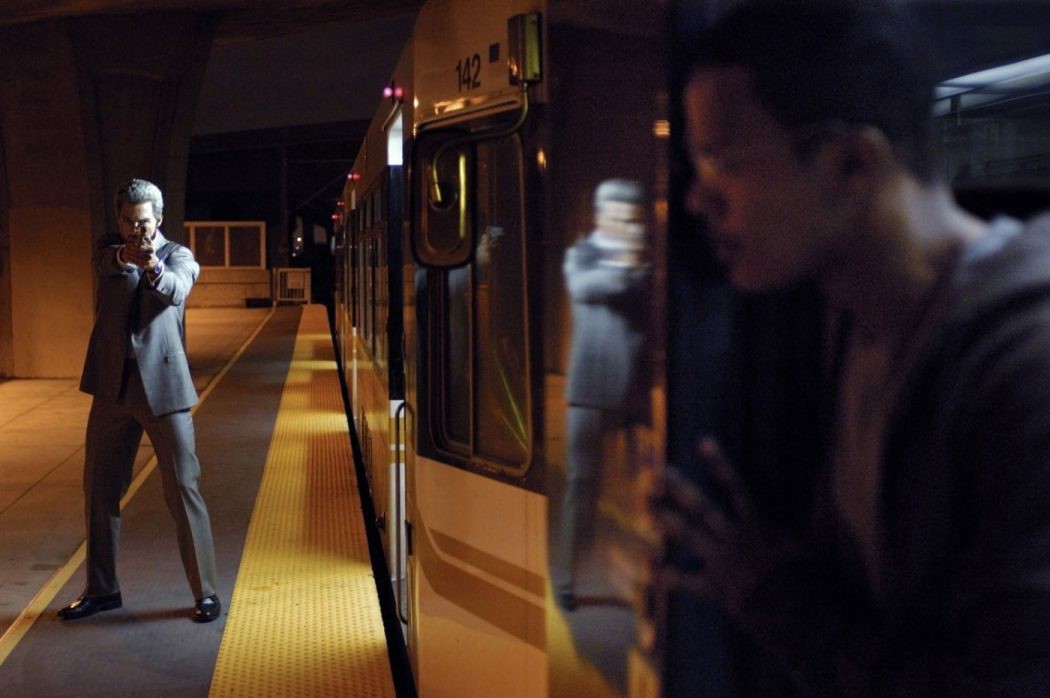 Collateral represents a thrilling change of pace for the always-engaging Tom Cruise as he takes to villainy like a fish to water. The film itself is impeccably shot and paced by an at-his-best Michael Mann. All of the elements of this film are working together in perfect harmony to create something truly thrilling and underrated. Paramount Home Entertainment has provided a 4K UHD Blu-Ray that offers a strong upgrade in the A/V department along with all of the legacy extras. It always baffles me as to why this is not discussed as one of the great thrillers of the 2000s. Be sure to pick this one up to judge for yourself. Highly Recommended

Collateral is currently available to purchase on 4K UHD Blu-Ray and Digital.