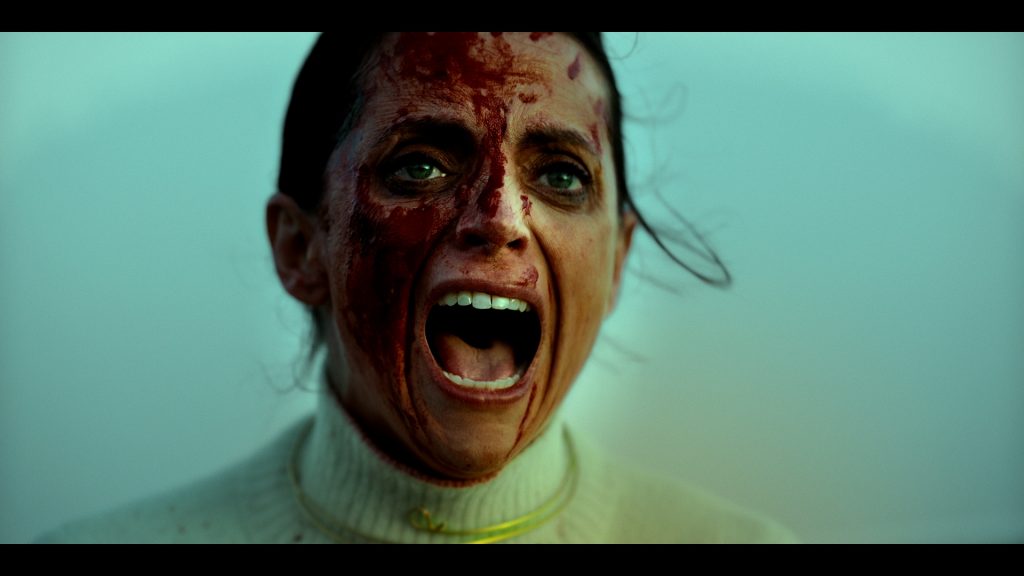 If you were to write a recipe for writer-director David Hebrero’s Everyone Will Burn (2022), it would go something like this. Get out of a big mixing bowl, pour in a heaping foundation of telenovela, and don’t you dare skimp. Next, slide in a hunk of apocalyptic folk horror and knead the two together until they’re one glistening mass. Make a pocket and season with rounded spoonfuls of social satire and extremist Catholicism, give the whole thing one more mix, and bake until golden brown. If you have followed the steps religiously, as Hebrero clearly has, you should end up with a gorgeously rendered vision of a small Spanish town gone stark raving mad and filled to the brim with deranged residents.

Everyone Will Burn opens on María José (Macarena Gómez), an isolated divorcee still grieving her son Lolo’s death years before. She is moments away from stepping off a bridge to her death when young girl Lucía (Sofía García) appears covered in dirt and calling her “Mom.” A confused María José nonetheless jumps into maternal action and takes the girl with her. Almost immediately, María José discovers that Lucía is not just any young girl, but a darkly powerful being with connections to the supernatural. Her neighbors notice too. They wonder if Lucía might in fact connect to a decades-old prophecy about a child and the end of the world. As María José and Lucía grow more defensive and the body count starts to climb, the town descends further into mania barreling toward a devastating face-off.

The best way to describe Hebrero’s aesthetic style, one captured vividly by DP Ona Isart, is a refraction of Addams Family Values (1993) through gothic folk horror. The colors are rich and saturated, but faded just enough to give them the patina often reminiscent of an out-of-date postcard. Hebrero layers that on a proclivity for severe camera angles and lovely frames within frames. Take an early scene when María José visits the local church, seeking guidance after first finding Lucía. Hebrero places the camera high and in the back of the church, lending a deity-like viewpoint. He frames María José in the doorway, backed by an unreal turquoise light that spills beyond her into the darkened house of worship. The collection of creative choices lend the sequence a beauty and severity mismatched wonderfully with the proceedings histrionic tone.

A game cast manages and maintains that tone, fluctuating their performances to coordinate with the swings back and forth from melodrama, to dark comedy, to horror. The key performances here come from Gómez and García. Gómez chews every square inch of scenery as María José spirals. She expresses a mother’s grief with a searing intensity, but can just as easily fling her eyes wide with a menacing smile and turn on the hyperbolic tone of a soap opera killer. García is a touch more understated playing a knowing riff on the demonic child trope (eat your heart out, Damien). She makes a meal of each heel turn, mastering the fiendish grin and lowered eyelid combo, and leans into the absurdity of the beats when she is pretending to be a normal kid. Together, the two also manage a tender bond that emotionally grounds the fantastic proceedings.

Where Everyone Will Burn falters a touch is in the screenplay, which Hebrero co-wrote with Javier Kiran. While the writers do strike an enviable balance of tones, the whole thing goes on long enough to slightly wear out its welcome. There are a handful more scenes of Lucía punishing townsfolk than we need to get the point, and the second act, when Lucía and María José sort out their dynamic could easily be tightened to lose five or ten minutes. The casts tongue-in-cheek performances and Hebrero’s significant visual flair gloss over most of patches that drag, but it’s hard to argue that Everyone Will Burn would not have benefited from another revision to consolidate the story beats into a crisper progression. Quirks and asides are fun for awhile, but here they often obscure the key foundational elements.

All told, Everyone Will Burn is a deliciously distorted enactment of the ways that small town histories and resentments can doom everyone who shares a part in them. You hardly need a demon child and dead kids to make that point, but Hebrero uses those heightened elements to great effect in blowing hysteria and festering grudges out to their exaggerated ends. Everyone Will Burn may not hit every note right on key, but it succeeds at assembling a damn, and damned, good time.

Everyone Will Burn had its North American premiere in the Official Selection section of Fantastic Fest 2022.

Everyone Will Burn may not hit every note right on key, but it succeeds at assembling a damn, and damned, good time.