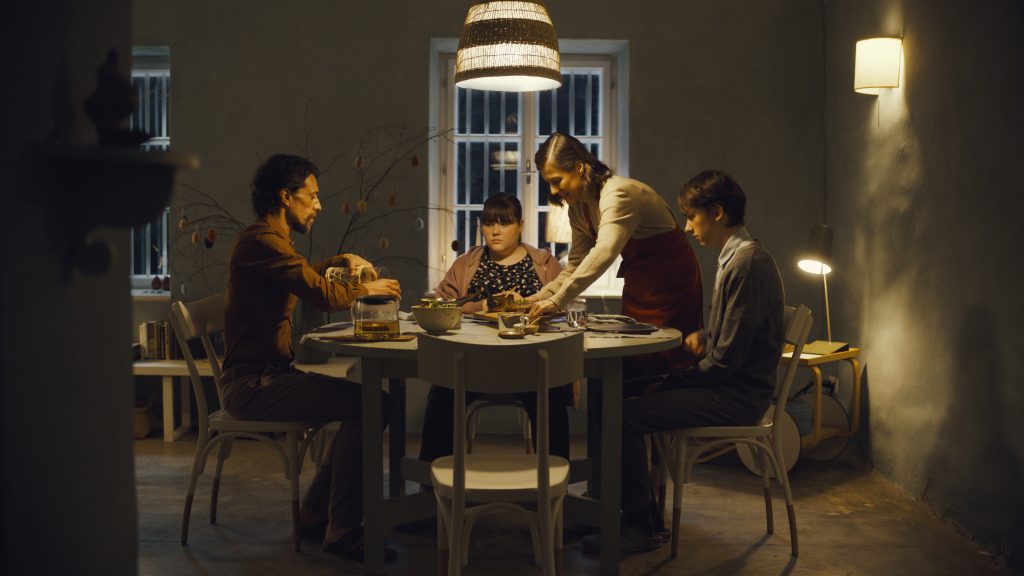 Slow-burn horror is all the rage these days. Combining the minutiae of arthouse filmmaking with the provocative tenets of horror, it’s an exercise in creating effective atmosphere. The patience and prestige of the slow-burn has brought horror into a modern renaissance, but building tension like this is only part of the formula. There needs to be characters and themes that inform the unease.

This is what separates visionary auteurs like Ari Aster and Robert Eggers from, say, Peter Hengl, whose debut feature, Family Dinner, premiered at the 2022 Tribeca Film Festival this week. Right from the first long take, Hengl’s directorial skills are on full display. But as everything unfolds, you start to wonder when this so-called dinner will finally get to the main course. Arguably, it never does.

Hengl immediately lays out an interesting set of character dynamics. Simi (newcomer Nina Katlein) is a quiet, plus-sized 15-year-old girl who is insecure about her weight. When she decides to spend Easter holiday with her renowned culinary health guru aunt Claudia (accomplished Austrian actress Pia Hierzegger), Simi hopes Claudia can help her shed some pounds. But the dietary demands become extreme, and Simi is shocked to learn of her aunt’s unorthodox methods.

Claudia’s second husband Stefan (Michael Pink, giving the film’s most compelling performance) does not fully believe in his wife’s methods. Nevertheless, he is utterly devoted to her. Finally, there’s Claudia’s son Fillip (Alexander Sladek), who becomes immediately aggressive toward Simi. His reasoning is initially unclear…and by the end, it still feels somewhat murky. It’s a microcosm of the problem pervading Hengl’s film––there are many interesting ingredients in the mix, but they all feel half-baked.

Character motivations feel simplistic to the point of making little sense. Claudia’s answer to Simi’s weight gain is to starve her, as Claudia does for herself and her husband. However, when her real intention becomes clear in a scene that comes surprisingly early with little aftermath, it’s unclear as to how her starvation methods benefit her end goal. It’s also, frankly, unclear how the film’s horror twist further explores Claudia’s obsessions. Why even is Claudia a health guru? How did she come to discover or appreciate her newfound, twisted desire? None of these questions are answered, at least not in a way that leaves the viewer’s stomach full.

Returning to Fillip, his motivations are similarly confusing. He is extremely rude to Simi at the earliest opportunities, calling her a “fat cow.” When Simi becomes Claudia’s newest pupil, the hate intensifies…but again, where did it start from? Does Fillip resent her for being fat? There isn’t any indication that Fillip cares much about his body, nor body image in general. Is there a psychosexual element to it? Not particularly––leave that to Stefan, another character dynamic that goes unfulfilled.

Things are even more confounding when Simi and Fillip begin to see eye-to-eye, even conspiring to escape together. It’s a relationship that never feels grounded in the text, and the two young leads have very little chemistry. Katlein does well in scenes by herself, but her physical presence with dialogue is a bit stiff. Sladek has better presence, but not against Katlein as a scene partner.

The worst part about all of this is that Hengl knows how to craft a cohesive visual identity. Deep grays, blues, and greens in the color palette keep the world at a distance. Heavily contrasted lighting makes night scenes palpably spooky. Well blocked long takes give us time to live and breathe in the Austrian countryside. The film is even darkly funny at moments, suggesting the film is playing with elements of farce. It’s unclear how much of it is intentional, but there are a few choice moments ribbing diet culture.

There isn’t much beyond that, though. As the story progresses, it really has less and less to do with body image and more to do with ritual, as many horror films of this kind tend to include. After all, it is Easter holiday. However, unlike the films of Ari Aster, where every religious detail in the world-building is meticulous, Hengl’s conception of the family’s faith is fairly surface level. It comes off as derivative, only giving the horror deeper meaning by association.

Family Dinner ends with a wholly unearned thrill ride of a final sequence, before which the previously-revealed twist is now doubly confirmed. It’s a finale that is far too satisfying for a film that is anything but. Family Dinner’s horror conceit is too derivative for hardcore genre fans and not palpable enough to scare casual viewers. It says little about the culture this movie is supposedly commenting on, while minimally scratching beneath the surface of its own narrative possibility. Hengl has an eye for modern horror, but the writing simply doesn’t match up. Check, please.

Family Dinner had its World Premiere in the Midnight section of the 2022 Tribeca Film Festival.