‘Fantastic Beasts: The Secrets Of Dumbledore’ Review: Third Installment Is An Improvement, But Still Feels Convoluted

The Fantastic Beasts franchise has always occupied an odd space in the Harry Potter fandom. On the one hand, the films are full of the magic and thrills that made its parent series great, but on the other, its devoid of the heart and character growth that kept us coming back film after film with the original series. The mothership enthralled people from all over the world and sparked the imaginations of an entire generation.

The Fantastic Beasts franchise always had big shoes to fill, and although The Secrets of Dumbledore is a step in the right direction when it comes to capturing some of the heart of the former series, it still hasn’t hit the mark.

In this sequel to 2018’s The Crimes of Grindelwald, our protagonist Newt Scamander, and his various allies continue to battle against the nefarious forces of Gellert Grindelwald under the guidance of Professor Dumbledore. The film opens with Grindelwald’s followers stealing a rare creature with the psychic ability to see the future and to identify those with purest of hearts. Grindelwald plans on using the creature’s psychic powers to not only anticipate the moves of Professor Dumbledore and his allies, but to prove himself worthy of becoming the next Supreme Mugwump (Head of the International Confederacy of Wizards).

Newt and his allies, each with their own special task, band together to expose Grindelwald’s devious plans and prevent the brewing war between the magical and non-magical worlds.

The astoundingly talented Eddie Redmayne returns as our hero, Newt Scamander. As always, Redmayne portrays Newt as a shy, but dedicated man who believes in fighting for what’s right. He remains devoted to the magical creatures that inhabit his world and is steadfast in seeing good triumph over evil.

Jude Law returns as a young and extremely conflicted Albus Dumbledore. Dumbledore’s love for his foe is present, but he knows he must defeat Grindelwald  for the sake of the world. First, he must figure out how to destroy the magical blood pact that prevents he and Grindelwald from confronting each other.

Theseus Scamander, played by Callum Turner, is back and out for revenge after the death of his fiancé, Leta, at the end of the previous film. Dan Fogler returns as our favorite no-maj, Jacob Kowalski, who dreams of the day he can reunite with his lost love, Queenie Goldstein (Alison Sudol). Meanwhile, Queenie is serving as Grindelwald’s personal mind-reader, but has her doubts about his cause.

Ezra Miller continues to portray Credence Barebone with a combination of angst, longing, and barely contained rage. Credence is out for revenge against the Dumbledore family now that he knows he was abandoned.

We also get some new additions this time around, such as Jessica Williams as Professor Lally Hicks, whose proficiency for Charms proves to be invaluable during the film. Richard Coyle as Dumbledore’s ornery brother, Aberforth, who has his own secrets that come back to haunt the Dumbledore family during the film; and finally, Mads Mikkelsen steps into the role of Gellert Grindelwald.

There’s a lot going on in this movie. While it’s a step in the right direction writing wise, which I suspect has a lot to do with screenwriter, Steve Kloves, returning to co-write the screenplay with Wizarding World creator, J.K. Rowling, this one has so many moving pieces that it can almost be overwhelming at times.

I enjoyed the political thriller aspect of the film surrounding the election for the next Supreme Mugwump. It deepens viewers understanding of the Wizarding World and it makes sense that after being cleared of all criminal charges, Grindelwald would try to obtain this position of tremendous power. Mikkelsen slips into the role of Grindelwald with ease,  and brings a deadly and seductive charm to the role. His chemistry with Law is palpable and the scenes between the two are astounding.

Jessica Williams shines as Lally Hicks as well. Her charm, swagger, and dry humor are refreshing additions to this wide cast of characters. Richard Coyle brings much to the table as a resentful and perpetually annoyed, Aberforth. There’s a particular twist with him and another character that I should have seen coming, but didn’t. It should have been obvious.

One complaint I have is the lack of grief we get from Newt and Theseus over the death of Leta at the end of the previous film. Yes, Theseus is still upset and out revenge, but it’s stated so late in the film that it feels like the filmmakers realized they should shoehorn it in to remind viewers his stake in all of this. We should have gotten that reminder during his reintroduction. The relationship between the brothers continues  awkward, when one would think Leta’s death would bring them closer together. Again, the Fantastic Beasts films continue to rob us of those pivotal emotional moments that made the Harry Potter series so great.

Without spoiling too much, we’re also robbed of further development of the Newt and Tina relationship. She’s suppose to be the love of his life, and three films into the five film franchise, I don’t buy it. Watching an epic romance blossom between these two could have easily been one of the emotional cores of this entire franchise, but alas, it has only been a missed opportunity thus far.

An important theme of the Harry Potter universe is family. The ones formed by blood and the ones formed by circumstances. As a sort of echo to my issue about the odd relationship between Newt and Theseus, I found myself frustrated with the lack of interaction between the Goldstein sisters as well. We’re told in the first film that Tina and Queenie lost their parents and only have each other. Seeing them interact, or seeing Queenie’s longing to reunite with her sister, would have been nice. The film has an opportunity to do this and completely ignores the emotional significance and weight such a moment would have. It seems nonsensical not to include it, but alas.

While this film will be enjoyable to fans and non-Potter fans alike, the lack of core emotional moments and a convoluted plot has me worried about future installments of the franchise, and whether or not they’ll come to fruition.

Fantastic Beasts: The Secrets of Dumbledore is currently in theaters from Warner Bros. 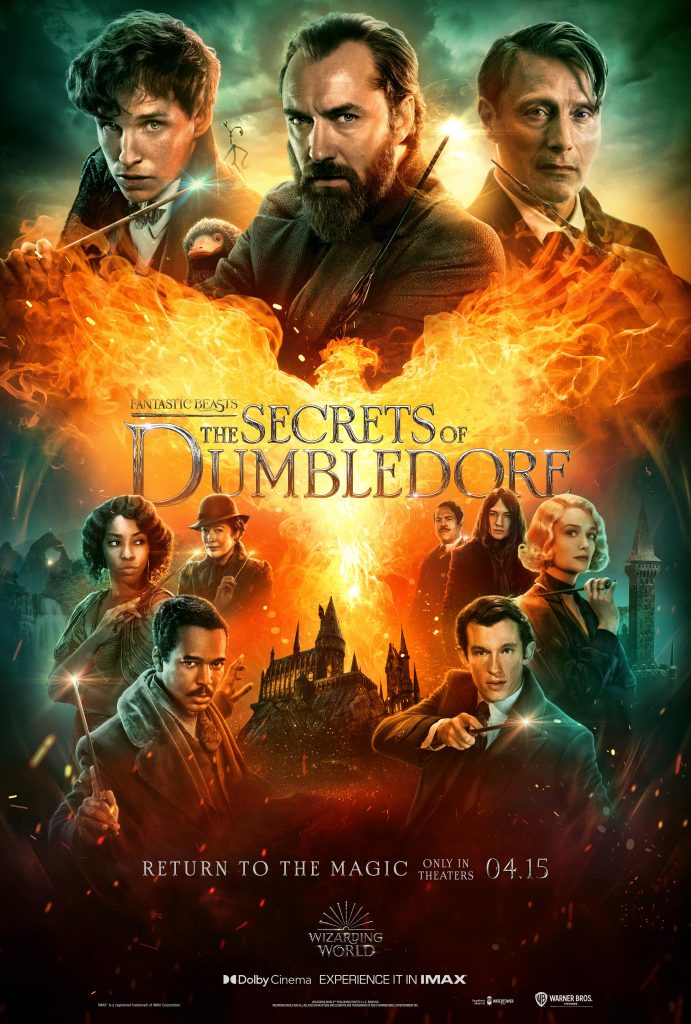