Games With The Biggest Open Worlds 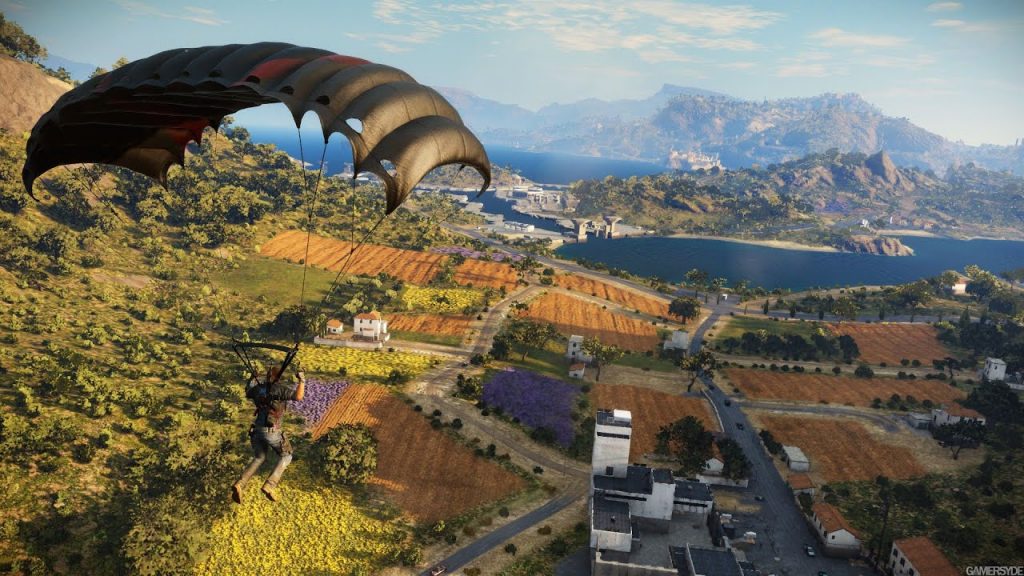 In the world of video games, with great technology comes greater maps. As open-world games gained in popularity and sophistication, developers strived to increase map sizes. The biggest virtual sandboxes are hundreds of miles in size. But are they as entertaining as they are big?

Here’s our list of games with the biggest open worlds. Do note that we won’t be considering procedurally-generated maps or cosmic landscapes, ruling out games like No Man’s Sky and Spore. The list is also in ascending order, so keep scrolling to see the big maps get even bigger.

If taking a trip down memory lane is a fun thing for you (since most of these games are pretty old), you can find some of these games still alive on Steam, so make sure to get some Steam Wallet Codes! 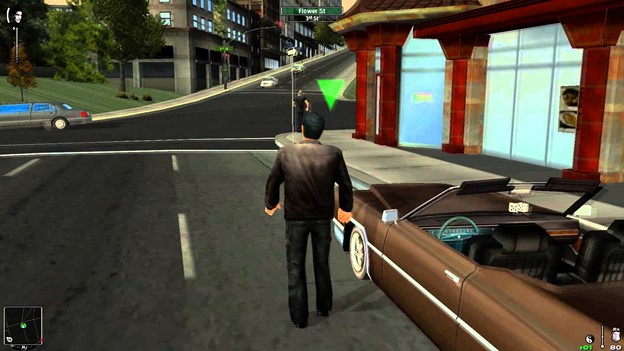 This 2003 open-world action-adventure game came out with a map five times larger than its obvious inspiration: the Grand Theft Auto series. The 240-square-mile world was modeled after Los Angeles. It included large areas of Beverly Hills and Santa Monica, and the street names and highways were all recreated with high accuracy.

However, aside from aimlessly driving from one real-world LA landmark to another, there was not a lot to do in the vast open world. While there was always a place to go, the linear story which was told in episodes didn’t allow for a lot of exploration. The world was also devoid of several varied side-activities. For a game that soon turns 20 though, True Crime: Street of LA sure packed a punch in terms of game size. 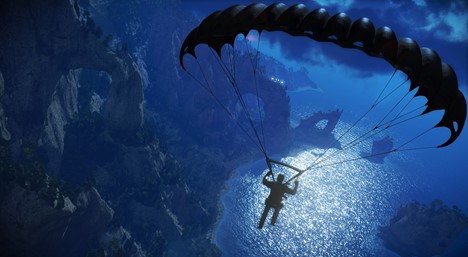 The third installment in the adrenaline-fueled action game series takes you to Medici — a fictional Mediterranean island spread across 400 square miles. Just like its predecessors, the setting for Just Cause 3 features bright colors, with crystal blue waters, lush green trees, and sparkling beaches.

While the map was similar in size to Just Cause 2‘s, developers Avalanche added ‘volumetric terrain’ to Medici. With added verticality, protagonist Rico could dive into subterranean caverns as well as scale skyscrapers and towering structures. As a result, the world never seemed flat in both structure as well as content. Allowing the players to take in the vistas via a parachute was also a masterstroke.

The size of the map was the same, but the density of Just Cause 3‘s world was more than ever, resulting in the perfect playground for death-defying stunts. 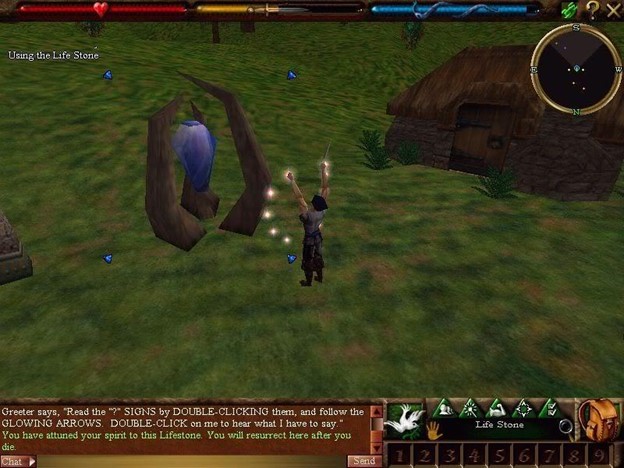 What set this 1999 MMORPG apart from others was that there were no ‘zones’, on the surface of Asheron’s Call‘s huge world which meant that the players could travel without invisible barriers or loading screens. Anything you could see in the distance was basically reachable!

Set across 500 square miles on the island continent of Dereth and other smaller islands on the fictional planet of Auberean, Asheron’s Call could host thousands of players on the same map. The other feature of the big map was the realistic environment. The climate and its effects changed depending on your location. There were various biomes to explore like the swamps, mountains, forests, wastelands, dungeons, and deserts. The 3D graphics were also extremely detailed for the time.

Servers of the game were shut down in 2017 but hardcore adventurers have kept the Asheron’s Call game alive via emulation. 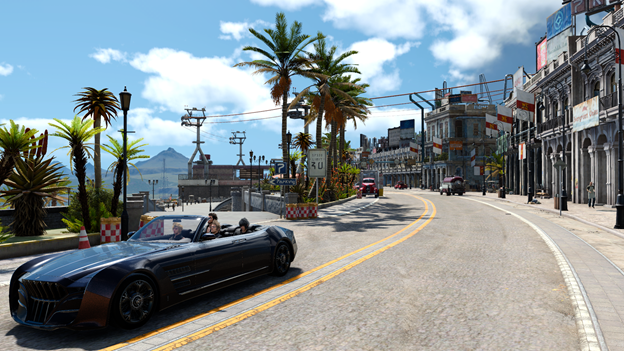 Final Fantasy XV was first revealed as “a fantasy based on reality,” and for good reason. The game features a map as big as the US state of Rhode Island, and all of the areas are connected! Realistically, the player could walk across the entire world. Thank God the party has a beautiful car called ‘Regalia’. The characters could also ride giant birds called ‘chocobos’ across the kingdom of Lucis.

Not only that but several towns were directly inspired by real-life locations. There were towns based on Shinjuku in Japan, Havana in Cuba, and Venice in Italy. But while realism was the driving force, the classic dungeons and monsters from the Final Fantasy series were present throughout.

The beautiful, giant landmass made for some scenic road trips for the four dudes and their car. 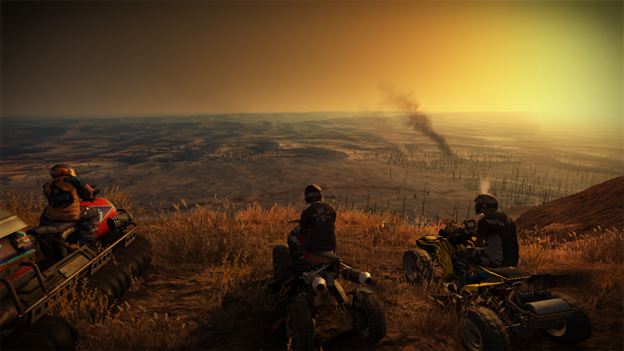 Yes, we have lumped together all the racing games for the sake of brevity and variety. There’s another common thread that ties these three titles together. When each one was released, the huge map size was a talking point. And each one presents its world with a twist.

Test Drive Unlimited 2‘s map was modeled after the beautiful islands of Ibiza in Spain and Oahu in the Hawaiian Islands. The islands are dense and packed with both asphalt roads as well as off-road paths, with the total length of roads at around 1,900 miles.

If you want to drive across the USA, The Crew is your game. The online racing game recreates the entirety of the continental US. And while the world map is scaled down, it would still take you about 45 minutes in real-time to drive from one coast to another. And though scaled-down, you could speed through major cities in all their glory.

Fuel meanwhile is a post-apocalyptic open-world racing game with a Mad Max vibe to it. It boasts of a massive, 5,560 square miles map (the size of the US state of Connecticut). But Fuel crumbles under the weight of its own promise. Fuel’s environment is a gigantic wasteland struck by natural disasters. The result is a beautiful, but boring, world. There’s not a lot to see, and while you can unlock new rides and accessories by driving around, it gets tiresome with mountains and other structures acting as obstacles for you to drive around. 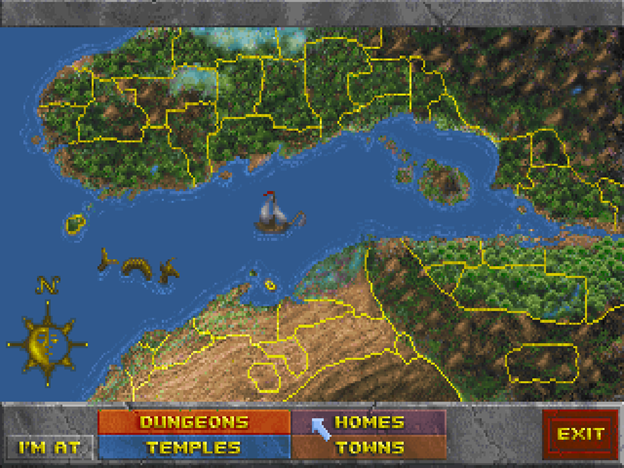 Roughly the size of the US state of Florida. Larger than the country of England. The second entry in the Elder Scrolls series features an insane map with a size of 62,000 square miles.

The Elder Scrolls series has always been known for giving their players a sandbox for adventures of epic proportions. However, Daggerfall remains the biggest sandbox yet. While a portion of it is procedurally generated, it still makes the cut because of the hand-crafted provinces of High Rock and Hammerfell, on the fictional continent of Tamriel. Littered with 15,000 towns and a population of 750,000, the map of The Elder Scrolls II: Daggerfall provided years worth of exploration.

While a technological achievement for its time, the large size also made for vast chunks of flat desert terrain and several bugs. Players thus often zipped past most landmass via fast travel instead.

The games on this list are technical marvels. They are also the results of a lot of love and a lot more ambition. While all of them made headlines due to the large map size, only some managed to succeed on the expectations and actually made their wide worlds worthwhile. Others fell into the trap of gimmickifying their games, with a focus more on spreading the square miles instead of giving gamers enough reason to explore.

So, what do you think of these games? What’s your favorite open world to explore to date? Let us know in the comments below. Make sure to check out the titles if they caught your fancy, but do remember: bigger isn’t always better!