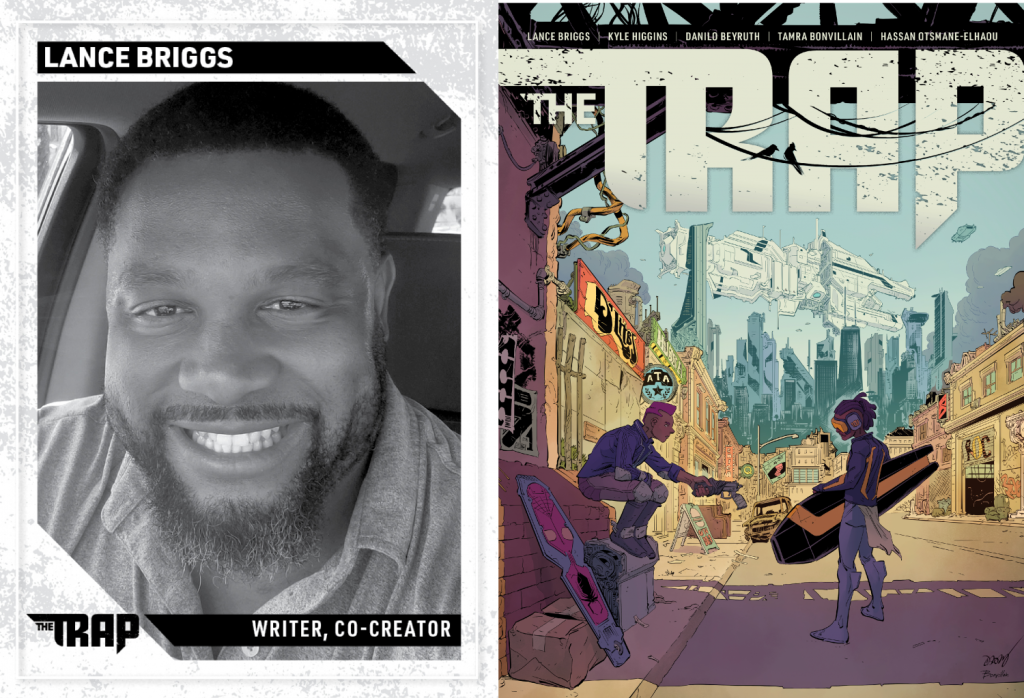 When the name Lance Briggs comes to mind, most sports fans immediately think of him as the former Pro-Bowl Linebacker for the Chicago Bears. And rightfully so. He had a twelve year career in the NFL with the Bears that included 7 Pro Bowl’s, and three All-Pro Selections in 2005, 2006, and 2007. But since his retirement, he has not been idle. In fact, he recently has teamed with veteran comic writer Kyle Higgins on a new graphic novel called The Trap. So with that in mind, we welcome writer Lance Briggs, to Geek Vibes Interview. Thank you for your time Lance.

From Football to Writing

GVL: So I know about some of your football career. But I had no idea that you had writing aspirations. When did you consider that as a possibility and what kind of books or genres did you read early on?

LB: I mean, I’ve always thought about stories. My whole life. I had a really active imagination. I still do. As far as books and genres, I was really into Darkhorse. X. There was a time when I picked up any character that looked interesting — I was collecting cards, and those cards help me to find new characters. Like XO Manowar, from Valiant.

GVL: So you obviously were already an avid comic book reader, who were your favorites as far as character or perhaps writer or illustrator?

LB: You know, speaking of XO Manowar, there was a Valiant Image crossover that I absolutely loved. With Ripclaw.

The Impact of Kyle Higgins

GVL: I know that a great deal of your time was taken up as an elite athlete. During the off seasons, did you cultivate any contacts or friendships that helped toward your writing aspirations? Perhaps a mentor or someone that encouraged you?

LB: Honestly? No one has taken me through a tour of the inner workings of comics the way that Kyle Higgins has. And for that, I will be forever grateful. I really liked working with Phil Hester, but this has been a more involved process.

The Lessons of Football

GVL: Well if you wanted to have mentor in the business, you could not do much better than Kyle. You obviously were immersed in your job as a Pro Football Player when you played. What, if anything, do you believe that you learned in your football career that has proven to be beneficial in this new endeavor?

LB: Well, to be a pro athlete… you have to be professional. And I know that probably sounds like a no brainer, but if you’re expected to be at a meeting at a certain time, you better be there early. It’s about responsibility, because at the end of the day, other people are counting on you. It’s a production based world and comics work the same way. Especially with how tight the deadlines are. So, the grind of making this book and putting together this Kickstarter and now launching it all… I definitely think that my prior career helped me prepare for this.

The Origins of The Trap

GVL: The Trap looks like such an impressive book. Where did the idea for The Trap originate and how did you get with Kyle and Danilo for this project?

LB: I’ve wanted to find a way to work with Kyle for a while now. We’ve known each other for years, and talked about possible collaborations in the past. About a year and a half ago, we started meeting to brainstorm a book together. Our first sit down lasted for about six hours, and it was in that conversation — where we talked about different character ideas I had, as well ways to explore some of the issues that really matter to me — that the setup for the world and the universe came together. A lot of the inspiration comes from when, where and how I was raised, as well as the two communities — Oakland and Elk Grove — that I was a part of. 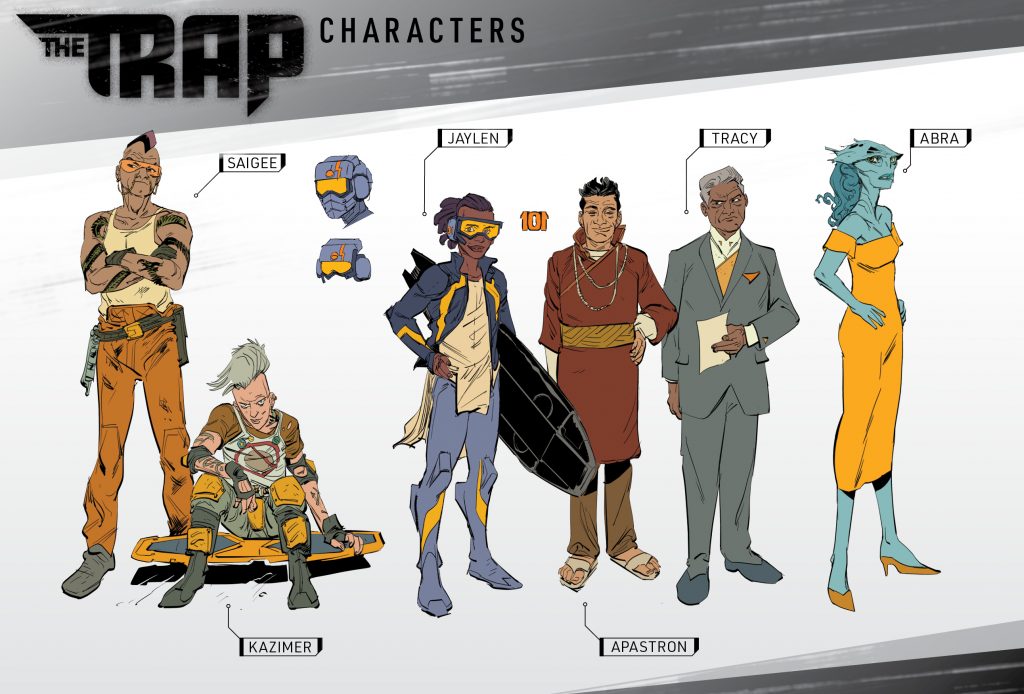 GVL: You have assembled a great creative team for The Trap. Did you have any input on who you worked with or did you trust in the publishers or your co-creators to connect you with other great artists for your first project?

LB: Well there isn’t a publisher for The Trap — we are the publisher. So, putting the whole package together and finding our other creative partners, I leaned on Kyle for a lot of that. And trusted him. But, we went over art samples together before finding Danilo, and he is such a perfect fit. Kyle and Danilo really wanted Tamra to color the book, which I think has turned out quite beautiful.

GVL: When The Trap is published, what do you hope readers get from your first graphic novel? Is there a lesson or concept you would like to get across or do you just want to entertain them?

LB: We’re more alike than we are different. We’re strong, together. Together, we can defeat any enemy. Truly.

GVL: Initiating a Kickstarter has become a popular way to get a project off the ground and The Trap is no different. So now that you initiated a Kickstarter for your book, how has that experience been for you so far?

LB: It’s exciting! And stressful! I wasn’t quite sure what the process would be like and how much work it would be to put it together. I’d say, predominantly, it’s been about me balancing my emotions. My patience, my excitement, my anticipation… ultimately, I think it makes the whole project that much more rewarding.

GVL: I can certainly imagine. You, Kyle, and Danilo have put so much work into this, but this is kind of your first go around. However, I expect that things will work out for you. So if The Trap is as successful as I believe it will be, have you and your co-creators Kyle, and Danilo considered any other possible stories in this setting? Would you be interested in doing that if the demand was high enough?

LB: Absolutely. One hundred percent. Great question. This first volume is — I would say — one thread of a larger tapestry, that we would love to weave together one day.

GVL: Now that you have had a taste of what’s involved in creating a huge book, do you have any other projects in mind after the completion on this one? Ones that you might be free to talk about?

LB: I have ideas, but nothing concrete yet! That said, this is truly something I love to do. So, if I can continue making books… it would be a dream come true.

GVL: Thank you so much for your time, Lance. Before I let you go, you should know I have a reputation of ending my interviews with a hypothetical question. I would be remiss in my duties if I didn’t do the same for you. So here is yours:

Your first book is well received, both critically and by the fans. So much so that it is nominated for a Eisner Award and you and your team win. If that were to transpire, where would that honor rank in your career? Above the Pro Bowls and All Pro awards? Below them? What would that kind of acceptance in writing mean to Lance Briggs?

LB: That would mean the world to me. Seriously. I fell in love with football at a young age and it had full control over my life for a long time. That kind of love, too, is rare. It’s the only thing I did in life that — growing up — I ever “bragged” about. My mom sat me down one day, and told me that I was bragging… and I shouldn’t. “Bragging means you’re talking about yourself. But if you’re great at something… you never have to talk about yourself. Because others will do it for you.” So, my approach to everything — including comics and writing — is similar. If I can create something that can reach people, that makes them go “that’s a great story,” that would be the greatest accolades I can imagine.

GVL: I love that answer. We at Geek Vibes Nation are so looking forward to The Trap and even more so what you have coming in the future. Best of luck on the Kickstarter and we will be following it all with great interest.

Be sure to check out the Kickstarter for The Trap and you can read our interview with Co-Creator/Co-Writer Kyle Higgins here.