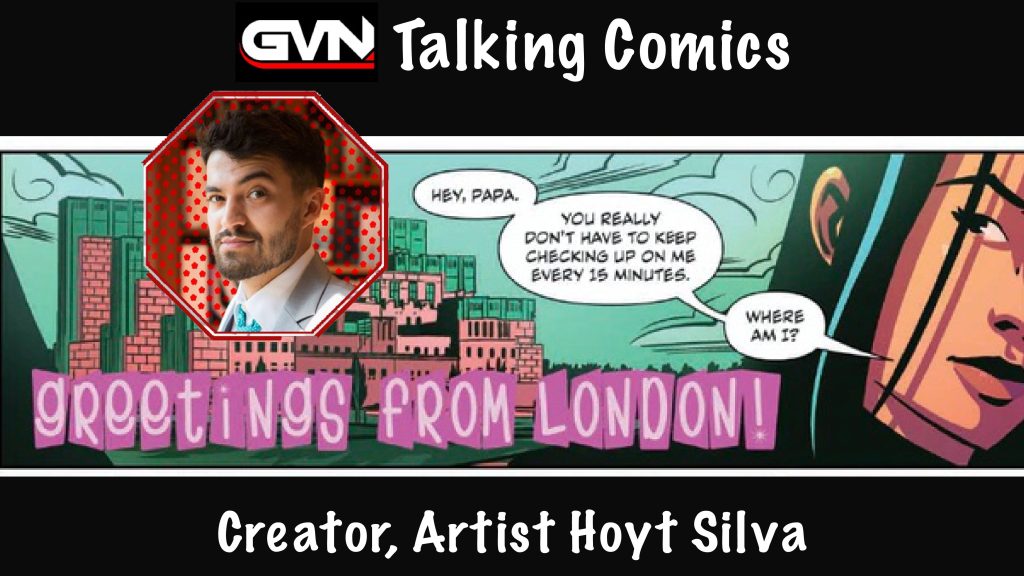 I was fortunate enough to have an opportunity to read a review copy of 12 Gauge Comics latest book Yumi: Spy Fatale, Baddie Royale. It was an incredible mix of spy action and a fun homage to Ian Fleming and his super Spy James Bond. While at the same time, turning the whole genre up on its head to see what shook loose. After reading this book I had the opportunity to talk to both of the creative talents behind Yumi. So for this installment of Talking Comics, we talk to artist Hoyt Silva.

GVN: Thank you for sharing some of your time, Hoyt. I know our readers appreciate it. So let’s start with your art history. When did you first take an interest in art and was comic art always an emphasis or did you start with a more traditional focus?

HS: Thanks for having me! As a kid I doodled in the margins of my school notebooks like anyone else and always thought art was cool. I loved movies, comic books, cartoons, and TV along with hip hop/rap music. After high school, I ended up going to community college for Graphic Design. But, it wasn’t until I was 23 that I started to actually take drawing seriously. That’s when I met Brian Stelfreeze who helped me see that I didn’t really want to do art, my true passion was for telling stories.

GVN: Who were some of your comic book inspirations? Was there a creator that you admired or style that appealed to you?

HS: There’s such a vast array of people I look up to and that list changes and evolves from book to book. The ones that are rooted in my base programming though are Rob Haynes, Mike Mignola, Cory Walker, Kevin Nowlan, and of course Stelfreeze.

GVN: That’s a great list. During my different interviews, I have found that there are so many different ways these projects are completed. Some include deep involvement with the writer in a great collaborative effort, some require almost no involvement at all. What is your preferred method of creation, working in concert with the writer or working from a script independently?

HS: I like to think that comics are not ideally made by individual publishers, designers, writers, editors, colorists, letterers, and artists but we function best as a team of storytellers each with a unique skill set that we use to tell the best story we can.

How Yumi came to Fruition

GVN: Your work on Yumi: Spy Fatale, Baddie Royal is so well done. Full of action, great changing of perspectives, and above all else, fun. How did you get involved in the Yumi project?

HS: Yumi was a collaborative effort from the beginning. The concept got it’s first legs after a conversation I had with our Editor Lisako. I was reading the Ian Fleming James Bond novels around that time, and the topic of action spy stories came up. She mentioned that there really wasn’t anything like that out there for her and we started discussing all the tropes of the spy genre and how much fun it was.

I came out of that discussion with an idea for a character and a scenario. Funny enough, the next day Doug calls me up and asks if I had any ideas to pitch with a badass female lead. I told him about the conversation and character that came from the night before and my love for the spy genre which he also equally loved. Doug took off and came back a week later with something far greater than I could’ve originally imagined. His outline and synopsis for Yumi would be the most fun action packed adventure I’d ever told.

GVN: I totally agree. The flash back scenes where Yumi is discussing her memories of Richard and their early relationship is a unique and fun transition. Whose idea was it to make that artistic change and how much fun was that to draw?

HS: I have to give that credit to our Editor. There was actually a different set of flashbacks drawn in the same style as the rest of the story. Lisako brought up the idea of making them more whimsical and less serious. Stating that they would be more fun if they somehow conveyed not what actually happened but a skewed representation of her memories. I asked “Well, what if I draw them in a cuter style?” Her response was classically “I don’t know? Can YOU do that?” We had a good laugh when my only response was a shrug and with that I sketched up some new layouts and passed them around and everyone agreed it was the way to go. 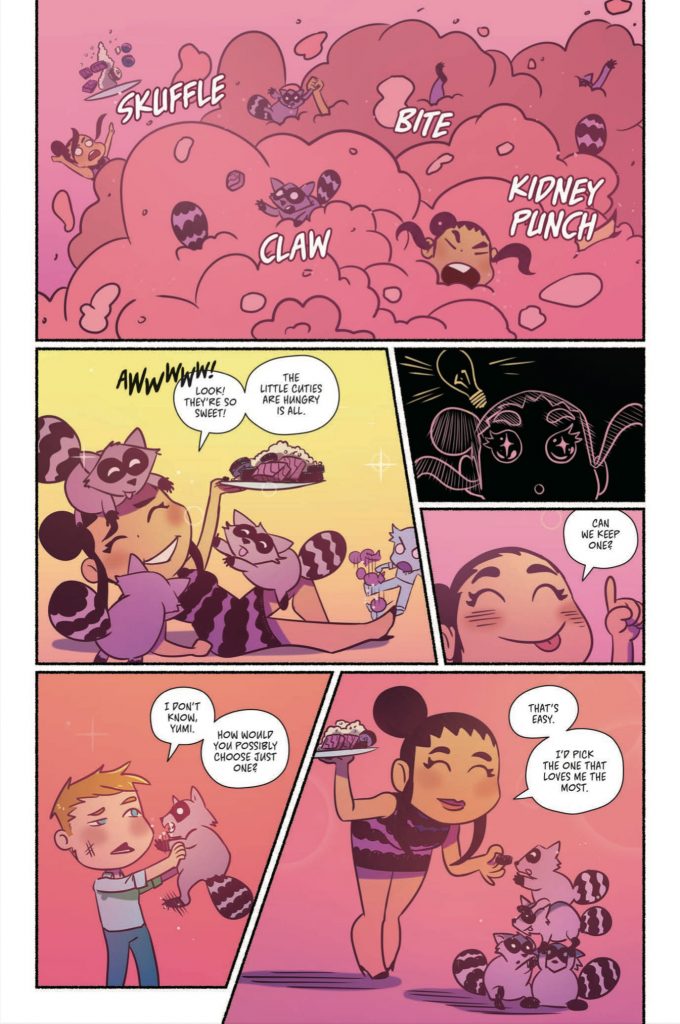 GVN: For Yumi, you are working with colorist Kevin Lennertz who did a great job on Yumi. Have you ever worked with Kevin before and how much collaboration is involved between artist and colorist?

HS: Kevin started off as an intern at Studio Kiso. Brian and I immediately clicked with him and he impressed the both of us with how much he really grew in a short time. We worked closely through out the project but it was more me wowing over his color choices and being excited to see what he was going to do with each scene. I think that when you trust someone to do the thing you should let them do the thing. Especially when someone does that thing so well.

GVN: Yumi is hitting Kickstarter on the 9th. Is this your first experience with Kickstarter and what are your hopes, beyond complete funding? Do you have any artistic goodies in the works for different tiers? At least ones you can share?

HS: This is my 3rd Kickstarter rodeo. I’ve successfully funded both an art book and Trey Walker and My graphic novel “Last Stop.” At the end of the day I hope everyone who backs the project enjoys the story and has a great time with it. When it comes to artistic goodies there’s definitely plans in the works but I’m going to let the powers that be handle their release.

GVN: Thank you so much for your time, Hoyt. One last question of a hypothetical nature. I asked this of Doug so I will repeat the same question to you. Yumi, Spy Fatale, Baddie Royale is well received. So much so that an animated adaptation is in the works. Who could you see voicing Yumi and her automotive sidekick Jules? As an added bonus, you are allowed to write yourself into the story. What kind of character could you see Hoyt Silva as?

HS: Whewwww that would be awesome. Alright, dreaming here; I think Lana Condor or Ellen Wong might strike the right notes for Yumi and Jules would undoubtedly have to be Cardi B. Like, really there’s no other choice. As far as writing myself into the story, well I kinda did. I modeled for myself as reference for most of the male characters in the book. But I used something closer to my likeness for Quinlan; MI6’s tech specialist. Not sure why really? I guess I needed someone and I happened to be there. I do hold a special place in my heart though for the forgotten side characters of the  spy genre in general so maybe that has something to do with it.

GVN: Great Answers. Thank you very much, Hoyt. We will be following Yumi: Spy Fatale, Baddie Royale with great interest.