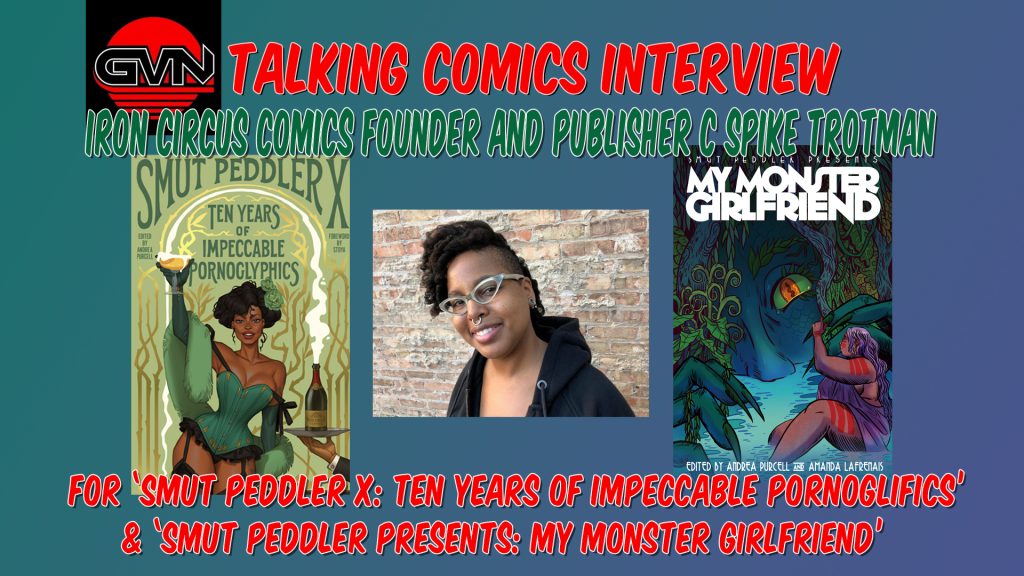 When it comes to self-publishing and crowd funding, the creative mind of C Spike Trotman was involved from the beginning. Not because it was trendy at the time, but more because it was the only way to get things published. Since that time, Spike had created avenues for many talented creators to put their projects out there through their Iron Circus Comics banner.

One of Iron Circus first publications was an erotica anthology entitled Smut Peddler. This collection of intelligent and creative erotica was first crowdfunded by Iron Circus back in 2012 and again in 2014. Now ten years later, Iron Circus is crowdfunding a double-header with both a brand new and even bolder Smut Peddler and a deluxe tenth anniversary edition of the original 2012 Smut Peddler. In addition, they also are including Smut Peddler Presents: My Monster Girlfriend, which is the long-awaited companion to Iron Circus’ first full-color anthology project, My Monster Boyfriend.

This new follow-up features almost 300 pages of new stories, while Smut Peddler X: Ten Years of Impeccable Pornoglifics brings back the original Smut Peddler from 2012—featuring all the groundbreaking stories from the original anthology, as well as tons of extras including a foreword from Stoya, short essays from the original editors, and hidden treasures from the archives, all wrapped in a brand-new cover by superstar artist Claire Hummel. The Smut Peddler Double Header is crowdfunding now on BackerKit.

Recently, we sat down with the force behind Iron Circus Comics, and discussed with Spike the beginnings of the brand, crowdfunding in its infancy and the 10-year anniversary of Smut Peddler. Not to mention the long-awaited follow-up to My Monster Boyfriend. So, let’s welcome Iron Circus Comics founder C Spike Trotman to GVN Talking Comics.

GVN: Thank you for giving us some of your time, Spike. We do appreciate it.

CST: Thank YOU for letting me talk about this incredible project!

GVN: Since this is our first opportunity to chat, let’s start at the beginning. When did you take an interest in comics and whose work first drew your attention to the medium?

CST: Oh wow, taking it WAY back, ha ha. I grew up during what I consider the final golden age of newspaper comics, specifically. That was when Calvin & Hobbes, The Far Side, Bloom County, those strips were in the papers. I genuinely looked forward to every Sunday, my family got The Washington Post delivered and it had a great comics section. I still remember seeing the “Tyrannosaurs in F-14s” Calvin & Hobbes strip, and I was just awestruck. Like, I did NOT understand how someone, ANYONE could learn to draw so WELL. It was like witchcraft to me.

GVN: You and I share a brain when it comes to Bill Watterson’s Calvin and Hobbes. It was pure genius and still funny as hell for me today.  So, you took the initiative to self-publish on the web early on in your career. As you think back, what made you take that plunge and how did it inform your thinking as you came to develop Iron Circus Comics?

CST: Oh, that’s an easy one. It’s hard to imagine now, but the comics environment I was attempting to go pro in at the turn of the century was this ossified, slowly dying industry. This was only a few years after Marvel declared bankruptcy, the black-and-white boom had gone bust, Diamond secured its monopoly, and something like one-third of ALL comic shops in the US closed for good. People would advise you to forget it, go into illustration or animation, because comics wouldn’t even be around in ten years.

In an environment like that, there was very little interest in the kind of comics I enjoy making; weird stuff, experimental stuff, slow-boil dramedies, smut. Editors had to sell to the monthly-periodical audience, who overwhelmingly wanted superhero books they grew up with or nothing. The small press was black and white—an aesthetic I still prefer, honestly—self financed, and hobbyist. It was only very, VERY rarely something you could make a living from. But y’know, I was 21, I was “I’m special, I’m different, this is gonna be my job, I’ll figure it out.”

GVN: Needless to say, you did…and THEN SOME. When you started Iron Circus in 2007, did you have any apprehension about attracting talent to your banner or did you already have some creators on board in its infancy?

CST: Oh, Iron Circus was 100% a self-publishing imprint, originally! I never imagined it would turn into what it has, ha ha. It was just so I had something to put on the spine of the print editions of my webcomic, “Templar, Arizona.” To be perfectly honest, by the time I wanted to try publishing other people, I’d been in the scene so long and made so many friends that finding folks to publish has never been difficult!

Crowdfunding Since its Infancy

GVN: You have been using crowdfunding in one form or fashion since its conception with great results, bringing great books with talented creators for public consumption. (One of your books ‘Real Hero Shit’ by Kendra Wells is on my initial list for the best of 2022)

GVN: As a follow-up, if that avenue (crowdfunding) had not been open, do you feel like you could have still accomplished the success you have so far? You seem driven enough to still get it done.

CST: Here’s something I think a lot of people don’t realize… I was “crowdfunding” long before Kickstarter existed. Heck, a LOT of webcomics was, at the time.

There was no infrastructure in the mid-late 00s; no E-Z, plug-n-play storefronts, no Ko-Fi, no Patreon. We had banner ad revenue, and we had PayPal tip jars at the MOST, and we used those to take pre-orders for print runs. And doing so was very risky; PayPal was very motivated to prove to people how safe they were.

That was back when there were people who just plain did not spend money on the internet, period; they considered the whole thing unsafe! And PayPal wanted to bury that idea, so they had very strict rules about how much time could elapse between taking payment and delivering goods. And if you went over that limit, and someone complained? Your whole account could be terminated! And back then, they were pretty much the only online payment processor! That would just be the end of you trying to make money online!

If I seem driven—thank you for that, by the way— it’s because I had no choice, really. If I didn’t self-publish, I was never getting published, period.

The Origin of Smut Peddler

GVN: One of the series that established Iron Circus Comics’ perchance for intelligent, well written and drawn erotica was your Smut Peddler anthology first crowdfunded in 2012 and again in 2014. As mentioned in its PR, it was “edited by women, and made for everyone.” What was it about the original Smut Peddler that captured reader’s imaginations enough that 10 years later it’s still breaking new ground?

CST: One of the most ridiculous things to me back then was how difficult it was to find fun, smutty comics I liked. A lot of it was a major turn-off for me and a ton of my friends, primarily for the obvious, pervasive sense that none of it really gave a damn about any women involved in the story. That sucked. And it filled us all with serious “God, FINE, if no one’s going to do it properly, we’ll just do it ourselves” energy. When I put together the first Smut Peddler, nearly EVERYONE I asked to participate IMMEDIATELY said yes, it was like they’d been waiting for someone, ANYONE to ask them to make smut! The zeitgeist was out there, I was just part of it. The person willing to do all the admin, ha ha.

Ten years later, the remit of Smut Peddler has expanded. We’re no longer woman-only, for starters; We broadened that to include anybody who got the Smut Peddler vibe, which is a know-it-when-ya-see-it type thing. We’ve also started theming our collections, to keep things fun; Sex Machine for robots and A. I., Sordid Past for historical stories, Silver for sexy older people.

GVN: Included with the 10th anniversary edition of Smut Peddler on the campaign is the long-awaited companion to your first full-color anthology project, My Monster Boyfriend. What made it time to pull the trigger on My Monster Girlfriend?

CST: God, people have been pleading for this follow-up since My Monster Boyfriend, I’m glad I can finally give it to ’em! We had to put some space between My Monster Girlfriend and MMB, though, we already had so much stuff lined up, half finished, waiting in the wings. But honestly, from the moment MMB debuted, we knew we were gonna have to get around to MMG! The demand was too great. 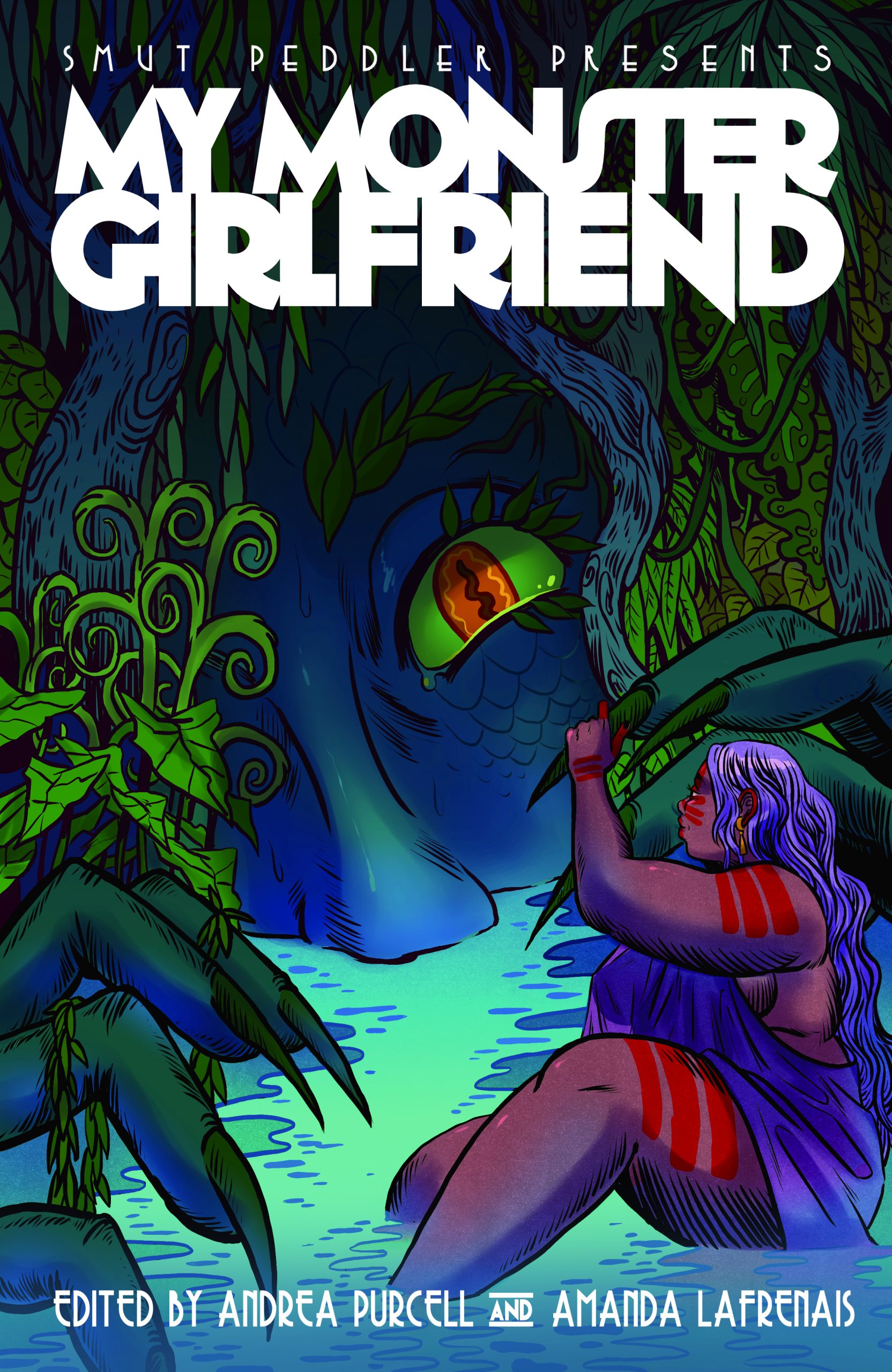 GVN: What else can fans find when they check out this exciting new campaign? Either for long-time fans of the Smut Peddler Anthology or newcomers to the party?

CST: We’re funding as part of Backerkit’s beta launch of its crowdfunding service, and we encourage everybody to check it out! It’s a real level-up from Kickstarter for creators and backers alike. When folks get their backer levels fulfilled, they will be able to add-on every Iron Circus book we’ve published as well! They can collect the whole Smut Peddler set, along with everything else we’ve published! And we’re dropping our stretch goals this week, which we’re really excited to share.

GVN: Thank you once again, Spike for spending some of your time. Before I let you go, I want to give you an opportunity to promote any other projects, and where can fans find out more information on you and Iron Circus Comics?

The Backerkit Campaign for the Smut Peddler 10-year anniversary edition, Smut Peddler X as well as My Monster Girlfriend is underway. Check out what all the excitement is about here.