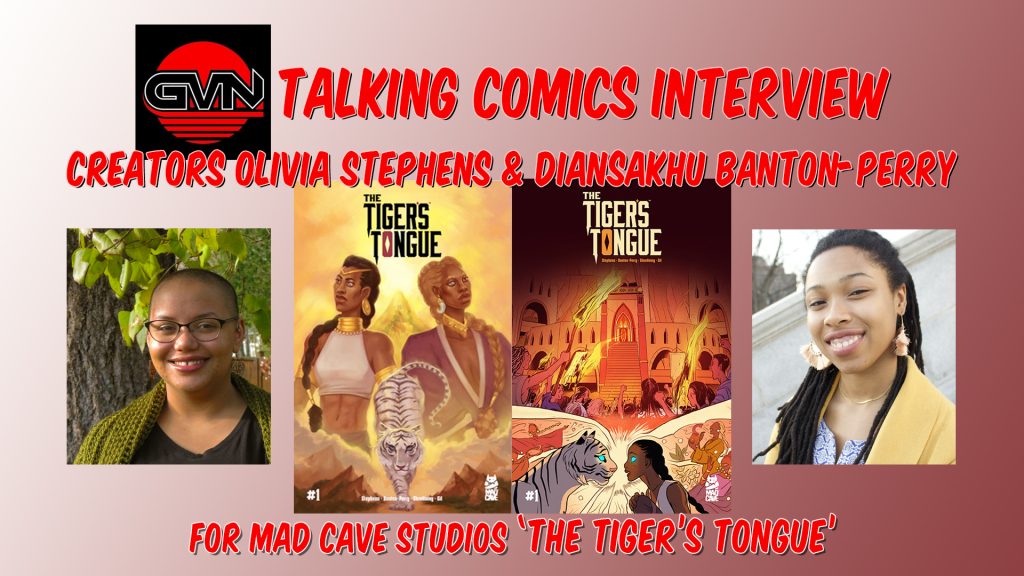 Back in September of 2021, I had the good fortune of talking to talented creator Olivia Stephens about her new book at that time, Artie and the Wolf Moon. Like with most interviews, I commented at the end of our talk that we would hopefully talk to her again in the future. Well the future is now as Stephens and talented artist Diansakhu Banton-Perry have collaborated with Mad Cave Studios for their magical new book, The Tiger’s Tongue.

Recently, we sat down with the talented creators to discuss their new book and how it all came about. So, let’s welcome Olivia Stephens and Diansakhu Banton-Perry to GVN Talking Comics Interview. Starting with the returning Olivia.

GVN: Thank you once again for giving us some of your time Olivia. The last time we spoke, it was for your release of Graphics Universe and Lerner Publishing’s Artie and the Wolf Moon. But now, you’ve teamed up with talented artist Diansakhu Banton-Perry for The Tiger’s Tongue for Mad Cave Studios. How did this collaboration with Mad Cave come about?

OS: I was approached by Mad Cave back in the spring of 2020 about writing a limited series. They sent me a basic pitch proposal with the general idea of sisters fighting for a throne, among other things. I despise monarchies as a concept, so naturally I said yes to coming aboard and being able to write my own interpretation of royal fantasy. Mad Cave stressed that I was free to change and stretch the pitch material in any way that I wanted, as long as that central conflict remained. And I did! I’m very grateful for that creative freedom.

As fate would have it I was actually able to search and scout the creative team alongside the project editor, Michael Moccio. I scoured through the #DrawingWhileBlack database and came across Diansakhu one day and thought “Damn, she can draw!”. I feel very lucky that she signed on.

GVN: The Tiger’s Tongue is a classic fairy tale replete with strong female characters and intrigue from the very start. Please give us a synopsis of what the series is about and what the story was based on?

OS: The story takes place in the fictional realm of the Claw, which is ruled by a clan known as The Tiger’s People. Generations ago, they were gifted with the powers and companionship of mystical tigers after their warrior leader saved a Grand Tiger from death. Descendants of this warrior used their inherited abilities to colonize the land surrounding a great river, as well as that land’s inhabitants.

At the start of the story, the Claw is in turmoil as the spirit of revolution blooms amongst its subjugated masses and the two crown princesses, Kelindi and Aridani, come of age. They soon find out that they must compete in a series of trials to determine which of them will rule and bring forth a brighter future.

This story was largely born out of my own frustration and rage about surviving inside the margins of a failed colonial project. I often turn to writing fantasy as catharsis, and this series is no different.

GVN: As a talented artist and storyteller, this is the first time that you have turned over the drawing to another artist and focused just on writing your story. Has it been hard to relinquish the artistic reigns for this project?

OS: I was actually most worried about being able to write in a way that was clear and concise enough  for another artist to draw with minimal confusion. But I also wanted the script to be open enough for them to bring their own artistic license to the look of everything. It’s been incredible to watch Diansakhu and the rest of the creative team take the art above and beyond my own vision. It’s actually made me respect the craft of drawing comics even more, but from an entirely new angle.

We now switch to talented and upcoming artist Diansakhu Banton Perry. Come to find out, she was from my hometown of Richmond, VA. I knew I liked her.

GVN: Thank you, Diansakhu. With this being the first opportunity to talk to you, let’s start with a bit of your background. (The fact that you went to VCU was an immediate attention getter as I live in Richmond, VA 😊) When did you take an interest in art and comic art specifically, and who were your inspirations that lead you to that path?

DBP: Oh how cool! Richmond creates so many random connections! I actually live in Richmond because I went to VCU for their art school. I’ve always loved art since I was super young, so becoming an artist was kind of inevitable. Going into digital arts and comics was mainly because I got into manga and anime as a kid. I scoured the internet looking for art that looked like fruits basket, and I found deviantart! And that had all the art tutorials for copic markers and paint tool sai which was all I needed to get started.

That manga influence never went away as I got older, but I kind of strayed away due to some college expectations. I was definitely told that the cartoony/anime style that I had in high school would not get me into college or get employed by anyone. But that ended up not even mattering and I found my own style. I learned more about indie comics and animation, and everything that goes into making those things in college. With all that, my biggest and consistent inspiration always comes back to Studio Ghibli films. And that goes into comics as well.

GVN: How did you get involved with the talented Olivia Stephens on The Tiger’s Tongue and how has that partnership evolved as you worked together?

DBP: I was actually recommended by a friend from college! I had never worked on a long form comic before, and I knew it was something I wanted to experience. Being able to work with Olivia and our editor Mike has been some of the best parts of this partnership. They are both so understanding and encouraging. Olivia and Mike had video chats with me, and we got to meet in person (We live on opposite coasts!) They helped so much in making this a good experience, even when I was doubtful of myself.

Working with a Fellow Artist

GVN: In talking to Olivia, I had asked her if surrendering the artist duties was a challenge for her. Did working with a fellow artist and illustrating HER story give you any pause or was it business as usual for you?

DBP: I had never worked on someone else’s story in this way, so I was very nervous about it! I knew it was something I wanted to do, but it had always been at such a smaller scale. I was worried about getting the characters right, and maintaining detail! But Olivia and Mike really helped me understand how I needed to move forward with some awesome advice, and brush away a lot of the insecurity that would come with drawing someone else’s story.

Finally, I asked some question for them both.

GVN: If The Tiger’s Tongue is well received, as Mad Cave Studio books always are, do you have any ideas for future stories past this first series?

OS: Not at the moment! I wrote the series with a pretty firm ending. But there are some threads left that could lead to more, I imagine.

GVN: Thank you both for your time. We will be following Mad Cave Studios “The Tiger’s Tongue” with great interest. And hopefully talk to you both again in the future.

OS: Thanks so much for having us!

DBP: Thank you for the opportunity!

Mad Cave Studios The Tiger’s Tongue #1 is coming July 6th and can be found where great comics are sold. But if you prefer your comics in digital format, finishing up with a print TPB, you can check out Mad Cave’s new subscription model for their books, including The Tiger’s Tongue, here. In addition, you can find our review of Issue #1 here.