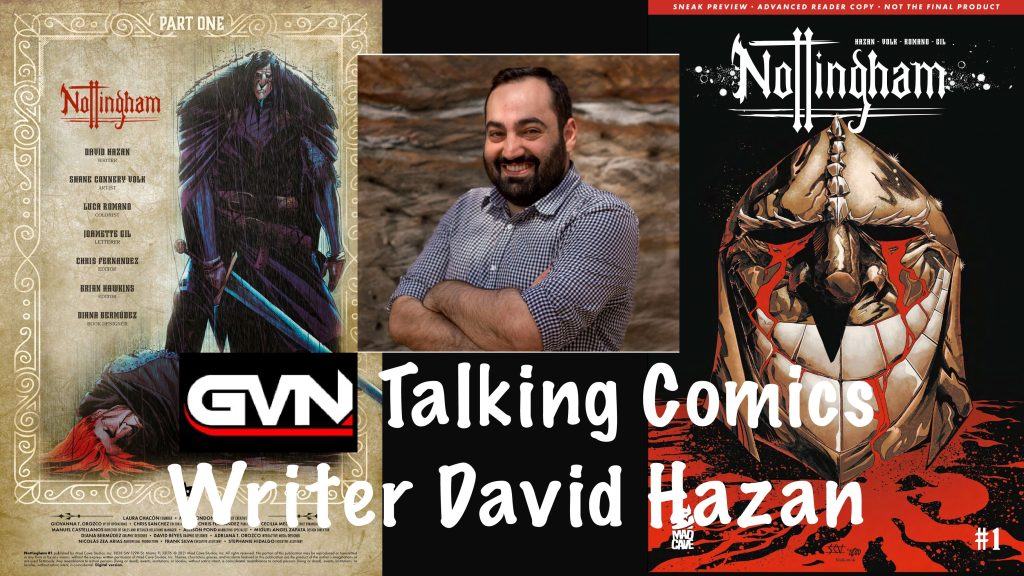 Mad Cave Studio has opened doors for many new creators with the Mad Cave Studio talent search. Run annually, they look for new artists and writers to develop new material for their line. In addition, it also offers creators an opportunity to get their feet in the door.
The 2019 search yielded writer David Hazan and artist Shane Connery Volk. Mad Cave wasted no time in putting them together and the result is Nottingham. A unique examination of the Robin Hood tale with the center character being more the Sheriff than Robin Hood. After reading the premier issue, I knew we needed to talk to writer David Hazan. So let’s welcome Nottingham writer David Hazan to GVN Talking Comics.

GVN:  Thanks for sharing some time with us, David. So let’s start with how did a young man from Australia come into comic writing and who inspired you to go that direction?

DH: I’ve always been writing, but unlike most in the comics world I started reading comics quite late (in some part due to parental discouragement, but that was the general consensus at the time, I suppose). I’ve always had an affinity for other media that drew on comics, for example, my obsession with television is something I attribute almost entirely to shows like Smallville and Heroes.

In about 2018, by virtue of some kind colleagues I was encouraged to pick up Batwoman Elegy by some work colleagues. Rucka and Williams’ work on that book is so beautiful and so convincingly queer that it hooked me and I haven’t stopped reading comics since…and when I love something that much, I can’t help but try to make it myself.

GVN: You were the winner of the 2019 Mad Cave Talent Search. What made you decide to take that plunge and did you have any trepidations going in?

DH: I entered on whim, really. Luckily, I came from a place of zero pressure. I had no comics credits, and I wasn’t hugely invested in writing comics as a career at the time that I entered. Not to single anyone out, but I feel like I see a lot of people trying to break into this industry talking a big game on social media, often to their detriment. It takes the focus off actually doing the work.

The Talent Search process itself is very rewarding, and you have to have fun with it, or your enjoyment won’t come across in whatever you submit. Mad Cave’s big, Genre-with-a-capital-G stories lend themselves to you taking the biggest swing that you can. So naturally I wrote a Battlecats story and killed almost the entire cast in the first few pages. For anyone reading this and thinking of entering a Talent Search (there are a few other than Mad Cave’s), I have one big piece of advice – stay true to the source material, of course, but make it you. Make it the most you thing you’ve ever written. Sell your soul through the script or the art.

GVN: Your new title Nottingham is a brilliantly different adaptation of the classic Robin Hood tale. How did you decide to make that your story and what if any research did you do before putting word to paper…or screen?

DH: Mad Cave asked me to pitch them a noir, but I really wanted to set it apart from whatever was already in the market…and so I decided on an unconventional setting – a medieval police procedural. At that point, something stood out to me about the Robin Hood story. It wasn’t only because it’s an entrancing myth – it’s also because it’s about people coming home from war, in this case, the Third Crusade. This is very much a reflection of the birth of the noir genre from the darkness soldiers brought home with them on their return from WWII.

From there it was easy to cast the characters in familiar noir roles, but in ways you might not expect. For example, the Sheriff of Nottingham is our brooding detective-protagonist, our eyesand ears into the world of Nottingham. Maid Marian we transformed from some-time heroine, most-of-the-time disempowered love interest, into a formidable femme fatale.

From a practical perspective, with only five issues to tell a story, it helps to come into something with an instantly recognizable. It allows you to put a lot of worldbuilding into a kind of shorthand and dive right into the action. On the flip side, however, it also allowed us to subvert our readers’ expectations and serve them a fresh take on characters they think they know so well.

Not Your Everyday Sheriff

GVN: I really like how you chose to make the Sheriff a highly competent and dangerous person and not lean toward the usual way that character is portrayed. Was that an emphasis for you?

DH: I think for me, it was more about the kind of story I wanted to tell and the lens I wanted to tell it through. A wacky, moustache-twirling, incompetent Sheriff didn’t really fit the plot or setting, so I made the character edgier, and stifled not by his own incompetence but by the political and social forces at play in the world around him.

GVN: Do you work by doing outlines for a story or a full script? Or doors it depend on the artist?

DH: Whenever you’re working with a publisher in a work-for-hire capacity, outlines are just something that have to happen, because that’s how the business works.

If you’re asking if I prefer Marvel method or full script, then the answer is most definitely full script. It’s part of the way my brain processes writing comics, with pages as a unit of storytelling. I also have a penchant for formalism that I can’t seem to shake. The way I write my scripts and the level of detail does scale up and down by artist, however.

GVN: Speaking of Artists…You are working with the talented artist Shane Connery Volk on Nottingham. How did you get connected with Shane and did his contributions alter how you envisioned the story?

DH: Shane actually was another Talent Search winner in 2019 (on the art side) and Mad Cave put the two of us together when they realized how much I enjoyed writing unhappy characters and how much Shane enjoyed drawing frowns.

In all seriousness, Shane absolutely transformed the way I saw the story. His iterations on my ideas dialled the unsettling ambience up to eleven and this story doesn’t work without the detail he put into all the faces and acting that goes on in the book. There’s also a lot of exaggeration on certain details (for example, our Sheriff’s cloak) which had an effect that I hadn’t envisioned, adding volumes to the dramatic tension.

GVN: Thank you for spending some time with us. For your final question, I go the hypothetical route. Nottingham has become a great hit. So much so you have been approached to do an animated adaptation of Nottingham. Who could you hear as being the voice of Sheriff Blackthorn or The Hood?

DH: Ooh – this question is so different to live action casting. For our Sheriff, I’d say Sean Bean. For Hood – say either Tom Hiddleston or Henry Cavill.

GVN: Thanks again David and we look forward to following Nottingham and your future projects. You can find our review of Nottingham here.