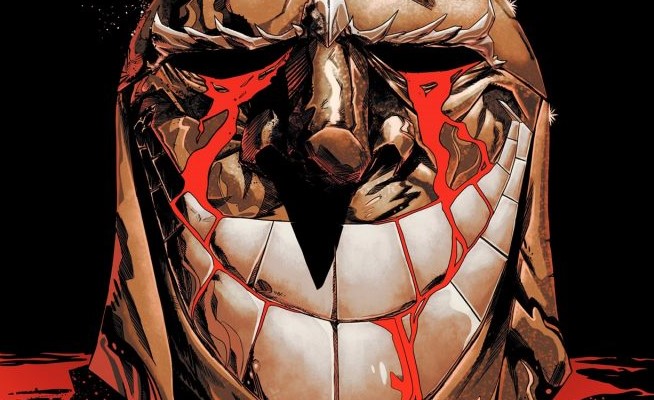 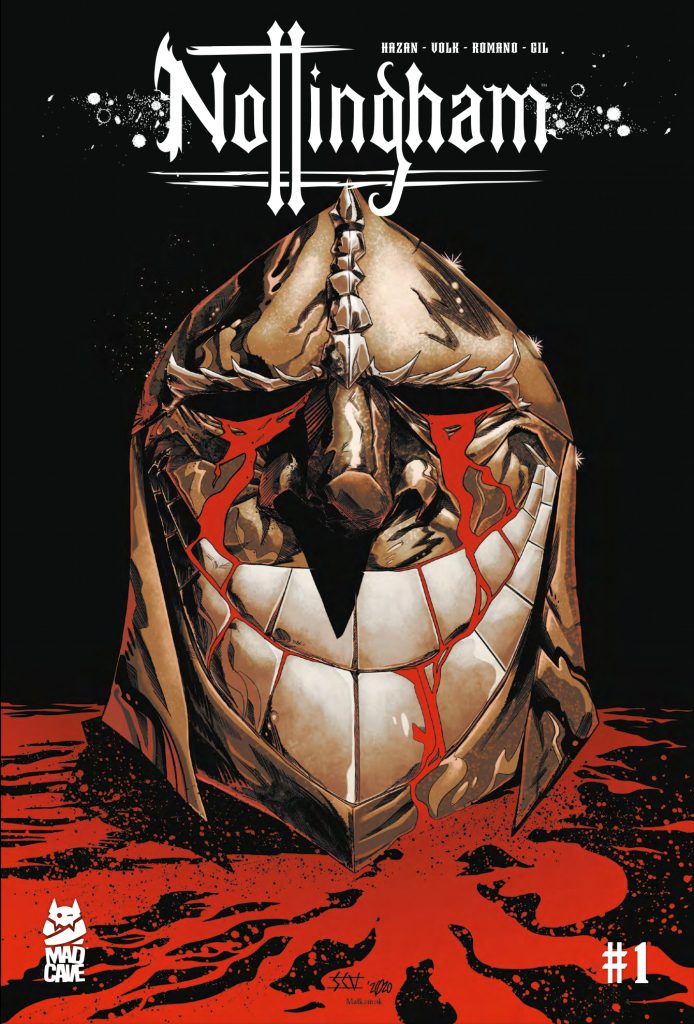 Most people are familiar with the iconic tale of Robin Hood and his Merry Men. From their base in Sherwood Forest to their mantra of “stealing from the rich and giving to the poor.” And while in most depictions of the tale, the violence has been subdued at best. But what if the tale went a different way. What if instead of being considered heroes who relied on their wits more than violence, Robin Hood and his men were on the wrong side of that coin. What if they were instead, more ruthless. So much so that few men survived an encounter with the Merry Men.

That is lens that MadCave Studio’s Nottingham views the tale through. As written by David Hazan and masterfully drawn by Shane Connery Volk, it tells the tale in a gritty, bloody, and intense style that draws you in the same way that a train wreck might. You don’t want to see anyone hurt, but you can’t turn away from the carnage. Welcome to Nottingham.

The story begins with depictions of violence, of retribution, of justice. At least, as one side might tell it. Whether it be in Locksley, Edwinstowe, Nottingham, or Sherwood Forest. No place was safe from the Hood and his Merry Men. And in each case, judgement was swift, and it ruthless. Particularly for one type of profession: The Tax Collectors. Such was the new norm in Nottingham. 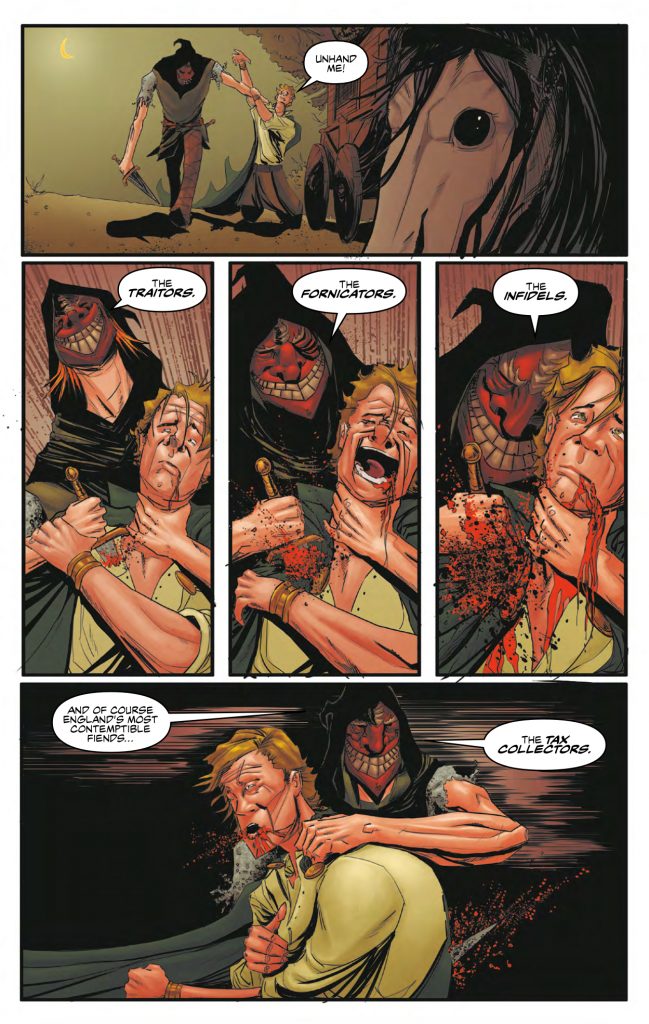 But as one might expect, these events didn’t transpire without notice. Enter Sheriff Blackthorne. He had been following the goings on in Sherwood and the surrounding areas with interest. Especially when it seemed that the tax collectors were being targeted. So when the last tax collector was found beset upon, he made his appearance to talk to Captain Alan Dale. The scene was not pretty but nor was it unexpected. Thomas Wright was found in the drivers seat filled with arrows as were the horses. (Damn shame about those horses.) But while Dale assumed that this was the work of the Merry Men, Blackthorne wasn’t convinced. 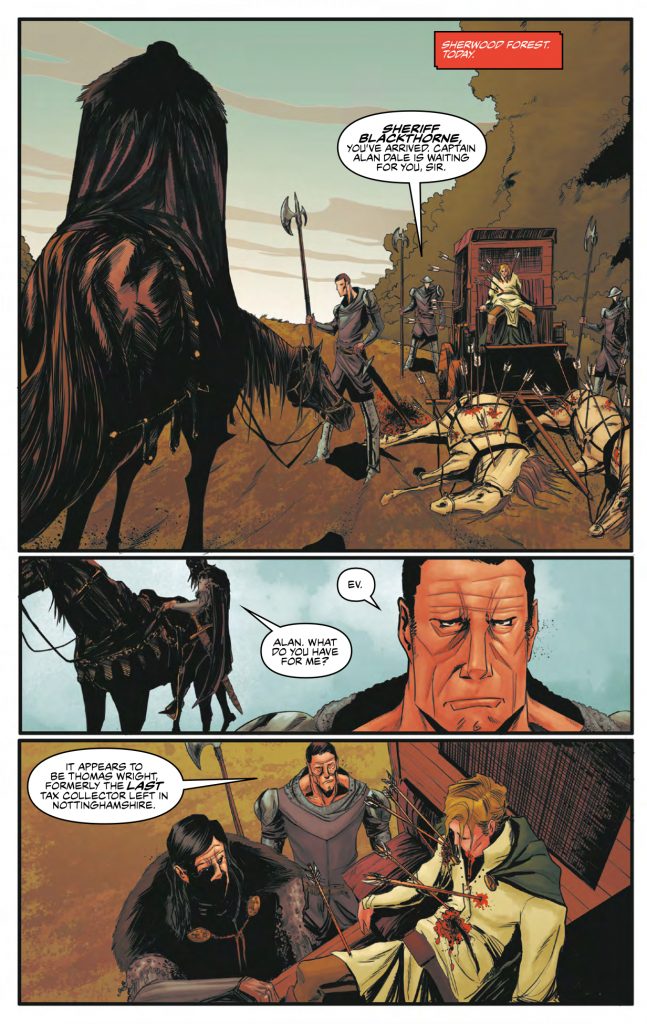 Not What it Appeared to Be

The scene was meant to look like an ambush. But it lacked the chaotic look of such an attack. Every shot was precise and most importantly, there was only one set of horse hooves leading away. No, they were meant to believe that this was the work of the Merry Men. But the evidence didn’t support that conclusion. It appeared to be one man. And when added to the tuft of red hair recovered from the body, the Tax Collector had apparently been in the company of another at some time. In addition, the road lead to only one place. Manor Fitzwalter. The ancestral home of the red-headed Marian. It appeared that Blackthorne would be paying the Lady a call that night.

If there was one thing that Sheriff Blackthorne should know about Marian, she can hold her own against men who underestimate her. She also has no problem in taking the bull…(or the Sheriff) by the horns when pushed to it. However, she tells Blackthorne that she would help him in his investigation. For pity’s sake if nothing else. She informed him that there was a driver to that carriage they found, and he was red of hair. With that information, the Sheriff set out to search for the missing red headed man. But he also promised Marian he would return in the future to continue their conversation. He believed she knew more than she was telling him, and he would find out what that was. For her part, Marian told him she looked forward to their next conversation.

Armed with what Marian had given him, Blackthorne had every red haired man brought in for questions. If by questions they meant beatdowns and abuse, then they were doing exactly what they planned to do. What they weren’t finding were results. Eventually, they found a young man who told them upfront he had no knowledge of what they sought. Unfortunately for him, they found one of the masks that the Merry Men wore. A creepy looking visage that was a cross between Satan and the Joker.

But before they could question him further, they heard someone scurrying across the roof. The Sheriff gave chase to find Will Scarlett, the young man’s brother. They battled but the Sheriff was more experienced and took advantage of a close lightning strike to gain the upper hand. He wounded Scarlett and then knocked him unconscious with the hilt of his sword. It gave him what he wanted: A Merry Man to question.

The Questioning of Will Scarlett

Once again, the Sheriff’s questioning technique was light on questions, and heavy on torture. To his credit, Scarlett held firm. Even with broken ribs, and hanging from his ankles. All he did was keep repeating the mantra of the Merry Men about Stealing from the Rich and how they were doing it all for King Richard. Blackthorne finally had him cut down to think about his position over the night. Blackthorne had questioned strong men. Eventually, they ALL break. Scarlett would prove no different.

Meanwhile, The Hood was making an appearance at Marian’s. She was not alarmed as he entered her window as she knew who he was. Robin of Locksley removed his signature mask. This one looked like a cross between V from V for Vendetta and again, the Joker. He informed her that Will had been taken into custody by Blackthorne. He also surmised that she had something to do with it. Marian didn’t deny it. Will’s perchance for making moves on his own was ruining their plans.  Robin corrected her, reminding her they were HIS plans. He was trying to find out about the contents of the Nottingham vaults. However, it appeared that she was more concerned about enriching herself while rolling around with the tax collector. “Maid” Marian? He thinks not.

Marian explained that she found herself in a “financial situation” that would not be necessary if he just married her as they had planned. Robin reminded her that he could not marry her until King Richard returned and they were victorious. In the meantime, things would have to remain as they were. However, none of it would matter if Will Scarlett talked. He returned his mask to his face as he prepared to leave. And while Marian assured him that Will was so loyal to Robin, he would never betray him, the Hood could not take that chance. So in the dead of night, the Hood once again brought the cure to England. This time, with a visit to Will Scarlett.

I have enjoyed the many interpretations of the story of Robin Hood. From Errol Flynn, to Kevin Costner, or Cary Elwes, they were always good stories but usually the violence was toned down. In addition, the Sheriff of Nottingham was usually depicted as less than competent. But not in Nottingham. The kids gloves we’re definitely removed in this version of the classic tale. Neither the Merry Men nor the Sheriff approached their business with anything less than serious intent. It is a fresh approach and works extremely well.

Writer David Hazan keeps the historical nature of the time while interjecting the ruthlessness and violence that has been eliminated from other adaptations. Hazan remarked as such recently while talking about Nottingham.

Nottingham has been so thrilling to write because we immediately eschewed all the markers of the original fairy tale. It’s not about a clash of heroes and villains. It’s a story about people with very human concerns and real choices to make, that connects to actual historical events. Moreover, it’s about our Sheriff, a man with all the privilege of his station, but none of the nobility, mired between clashing political forces, with a million-and-one dreadful choices to make before the dust settles.

Such a diversion from the norm required an artist with the skills to pull it off. Enter Shane Connery Volk. His interpretation of the characters gave them both validity and in some cases, downright insidiousness. The Sheriff was particularly well done with black shadows prevalent around his haunted visage. Serious work being done by a serious man. When combined with the vibrant color of Luca Romano, it made for a very stylish interpretation of the iconic tale told in a whole new way. For his part, Hazan was extremely proud of their work.

Shane’s art brought all this to life, particularly in the way he presents each character, as you can see the weight of their world in their figures and postures and the lines in their faces. I couldn’t have asked for a better team for this book and I can’t wait to surprise readers and challenge their preconceptions about characters they think they know so well.

If you are a fan of the Robin Hood story and are looking for a different take on the subject, Nottingham should definitely be on your list for the coming year. Look for Mad Cave Studios Nottingham on March 3rd, 2021 where great comics are sold.