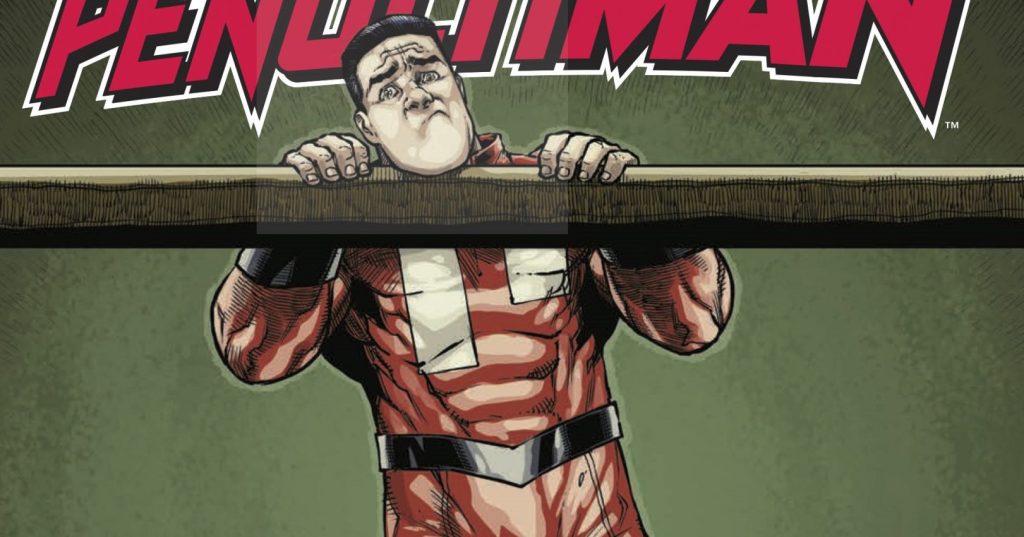 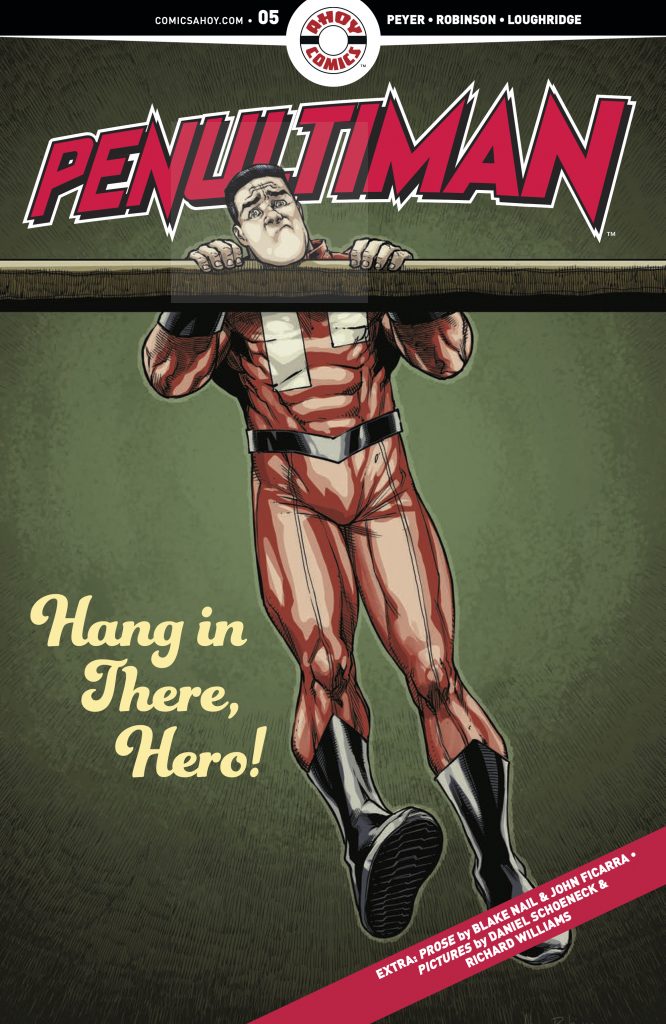 As we have progressed through Tom Peyer and Alan Robinson’s PenultiMan series, we have witnessed his dilemma.  It explores how the apparent shunning of PenultiMan by his own people became an almost impenetrable block he couldn’t penetrate. The fact that his adopted world seemed to embrace him gave him no solace. How could these people love someone whom his own people shunned? It also proved to be a major problem for AntePenultiMan who was built to help the hero in his work. How do you help a man who doesn’t recognize he own inherent goodness?

But it’s not like PenultiMan hadn’t  tried. The pile of self-help books he has gone through leaves a trail of his efforts for self acceptance. None of them seemed to take. And as frustrating as this was for the hero, it was just as frustrating for his robot aide. This drove AntePenultiMan to create an assistant for  himself to perhaps think of something he had not to cure him. PreAntePenultiMan helped him understand something that AntePenultiMan did not think of. And that was the idea that PenultiMan might need to be completely broken down before he can be built back up. So that’s where we are as we reach the 5th and final issue.

Issue 4 ended with PenultiMan ridiculing a crowd at a positivity gathering. He derides the crowd until they are positive alright. They are positive they are ticked off at PenultiMan. He turned what once was a peaceful assembly into an angry mob. Never get in the way of a person’s search for positivity. They quickly grew angry at him for ruining their chance of feeling good about themselves. Well welcome to HIS club. 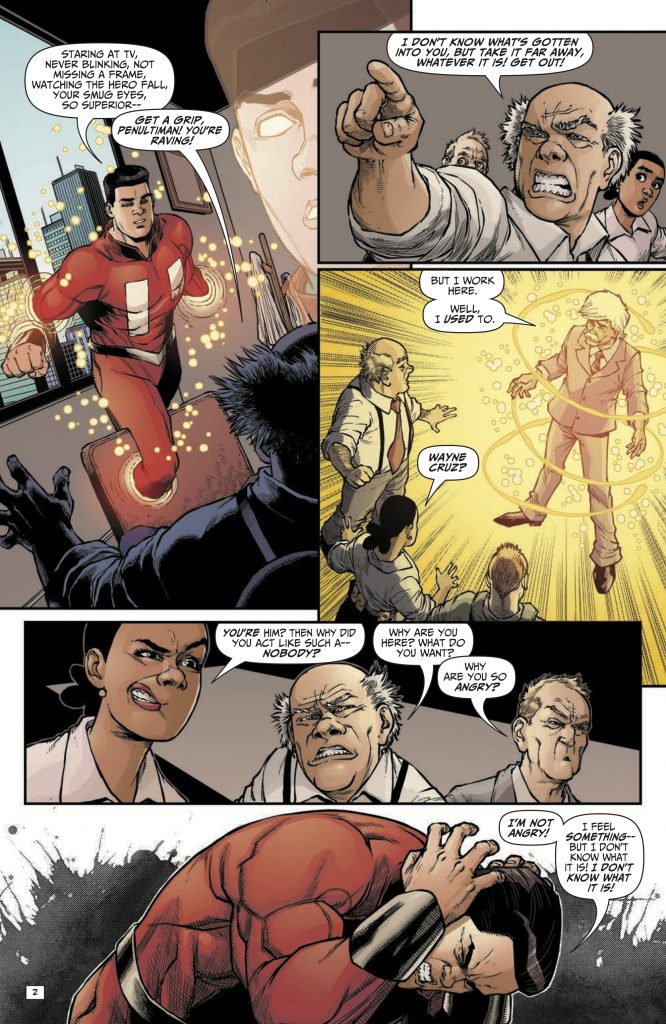 Soon, as his former teammates at the FBI are watching the footage of the violence at the Positivity gathering, they ponder what has happened to PenultiMan? Concerns of whether their one time hero has lost it. Is he one banana short of a bunch? Does his cord not quite reach the outlet? Is the wheel spinning but the hamster is dead? This seems to be confirmed when PenultiMan phases through the wall questioning why they dare to judge him? He is obviously struggling which brings AntePenultiMan to the party to retrieve his troubled boss and him away.

This leads to the trial of PenultiMan. As overseen by AntePenultiMan and his jury of one PreAntePenultiMan, he must answer for his contempt for homosapiens and for his emotional crimes against himself. Man…what kind of world is it when you can’t even have self-pity without having to face prosecution. The answer is Tom Peyer’s world. But for now, AntePenultiMan is the judge. And he runs a tight court. At first, PenultiMan takes umbrage with the whole premise. He would not be judged by a non-living entity. Certainly not one he created. He soon finds out that he did not have a choice. He was locked in a cabinet for the foreseeable future. If 87,998 years is considered the foreseeable future. 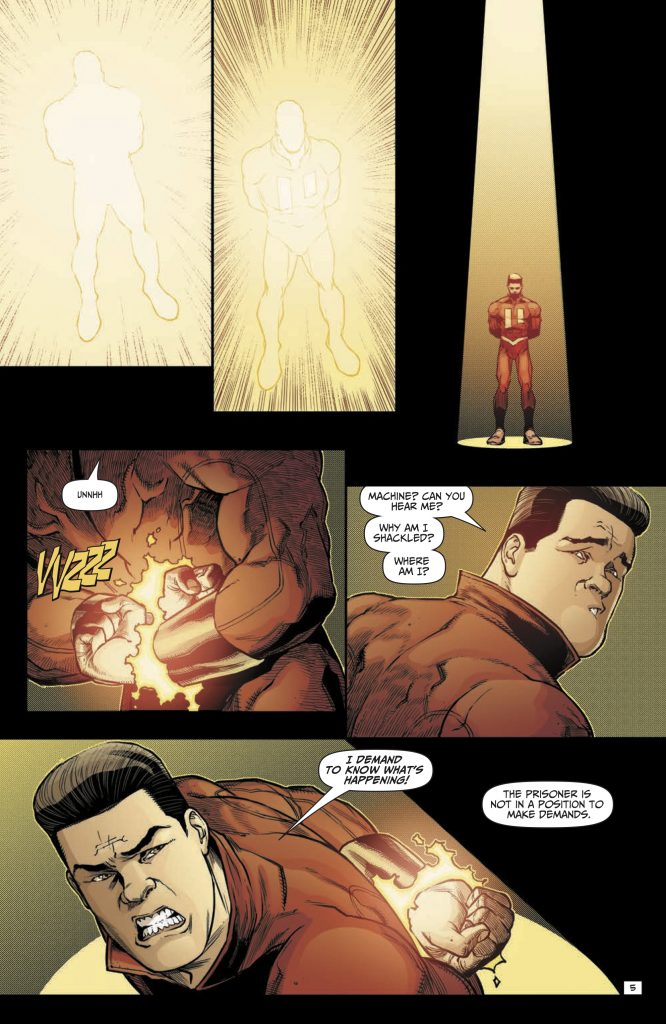 When his box is opened, he finds himself back home. His parent Geg-Roxiplax is there to greet him. And while he questions why his son is there, Geg conceded to his wishes for a hug. PenultiMan finds solace in the arms of his parent and a superior being. During this time, he flashes back to when he was young. How he was not allowed to interact with the other “ultimate” inhabitants of the planet. The way his humanoid body was a source of nausea for his parent. And though the use of his “brute” physicality was frowned upon (unless he was performing some service to his parent) he still believed that a “parents tolerance was a treasure forever.”

A Need for Inferiority

This realization was what his parent needed to understand. Or in reality, what AntePenultiMan needed to hear. It wasn’t that PenultiMan struggled with Superiority, he actually embraced it…as long as it was someone else that embodied it. He was happiest when he was inferior to someone else. Which is kind of backwards when you think about it. With that knowledge in tow, AntePenultiMan knew what to do now. He and his creator would change places. He would become the hero and PenultiMan would become the robot assistant. This would also allow for them to try to reconcile the heroes reputation with the public.

It was time for a PR stunt. The cover story would be that all of the misdeeds that had transpired recently were the actually the actions of his misbehaving robot backup. The one that he had left to handle things while he was away. But fear not, he would take his miscreant servant away and dispose of him. Then and only then, would he make it his mission to regain the people’s trust. Seemed reasonable.

As they left, the NEW PenultiMan told the new AntePenultiMan to take a look at the public, for he would never see them again. When asked if that was only meant to continue with their ruse, the former PenultiMan was told him no. It actually was because his former assistant was ashamed of him. Because he was so backward (see…I told you). And after everything that had happened, that was OK with him.

A fitting end to this tale without the book slamming shut. It’s ironic that the hero who was so devastated by his exile from his home world for his inferiority, only wanted to return to that inferiority. The fact was, PenultiMan was superior. At least among his adopted world. And that was ok too. Superiority doesn’t preclude service. He might have considered what Roger Zelazny said in Lord of Light: “…a man may in some ways be superior to his fellows and still serve them, if together they serve a common cause which is greater than any one man. I believe that I serve such a cause, or I would not be doing it.” That was PenultiMan’s initial thought upon his arrival. He would serve that cause.

But eventually, that “cause” would prove not to be enough. That’s when the self-doubt kicked in. The problem became, when you are superior to everyone else (at least on Earth), who do you go to when you have a problem? Certainly not to those who are inferior. Nor to the robot you created, for he would not have any more knowledge than what you gave him. So if YOU couldn’t solve the problem, what hope did HE have. In the end, he was happier just being inferior. Inferior beings weren’t EXPECTED to have all the answers. There was comfort in that.

This was another great Tom Peyer series. He has shown time and time again that he can entertain with comic chops as well as action while giving his readers serious food for thought. Who else but Tom could mix in lessons about self-worth and mental health while saving the world and defeating the bad guys. While also leaving room to continue the story. That’s a hint, Tom. But if you’re going to make that attempt, you need an artist up to the task.

That is where Alan Robinson comes in. His ability to mix whimsical situations along with the typical superhero action is unparalleled. I never get tired of his use of facial expressions as he portrays anger, frustration and sheepishness with equal aplomb. In fact, I have just about gotten to the point where I can recognize Alan’s work without knowing he did it. That’s about as big a compliment as I can think of. It’s the same category I had with Kirby, Buscema, and Romita, Sr. I just knew their work. But don’t let that go to your head Alan…I’m just a lowly reviewer. I carry a lot of weight around here…but not the right kind.

So now that this series is over, now what? Thankfully, Tom has left an open door for future adventures. It’s not like what was done couldn’t be undone. This is a comic after all. It’s in their DNA to revisit things. So here’s hoping for a future visit with PenultiMan…in which ever version that is. Issue 5 of Ahoy Comic’s PenultiMan comes out February 17th, which happens to be my wife’s birthday. How nice of Ahoy to celebrate in such a grand fashion.