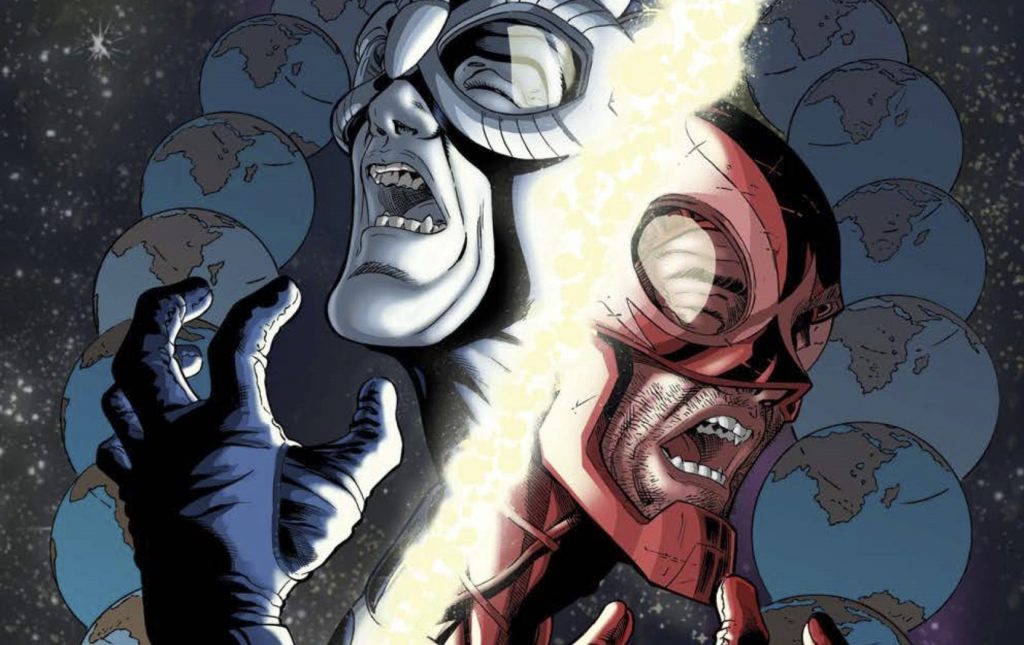 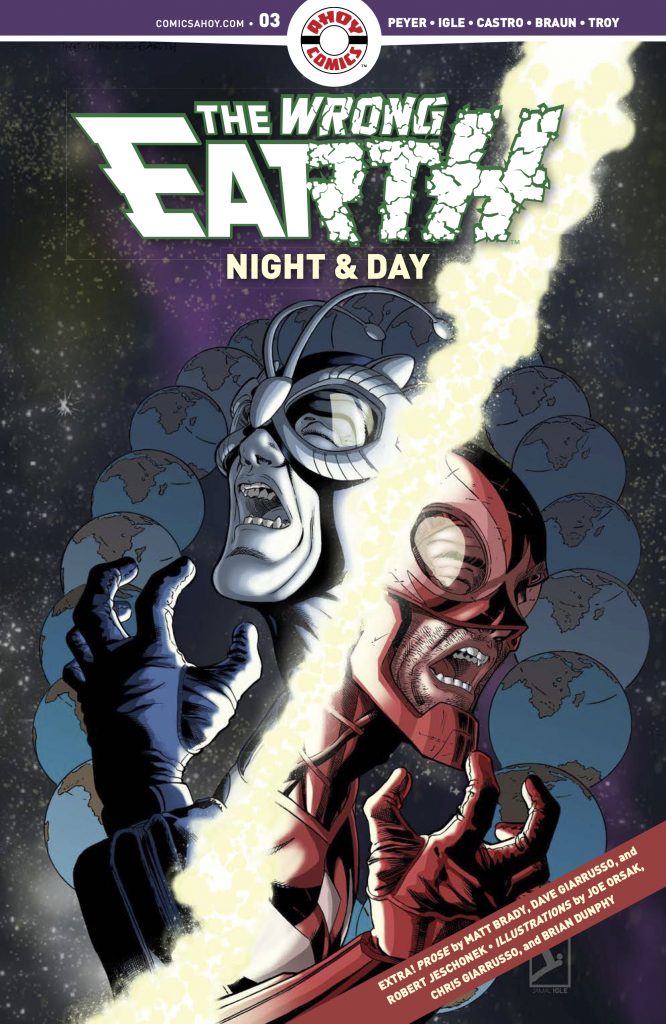 When those mad geniuses writer Tom Peyer and artist Jamal Iggle gave us Dragonfly and DragonFlyMan Season One, they created a rip-roaring tale of fun.  Two mirror image heroes who couldn’t have been more different. It was like 66 Batman vs The Dark Knight Batman. But then Tom and Jamal  did the switcheroo and put them on each other’s Earth. For over a year, they lived each other’s life.  DragonFly learned to adapt to the more colorful villains that DragonFlyMan dealt with while trying NOT to kill any of them. He also learned to work with his new young helper Stinger.

While DragonFlyMan…well he did the best he could. Although I’m sure DragonFly’s enemies appreciated not getting seriously beat down or killed. When the smoke cleared, it was a given that after Season One, there was more to tell.

So now with Season Two, Wrong Earth: Day and Night they have continued to up that ante. After being on their doppelgänger’s world for a year, our two diverse heroes have found themselves literally side by side. Captured in their efforts to defeat an unknown enemy on the third Earth, who was polluting the other two Earths. But why did they get apprehended? Because Mr. Peyer said so? Well yes, but that wasn’t the only reason.

As one might expect when you have two heroes with such opposing methods, you might have conflicts. Mainly because they couldn’t decide how to proceed. Kill? Don’t Kill?? Incarcerate? KILL??  (Did I already say that?) Well now they are shackled side by side, awaiting their fate. Can they escape? Will they resolve all their deep seated anxieties and relationship issues? Will Dragonfly reveal his muscle building training techniques to DragonFlyMan. (Ok, I just threw that last one in). Only by reading Issue 3, will those answers become clear. Ok…clearer. Reasonably opaque. 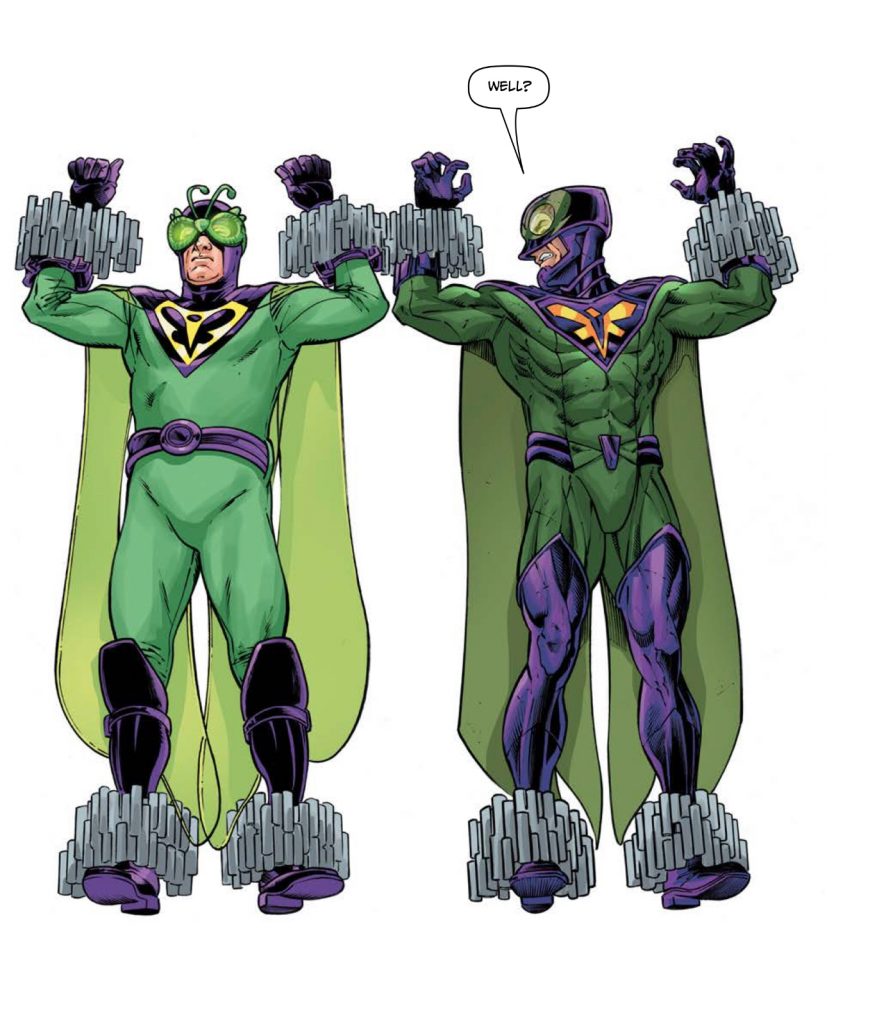 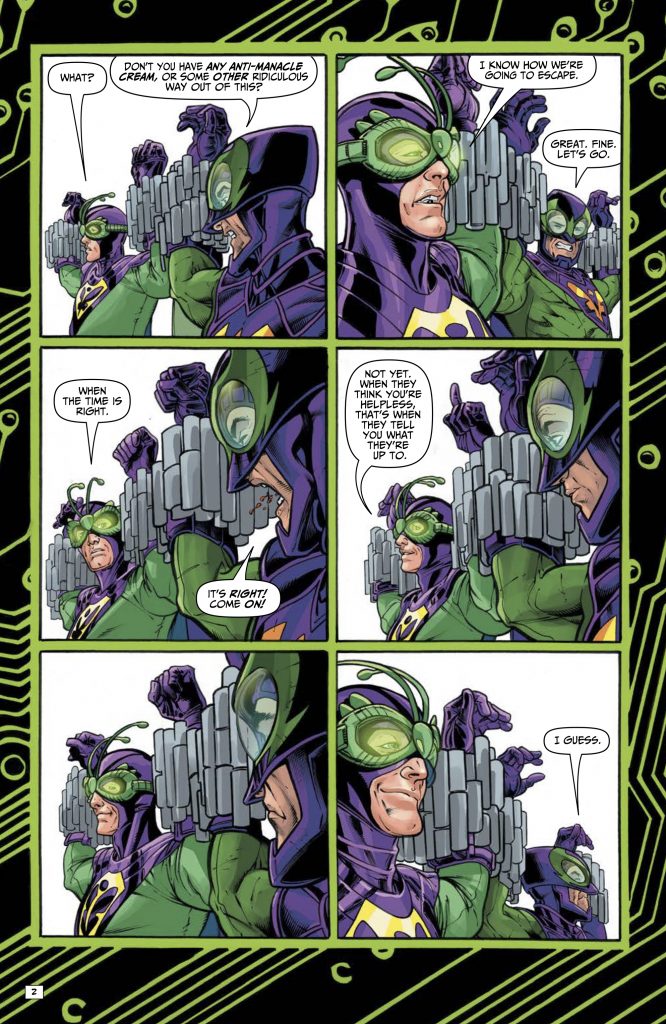 As you can see by the two sample pages, our intrepid heroes still have vastly different ways of handling things. Even when it comes to escaping captivity. DragonFly is a direct approach kind of action hero. If you can escape a predicament, the you should just Damn well do it! There is nothing to be gained by remaining shackled or restrained when it is not necessary. DragonFlyMan is from the old school where villains can’t WAIT to tell you what their deep laid plans are. Because of that, there is a strategic advantage to be gained by remaining in the evildoers clutches. Dragonfly has a word for that kind of thinking. It rhymes with Pull Spit. But our wholesome hero was correct. 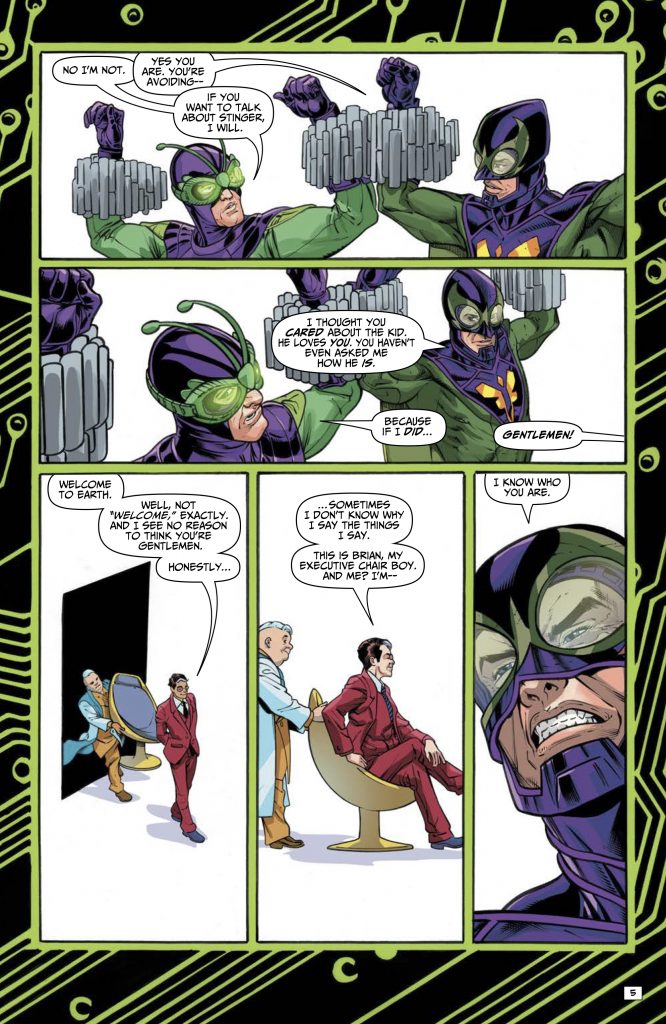 The Villain, Number 1 Prime, could not wait to relate his origins and his tale. How he had made the inter-dimensional mirrors that allowed one to travel between the different Earths. And how he was introduced to his OWN doppelgängers. Together, he(they) decided to funnel all HIS earth’s pollution off to the other two worlds. His world would thrive and make him healthy, wealthy, and even more wealthy. The other two Earths? Well, they were struggling anyways. What’s choking on more noxious fumes and bad water going to do that they haven’t already done to themselves? Besides, his two captured adversaries could not do a thing to stop him. Especially since he had an ace in the hole. He had captured young Stinger, DragonFlyMan’s teenage crime fighting apprentice. Well THAT was rude!

He explained that while he held Stinger, they would work for him. He would send them back to their perspective worlds. There they can fight all the villains they wanted. Provided they protected HIS interests and his Mirrors. DragonFly, for one was fit to be tied…or shackled. He had grown fond of the lad during his time on Earth Alpha. Number One Prime had made a big mistake as far as HE was concerned. Now DragonFly was going to have to kill him. What a shame. However, after hearing Prime’s dastardly plan, DragonFlyMan had heard enough. Because just as DragonFly expected, DragonFlyMan did have some tricks up his gauntlets. He immediately broke free and jumped into the fray.

As he introduced Number One Prime’s henchmen to his most lethal, non-lethal weapons, DragonFly was demanding to be cut free. However, that was not going to happen as long as he didn’t say please and thank you. Not to mention his use of bad language. Instead, DragonFlyMan cut young Stinger loose and together they put the vile villains down for the count. Once the fight was over, Stinger turned to DragonFly and asked him a shocking question. He  wanted to know…if you have read this issue so you would know what he asked. That is what we call a teaser and leads to the upcoming issue Four.

This series has been so much fun since it started with DragonFly and DragonFlyMan. The differences between the two world’s heroes were diverse but still maintained a common thread that anchored them. But throughout the first season, it begged the question of what would happen when the two mirror images came together. Of course, that is what Peyer and Igle gave us in Wrong Earth. The conflicts that have transpired upon their meeting has been as one might expect. But there is one thing I’ve found fascinating. And that is it almost appears that DragonFlyMan, who would appear to be the less dominant figure, appears to be the more Alpha Male of the two. Who would have thought? Writer Tom Peyer obviously did…but who else?

By now, readers of this series have grown accustomed to the storytelling excellence of artist Jamal Igle and his work on this series still stands on its own. But in issue 3, they recruited Russ Braun to step in and illustrate pages 7-14 and that worked very well. In fact, other than it was basically our villains back story which had its own subtly different look, you might not have noticed the transition. Which was probably the point. Either way, well done Messieurs Igle and Braun. Well done.

So now, we have some more questions to answer. Now that the possibility of going back to their perspective worlds is available, what will our duo of intrepid heroes decide? How will young Stinger figure into their deliberations? Stay tuned for Issue 4 to find out. Ahoy Comics The Wrong Earth: Day and Night, Issue 3 is available where all great comics are sold.