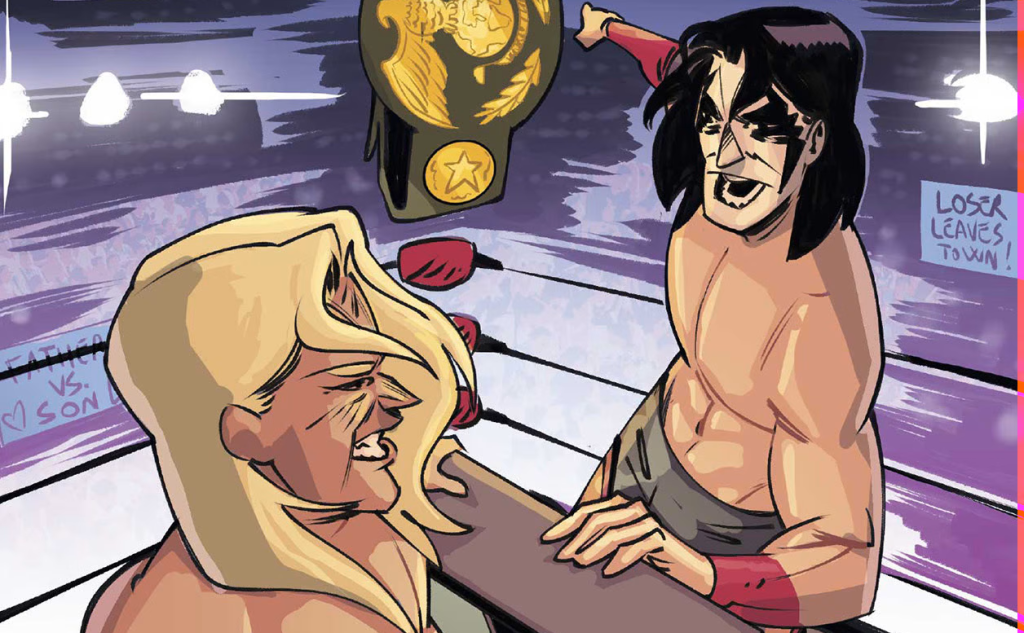 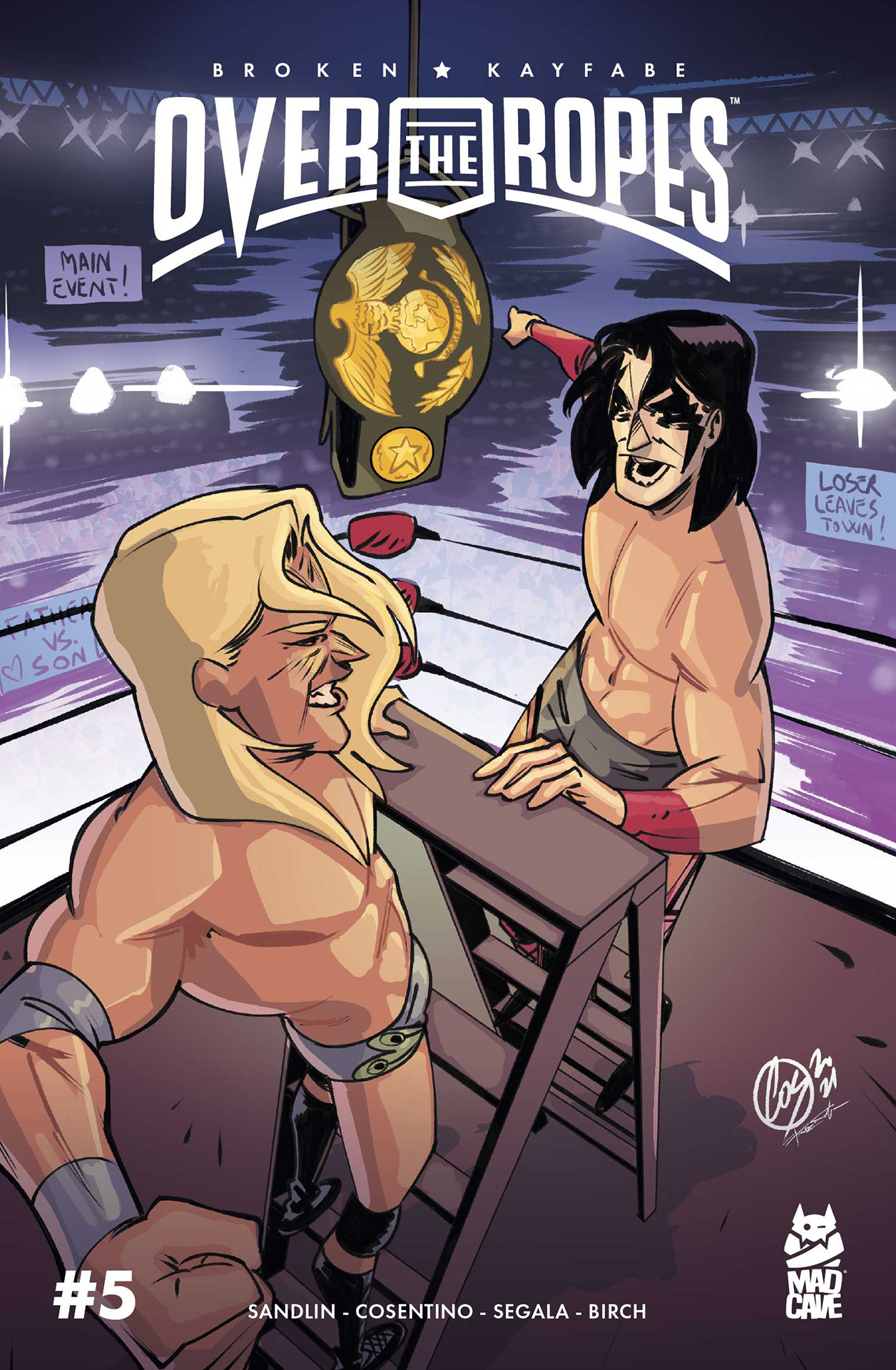 When we last left our show, Phoenix/Jason had come to terms with a lot of personal drama behind the scenes. He had reconciled with both his best friend The Blue Bomber and his girlfriend Courtney. Now all he had to deal with was the simple matter of a loser leave wrestling forever ladder match with his estranged father. No pressure in that. None at all.

The scene is set with Jason agreeing to an interview with wrestling insider and general pain in most wrestler behinds, Dirt Sheet writer Bill Feltman. This is AFTER the big match had concluded. Feltman wants Jason’s side of what happened, so he agreed to Jason’s request for a low-key setting. The fact that he also gets fed was a bonus as far as Feltman was concerned.

As far as the match was concerned, it was every bit as hard hitting as one could expect with such stipulations involved. Plus, if anyone had followed Buddy Peacock’s career, they knew he would pull out ALL the stops. If that involved bending the rules, then so be it. Of course, in a no DQ match, there really weren’t ANY rules. No one took advantage of those guidelines better than the 17-time champion. As Thanos said about the Collector when it came to lying, Cheating for Buddy Peacock “was as natural as breathing.”

Throughout the match, the conversation in the ring was not your typical hints of chain moves. This was more personal, more brutal. Kayfabe was being not only fractured but shattered like a stain glass window. At least as far as the combatants were concerned. For the fans, it was, as the much quoted (by me anyway) Jim Ross would call: a Slobberknocker!” Especially when Peacock told Jason that he probably didn’t remember his mother because she wasn’t “Memorable Enough.” “DON’T YOU TALK ABOUT MY MOMMA!” (It was good enough for The Little Giants, so it was good enough for me.)

If there was one thing about having Buddy Peacock for a father was good for, it was having ample tape to study his style and what he likes to do in a match. Jason had studied his “dad’s” every move in the ring. Every suplex, every drop kick, every chest chop. That also included every type of “dirty trick” that Buddy had used. Throughout his study, he realized one thing about Buddy. He was predictable. So, it was not a surprise that Buddy brought in reinforcements. Not exactly the Four Horsemen but they were bodies, and they could do some damage.

But as Buddy’s henchmen engaged Phoenix, that knowledge of what was likely to happen came into play. Into the ring came the Phoenix Squadron to even the odds. This gave Jason an opportunity to stop “dad” from climbing up and claiming the belt…. barely (so to speak). Now Jason is in position to grab the belt and win while the mayhem in the ring continues. That includes the sudden appearance of the recently suspended Yuri (for her actions in Issue #2), climbing up through the mat like a member of the Walking Dead. She topples the ladder and puts a stop to Jason’s claiming of the strap.

That, of course, brough Scorch into the action to intercede against Yuri in defense of Phoenix (ahhh…young love!) Soon, both Scorch and Phoenix have their opponents in submission holds. Scorch with the Gene Labell crossface on Yuri and Phoenix with a “Phoenix” deathlock or “sharpshooter” on Peacock. At least until Scorch reminds Jason that he can’t win the match by submission. He’s got a ladder to climb.

However, things are seldom easy in these kinds of matches, especially when the number of Peacock’s henchmen seems never ending. In this case, Peacock’s personal bodyguard Power Train makes his appearance, once again pulling Phoenix down from the ladder and giving him a chokeslam for good measure. As Peacock once again begins the slow climb up, another wrestler enters the fray. This time, it is Phoenix’s new friend and one-time nemesis “Roll Tide” Billy Radison. He pulls a shock stick and electrocutes Power Train and follows it up with a “Roll Tide” Stunner. When his father, SFW owner Ricky Radison asked him from ringside what he THOUGHT he was doing, Billy informed him that he quit.

As grateful as Phoenix was for Billy’s assistance, Billy repeated Scorch’s warning to Jason. He had better climb that ladder because Buddy was about to end his career by grabbing the belt. Once again Jason grabbed Buddy just inches from victory. His father tried to “emotionally” appeal to his son. Jason was right. Buddy would be nothing without the belt. His heartfelt appeal was followed by his attempt to poke his fingers in Jason’s eyes. But just as Jason had told his dad, he was nothing if not predictable. Jason blocked the attempt and thanked him for showing him how NOT to behave. Right as he knocked him off the ladder and grabbed the belt. Phoenix was the unified champion and Buddy Peacock’s career was ended.

After Jason finished his story, Feltman asked him if he thought that his father would honor his word. He wouldn’t be the first wrestler who lost under those stipulations and somehow returned. But Jason believes that his father was retired from wrestling. But as for Buddy’s performances, the “Show” will go on. There is ALWAYS money to be made.

Just as Jason was getting ready to take his leave, Courtney showed up. Feltman was working on a banana split when he asked her where “Scorch” had been. She declined to answer but left him a closing statement, dumping his banana split over his head for the sexist articles he had written about her in the past. Feltman took it in stride. On the plus side, the dessert was really good.

Over the Ropes: Broken Kayfabe was another well-done homage to the world of wrestling. Writer Jay Sandlin went all out in the final issue, touching just about every possible scenario seen in a major pay-per view event. Narrow escapes, both heel and face interventions at every turn, and even Yuri climbing through the mat. If this had been an actual pro wrestling event, the fans would have gone home happy. Jay brought it in strong and finished it well. The championship belt belongs to you Mr. Sandlin.

By now, artist Antonello Cosentino has got this wrestling thing figured out. Capturing hard hitting action, with chest slaps, suplexes, drop kicks, clotheslines, stunners and power bombs. All with enough energy and accuracy so that fans could call the action themselves. Although, I’m not sure if that is a testament to Cosentino’s artistic skill or our own wrestling geekdom. Either way, for two full volumes it has worked to perfection. Kudos to the whole creative team for a job well done.

Mad Cave Studios Over the Ropes: Broken Kayfabe, Issue 5 by Jay Sandlin, Antonello Cosentino, Francesco Segala, and Justin Birch can be found on Mad Cave’s subscription site. Those who subscribed to the series will receive the printed TPB, which will also be available in comic shops December 28th.