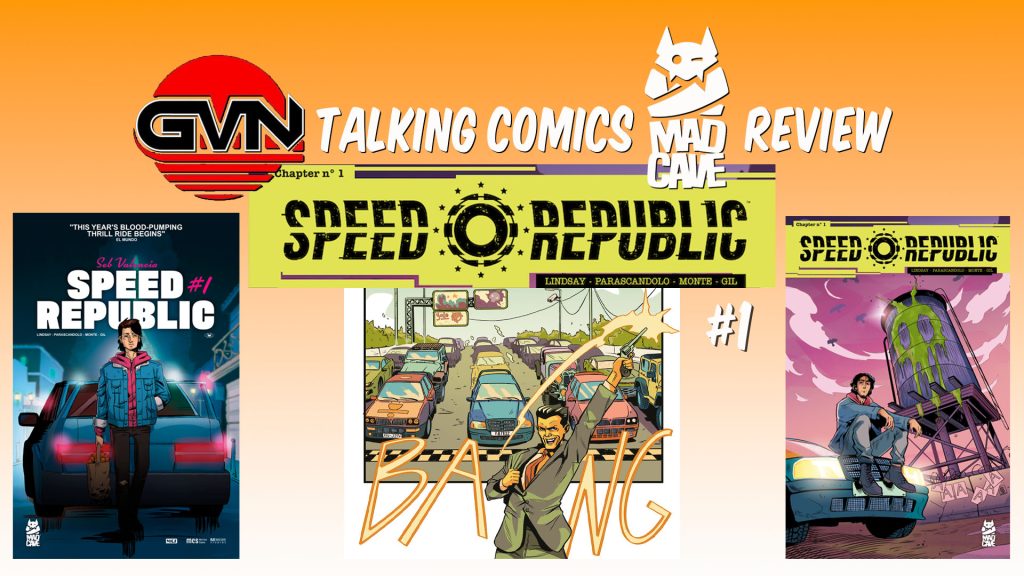 In an apocalyptic world full of have nots, it is pretty much everyone’s dream to be one of the select few of the haves. But it is a fleeting dream. Unless of course you are fortunate enough, good enough to win the Grand Race. An over 1,300-mile journey with the mostly like outcome being your own demise. It is the brainchild of the man known as the Autocrat. He holds the Grand Race once every year. It serves to give people something to look forward to. Whether it be to watch the carnage, or perhaps some way, somehow, come out victorious if you decide to enter. Because only one can person can be the winner and gain the notoriety and prestige that comes with it. Not to mention the wealth. That is what young Sebastian Valencia hopes to make his. But first, there’s a race to win.

Winning is the ONLY Thing

This is the premise in Ryan K Lyndsay’s and Emanuele Parascandolo’s Speed Republic. An explosive combination of Death Race 2000, a demolition derby mixed with The Hunger Games. Just as is common in an apocalyptic world, one man rules the roost, the Autocrat. There is one thing that is as sure as the sun coming up every day. A fact that most racers would tell you when it comes to The Grand Race. The Autocrat plays the fiddle, and everyone else must dance to his tune. Especially if you have plans to survive. No one knows this better than Sebastian. And in Speed Republic, that means that it’s every man and woman for themselves. With that in mind, it probably doesn’t benefit you to try to make friends here. Mainly because you would either lose them, or you would be stabbed in the back by them. Lyndsay and Parascandolo make this clear right from the start, laying the groundwork for what looks like a wild and twisted ride. Already by the end of the first issue the theme is quite clear. Blood is NOT thicker than winning.

One of the strengths of Speed Republic is the way that writer Lyndsay brings the reader up to “speed” using a running and insightful narrative from the main character Sebastian. Explaining the atmosphere of where things stand and why the Grand Race might be salvation for some, and a cruel end for others. To bring it to life, artist Emanuele Parascandolo applies his prodigious talents to great effect along with colorist Michele Monte. Together, they do a great job of balancing the drama along with the race action. And to think, its only issue one! A pretty strong start for the series and showing such a great promise for what is to come. I give Speed Republic a solid 8 out of 10. For any opening issue, that is strong foundation from which to build on. Mad Caves Speed Republic hits stands on February 2nd, 2022.