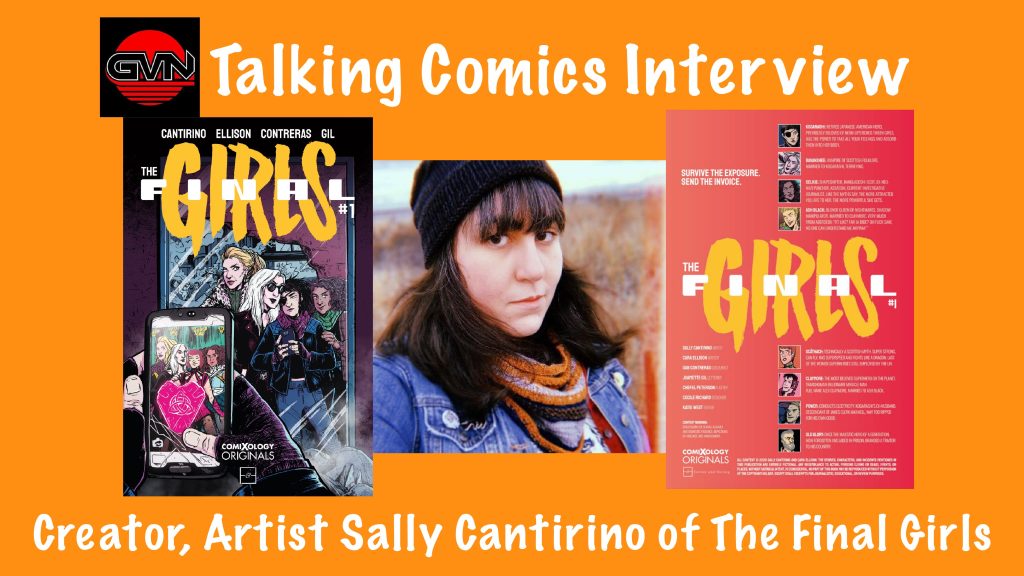 When it comes to the adage, “if you want something done right, do it yourself,” Sally Cantirino could be the poster child. She has been self-publishing since her teens. These days, her work has garnered enough attention in series like Last Song, Dead Beats, and I Walk with Monsters that she no longer has to self-publish if she chooses not to. One of her latest projects (although it actually started in 2015) is her collaboration with writer Cara Ellison called The Final Girls, which comes to ComiXology on March 30th. So let’s welcome artist Sally Cantirino to GVN’s Talking Comics Interview.

Introduction to The Final Girls

GVN: Thanks for giving us some of your time, Sally. You have been producing great comic art for some time now. What was it about The Final Girls that “drew” you into the project?

SC: Katie [Editor Katie West] reached out to me after a mutual acquaintance of ours passed my name and portfolio along. I was apprehensive at first, because I wasn’t sure if my style would be suited for a superhero comic. But all those off-beat Vertigo books– like Shade The Changing Man, Doom Patrol, and The Invisibles– were part of my path into comics. And the reason I loved those comics as a teenager were because they were so different visually. There were also themes in the book that were things that I had reckoned with personally in my own life and career. The kind of things that had almost burned me out of comics during the year before we started working on The Final Girls.  Cara’s writing handled those themes and the characters in the story with care and honesty. 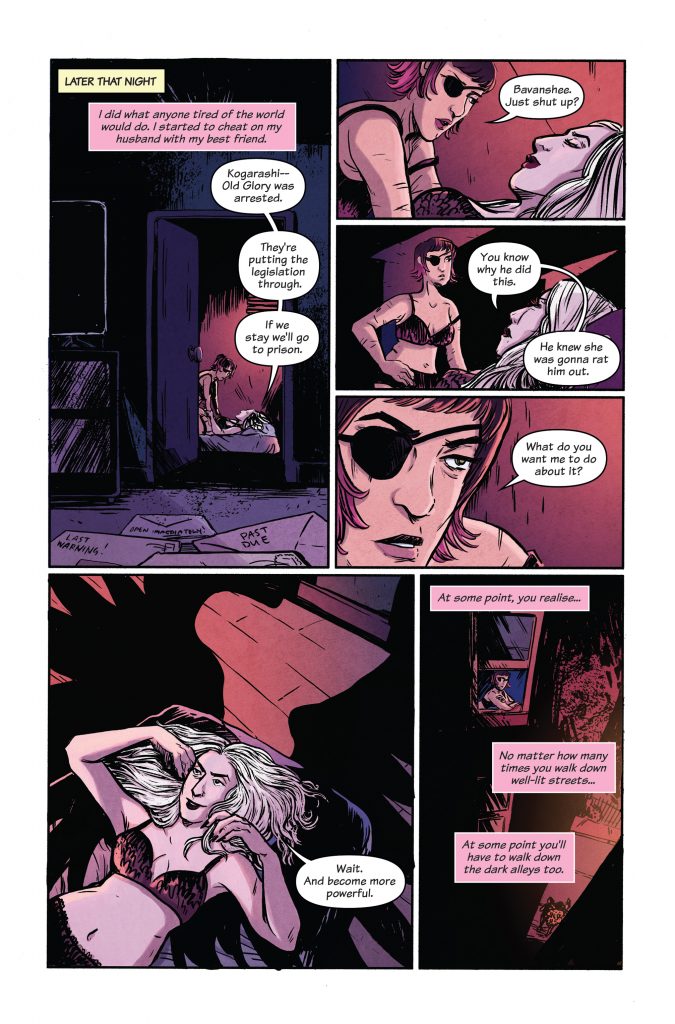 GVN: Did Cara give you an outline to follow for the series or a full script to work from? What was that collaboration like? I believe this was Cara’s first creator owned comic project.

SC: Cara and Katie gave me a full outline for the full story early on, and Cara wrote scripts for each issue. Cara also provided me with references and specifics for locations for the scenes set in Scotland. I would turn in layouts and pencils for an issue, Cara and Katie and I would do some edits back and forth before going on to inks.

GVN: I showed my wife some panels from The Final Girls and the first thing she noted was the heroines were real women. And her point was they were not your common super heroine hour glass shaped women. She could relate to them by body shape and their almost sisterly bond. When it came to character concepts, what were your main inspirations for the “The Final Girls.”

SC: Love & Rockets was among some of the first comics I picked up as a teenager, and it was a huge revelation and influence on me. Reading it at 14, seeing Maggie, it was like “oh my god, she looks like me, her body looks like mine, her jeans rip look like mine!” So much of that comic is about intense friendships or relationships, and how they grow and change as well. 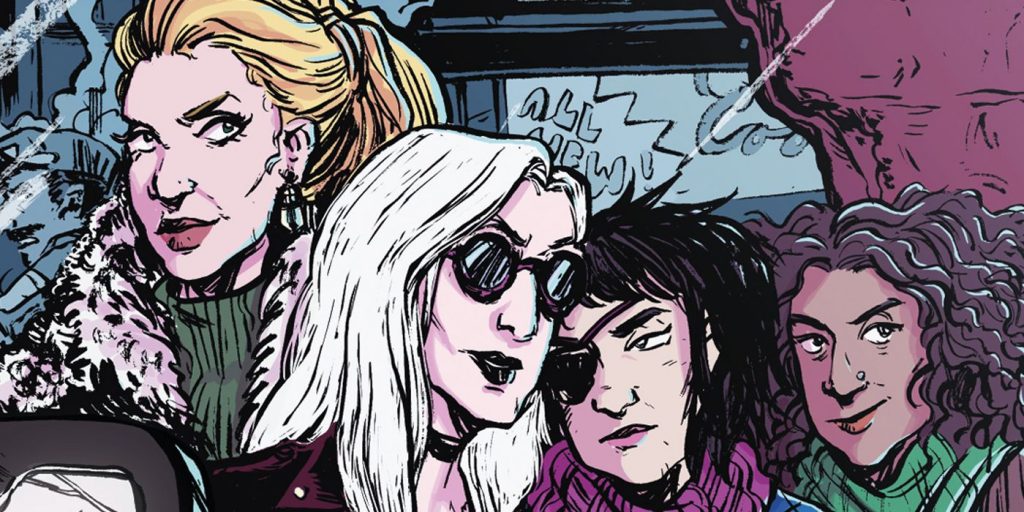 Some of the characters in the book had cultural influences. While some of the designs were just like– what is this woman’s personality, how do they move through the world, what’s their relationship with their powers and their backgrounds now? Ko’s look was based on a great haircut I saw on Rinko Kikuchi years ago. But with lots of protective layers to her clothing to separate her powers from the world. Bavanshee’s look was heavily influenced by Anjelica Huston and that classic “Vertigo goth girl” look.  Much like Kathy from “Shade The Changing Man” or Death from “The Sandman”.

Osua’s happier in her post-hero life out of the spotlight, so her look is casual, jeans and t-shirts and some Clark Kent glasses for her civilian look.  Selkie is a little more preppy and floral, and Ash has a bit of a sleek influencer style. I didn’t get to draw Scathach outside of costume much but I got to draw her in a Fair Isle sweater at least once, as a knitter that made me very happy.

GVN: You are working with a great team of powerhouse female & non-binary creators. From writer, colorist, letterer, flatter, designer, editor and even the various cover artists. Was this the plan for this project or a happy coincidence?

CS: Yes, I believe it was Katie’s and Cara’s intentions to put together a team like this, and they were an amazing team of people to work with. I feel like I grew a lot as an artist and a person, in both skill level and general confidence. It’s easy to end up feeling disposable as a creator, and it was something that had burnt me out a lot earlier in my career.

Right before I had started this book I was at a point where I was constantly like, “Well, I’ll do this one last project or book and then I’ll re-evaluate my life and quit comics because I’m tired of being broke and burned out all the time.”  Working on The Final Girls and with this amazing team brought me back from the brink in a lot of ways. We all cared for each other a lot. Gab’s colors always blew me away, Joamette’s letters and Cecile’s design senses were always spot on.

GVN: So when The Final Girls drops on March 30th, and it as well received as I imagine, Do you and Cara have any thoughts about continuing their story in the future?

SC: No, not at this time. I think we told the whole story we wanted to tell with these characters, in this world.

GVN: Speaking of the future, do you have any projects on the horizon that you can tell our readers about?

SC: I’ve got a full schedule but nothing I can talk about yet! I have two more issues of I Walk With Monsters, the horror comic I work on with Paul Cornell, Dearbhla Kelly and Andworld Design from Vault Comics– they’re coming out in April and May.

GVN: Thank you so much for your time, Sally. We look forward to the release of The Final Girls on March 30th, on ComiXology.