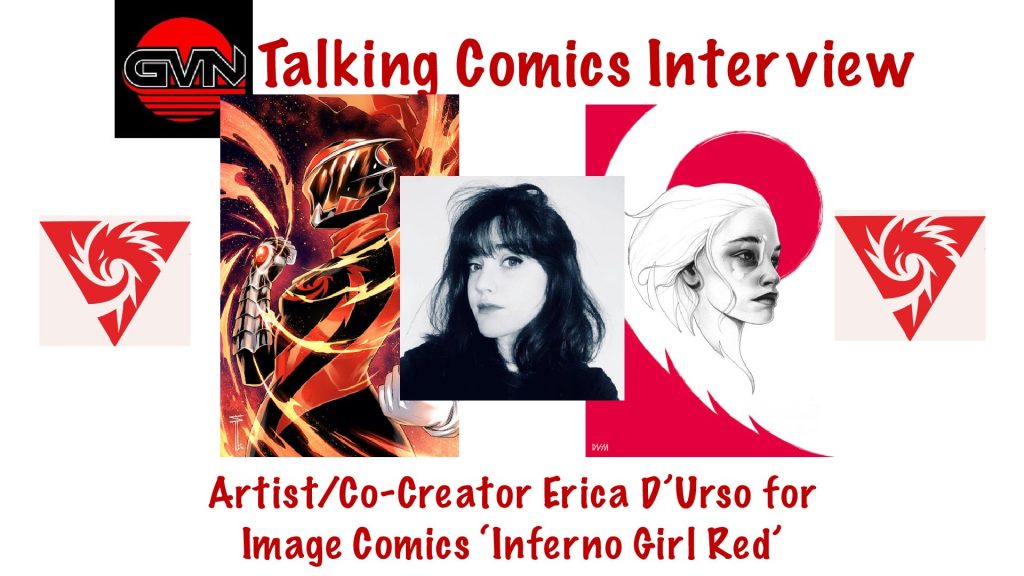 Another perk of this wonderful job is that we get to discover creators we might not have known about before. And more importantly, share them with you. Such is the case with Erica D’Urso. So when her Inferno Girl Red project was brought to my attention, I knew I needed to check her work out. And I am glad that I did. It is a fresh and exciting look and I see why writer Mat Groom gravitated to her. So without further ado, let’s welcome artist Erica D’Urso to GVN’s Talking Comics Interview. 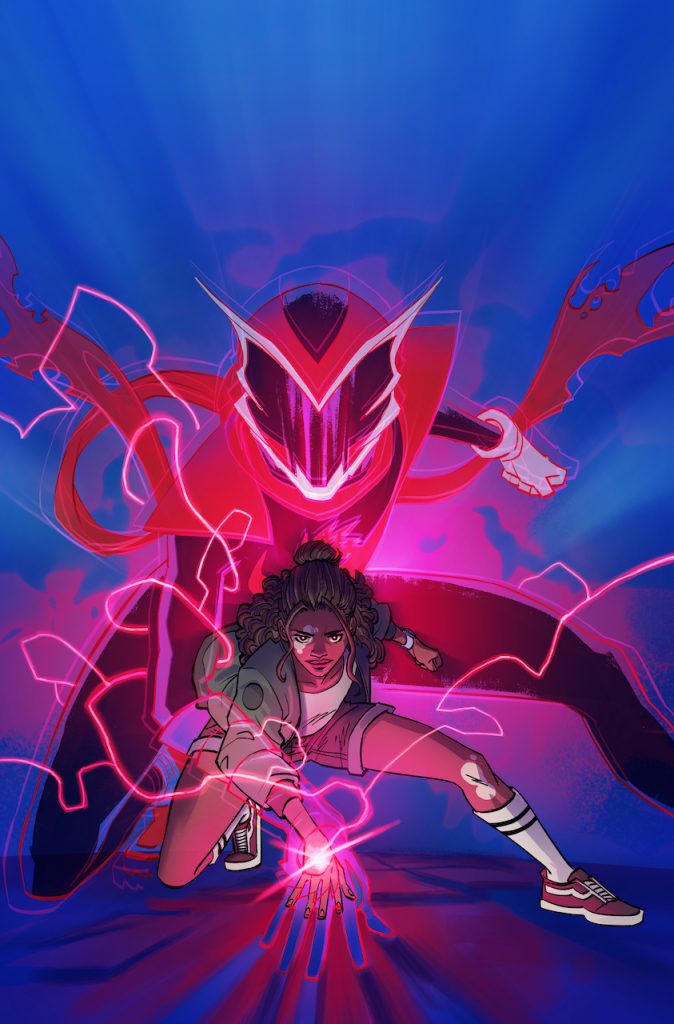 GVN: Thank you for giving some time Erica. So in case our followers are not familiar with your work (and I suggest they go to your Facebook page to check it out), what got you started into the art game and was Comic Art always your ambition?

ED: Thank you, I’m really happy to be able to share a little of me. Since I was little, drawing and reading were my only ways to interact or express myself. But, while I didn’t know that comics would be my path, I did know that I wanted to spend my life drawing.

An Interest in Comics

So, I attended an art school and only after receiving my diploma did I start to become interested in comics. It was only six years ago that I started to really dig into them, in particular American comics. In fact, I feel a little like a newbie with authors sometimes, I’m a late reader but a huge learner.

GVN: Which artists did you gravitate to? Whose style or which book made you think that you could do that?

ED: At first, I was interested in the French field. My very first reference artist was Joel Jurion. I still love his style, but with time my tastes changed a lot. Today I get inspiration from Mahmud Asrar, Pepe Larraz and Stuart Immonen.  But I have a secret love for the frantic dynamism of Daniel Warren Johnson and the greytones of Simone di Meo.

The day I decided to completely jump into comics in a more professional capacity, I was on the point of giving up. It was a dark moment of my life. A time where I thought I had thrown away many years avoiding and forgetting my dream of a full-time job as a comic artist.

That day I remember I saw a Spider-Man comic of Sara Pichelli and thought “I want to be good almost half like her” and the same day I found out that she was teaching in a comic school in Rome, Italy. It would mean I would have to move to another city, live alone, but in that moment I finally knew what I wanted and I wasn’t scared at all.

GVN: You have done work for Marvel, Image, and Space Between Entertainment. Do the companies you have worked for differ in how they allow you to work and how much collaboration have you had with your writers? I had originally assumed that all artists worked with their writers but I have found out not necessarily.

ED: Yes, for example I worked with Pat Shand on Prison Witch for Space Between Entertainment and he was both writer and an editor figure for me. We often talked about the script and there was a more direct connection compared to other bigger companies like Dynamite or Marvel (in which I was in touch only with the editors).

To be frank, I’m glad to be part of a co-creator project, because my participation is more satisfying, at least for a creative mind like mine.

But to speak in favor of bigger companies, I understand that being totally involved, as for us in Inferno Girl Red, in a complex and frantic setting is pretty difficult. And the editors I worked with were always 100% collaborative and nice. 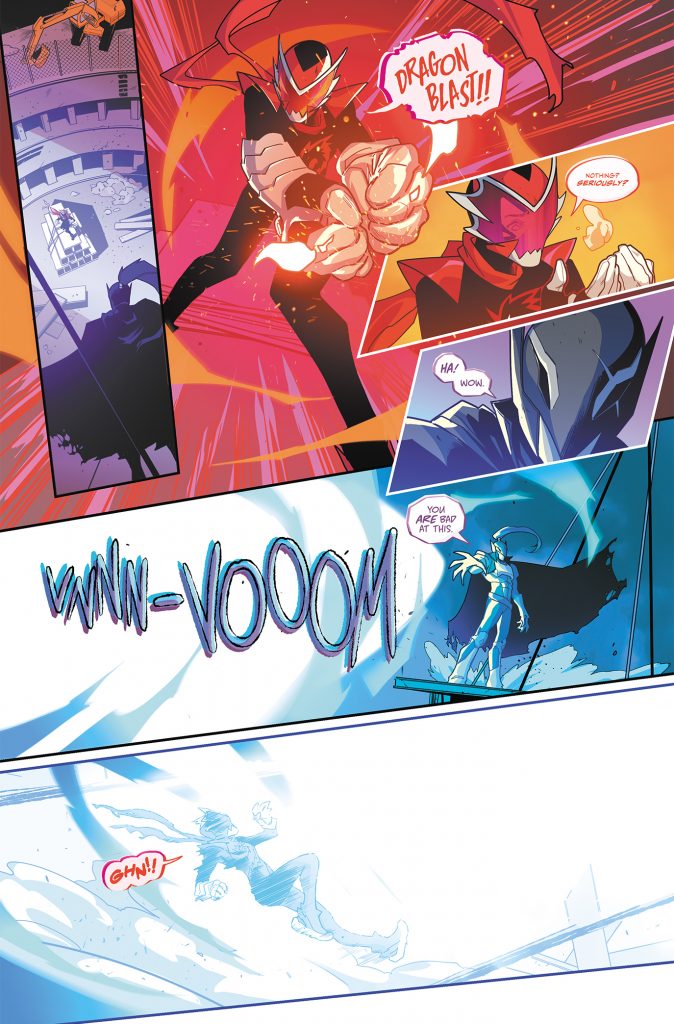 GVN: So you are working with writer Mat Groom on your new title Inferno Girl Red. He certainly is excited about working with you. How did you two get together and how did he sell you on taking the project on?

ED: Mat is a great colleague and he always has been comprehensive and empathetic with me, so even if we haven’t known each other for very long, I would say he’s a friend. I didn’t know him before he introduced himself, and I only knew Kyle through the Power Rangers series. But once I read the pitch, I was really drawn to the idea and months passed as we created designs, ideas, my mind was really productive.

One day, Mat wrote and said there wasn’t need to do any more samples, because he was sure I was the artist he was looking for. Well, I’m really emotional, so that day I cried a lot. For the joy. 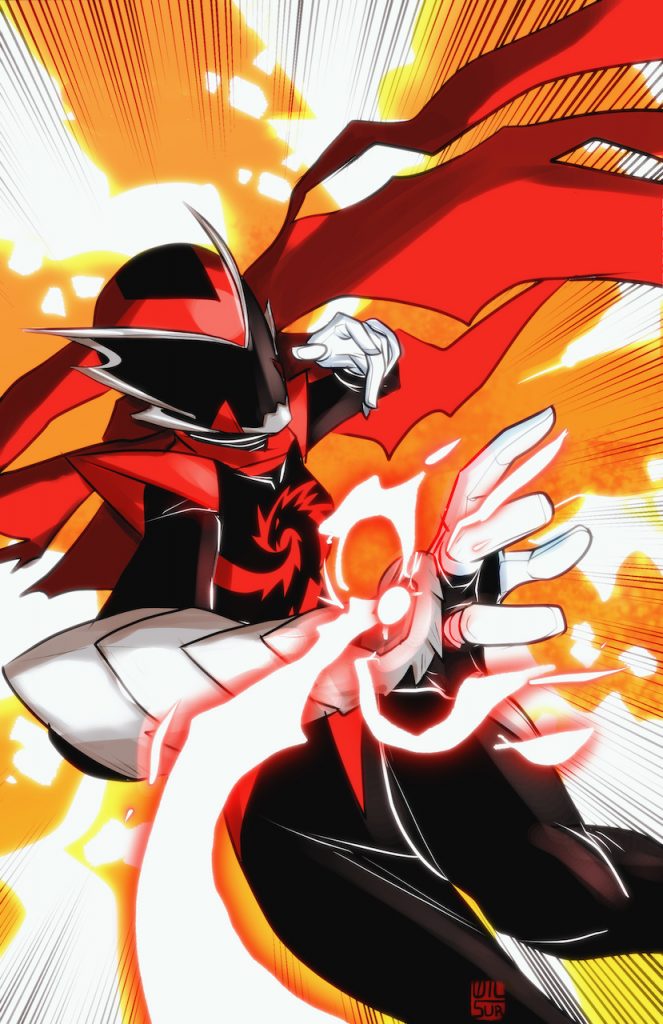 GVN: You have the prodigious color talent of Igor Monti working on your “pulse pounding pencils” (as the folks at Marvel used to call them back in the day) and inks. Had you worked with Igor before?

ED: No, but I knew him for some time. I followed Igor for common friendships on social media and I always appreciated his work. But I never imagined we would be able to work together. My expectations for the result have been largely exceeded thanks to Igor.

I always had trouble finding the right fit with a colorist, because most of the time I can’t choose the colorist myself. But with Igor there was instantly a good synchrony and we both enjoy the same influences.

GVN: You have started the Kickstarter Campaign for Inferno Girl Red. Is this your first experience with Kickstarter? If so, what do you hope to accomplish (besides funding, of course)? These campaigns have proven to be great ways to connect with fans. Especially with ComicCons on hold since last year.

ED: This is my third experience with a Kickstarter. I drew Prison Witch and Prison Witch 2 for Space Between Entertainment. Both of them were funded by a Kickstarter campaign, even if with a smaller goal amount.

But my hope is to reach enough stretch goals to show you what we thought for the backers! I’m sure they won’t regret it. I also think that creating these add-ons is a way to communicate with them as best we can for the situation. I really miss ComicCons, because it’s the moment you face real people who read or see your work. Although it is still nice to have fans, without the Cons everything remains behind a screen and sometimes, speaking personally, you feel a little lonely. ComicCons are like my battery charger!

Dreams of a Character

GVN: Thanks once again for sharing your time with us, Erica. One last question of the hypothetical nature. With your work on Inferno Girl Red, your artistic dance card is suddenly very full. You have the choice of any character or book. Which book or character have you always wanted to take a swing at?

But it would be cool if it would be Spider-Man. I didn’t know who I would be, but my very first comic was a Spider-Man collection sold with a newspaper. I was only 13, but I remember I was drawing the iconic John Romita Jr. Spider-Man under the rain, dreaming to be able to draw one on my own. Being able to draw a Spider-Man would be like turning into that kid again and make her dream come true.

GVN: That was a great answer and who knows? With your talent it might happen one day. Thanks so much spending some time with us and we will be following Inferno Girl Red and the Kickstarter with great interest. Also, check out our interview with Erica’s Co-Creator and writer Mat Grooms found here.