Notes on a Score: Golden Globe-Winning Composer of ‘RRR’ M. M. Keeravani On The Power Behind ‘Naatu Naatu’ (Welcome to Notes on a Score, GVN’s interview series highlighting the composers and musicians behind some of the year’s most acclaimed films and television series.)

Hot off of his win at the Golden Globes for Best Original Song, M. M. Keeravani speaks about the power of music with pristine clarity.

This is certainly the case with “Naatu Naatu,” the bombastic musical number that turned S. S. Rajamouli’s RRR into a viral sensation and won Keeravani his first American film award. The film’s official video has over 114 million views and has been shortlisted for an Academy Award. It even inspired an impromptu dance party at a recent encore screening at the TCL Chinese Theater.

“The song has got energy and wonderful choreography,” notes Keeravani, highlighting the iconic dance moves from choreographer Prem Rakshith. “With everything put together, it takes you into a different world.”

The success of “Naatu Naatu” is just one microcosm of RRR’s fruitful groundswell of word-of-mouth during awards season. The film has been nominated for Best International Feature by several critics groups, including the Critics Choice Association. They also nominated Rajamouli for Best Director in an unprecedented signaling of the film’s widespread acclaim.

RRR marks the twelfth collaboration between Rajamouli and Keeravani, who are not only collaborators but also cousins. “Once you are accustomed to one particular director, then it’s easy for you to sail with him and deliver good products according to his requirements,” explained Keeravani. “That all happens because of the association, because of understanding.”

Despite India’s decision to not submit RRR for Best International Feature at the Academy Awards, “Naatu Naatu” is currently the frontrunner for Best Original Song. With its infectious rhythms and larger-than-life enthusiasm, the song has taken hold of the film community.

“When you listen to the song ten times, it hooks on to you. It becomes a part of you. It bags a Golden Globe award, it becomes phenomenal,” jokes Keeravani. “The human voice is very powerful, I believe in that.”

On his road to the Oscars, M. M. Keeravani spoke to the press about the inception of “Naatu Naatu,” his creative process, and why a human voice is sometimes the most powerful instrument of all.

The following interview was conducted in conjunction with Ricardo Gallegos of La Estatuilla and Steve Norton of ScreenFish. It has been edited for length and clarity. Ricardo Gallegos: “Naatu Naatu” has become a wild sensation. There are many videos on the internet where people in the movie theater stand up and start dancing along. There’s a lyric in the song that says, “The life force inside of you should dance with joy.” How does it feel seeing this lyric come to life?

M. M. Keeravani: It’s not just a song, but the scene – the things that precede the song. Unlike when you listen to the song as just audio on a CD or as an MP3, when you watch it in the movie, it makes a hell of a difference. Of course, the song has got energy and wonderful choreography. With everything put together, it takes you into a different world. The song “Naatu Naatu” left audiences in awe. That’s what happened. It’s not about just the song or just the melody or just the words.

Larry Fried: I would love to hear about your collaborative process with Chandrabose, who helped write the lyrics for this song, and S.S. Rajamouli, whose screenplay also played a huge role. How did all three of you work together on deciding what the song was going to be?

Keeravani: First, Rajamouli calls me and Chandrabose to his place and explains the song sequence and the scene, and then he puts forward his requirements. His requirements are that the song should be fast, the bridge should be high-energy, and the lyrics should talk about celebrating life and taking pride about one’s own native land. Then, based on Rajamouli’s inputs, Chandrabose came up with the “Naatu Naatu” lyric. I took the lyrics and just composed a tune. Once the tune is approved and the words are approved, Rajamouli asks for some corrections, and the corrections part took more than one month. It was a long process. He liked a few lines, he also did not like a few lines.

After one month, we locked on to the tune and words. Then, my programmers, Jeevan Babu and Siddharth, programmed the song on Logic Pro. The song was arranged by my son, Kaala Bhairava, who also happens to lend his voice along with Rahul Sipligunj. So, this has been a great effort of teamwork. Once the song was ready, it was handed over to Rajamouli for the shoot in Ukraine with the steps choreographed by Prem Rakshith.

Steve Norton: It was so fascinating to me watching the song interact with the visuals. Even tonally, there are scenes where it’s more of a dance battle with people outside, and the sound changes a little bit. It’s a little more offbeat, out of sync. From your perspective, what is it about music that connects with the soul in a different way than the visuals themselves? 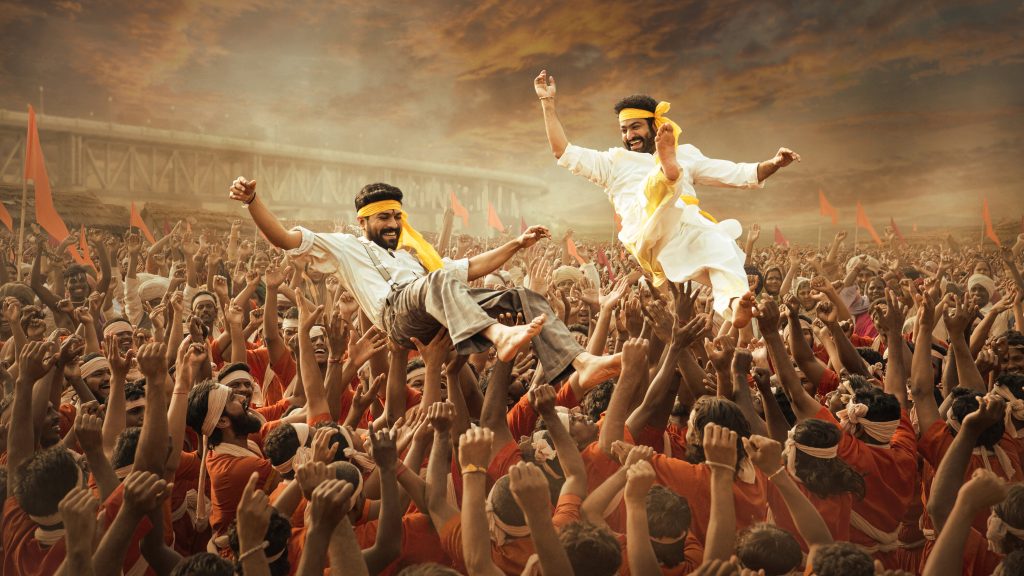 Keeravani: My uncle [Vijayendra Prasad, credited on story for RRR] has a saying about visuals and sound. The difference between visuals and sound is like going to a palace. At the first sight of the palace, it’s amazing. You’re awestruck with the richness and vastness and grandeur of the palace. Look at the chandeliers, look at the walls, look at the jewelry. You could look at the finishing touches, the carpets, the doors. “Oh my god! What is this, this grandeur?” Then you go there the next day, a second day. You are used to that grandeur. You take it easy. “Okay, I know this place. This place is familiar to me.” There is no more amazement. No more wondering. You go there casually, just like you go to your home or your office. On the third day, even more. Fourth day, fifth day, it looks very easy for you. You don’t even give a damn about the visual. The impact of the visual is going down day by day.

Gallegos: I would like to learn more about your personal process. I’ve heard that there’s some sort of influence in meditation.

Keeravani: Yeah. My most favorite instrument is piano, though I am not a pianist officially. I did not learn Western music from anywhere, so I learned Indian Carnatic music. Western music, staff notation, “do, re, mi, fa, so, la, ti, do” and all those things, I’m not very good at them. However, I am a piano-friendly man, and the piano is a friendly instrument to me. Normally my favorite scale is C major, so I start with C major and just do some pondering on the keys. It gives me peace.

Then, whatever I am looking for in a particular situation for a song, that comes to my mind and some idea strikes. It’s a chemical reaction. I cannot explain it, but what happens is a tune comes and I try to simulate the tune on the piano with my fingers, and slowly, slowly, slowly develop that to a further stage where I have other instruments coming in my way, giving body and strength to the tune.

Fried: I would love to hear about your philosophy behind the human voice as rhythm. There’s a chanting that happens “Naatu Naatu” and also in “Etthara Jenda,” a song featured later in the film. Why is it so valuable to use these percussive sounds that go beyond drums?

Keeravani: It’s a very good question, so let me tell you. When you take human shouts and phrases like that, it gives more impact than any other musical instrument. Drums are made of animal skin – goatskin, cowskin. There’s still some power there. Skin gives a wonderful sound, but vocal chords are more powerful. They can intimidate you, they can uplift you, they can soothe your mood. The human voice is very powerful, I believe in that. 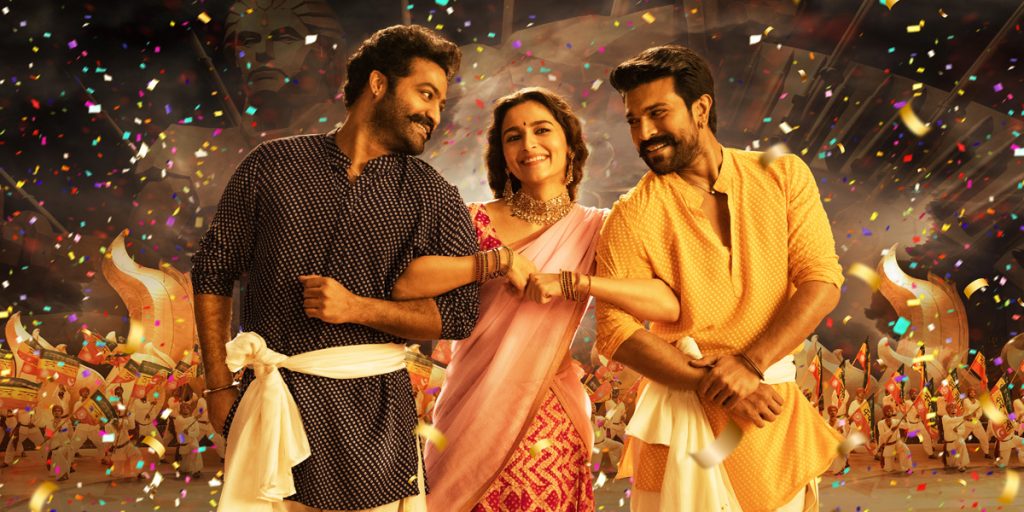 Norton: You’ve worked with Rajamouli before on a number of films and you have built relationships with many directors. Is there something you want them to understand about the role of music that’s hard for them because they’re naturally visual people? Is there something that you wish you could communicate to them?

Keeravani: Once you build a relationship with a particular director, then you’ll know about his taste, what he likes and what he doesn’t like. What are his strengths and what are his weaknesses? That’s different. Once you know them, then it will be easy for you to go ahead with the composition, because getting used to a person [is important] whether it is a director/musician relationship, a wife and her husband, or a chauffeur and his boss. Suppose I am a chauffeur. I know when to slow down the car because my boss doesn’t like it when I suddenly brake. I know about my boss. Same thing applies everywhere.

Once you are accustomed to one particular director, then it’s easy for you to sail with him and deliver good products according to his requirements. Similarly, I have had more than three to four directors in my career with whom I have had a very long association, having composed music for more than ten movies for each of them. With Rajamouli, I have done twelve movies. With Raghavendra Rao, I have composed twenty-two movies. That all happens because of the association, because of understanding.

RRR is currently available to stream on Netflix.

RRR has been nominated for three 2023 GVN Critics Choice Awards! Check out our full list of nominees here.