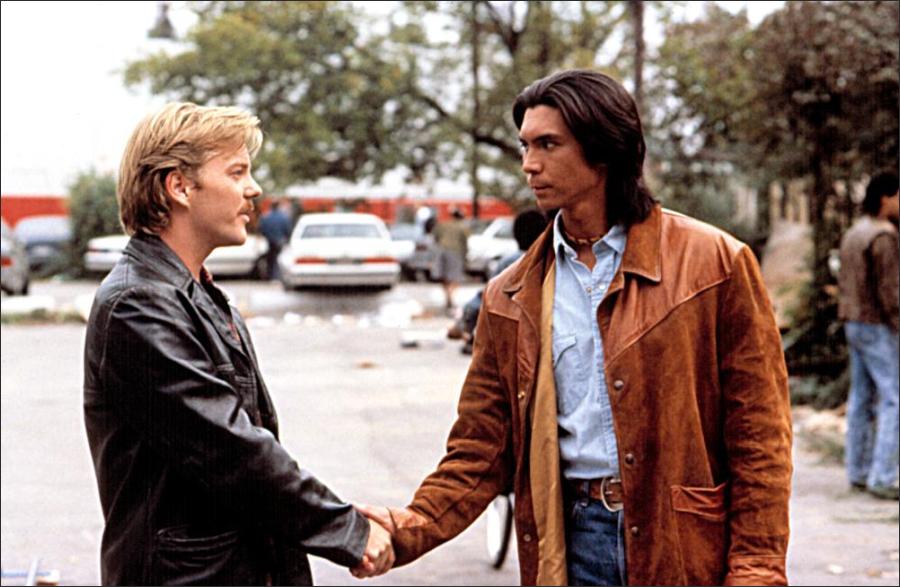 Very recently we explored what director Jack Sholder could do with a well-worn genre with his dementedly fun horror-thriller debut Alone In The Dark from 1982. It comes as welcome news that he was able to bring an assured sense of fun to the action-crime genre later in the decade with 1989’s pseudo-buddy cop film Renegades. While nothing to write home about by all measurable standards, the film reunited Kiefer Sutherland (24, The Cowboy Way) with his Young Guns co-star Lou Diamond Phillips (Stand and Deliver, Prodigal Son) for a fast-paced tale of betrayal and reluctant friendships. Although the film just barely eked out a profit and critics gave it resoundingly negative reviews, those with a soft spot for lighthearted action films that play well on cable television have come to adore this one for the mindless bit of fun that it is.

The first of the titular “renegades” is our man Kiefer Sutherland as Buster McHenry (an 80s action name if I’ve ever heard one), an undercover agent for the Philadelphia Police Department. There is corruption in the ranks, and through his efforts he hopes to expose any dirty cops. The main hiccup is that he cannot seem to stay out of trouble in the course of his investigation; he first gets arrested while trying to stop a carjacking, and subsequently he gets in with a gang of thieves who rob a jewelry store which does not exactly go off without a hitch. During the heist, an ancient Native American spear is stolen from an Auction House which leads us to our other “renegade.” Hank Storm (Lou Diamond Phillips) is a young Native American who is determined to retrieve the spear from the malevolent leader of the crew, Marino (Rob Knepper, IZombie), who assumes he can get some big money for the item. When circumstances lead a wounded Buster to be patched up by Hank, a tentative alliance eventually forms to take down the crew. 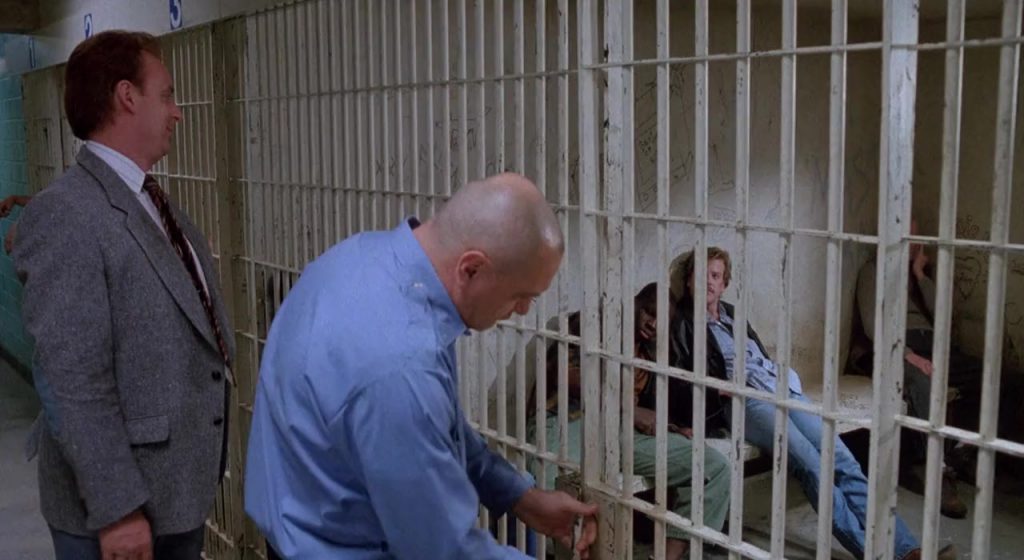 Each of these men are on the outside in their distinct ways; Buster is wanted by the same law he is trying to protect, while Hank is a cultural outsider in a White man’s world. The most entertaining portions of this film are watching the rocky friendship gradually smooth out as they get to know each other better. More than once the “lone wolf” Buster tries to shake the determined Hank as he wants to serve up justice on his own terms. There is a very fun stunt where Buster races a car in reverse down the street with his hood popped thinking he is ditching his new partner, but Hank is a cool customer just riding out of sight – Buster will learn it’s better to accept that Hank is not going anywhere. The clashing of personalities is nothing new in the genre, but Sutherland and Phillips have a really dynamic chemistry that helps elevate any deficiencies in the dialogue. It also helps that Knepper has a pretty strong personality as the villain, as well. Stock villains are easy to come by in these forgettable action films, which makes the good ones all the more memorable.

Best of all, Renegades just exudes a sense of fun at every corner. Stunt coordinator Mickey Gilbert really goes for broke during one particularly memorable car chase that leaves behind a whole mess of destruction. There are plenty of shootouts and clever exchanges that make you wonder why this one never made the cut as a more widely accepted action favorite. The story is as straightforward as any other, but it is shot very well by cinematographer Phil Meheux and moves along at a good pace so that you never find yourself checking your watch. Those who go into this picture looking for something deep will not find it, but those looking for a perfectly enjoyable action film should find that this one fits the bill nicely. 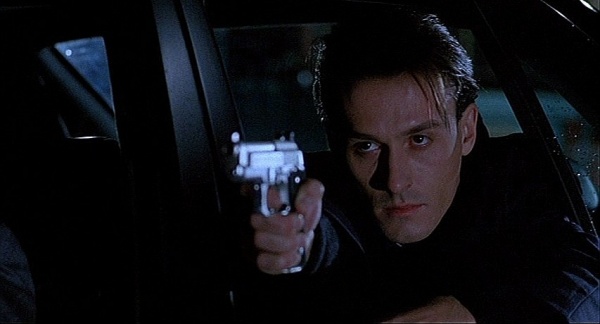 Renegades gets a pleasing upgrade on Blu-Ray courtesy of Mill Creek Entertainment with a 1080p master in the original aspect ratio. The transfer does not seem to be a new, polished-up master, but the basic high definition transfer provides natural film grain with only the occasional specks of damage or subtle anomalies. This disc is strong despite the age of the transfer. This is a film that exudes a natural color palette which this transfer shows off quite well with only minor fluctuations in saturation. Skin tones look natural, and the presentation offers up some fairly deep black levels even if delineation could be a bit better. The disc shows off some excellent details in most instances, but there are moments of softness present in some shots. Mill Creek Entertainment has provided an enjoyable transfer for a film that has been missing in action on Blu-Ray.

The film comes with a DTS-HD Master Audio 2.0 track that is quite powerful and well balanced. Environmental effects play a substantial role in the film, and this track brings these elements to life quite splendidly. Sounds always present as natural when coming from their respective points. Dialogue mostly comes through crisp and clear with only a few moments when it gets overwhelmed by competing sounds. The movie can get quite lively and bombastic, but it mostly holds together with pleasing fidelity. This movie is not a nonstop action powerhouse, but there are numerous kinetic moments and intense gunshots peppered throughout the film. Mill Creek Entertainment has delivered a solid track for a film that capably brings this journey to life. 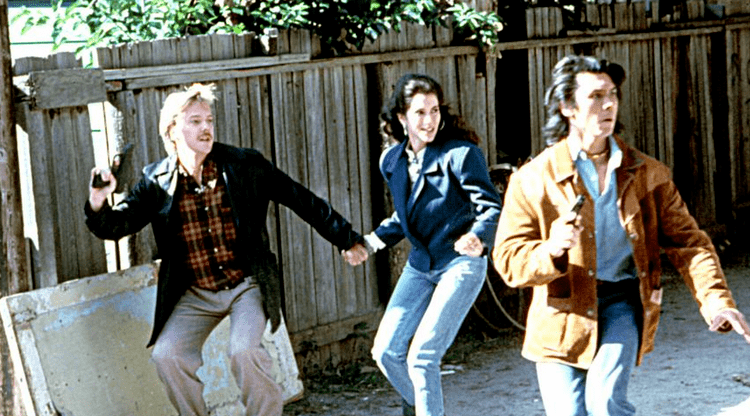 Renegades will not top anyone’s list of all-time great action films, but those who throw it on for a mindless weekend wind-down should find it quite enjoyable. The natural chemistry between Kiefer Sutherland and Lou Diamond Phillips comes through the screen with force, and Jack Sholder directs the numerous action sequences with a keen eye. Mill Creek Entertainment has given this one a Blu-Ray with a pleasing A/V presentation but not much in the way of special features. If you have a soft spot for this feature, you should feel this presentation satisfies after a long wait for it to be presented in high definition. Recommended

Renegades will be available to purchase on Blu-Ray on October 19, 2021.

Disclaimer: Mill Creek Entertainment has supplied a copy of this disc free of charge for review purposes. All opinions in this review are the honest reactions of the author.