Review: Mad Cave Studios ‘Over the Ropes’ by Jay Sandlin and Antonello Cosentino 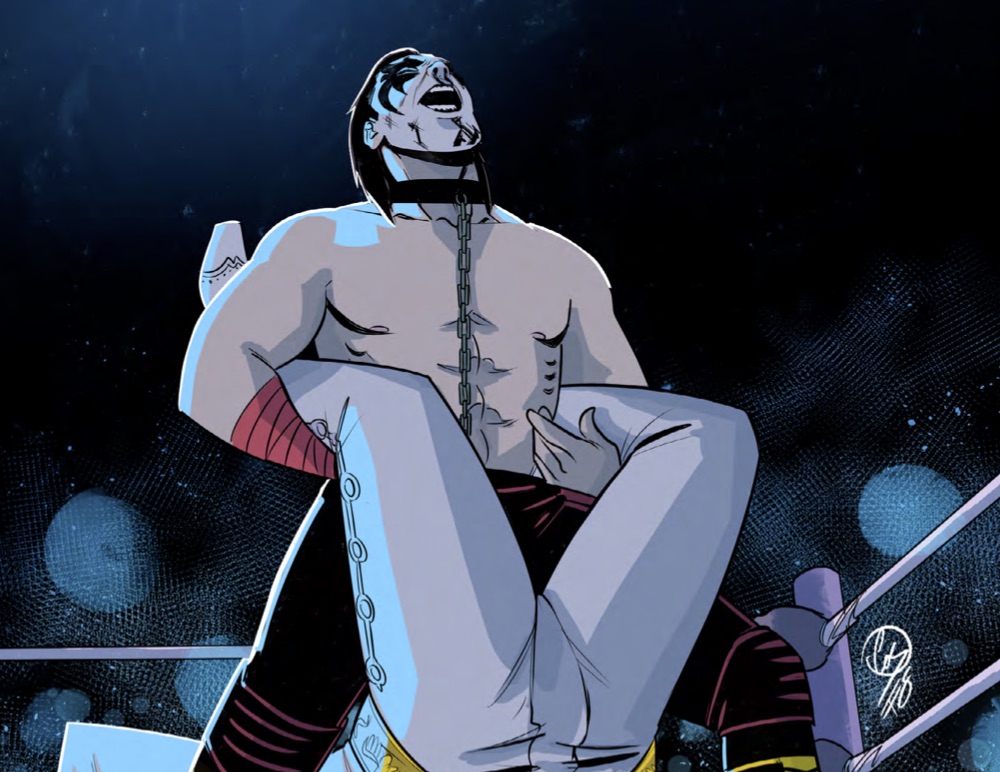 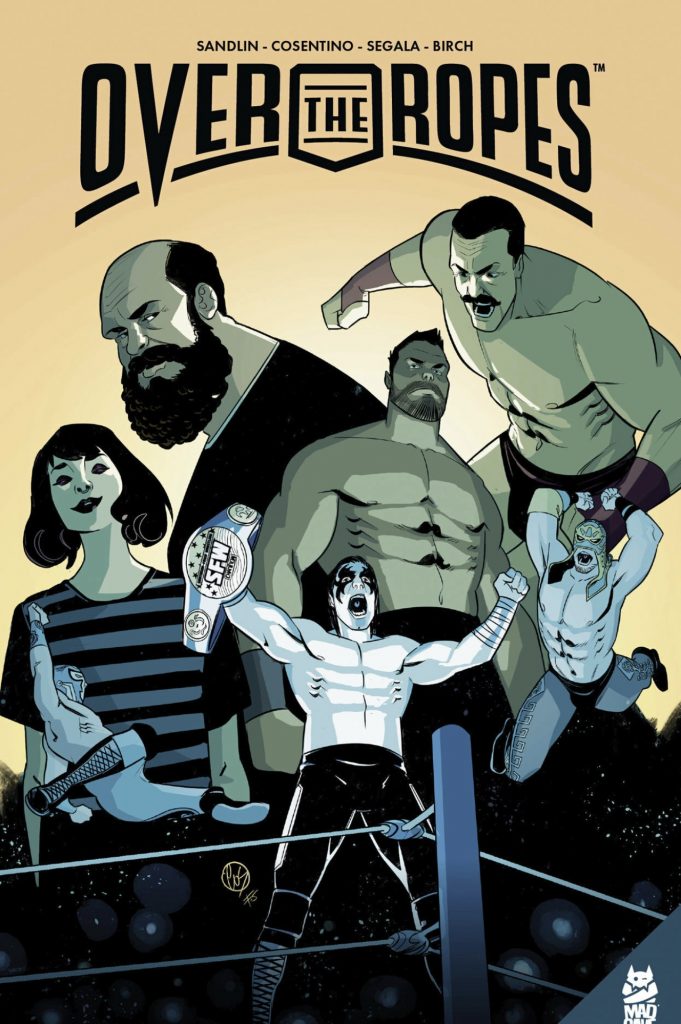 I would would be less than candid if I didn’t say that I really don’t follow pro wrestling these days. It’s not because of anything wrong with the entertainment. It still holds a fascination for me. Just not quite what it used to.

But back in the day, in the 80’s and 90’s, “Wrassling” as my mother referred to it as, had a massive hold on my imagination. Saturday’s were booked on my television. First up was the USWA or Memphis Wrestling, which was ran by Jerry Jarrett, and starred Jerry “The King” Lawler. Next came Mid South Wrestling which was ran by Cowboy Bill Watts. Finally, it was over to TBS for WCW Wrestling, ran by Jim Crockett. While I knew what was going on, it didn’t matter. I was hooked.

About “Over the Ropes“

That’s what so intrigued me about “Over the Ropes.” It was a five issue series from Mad Cave Studios about wrestling as I knew and loved it. Written by Jay Sandlin with art by Antonello Cosentino, it tells the tale of a young wrestler, trying to earn his way. This was during that time when many of the smaller organizations were trying to make a living, building their brand around a few “big name” stars. Hoping to get noticed.

And while many young wrestlers hoped they too would make a name for themselves, they soon realized they were there at the promotions good graces. Basically that meant, “Do as you are told!” For young men with big dreams, that was sometimes easier said than done. Just ask Jason Lynn.

Looking for a Break

In Over the Ropes, he works for one of those small wrestling promotions doing the grunt work. He was what some of the big name stars might call a “ham and egger.” Just there to provide a whipping boy for those wrestlers who were higher up the food chain. While that might help put food on his plate, for a young man with larger ambitions, it was torture. He knew he was better than that. He just needed a break.

But breaks are hard to come by when you’re at the bottom. Especially when the head of the Promotion has a son. A son he is grooming to be the face of the organization. The champion. No matter that his son is a first class jackass. But when you know your ticket to stardom is punched, you don’t have to worry about anything like civility. But speaking of “punched”…

An Offer He’d Better Not Refuse

Somewhere along the way, a bunch of drunken marines didn’t get the memo of how untouchable the great “Roll Tide” Billy Radison is. But that’s what happens when your mouth writes checks that your body can’t cash. However, one man’s Emergency Room visit is another man’s opportunity. Jason gets called in to Mr. Radison’s office. “Ramblin” Ricky Radison, owner of the SFW and it’s current Heavyweight Champion. (Imagine that). Jason is expecting to be read the riot act about a minor conflict with Billy in a restaurant the previous night. But that wasn’t it. This is where he learned about Billy’s fight and Radison’s plan. He had intended to let Billy take the title, but with his injuries, that plan is postponed for now. Now, he plans to let Jason get the title, but under the condition that he pretends to be Billy…and he cannot tell anyone. Basically…”Do what you’re told!”

So that leaves Jason with some choices. He can follow the company line and win the belt as Billy or he can refuse the match. On the other hand, he can take the match, but enter as himself…as the Phoenix (his chosen wrestling name). Either choice but the first one would surely put him in Radison’s doghouse…or birdcage. So what did he choose? If your familiar at all with wrestling at all, you probably could guess. I mean, what kind of drama would there be if the story followed the easy path. It wouldn’t be Over the Ropes. Sandlin knows wrestling. As to what the consequences are, I leave it to you to read the book. Fortunately for you, it is coming to Trade Paperback in August.

Part of the charm of this book is its understanding of the way wrestling worked, especially in the independent circuits. Just as in my Saturday examples, many promotions were started by former wrestlers. This gave them the avenue of trying to use what they have learned in other promotions. Perhaps even avoid some of the pitfalls they found themselves in. It also allowed them an opportunity to wrestle, if they wanted to. However, if you wanted to join their promotion, you needed to follow the plans they lay out. Otherwise, you may not be there for long. But if you can garner enough attention, create enough POP, you might find an opportunity to either push the promotion or perhaps yourself into a bigger Market. That is the dream.

It doesn’t take a lot of imagination to see nods to former pro wrestlers. Phoenix himself resembles a young Sting. Barbwire could be a number different wrestlers including a thinner Earthquake, or Haystack Colhoun (Pulling from way back now). Ricky and Billy Radison could be Eddie Graham and his son Mike from Florida Championship Wrestling (Just throwing names out now). As for Buddy Peacock, I’ll leave it to you to decide…Woooooo! Artist Cosentino captures the action with flair (pun intended) and a fine attention to the details, especially the high flying wrestling moves. I also like how the muted colors during the matches gives it an almost nostalgic look. Like you’re watching your favorite wrestling tape on VHS for the millionth time. (Funny how those matches end the same way every time). 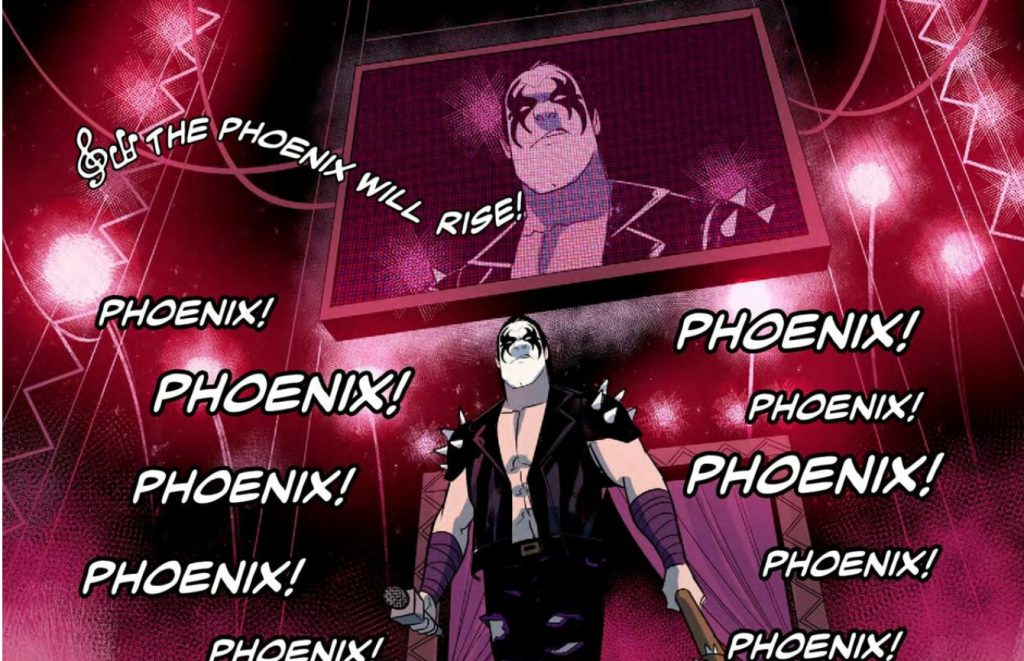 So if you’re a fan of 90’s wrestling, the action, the infighting, and the business of the ring then Over the Ropes is for you. Especially now that you can purchase the full five issue series in the one book, coming in August. If you have already read the series, let us know what you thought, here at Geek Vibes Nation.