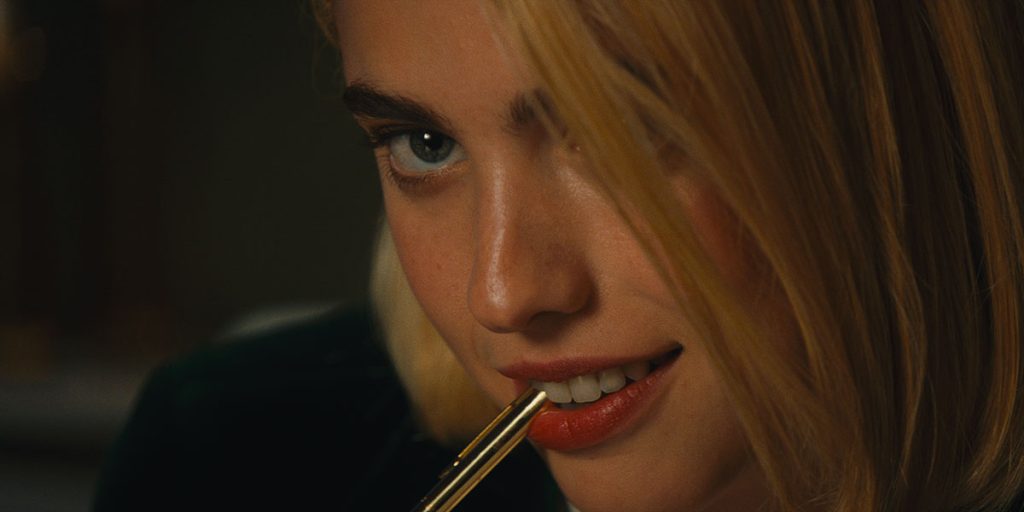 They say that everything is about sex except sex, which is about power. By the transitive property, that makes everything about power. Even our closest, most loving relationships are ultimately dictated by delicate power balances. When one person intends to upset the balance, perhaps in a scenario in which it is unclear who holds more power over the other, you can expect a reckoning. Sanctuary understands this principle and takes it to its extremes in one of the year’s most sizzling and spectacular films.

This first scene is a sardonically funny role reversal that gives us what the film’s synopsis promises, but it’s also the only time where it feels like the roles are reasonably clear cut. It plays with the audience’s expectations, but only enough so as to provide a foundation for what’s to come. Over the course of the film’s brisk 96 minute runtime, director Zachary Wigon and writer Micah Bloomberg blur fantasy and reality so vividly that you’re never quite sure what’s real, what’s not real, or even what is, period.

Take the very next moment of the film, in which Rebecca takes off her blonde wig and proceeds to share a room service dinner with her client. Certainly not the dynamic one expects from a professional, business relationship. Hal even gives her an expensive watch as a thank you gift. There’s a camaraderie here, one that is about to be unfortunately upended. See, that watch is not just a thank you gift. It’s a parting glass.

Hal’s script was partly based in truth: he is on the precipice of inheriting his father’s company and, hoping to avoid a potential scandal, decides to end his relationship with Rebecca. Seeing her stripped of her powers over Hal, powers that never even existed outside of their fantasies, is heartbreaking. However, as she walks away defeated, something shifts. She returns, insisting that their relationship is more valuable than Hal realizes, not only for her (after all, she needs the money) but for him. In fact, Hal would not be where he is today without her.

If Rebecca is going to be left in the dust, she won’t settle for pleasantries. “I want what I’m worth, relative to what you have.” Rebecca already excelled at exerting power over Hal, but now she has to do it without a script. Unsurprisingly, she excels at that too. What follows is a masterful turn by Qualley that already commanded your attention from the very beginning but, in this moment, ascends into something career-defining.

It’s a performance that exacts control over every moment, sensual and sadistic in equal measure. Even when it appears she is letting loose, you can feel Qualley’s precision in every choice. It pairs well with Christopher Abbott, who can’t afford to be anything but deeply vulnerable. Hal struggles to keep up with Rebecca’s power plays and Abbott plays this uphill battle skillfully, but make no mistake: this is Margaret Qualley’s movie.

The two engage in a thrilling battle of wits and wiles, a nearly single-location two-hander that defies both of these restraints. Bloomberg’s script is constantly evolving, filled with twists that are careful to reveal themselves. It’s an experience that ranges from explosive to romantic to gut-wrenchingly honest and never once disengages. Ludovica Isidori’s cinematography shoots a single hotel suite like a mini-mansion, constantly shifting lighting and composition to reflect the role reversals.

Unlike other festival favorites that have been criticized for not overcoming the adaptation from stage to screen, Sanctuary is gorgeously cinematic in every way. Even in scenes that take place in an elevator (I said nearly single-location), Zachary Wigon finds ways to convey every psychological detail in a way that’s artistically compelling but also wildly entertaining. Culminating in a hilarious final scene that wraps the film in a neat bow without sacrificing its grandiosity, Sanctuary is immaculate from literally start to finish and should be on everyone’s radar coming out of festival season.

Sanctuary had its World Premiere in the Special Presentations section of Toronto International Film Festival 2022.

Anchored by two excellent performances, dynamic cinematography, and an unpredictable screenplay, "Sanctuary" is one of the year’s best films.